It rained profusely on the front of the car windows. It was 6:03 AM, and Beyoncé was blasting through the speakers, as we drove along the empty 403 Highway from Toronto to Chicago. “Feminist”, Chimamanda Ngozi Adichie declared on the soundtrack, “a person who believes in the social, political, and economic equality of the sexes.” My friends threw their hands up in the air, as I looked and saw the US/Canada border signs ahead. A group of friends and I were heading to the INCITE! Color Of Violence Conference, where we would hear Angela Davis, Lee Maracle, CeCe McDonald, Mia Mingus, and Rasmea Odeh (among others) speak on transformative justice, carceral feminism, state violence against women, gender non-binary people, community accountability, healing, and resistance.

Here, I learned about the term ‘intersectionality’ in its birthplace - amongst scholars of critical race theory, civil rights activists, black, working class, disabled, queer, and trans PoC. Introduced by Kimberlé Crenshaw in her essay, Demarginalizing the Intersection of Race and Sex: A Black Feminist Critique of Antidiscrimination Doctrine, Feminist Theory and Antiracist Politics, the concept of ‘intersectionality’ was rooted in the lives and experiences of black women in America. Since its conceptualization in the late 1980s, the term ‘intersectional feminism’ has traveled outside the United States and outside academia.  Middle Eastern women have contributed to the popularly of the term 'intersectionality' by using it to describe their activist, feminist, and political art/work.

In the UAE, pastel pink sidewalks faded by the accumulation of dust curve around inlets of the calm blue Gulf waters. From this overlap of beauty and social tensions, a bolstering art scene has emerged: Sharjah’s Art Foundation, Dubai’s Alserkal Avenue, and Abu Dhabi’s ongoing art exhibits. Among this thriving cultural melange, many artists are pushing conversations on third culture identities, women’s rights, labour rights, and the reclaiming and the celebrating of the Arabic language. One project that caught my attention among the crowd of independent illustration and zine artists was Al Mesaha Al Amena. I spoke with the founder of the project, Amna, a self identified biracial feminist who likes to provoke societal norms. Just like my own journey with feminism, which began with a recognition at the personal level and matured into seeing discrimination in the structural and systematic levels, hers too began with what she describes as a 'selfish creative outlet':

“I grew up in the UAE, where so much is taboo. Even among friends and family you always have to revise what you’re about to say. It’s just the way it works, but it’s exhausting.”

Amna designs high contrast, bold, coloured calligraphy-based artwork printed on clothes, stickers, and postcards. One of her series is described on the project’s social media accounts as ‘nouns that plague us’. “I was thinking about nouns that are mainly reserved for women”, Amna told me, “and how so much of our lives revolve around avoiding being assigned said nouns.” These nouns are fitna* and a’ar, temptress and disgrace. Amna continued on to say that, “The word fitna always fascinated me, I find it so beautiful and sinister. 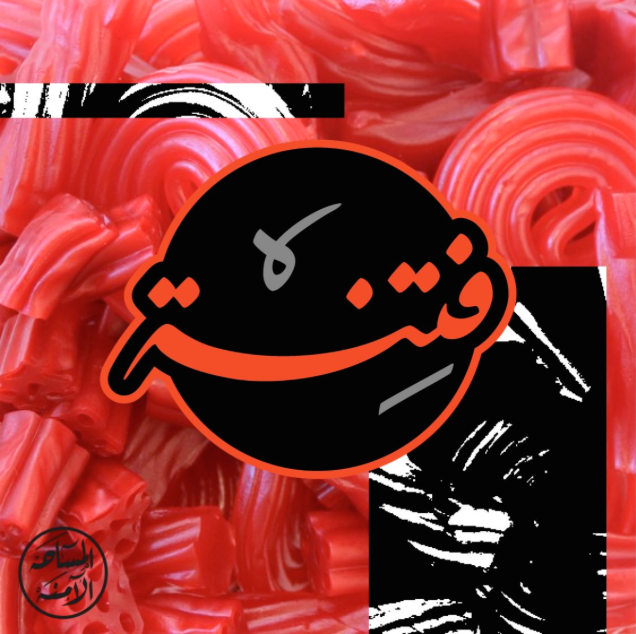 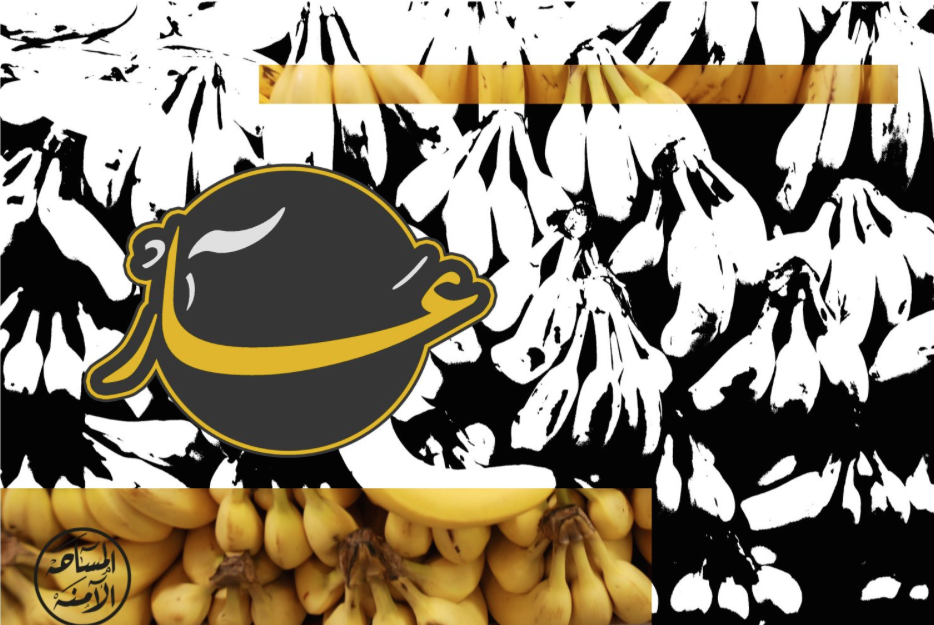 Amna also created minimalist black and white t-shirts, embroidered with the words a’athra’ and almara’a, virgin and woman. Commenting on the words she chose to put on the shirt, she told me that:

“Wearing these nouns, to me, strips them of power. They are lorded over us so often, I think we should just grab them, embroider them on cloth, and wave them at the patriarchy.” 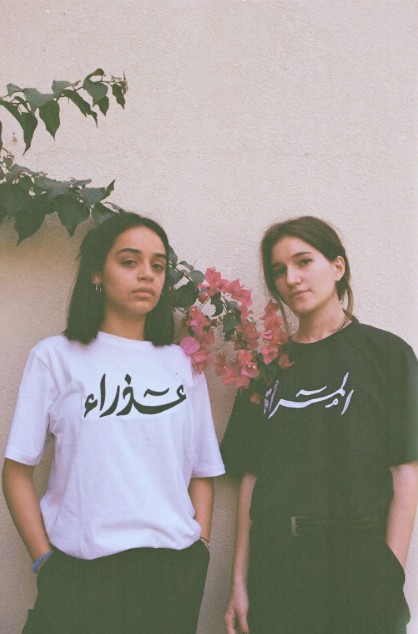 Against the tremendous and honest community expressions of love and growing popularity of her work, Amna told me that she:

“...is not an artist, but I’ve always liked having a creative outlet. Al Masaha Al Amena began as a group project where my ideas were not considered good. The group disintegrated, and out of the ashes I arose, lost and confused, with a project I had minimal input in. ... It was a laborious journey learning to believe in my ideas and 'vision', but I would like to think I did well. I was pleasantly surprised by how many supportive, beautiful people I was surrounded with, who graciously offered me their graphic design skills and critiques.”

Adjacent to Amna’s aesthetic and technical design concepts, her artwork offers a powerful feminist critique of social norms in the context of the Middle East; Amna described this to be, “...fantasizing about wild flower gardens and women's liberation”. When I asked if intersectionality found itself amongst the ideas that undertoned her creations, Amna affirmed, “Every person longs to have their many parts accepted.” I thought about what this intersectionality meant, and how it has travelled from Crenshaw’s original concept to become adopted and reapplied in these different contexts. Amna’s (and other artists and activists in the Arabic speaking world) feminism is one that is aware of, and rejects, Islamophobia and Orientalism. She asserts that, “The conversations I hope I am pushing are about women in our culture, and all the fear mongering that happens whenever women find a little more freedom or independence.” 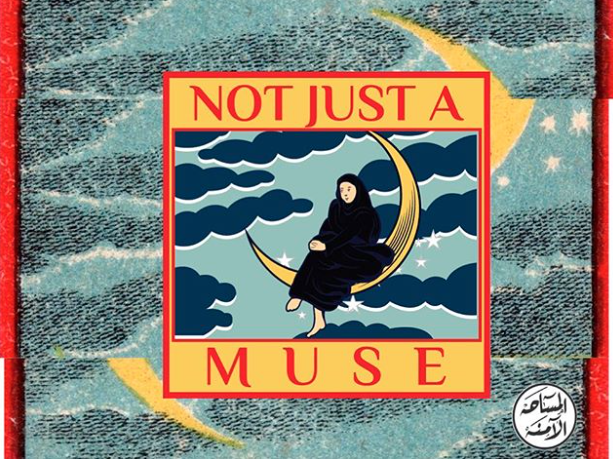 ‘Not Just A Muse’ celebrates the creative powers of a woman dressed in an abaya, throned on a crescent moon, and flying over the clouds. While a mainstream feminist would not find this dress code a legitimate portrayal of 'feminism', Amna and other artists are giving power to women’s reclaiming of their own relationships to their bodies, cultural and social realities, religious choices, and sexualities. In this sense, intersectionality in the popular usage has become synonymous with radical, non-white, non-European feminisms. 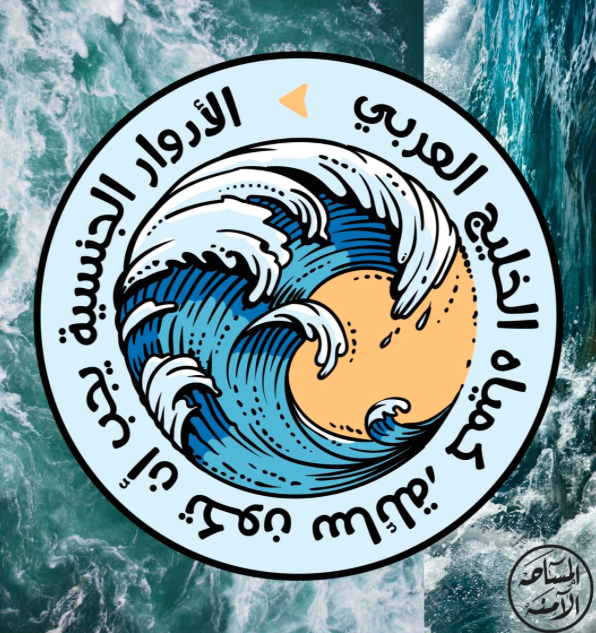 “One sticker I make that reads 'Gender roles should be fluid, like the waters of The Arabian Gulf**' is particularly popular among members of the LGBTQ community.”, Amna said. In their biography found on an online review website, Al Masaha Al Amena is described as, "Arabic for Safe Space ... hopes to make the world a safer place for our gender-neutral children to roam and riot.” While the artist does not allude to this connection, as someone living in North America, it strikes me that the idea of 'safe space', which is regularly used here to indicate a space where discrimination against LGBTQ+ people is not tolerated, is in the project’s name. The parallel is uncanny.

Amna’s work is showcased on the project’s Instagram and Twitter accounts, both of which are under the name @almasahaalamena. The project has also been featured in the art and activism review website Khabar Keslan, Issue 0, entitled Medium, and can be found here.

*Fitna is a word that is difficult to translate. Amna translates it as “temptation or sedition”.