After the explosion of 2,750 tons of ammonium nitrate at the Port of Beirut on 4 August, half of the port was completely destroyed and sections of the city adjacent to it have become uninhabitable. The explosion claimed the lives of 191 victims, a death toll not yet settled, from firefighters, port and migrant workers, to nearby residents. Several are still missing. Three hundred thousand people have lost their homes in a city already facing a severe housing crisis fueled by years of real estate speculation. Residents of this country, whose ruling class has engaged in systematic plunder, redistributing wealth away from the masses to a small sliver, now have to confront the fallout of urban destruction and further dispossession wrought by political and economic schemes planned behind closed doors.

In the midst of accumulating calamities, the significance of the port and its destruction should not be underestimated either. Almost three quarters of Lebanon’s total imports pass through the Port of Beirut, which means that the majority of goods that sustain life in Lebanon have been compromised. United Nations officials warned that Lebanon’s government holds no strategic stockpiles of grains as its most important grain silos were destroyed. As a result of sheer criminal negligence, the country’s free zones have been wiped out, its storage facilities demolished and its warehouses razed to the ground.

While corruption is touted as the primary suspect, this piece demonstrates how mismanagement, graft, and illicit activities are an institutionalized routine at the Port of Beirut. Rather than a "weak" Lebanese state unable to police and control corruption, this brief historical account of the port’s politics illustrates how Lebanon’s political class actively created and maintained the conditions for corruption and mismanagement to flourish. In effect, what took place on 4 August was no accident or simple negligence, but a crime rooted in political struggles.

Corruption and Deregulation: A Civil-War Legacy

For years, it has been an open secret that the Port of Beirut is characterized by institutional corruption and smuggling. For a ruling class as corrupt as Lebanon’s–systematically propped up by regional and international powers–it is not wholly surprising that such negligence took place, even if the scale of the disaster was unimaginable.

From 1960 to 1990, the Port of Beirut was managed by a private concession granted to the wealthy Lebanese businessman, Henri Pharaon. During the Lebanese Civil War, parts of the port were destroyed and seized by the Lebanese forces, even though Pharaon still held the concession. In 1991, when the concession expired, the Lebanese government formally took control over the port as the war came to an end, seeking to restore its status as the most important port in Lebanon–the primary gateway between Lebanon and the global economy. Initially taken over on a temporary basis, the government sought to finalize the institutional status of the port, with some politicians arguing for an extension of the previous concession, others calling for privatization, and a minority hoping to establish some form of public sector control. “It will be built anew, entirely equipped with modern material and techniques...it will become the best,” said Minister of State for Transport Affairs, Shawki Fakhoury, in 1992.[1] Six years later, customs and excise revenues, mostly from the port, proved to be the biggest contributor to the state’s coffers, accounting for 43.1 percent of total government revenues.[2] 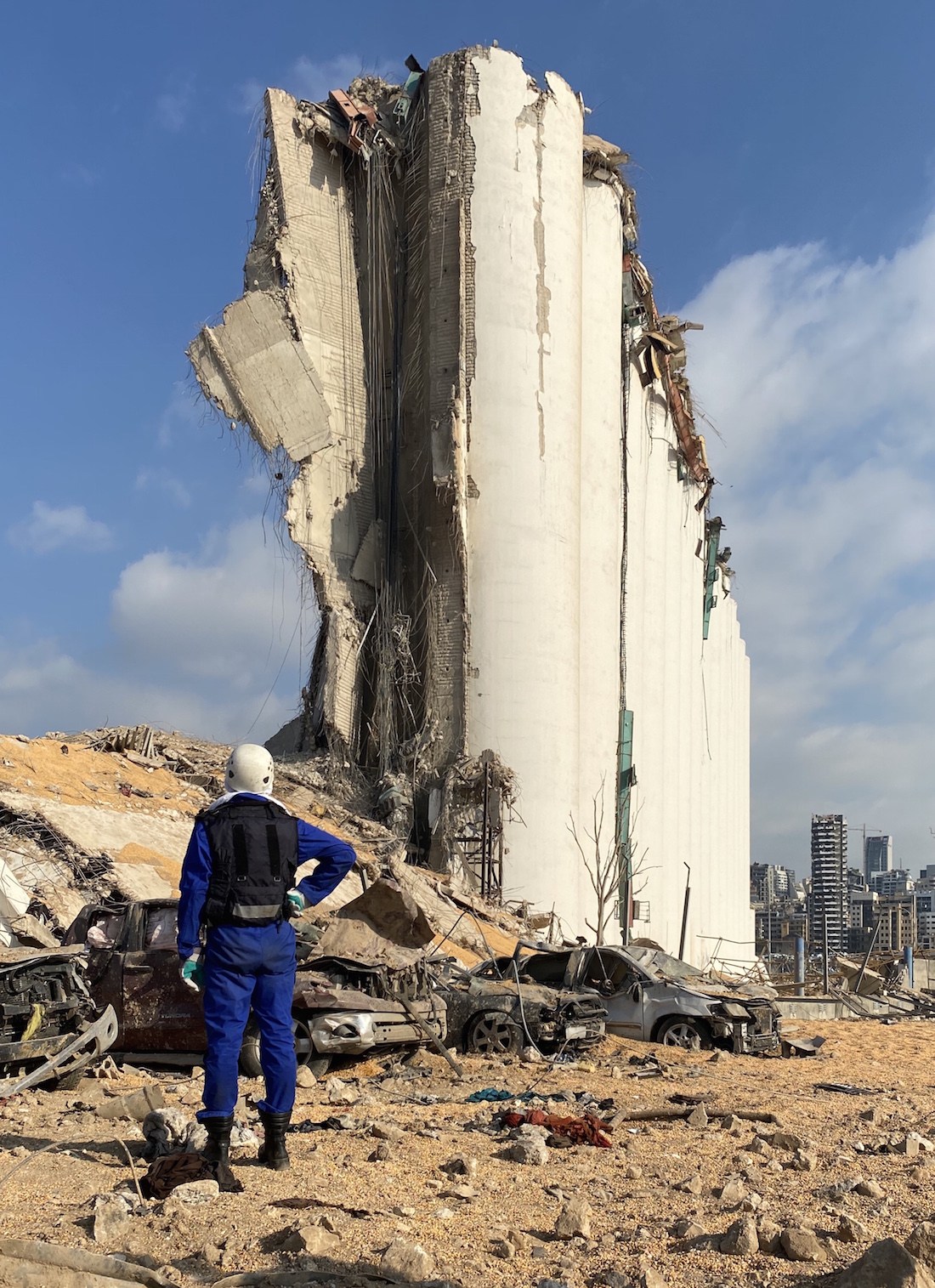 Yet for all the talk of restructuring, many of the pre-existing administrative structures and hierarchies from the previous private concession were kept in place as Lebanon’s politicians fought over the institutional future of the port. Prime Minister Rafic Hariri, for example, had been pushing for privatization while Elie Hobeika sought to extend the previous concession in order to take back control of the port from Samir Geagea. Meanwhile, the Ministry of Transport, headed by Shawki Fakhoury, an independent who had close ties with then President Elias Hrawi, and the Ministry of Energy, headed by Mohamad Yousef Beidoun, close to Salim al-Hoss, battled over which ministry the port would answer to.

To break years of political deadlock over the future management of the port, in 1993, Hariri appointed a “temporary committee” to manage the affairs of the port.[3] In order to reconcile differing political standpoints and economic interests, various contenders and political coalitions were each offered a seat on the committee. Yet the status of the committee was left intentionally unclear. The port kept its own private account at the Central Bank instead of transferring revenues directly to the Ministry of Finance, and because it was not considered a public institution, the committee’s books were never audited or made publicly available. Operating under overlapping ministerial jurisdictions and subject to competing political struggles, an institutionalized bureaucracy and regulatory supervision purposely failed to materialize.

Unsurprisingly, corruption and political patronage flourished. Numerous reports in the early 1990s noted that the port continued to function as an outlet for drugs that were produced and processed in Lebanon. Certain parts of the port were a no-go zone for Lebanese custom officials, as Syrian intelligence officials collected customs revenues and siphoned them off to Damascus. Customs officers and clearance agents would receive bribes from clients to evade taxes and to sometimes slow down cargos belonging to their competitors.[4] Cargo scanners were either bypassed or put out of commission, while safety measures were outright flouted in light of the weak regulatory mechanisms and juridical confusion. In one particularly outrageous example of corruption, the Ministry of Social Affairs granted a disability-related tax exemption for a luxury car to a three-month old child.

These political struggles to control the port, in the wake of the civil war and the ensuing temporary committee, set the stage for the institutional ambiguity and corruption that came to haunt the port. The temporary committee was never disbanded and replaced by a permanent body. Headed by Hassan Koraytem, the general manager of the port, the committee’s temporary nature often served as a convenient pretext to evade institutional accountability.

Following accusations of smuggling at the port, Prime Minister Saad Hariri said in 2019 that, “[countering] smuggling is not the task of the temporary committee, but a duty of the security services, customs and military forces.” Yet a few years prior, Koraytem himself told the journalist, Jeremy Arbid, in a 2015 interview that he did not know how to classify the port, describing it as a private company owned by the government. In evidence of institutional ambiguity, the port authority unsurprisingly withheld the transfer of revenues to the treasury for the years 2004, 2006, 2008, and 2012.

The temporary model also facilitated the brokering of deals with little oversight or democratic consensus. For example, in October 1998, just weeks before Hariri left office, it was made public that the Dubai Port Authority (now DP World) had reached an agreement with the Lebanese government to run the Beirut Port under a twenty-year contract. However, given the lack of a permanent bureaucracy, deals quickly became the object of political battles. When Selim al-Hoss was inaugurated as Prime Minister in 1998, many of Hariri’s allies at the port were expelled and replaced by allies of al-Hoss, then President Emile Lahoud, Speaker Nabih Berri, and the new Minister of Transport, Najib Miqati. Thirty-two politically connected private operators in the port demanded steep compensation for their loss of business, and by 2001, the Dubai Port Authority pulled out of the contract.[5] The final compromise was a form of partial privatization, whereby a US-UK consortium, alongside Lebanese investors and contractors with close political ties, took over the management of the container terminal and began operating it in 2005.

But in September 2019, as part of a broader set of economic reforms, the government announced its aim to scrap the temporary committee and replace it with either a private company or a public-private partnership (PPP). Citing corruption as one of the main reasons for reform, Hariri said that “we will move toward a new stage,” by “implementing reforms, adopting advanced laws and stop[ping] smuggling.” A month earlier, former Finance Minister Ali Hassan Khalil, took a surprise visit to inspect the port and lambasted the customs department, saying that “as of today, there is no [cover] over anybody’s head at customs.” According to Mohammad Chamseddine, a research analyst at the Beirut-based Information International, one to two billion dollars of government revenues is lost each year in evasion from customs duties at the port.

Whether significant progress had been made in scrapping the temporary committee remains unclear. Only five months before Hariri’s announcement, former Minister of Public Works and Transport, Youssef Fenianos, expressed “full confidence in the temporary committee that manages the port.” From 2005 to 2015, the government let the situation continue unabated as the port consistently turned handsome profits and increased revenues on a yearly basis. Only in the wake of dire economic crisis in late 2019, after a significant decline in revenues, did the government begin to take issue with the temporary committee and speak of reform in this sector. What is clear, however, is that these were anti-corruption campaigns led by the same ruling class that allowed corruption and negligence to thrive.

Following the explosion and the beginning of a government probe, many are outraged as to why 2,750 tonnes of ammonium nitrate were stored on the port after having arrived in November 2013. Customs officials said that their department had sent six letters to the judiciary demanding a solution to the problem of storage and removal. A source close to a port worker said that a team had inspected the material six months ago, warning that it could “blow up all of Beirut” if not removed.

While it remains questionable who is directly complicit, the institutional ambiguity has already ignited the blame game. In contrast to the customs officials’ claims, Interior Minister, Mohammed Fahmi, told citizens to ask customs why the ammonium nitrate was kept within reach of residential areas. Koraytem said that it had been put in a warehouse on a court order and knew it was dangerous, but “not to this degree.” In this public-private partnership model, actors take credit during times of success–but following disasters like this, the model quickly turns into a convenient tool to redirect responsibility toward the other actors. The result is a pitless blame game among Lebanon’s political elite, devoid of responsibility and accountability, let alone justice.

Given the institutional framework of the port, the issue of overlapping ministerial jurisdiction, and competing political struggles over its management, the question of criminal negligence cannot be simply reduced to an individual affair. The entire system, constructed by the ruling class since the end of the civil war, is culpable. Corruption, safety violations, and even incompetence are not simply aberrations, but the expected outcomes of these struggles for control over infrastructures of influence.

As the government places several port officials under house arrest, Lebanon’s residents realize that those who have been ruling the country for decades are equally complicit in the greatest disaster to have struck Lebanon in recent history.

[This article was originally published on The Public Source as part of their (Dis)order Report Series on 22 September 2020.]