The Cross CUNY Working Group Against Racism and Colonialism presents

Reckoning with Colonialism: Anti-Racist Struggle at CUNY & Beyond

Panel Two, 7:30-9:00pm: Anti-Racist and Anti-Colonialist Struggles at CUNY and Beyond

The Cross CUNY Working Group Against Racism and Colonialism is proud to present a two-panel symposium, Reckoning with Colonialism: Anti-Racist Struggle at CUNY & Beyond. A distinguished group of scholar-activists, including Roxanne Dunbar-Ortiz, Noura Erakat, Johanna Fernández, and Alexandra Moffett-Bateau will lend their expertise on global struggles against racism and colonialism and draw connections with local struggles within CUNY and the Professional Staff Congress (PSC). Too often, discussions of settler colonialism are side-tracked by those who claim the realities are “too difficult for non-experts to understand,” or that discussions of colonialism and racism must involve “multiple perspectives.” But taking up an anti-colonial perspective means insisting that the only two “sides” in the struggle against racism and colonialism are complicity or resistance. Reckoning with Colonialism is a call to begin advancing a truly anti-colonialist perspective at CUNY.

In the first panel, “Palestine Solidarity, Anti-Colonialism, and Labor Unions: Myths and Realities,” speakers will advance the discussion prompted by the FAQ on “Palestine and the PSC” that the Cross CUNY Working Group Against Racism and Colonialism developed in response to the PSC-CUNY Resolution in Support of the Palestinian People. Topics include: the US as a settler state with a long history of antagonistic relationships to Indigenous Nations; BDS as an anti-racist and anti-colonial movement; the role of unions in international struggles against racism and colonialism; and student-centered perspectives on the relationship between a CUNY education and state violence at home and abroad.

The second panel, “Anti-Racist and Anti-Colonialist Struggles at CUNY and Beyond,” furthers the discussion of settler colonialism by defining social justice as a CUNY-specific matter. Speakers will draw upon the long history of social justice organizing at CUNY and throughout New York City, as well as contemporary anti-racist and anti-colonial activism by students, staff, and faculty at CUNY, addressing four distinct global struggles against colonialism: historical and contemporary anti-racism and anti-colonial solidarity at CUNY since the 1960s; connections between Palestinian liberation and Black Politics in the US; parallels between settler colonial rule in Kashmir and in Palestine; and deconstructing the settler colonial logics in our current discourse around race, Latin America, and immigration.

Reckoning with Colonialism: Anti-Racist Struggle at CUNY & Beyond  kicks off a month of teach-ins related to social justice, anti-colonialism, and anti-racism at CUNY and beyond. The symposium and teach-ins are organized by the Cross CUNY Working Group Against Racism and Colonialism, a collection of conscientious CUNY staff, faculty, students, PSC union members, and activists committed to anti-racism and ending settler colonialism. Please contact us at NoRacismCUNY@protonmail.com for more information or to join the struggle.

RSVP for Reckoning with Colonialism: Anti-Racist Struggle at CUNY & Beyond here: http://tiny.cc/sep2cuny

Share the event on Facebook
Help us promote this event by sharing materials in our Media Kit.

Suzanne Adely is a labor and community organizer and human rights attorney who has worked in New York, Chicago, Egypt, India, and other locations on a spectrum of labor and human rights initiatives. A graduate of CUNY School of Law, she is President-Elect of the National Lawyers Guild and Co-Director of the Food Chain Workers Alliance (FCWA), a coalition of 33 worker-based organizations organizing at the frontlines of the food supply chain in the U.S. and Canada. She is the founder of the Global Worker Solidarity Network, a social media site that has facilitated bottom-up support for worker campaigns around the globe. She is the co-chair of the International Labor Justice Working Group and International Committee of the National Lawyers Guild, bureau member of the International Association of Democratic Lawyers, and a long time Arab-American community organizer. She has also worked as a civil rights coordinator with Desis Rising Up and Moving (DRUM) in Queens, NY, and a legal worker with the Arabic Network for Human Rights Information (Cairo). Suzanne is the daughter of Jordanian workers and grew up in Yonkers, New York. For 10 years, she worked as a high school teacher in New York City and Cairo. She is a long-time member of Al-Awda-NY, the National Lawyers Guild, and the Defend the Egyptian Revolution Committee of New York.

Huma Dar is an Adjunct Professor of Critical Studies at the California College of the Arts. Dar's paternal family was ethnically-cleansed from Kashmir in 1948/49 for their politics supporting the Kashmiris' right to self-determination, and maternal family—exiled from Kashmir after accepting Islam during the Dogra regime—fought for Independence from the British. With an interdisciplinary background in South Asian, Film, and Gender Studies, Dar’s work is focused on the intersections and co-formations of race, religion, class, caste, gender, sexuality, and national politics of South Asia, centered on intellectual and political activism for social justice, especially in Indian Occupied Kashmir. Dar is a founding member of the Working Group on “Muslim Identities & Cultures,” based at the Center for Race & Gender and the Townsend Center, and organized the feminist conference, Boundaries in Question on the theme of “Women and War,” both at UC Berkeley.

Roxanne Dunbar-Ortiz is professor emerita of Ethnic Studies at California State University, East Bay. She has been active in the international Indigenous movement for more than four decades and is known for her lifelong commitment to national and international social justice issues and her work as an anti-colonial activist. She is the author of twelve books, including An Indigenous Peoples’ History of the United States, which received the 2015 American Book Award, and the just-published Not “A Nation of Immigrants”: Settler Colonialism, White Supremacy, and a History of Erasure and Exclusion (Beacon Press, 2021). She was awarded the Lannan Cultural Freedom Prize in 2017.

Noura Erakat is a human rights attorney, Associate Professor of Africana Studies at Rutgers University, and non-resident fellow of the Religious Literacy Project at Harvard Divinity School. Noura is the author of Justice for Some: Law and the Question of Palestine (Stanford University Press, 2019), which received the Palestine Book Award and the Bronze Medal for the Independent Publishers Book Award in Current Events/Foreign Affairs. She is co-founding editor of Jadaliyya and editorial board member of the Journal of Palestine Studies. She has served as Legal Counsel for a Congressional Subcommittee in the US House of Representatives, as Legal Advocate for the Badil Resource Center for Palestinian Refugee and Residency Rights, and as national organizer of the US Campaign to End the Israeli Occupation. Noura has also produced video documentaries, including "Gaza In Context" and "Black Palestinian Solidarity." She has appeared on CBS News, CNN, Fox News, and NPR, among others.

Johanna Fernández is associate professor of History at Baruch College of the City University of New York and author of The Young Lords: A Radical History, recipient in 2021 of the New York Society Library’s New York City Book Award and three Organization of American Historians (OAH) awards: the prestigious Frederick Jackson Turner award for best first book in history, the Liberty Legacy Foundation award for best book on civil rights and the Merle Curti award for best Social History. Dr. Fernández’s 2014 Freedom of Information Law (FOIL) lawsuitagainst the NYPD led to the recovery of the "lost" Handschu files, the largest repository of police surveillance records in the country, namely over one million surveillance files of New Yorkers compiled by the NYPD between 1954-1972, including those of Malcolm X. She’s also the host of the morning show A New Day at 99.5 FM in New York on Pacifica’s WBAI, M-F, 7-8am.

Nerdeen Kiswani is a Palestinian organizer from New York City. She is the founder and chair of Within Our Lifetime - United for Palestine, a community-based Palestinian-led organization whose goal is to revitalize the revolutionary spirit of the Palestinian community abroad in pursuit of a free homeland. She is also a rising 3L law student at the CUNY School of Law, where she is the president of Students for Justice in Palestine. Nerdeen has been centrally involved in several coalitions for Palestine, speaking for the Palestinian cause at international conferences, and has organized successful campaigns on and off campus ranging from boycotting Israeli dates, to demanding accountability from politicians regarding their stance on Palestine and organizing rallies in the thousands for Palestine in NYC. Most recently Nerdeen has led efforts along with student organizers to protect Palestinian speech CUNY-wide and has received the support of CUNY Law School for doing so.

Alexandra Moffett-Bateau is an Assistant Professor of Political Science at John Jay College of Criminal Justice-CUNY. Professor Moffett-Bateau’s intellectual work focuses on race, gender, and politics, urban politics, and political behavior, with broad specialties in American Politics and Political Theory. Her manuscript in progress examines the impact spatial and aesthetic realities in residential neighborhoods have on political engagement and political identity development. Her research agenda is centrally concerned with the external forces that shape individual political capacity. Specifically, she is invested in thinking about how the intersections of race, class, and gender can make populations especially vulnerable to the spaces they live in, the conditions within which they work, and the actions of local government actors in their neighborhoods and cities. The sum total of her work argues that spatial and governmental realities can have a significant impact on the extent to which an individual can imagine political possibilities for herself or others. Environments that are violent, isolated, and toxic all function to limit the citizenship development of citizens in a way that is troubling to the functioning of democracy in the United States.

Conor Tomás Reed is a Puerto Rican/Irish gender-fluid scholar-organizer at Brooklyn College, a contributing editor with LÁPIZ Journal and Lost & Found: The CUNY Poetics Document Initiative, and a co-founding participant in Free CUNY and Rank and File Action (RAFA). Conor is completing a book, New York Liberation School, about the rise of Black, Puerto Rican, and Women's Studies and movements at the City College of New York and in New York City, as well as co-editing a quadrilingual anthology of Black Feminist Studies in the Americas and the Caribbean. 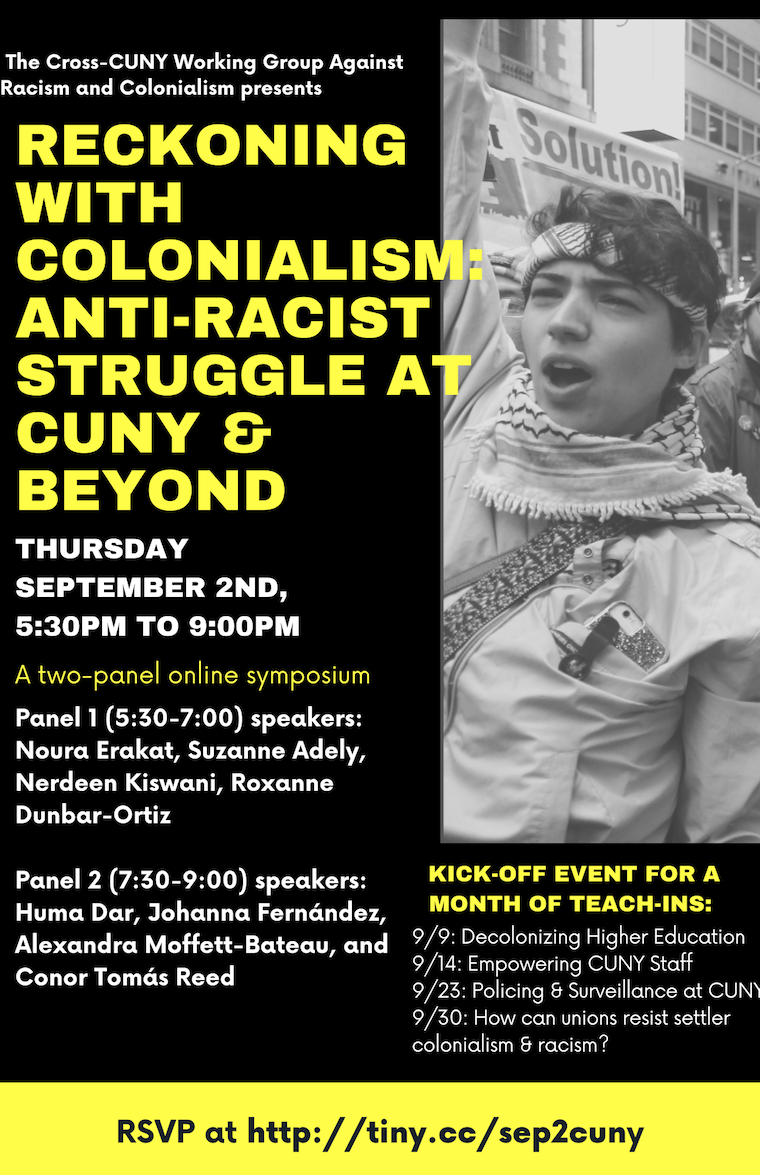