In Search of Iran’s Revolutionary Archives

[On 26 March 2021 the Centers for Middle East Studies at Harvard University and the University of California, Santa Barbara, as part of the yearlong collaborative project “Ten Years On: Mass Protests and Uprisings in the Arab World,” held a roundtable titled “Archives, Revolution, and Historical Thinking.” The persistence of demands for popular sovereignty throughout the Middle East and North Africa in the past decade, even in the face of re-entrenched authoritarianism, imperial intervention, and civil strife is a critical chapter in regional and global history. The following is one of several written contributions elaborating on the discussion addressing the relationship between archives, historical thinking, and revolution—both past and present. Click here to read the remaining contributions to this roundtable.] 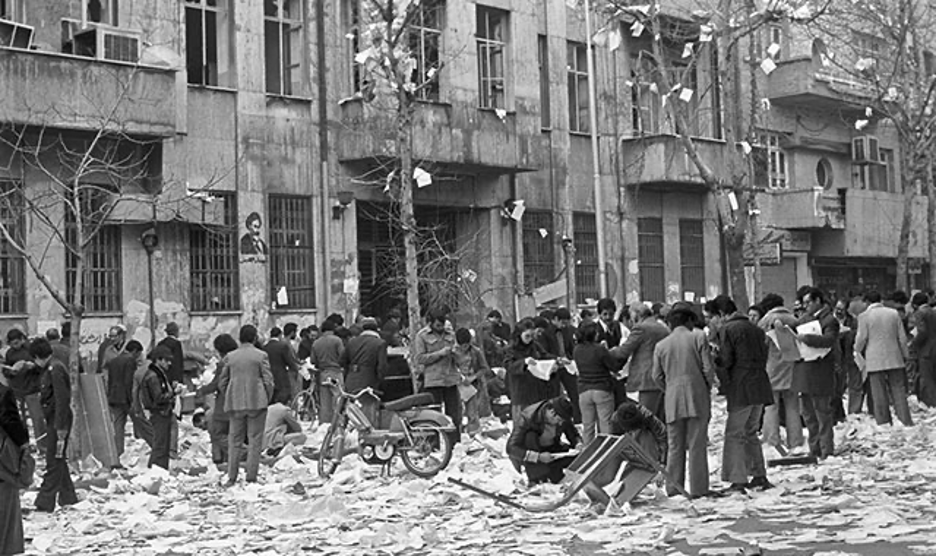 There was no snow on the ground on that cold February day. Yet in the photo, the street is covered in white. Where snow would have sat on the ground are overlapping and jumbled sheets of paper. Paper is hanging even from the bare trees in front of the building. Like many other photos of the revolution, the focus is on the people populating the frame. Yet unlike other photos, the scene is quiet; no one is talking; no one is chanting; no one is looking at the camera or at the young woman photographing them from under the bridge across the street. Everyone is looking down, head bowed, reading papers carpeting the ground. Shortly before the photo was taken, victorious revolutionaries had dumped filing cabinets containing dossiers and police reports from the second floor onto the street. “The scene was so strange. It’s like we had pulled out the guts of the [shah’s] system. Everyone was looking for something,” Javadi told me.[3] The photograph does not identify who this “we” was that had opened up the police files to the public nor what everyone was looking for, these details mattering less than the act of opening and the momentary transparency that emerged merely a day after the revolution’s official victory. In the photo, Javadi captures both the transparency and the curiosity of the crowd—and their empowerment to pursue that curiosity—towards a barely-past life that had been kept secret from them.

By 1979, there was a general belief that at any point, anyone could be informing on you. These informants could be someone standing next to you in a café, on the street, or in the grocery store. Sometimes, they would be a comrade. Reading through the published reports of SAVAK, the monarchy’s security apparatus, that fear seems both founded and unfounded. The reports contain at times trivial, at times inaccurate, and at times apocryphal rumors reported by often unnamed (though sometimes named) informants. Some are detailed: who was at a meeting, what car they drove. Some are general records of pamphlets or declarations gathered from university campuses. Others carry evidence of having been read and verified by the upper echelons of security forces using the days of the week as their pseudonyms. The head of SAVAK was Wednesday.

The scene that Javadi captured in Tehran was happening all across Iran in this post-revolutionary window. One of my interviewees, Akbar, a politically active high school senior in 1978-79, participated in the takeover of SAVAK’s Shiraz headquarters on 9 February, two days before the revolution was declared victorious in Tehran. For Akbar and his comrades, the moment of takeover and access was the real moment of the revolution’s victory. The next day, he headed further south to his hometown to do the same: “When the revolution happened in Tehran, I was part of the takeover of SAVAK in Bandar Abbas. In provincial towns, the army barracks were outside of town so if you wanted to take control of the city, you had to take control of the SAVAK headquarters.”[4]

Wresting control of SAVAK and police headquarters meant accessing one’s life as told by ordinary and not-so-ordinary people who watched and reported on neighbors, families, and passersby. For some, this access had life and death consequences. In his memoir, An Inopportune Cup of Tea, Amir Hossein Fetanat provides one such example. In the early 1970s, Fetanat had collaborated with SAVAK leading to the arrest of Khosrow Golsorkhi and Keramat Daneshian, two young leftist activists charged with plotting to kidnap the crown prince. The two men’s trial was televised; their passionate defense in court and subsequent execution in 1974 turned them into symbols of the monarchy’s injustice and heroes of the burgeoning opposition. For years, Fetanat’s betrayal was unknown until a week after the revolution, he received a call from a comrade. She warned him that with the opening of the security files, word was out that he had betrayed Golsorkhi and Daneshian, and that now, his former comrades were after him. Some students had beaten a poor man who had the misfortune of sharing Fetanat’s name and were taking him to the outskirts of Shiraz to execute him. “Do not return,” she advised. Fetanat promptly fled the country.

Shahed Tawhidi, currently a journalist in Iran, recalls that soon after the fall of the Shiraz SAVAK, he got a call from a comrade telling him that she had his security file. He took it, photocopied it, and eventually returned it to the “the place set up for the return of documents.” This minor detail is all the more extraordinary, especially as it has fallen to historical and collective amnesia. After the revolution, the provisional government set up neighborhood committees that collected caches of weapons confiscated in and around 11 February 1979, when revolutionaries broke into army barracks. But the call for the return of dossiers on oneself, neighbors, and political figures has slipped out of remembrance and historical thinking. What would it mean for our understanding of the revolution if we remembered it? What is gained in our historical thinking if we conceive of the archive not as the cohesive whole as we do today but within the temporal space between its pre- and post-revolutionary self when what was sought from archives was not the question of why the revolution happened but the minutiae of everyday life that the revolution had revealed?

The post-revolutionary state claims exclusive rights to the story of the revolution that gave birth to it. Several years after the revolution, the Ministry of Information took over and remade the SAVAK archive. Since then, it has curated and published volumes and volumes of documents based on selected topics such as the Left, the Communist Party, Qum, various provinces, and clerical figures who had been active in the lead up to the revolution. The physicality of these documents is known only to researchers with the privilege of being on the inside. For the rest, the access is mediated, particularly for scholars based in North America and Europe for whom travel to Iran, let alone conducting archival research on the revolution, has become close to impossible. This has cast doubts on what is available, doubts that have been compounded by the question of legitimacy. For some, the repressive nature of the Shah’s regime and its use of torture fully delegitimizes the information contained in these reams of bureaucratic words. For others, the Islamic Republic’s control over these documents delegitimizes the totality of the archive. The non-materiality—that we cannot touch the documents themselves—and the piecemeal nature of our access, along with the thematic curation of the published documents, means we have no way of knowing what it is that we do not have access to. The cumulative effect of these concerns has been at best, scholarly skepticism towards information taken from these documents, and at worst, their complete disregard as sources of social history and revolution, as sources of everyday lives. In insisting on the archive as a whole and not as disjointed and scattered parts, we, as scholars of revolutions, have in some ways adopted the post-revolutionary state’s imperative to reverse that moment of transparency, to seek tidiness, to value completeness, and to centralize the fragmented experience of the past. 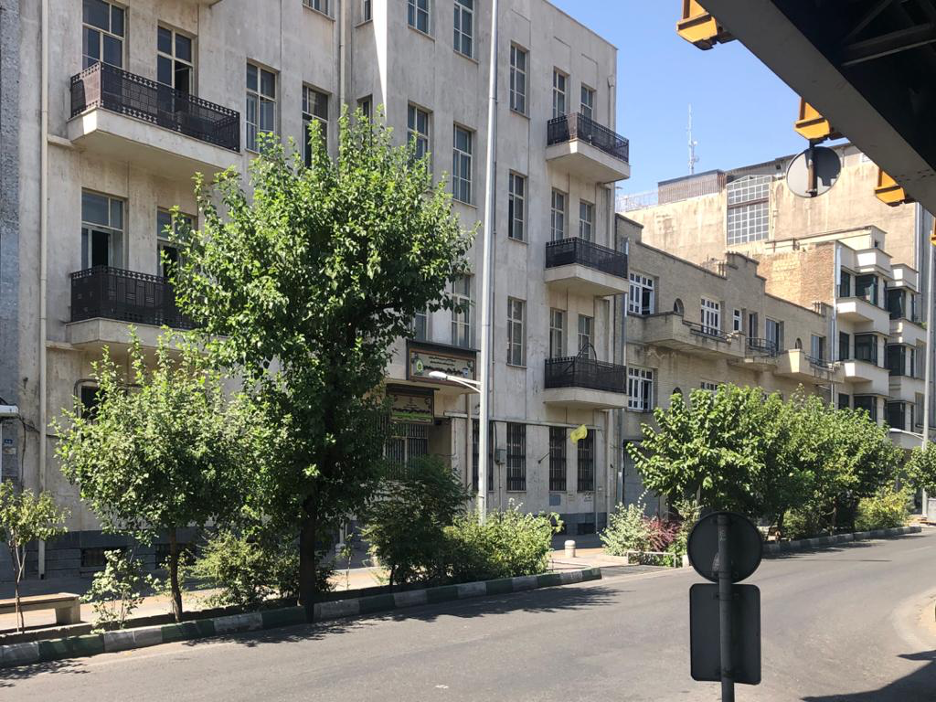 In June 2020, in the midst of the global pandemic, Javadi returned to the site of her photograph and captured it from a similar angle (Figure 2). There are no people, no papers. The building itself has been transformed with metal railings replacing the short concrete walls on the balconies from where files had been liberated. The photo, much like the one she had taken on that cold day in February 1979, stands as a metaphor for what has been lost in terms of archives, revolutions, and historical thinking. The revolution unleashed a curiosity to know about one’s own life and that of others mediated through a repressive apparatus; to remain standing in the cold, transfixed by the remarkable trivial details contained in these documents, to be open to the affective possibilities that bureaucratic life-keeping can and does hold. To write revolutions as they occurred, and not as we wish them to be, requires a return to that impulse to know, that attraction towards guts—bloody, messy, confounding—that Javadi’s photos so perfectly capture.

[1] Many of these early photographs were part of a group exhibition in Tehran, that included photographs by her husband, Bahman Jalali, and 3 others, immediately after the revolution’s victory, which then became the basis of the book Days of Blood, Days of Fire. The book was banned after two sold-out editions and was recently reprinted by Spector Books in Germany. See Bahman Jalali et al, Days of Blood, Days of Fire, with introduction by Naghmeh Sohrabi (Leipzig: Spector Books, 2020).

[2] Many thanks to Rana Javadi for providing me with a digital copy of her photograph and giving permission for its use in this piece.

[4] Interview with author, December 2015, London, UK. Akbar is a pseudonym for the interviewee.