As the world prepares to enter the third year of the COVID-19 pandemic, multiple intersecting crises that have emerged from, alongside, or with no direct relation to the coronavirus and its uneven effects seem in many ways to have settled in for the long haul. With political, environmental, and economic crises continuing to impact the lives of people living in places like Iran, Iraq, Tunisia, Algeria, and Lebanon, Status/ الوضع continues to shine a light not only on the crises themselves, but also the historical roots of current events and the ongoing acts of resistance that refuse to capitulate to oppression in its many forms. 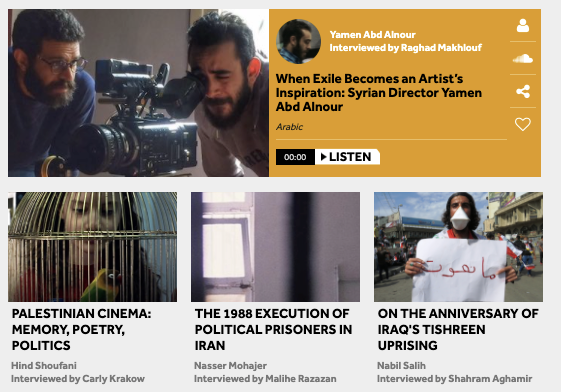 Arising out of this challenging, yet hopeful context, we are proud to announce the publication of Issue 8.3 of Status/ الوضع. It is especially exciting to be publishing our third issue in one year, for the first time since 2015, featuring 41 interviews and over 60 guests. The wealth of content produced for this issue, and over the course of this year, on the whole, speaks to the multiplicity of events facing the Middle East and North Africa, and the robust engagement and analysis to which Status/ الوضع is committed.

Whether you’re a long-time or short-time listener of Status/ الوضع, you will recognize several of the programs in this issue, such as Mouin Rabbani’s Connections, which offers timely interviews on broader policy questions, as well as themes relevant to knowledge production. This issue includes six episodes, including Lebanon in Crisis with Nadya Sbaiti; Crisis in Tunisia with Houda Mzioudet; and Focus Afghanistan with Benon Sevan.

This issue features new episodes from theMEIS Podcast, highlighting conversations with academics and administrators affiliated with George Mason University's Middle East and Islamic Studies (MEIS) department, including reflections on entering the third year of Algeria’s Hirak movement with Muriam Haleh-Davis and Thomas Serres. We also share two new episodes from Security in Context, a podcast aimed at promoting new thinking on security from a global perspective. In this issue, the team covers the role of white feminism in narratives around the invasion of, and withdrawal from, Afghanistan, and the uneven socio-economic effects of COVID-19.

We were pleased to welcome a new program to Status / الوضع in this issue: Search Files Podcast, produced by the Knowledge Production Project and Middle East Studies Pedagogy Initiative teams at ASI. It covers trends in knowledge production and pedagogy in the Middle East and North Africa, based on a constantly evolving dataset and pedagogic research. Their debut episode aired in September and features discussions with guests Wesley Grubbs and Hatim El-Hibri on data visualization of academic knowledge production and approaches to teaching films in the classroom.

We are also excited to share two programs from Maydan, an online publication of the Ali Vural Ak Center for Global Islamic Studies at George Mason University, both exploring different facets and manifestations of global Islam. On the Square is a collaboration between Maydan and Sapelo Square, an online resource that celebrates and analyzes the experiences of Black Muslims in the United States, which features lively and unfiltered conversations on a wide range of real issues from settler colonialism and the police state to the question of being Black and Muslim in the world. The eight episodes in this issue include an interview with former political prisoner Jihad Abdulmumit on the Black Liberation Movement, the plight of political prisoners, the role the arts play in the quest for freedom and self-determination, a conversation on Race, Sex, and the Ummah with sex educator Angelica Lindsey-Ali; and more.

Islam on the Edges, another new podcast from our partners at Maydan, features conversations on global Islam, highlighting themes and experiences from the geographical and other edges of Muslim thought and life. It presents Islam as a truly global religion that is not rooted in one particular region or ethnicity. All four episodes are available now on our website as part of Issue 8.3.

As always, our partners at Voices of the Middle East and North Africa, or VOMENA, have contributed several important interviews to this issue, covering current topics such as forest fires and ineffective vaccination campaigning in Algeria; reflections on Iraq’s Tishreen Uprising on its anniversary; and the situation in Lebanon one year following the massive port explosion of 2020.

Lastly (but not least!), this issue contains two Arabic-language interviews with Syrian artists: “When Exile Becomes an Artist's Inspiration” with Director Yamen Abd Alnour and On place, memory, poetry: a conversation with Syrian poet Akram Alkatreb, as part of the program In Their Own Voices: The Audio Divan of Modern Arabic Poetry, hosted by Osama Esber.

While this summary is in no way comprehensive, it should be apparent that Status/ الوضع and our partners continue to engage with a wide variety of issues and events unfolding across the entirety of the Middle East and North Africa (and beyond). Head to the issue homepage on our website to see a full list of the programs, interviews, and panels included in issue 8.3. You can also access the full archive of our content through our website, as well as on Soundcloud, YouTube, iTunes, or Spotify. Don’t forget to rate, review, and subscribe, and follow us on Twitter for more regular updates!