This issue provides rich and empirically grounded explorations of culture, history, and resistance. Arab Studies Journal is privileged to feature Pelle Valentin Olsen’s groundbreaking interrogation of the establishment of the film industry in Iraq. By identifying and analyzing the transnational and transregional circulation of capital, performers, and film technicians, Olsen offers invigorating and new geographies that greatly expand our understandings of Iraqi cultural politics, cinema in Iraq, and their contribution to filmmaking in the Global South.

We are also honored to publish a special section on the Maghrib that rethinks the territorial, cultural, and human geographies of the region. Brahim El Guabli, this special section’s editor, introduces the articles by asking, “Where Is the Maghrib?” He identifies the stakes of posing this question and engaging it critically. El Guabli provides a powerful survey of where the scholarship stands today, how the articles contained in the special section intervene in those conversations, and the importance of taking seriously the ways in which Amazigh peoples, cultures, and language are and are not engaged in such endeavors. In “The Liminal Intellectual: A Contrapuntal Reading of Abdellatif Laâbi’s Un Autre Maroc,” Sonja Hegasy explores Laâbi’s liminality between the postindependence politics of the 1960s and post-2010 popular mobilizations in Morocco. Taking her cue from Edward Said’s concept of contrapuntal reading, Hegasy reveals how Laâbi’s 2013 book-length essay explores his generation’s political aspirations in light of contemporary crises and new political formations. Carlos Cañete and Gonzalo Fernández Parrilla’s “The Maghrib in Spain: An Outer-Inner Space” explores Spanish representations of the Maghrib as both outer and inner to Spanish history and culture. They trace the production and legacies of a particular ambivalence which is primarily expressed in spatial metaphors of heterotopic nature. In “‘Collecting Bosoms’: Sex, Race, and Masculinity at the Pan-African Festival of Algiers, 1969,” Paraska Tolan-Szkilnik explores the racial and sexual tensions of the pan-African moment in writings by and interviews with attendees of this legendary festival. She anchors her analysis in the experiences and reflections of the often-overlooked and understudied Black American poet Ted Joans, alongside Black Power activists Kathleen and Eldridge Cleaver and Haitian poet Rene Depestre.

Animated by the May 2021 Palestinian “unity intifada” and Israel’s intensified bombardment of the Gaza Strip, with this issue we inaugurate a new essays section. Charles Anderson, a longtime pillar of Arab Studies Journal, commissioned and edited the articles marking this section’s debut. The section explores what Palestine, Palestinians’ relentless resistance, and new forms of political organizing on the ground might teach us. Anderson provides a piercing introduction to the context that informs the essays. The section features concise and powerful reflections by Diana Buttu, Dana El Kurd, Esmat Elhalaby, Marwa Fatafta, and Maha Nassar. Collectively, these essays and introduction point less to the much-debated causes of these events and more to their significance and meaning for Palestinians across historic Palestine and its diaspora.

Complementing the articles and essays is another robust installment of our book reviews section. The works under consideration and the insights offered by the reviewers reflect both the breadth and depth of scholarship on the Middle East and North Africa as well as Arab Studies Journal’s commitment to engaging with disciplined, interdisciplinary, and multidisciplinary knowledge production on historical and contemporary dynamics of the various geographies that constitute the field.

Introduction to Special Section: Where is the Maghrib?
Brahim El Guabli

The Maghrib in Spain: An Outer-Inner Space
Carlos Cañete and Gonzalo Fernández Parrilla

Introduction: The Fourth Gaza War and the Unity Intifada of 2021
Charles Anderson

Equality vs. Freedom: Continuity and Change in the Demands of ‘48 Palestinians
Maha Nassar

Hotels and Highways: The Construction of Modernization Theory in Cold War Turkey by Begüm Adalet
Reviewed by Koca Mehmet Kentel

Waste Siege: The Life of Infrastructure in Palestine by Sophia Stamatopoulou-Robbins
Reviewed by Moné Makkawi

Precarious Hope: Migration and the Limits of Belonging in Turkey by Ayşe Parla
Reviewed by Timothy Y. Loh

The Ottoman “Wild West”: The Balkan Frontier in the Fifteenth and Sixteenth Centuries by Nikolay Antov
Reviewed by Sanja Kadrić

The Unspoken as Heritage: The Armenian Genocide and Its Unaccounted Lives by Harry Harootunian
Reviewed by Matthew Ghazarian

Egypt 1919:The Revolution in Literature and Film by Dina Heshmat
Reviewed by Olga Verlato

The Dangers of Poetry: Culture, Politics, and Revolution in Iraq by Kevin M. Jones
Reviewed by Levi Thompson 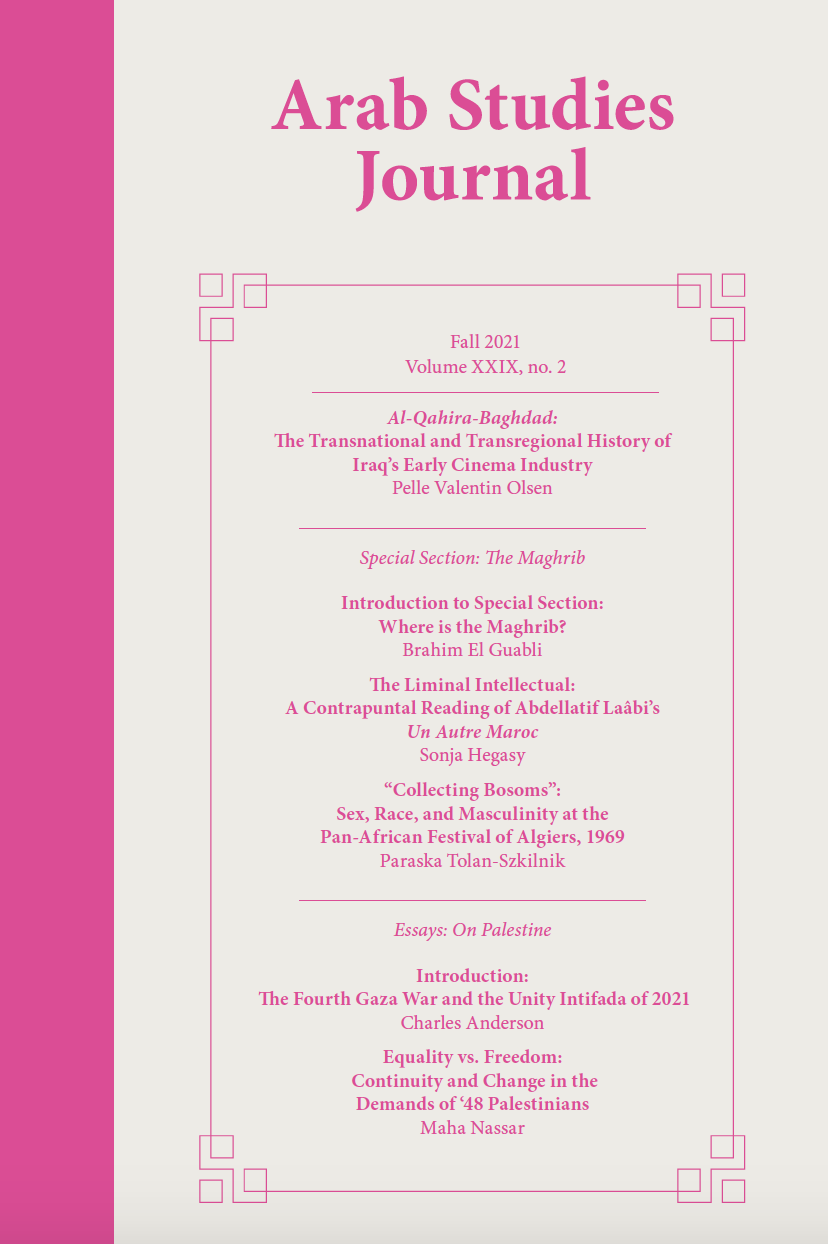