The Ten Years On Project Present

This is the ninth signature event of the
Ten Years On: Mass Protests and Uprisings in the Arab World Project

In the midst of the Lebanese ongoing financial, social and political crises, Lebanon will hold potentially its 2022 parliamentary elections next May. The legislative elections fuel the hope for change to save the country from its profound economic recession and political failure. This panel offers an interdisciplinary analysis of the electoral process with experts from different fields exploring effective approaches to challenging the status quo of the current political system.

Kamal Abouchedid holds a Ph.D. in Education from the University of Manchester, United Kingdom. He is the Dean of the Faculty of Humanities at Notre Dame University (Louaize) in Lebanon and faculty member in the rank of Professor. He is also a member of the Lebanese Association for Educational Studies (LAES). He has many publications in specialized journals as well as book chapters and regional reports. These articles and book chapters have dealt with different topics, including youth in marginalized settings.

Lina Abou-Habib (Lebanon) is the director of the Asfari Institute for Civil Society and Citizenship at AUB. She is an expert in mainstreaming gender in development policies and practices and in building capacities for gender mainstreaming in regional and international agencies as well as public institutions. Lina was a Senior Policy Fellow at the Issam Fares Institute for Public Policy and International Affairs. She is also the MENA Advisor for the Urgent Action Fund

Christy Mady holds a PhD in Communication from Carleton University, Canada and she is currently an assistant professor at the Department of Media Studies at Notre Dame University- Louaize. Equipped with a rich professional academic background, Dr. Mady’s research interests are mainly focused on Pan Arab media, journalism, and the intersection of media with the various social, socio-political, cultural, labor, and legal aspects of gender and sexuality in the SWANA region and mainly Lebanon.

Nadim El Kak is a Beirut-based researcher, freelance writer, and postgraduate student. He works at The Policy Initiative (TPI)  a new local think tank – where he leads research projects on Lebanon's growing landscape of anti-establishment actors. He holds a double B.A. in Political Science and Middle Eastern Studies from Amherst College and is completing his M.A. thesis in Sociology at the American University of Beirut. His academic research examines the tensions between (counter) revolution, neoliberal ideology, and radical political imaginaries in Lebanon’s uprising.

Maria Bou Zeid is an Associate Professor and the Chairperson of the Media Studies Department at Notre Dame University-Louaize (NDU). She is also the Executive Director of the Arab Studies Institute (ASI) - Beirut Office. Dr. Bou Zeid holds a Doctorate in Media Studies from Université Paris II, Assas, Paris. Her research interests include: Media Ethics and Media Education. She is also engaged in research on higher education in the Arab world tackling issues such as the efforts of Internationalization in the field of Higher Education in the MENA region along with the challenges that the Lebanese Education sector is currently facing. 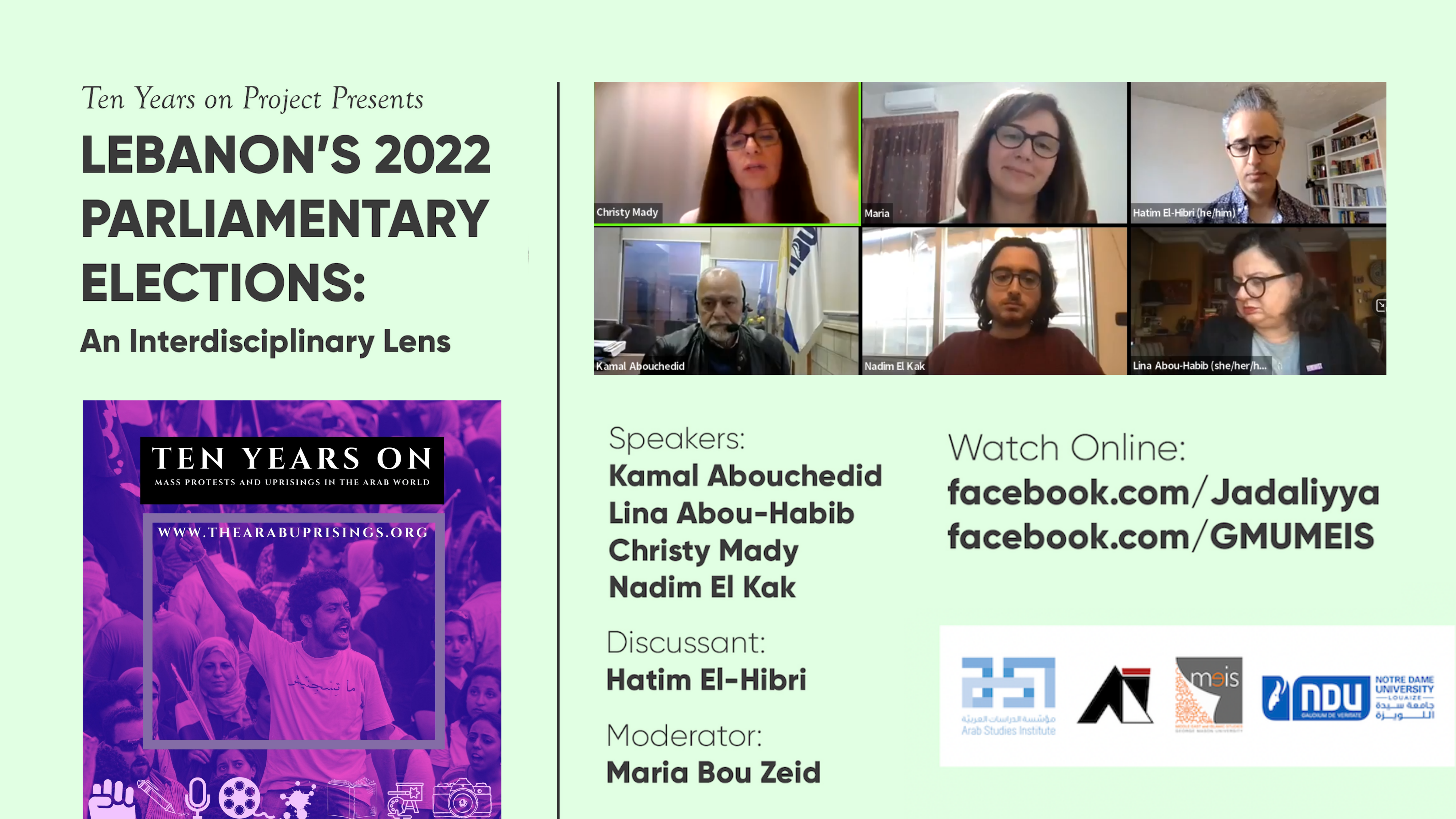