The Status/ الوضع team is pleased to share Issue 9.1 (Spring 2022) of the critical and collaborative audiovisual journal, which covers a broad range of topics related to politics, media, society, religion, and daily life in SWANA (Southwest Asia and North Africa) and their diasporas. This issue contains over 35 interviews and panels with a combined total of more than 50 guests, including activists, students, researchers, musicians, poets, authors, journalists, and others, contributed by Status team members as well as partners such as the Arab Studies Institute/Jadaliyya, Voices of the Middle East and North Africa, the Stanford Program on Arab Reform and Democracy, and the Asfari Institute for Civil Society and Citizenship at AUB. We are excited to feature a panel moderated by Noura Erakat on the Middle East Studies Association’s (MESA) vote to endorse BDS, which officially passed on March 22nd. Sherene Seikaly, Charles Hirschkind, Maya Wind and Kamran Rastegar discuss the argument for academic boycott, as well as the direct role and responsibility of the Israeli academy in the state’s racial violence against Palestinians.

From our partners at the Stanford University Program on Arab Reform and Democracy, we are pleased to share two episodes of the podcast Mofeed-19 as part of Issue 9.1. This program, hosted by Hesham Sellam and Amr Hamzawy, deals with different aspects of the impact of the COVID-19 pandemic on the Arab world. In this issue, we are featuring episodes two and three of the podcast, featuring Lina Attalah on the coverage of the pandemic in the Egyptian media and Ibrahim Nasrallah on the impact of Covid on Arab literary production (in Arabic), respectively. 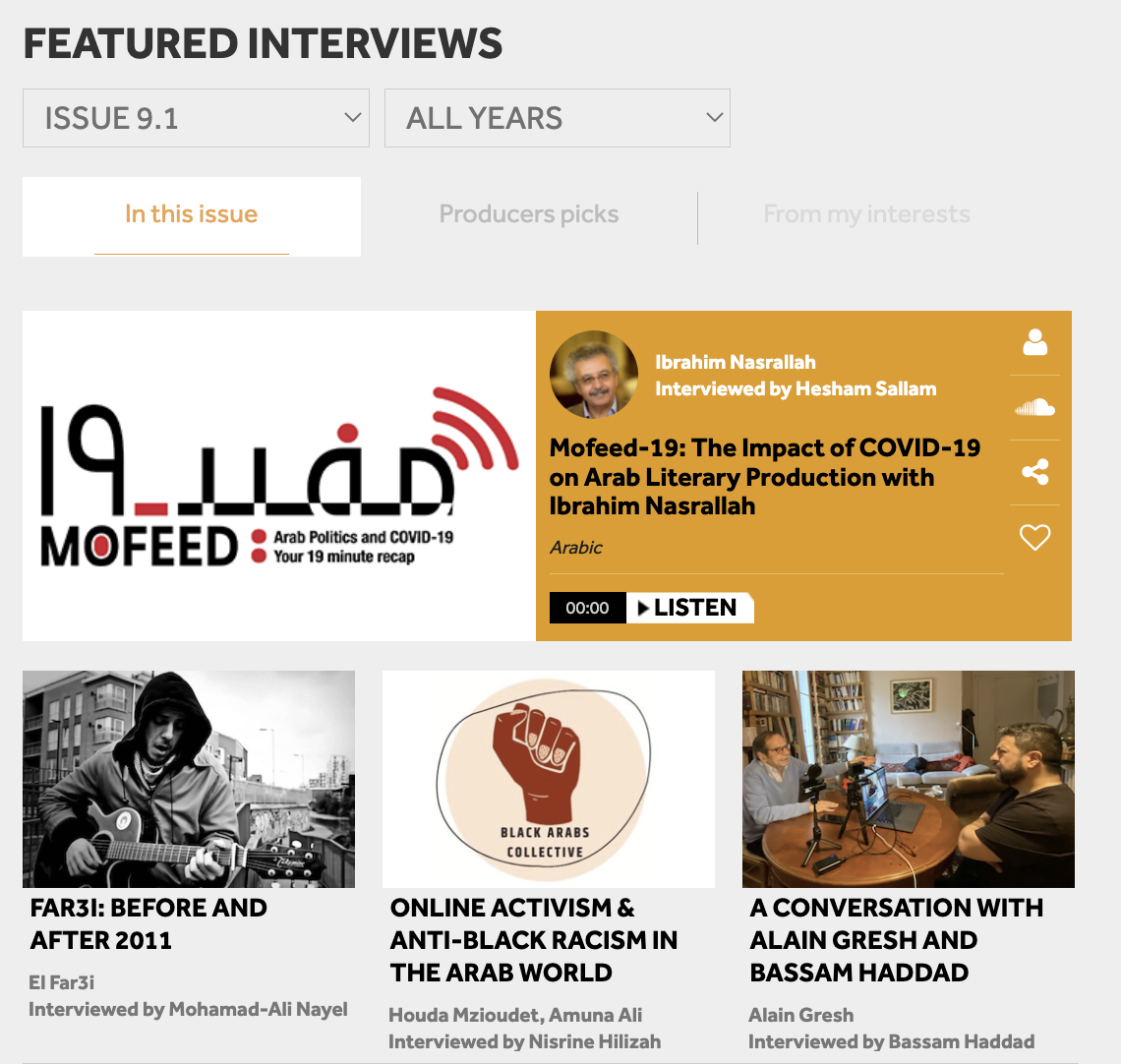 This issue also featured several episodes of the Connections program, hosted by Mouin Rabbani. Connections combines journalism, analysis, and scholarship to offer timely and informative interviews on current events and broader policy questions related to the MENA/SWANA region and beyond, as well as themes relevant to knowledge production. This issue of Status includes eight episodeswhich cover a variety of topics, including the Lasting Legacies of US Torture in the context of the “War on Terror,” the human and political and dimensions of digital espionage, and Israel’s campaign to criminalize Palestinian human defenders and civic organizations.

Issue 9.1 includes several Arabic-language interviews focused on topics related to poetry, music, and literature, including a special episode entitled When Home is Carried Within a Voice, a conversation between Raghad Makhlouf and Syrian vocalist and composer Dima Orsho about her art, education, and life, as well as the above-mentioned interview with Ibrahim Nasrallah about Arab literary production as part of Mofeed-19.

We are also excited to welcome previous collaborator and contributor Mohammad-Ali Nayel back to Status/الوضع as part of this issue, with a two-part Arabic-language interview with Palestinian-Jordanian songwriter, rapper, drummer, and producer El Far3i. This interview delves into how the wave of Arab uprisings in 2011 brought with it new sounds and musical novelties that became fixed music genres, and how these new musical acts became individual and collective experiences encompassing the whole Arab world and beyond.

This interview is one of several in the issue that reflect on the aftermath of the Arab uprisings over a decade after their eruption. Episode 17 of Connections, featuring Los Angeles Times Bureau Chief Nabih Boulos, goes in-depth on the past decade of upheaval in the Middle East. Issue 9.1 features four panels and interviews that were organized as part of the Ten Years On project, covering topics such as Activism in Exile: Diasporic Communities in the Wake of the Arab Uprisings, Media Framing of Political Events in Lebanon, and Egypt’s 2011 Uprising.

Status / الوضعhost Katty Alhayek also contributes to the Ten Years On project in an online panel discussion with prominent women Arab filmmakers Naziha Arebi, Sarah Ishaq, and Safa Al Ahmad. Continuing with the subject of film and its intersections with migration and decolonial creative processes, Katty Alhayek speaks with doctoral student from McGill University Farah Atoui, who is involved with Regards Palestiniens and Regards Syriens screening collectives in Canada.

Our longtime partner at AUB, the Asfari Institute for Civil Society and Citizenship, brings three webinars on themes relating to feminism, political struggles, and bodily agency, with a range of guests from the region. Watch these conversations here: ‘Glocal Voices: Discussing Feminist Blogging as Political Practice, Women of Afghanistan: My Voice to my Home, Feminist Circles: Dress Code and Bodily Agency.

Finally, we are excited to highlight the voices of three Georgetown students who produced their own podcast interviews on a series of engaging and important themes. These are: Nisrine Hilizah’s conversation with Houda Mzioudet and Amuna Ali on Online Activism & Antii-Black Racism in the Arab World; Aisha Jitan interviewing Dr. Samah Jabr on Siha Wa Sumoud (Health and steadfastness): Reconceptualizing Mental Health in the Context of Gaza; and guests Omar Zahzah, Rasha Anayah, and Yasmeen Mashayekh, in conversation with Nooran Alhamdan in an interview entitled Decolonizing the Digital: Weaponization & Reclamation of Online Spaces in the Palestinian Context.