On This Day: The 1982 Israeli Invasion of Lebanon

[This article is translated into English from an article published by the Jadaliyya Arabic Page Editors. Click here to read this article in Arabic.]

4 June 2022 marks the fortieth anniversary of the Israeli Invasion of Lebanon in 1982. As-Safir newspaper’s offices acted as a mirror of the situation in Beirut at the time: 40 people lived there, a symbol of the resilience of those who refused to leave the capital, resisting the shelling, the pain, the lack of food, water, and electricity—but not without hope.

On 4 August, two months into the Israeli invasion, Israel ordered Lebanese newspapers to restrain from publishing, by force.

As-Safir decided not to abide, and the “family” of 40 people decided to print in a move that turned out to be historical.

On that day, 4 August 1982, As-Safir was the only newspaper left publishing in Lebanon, running an unforgettable headline: Beirut burns but does not raise the white flag.”

The following is a glimpse into the daily news and facts of the Israeli invasion of Lebanon, as published by As-Safir, since the Israeli military aggression began on 4 June 1982.

To read the full content of the coverage of that time, click on the following link: www.assafir.com 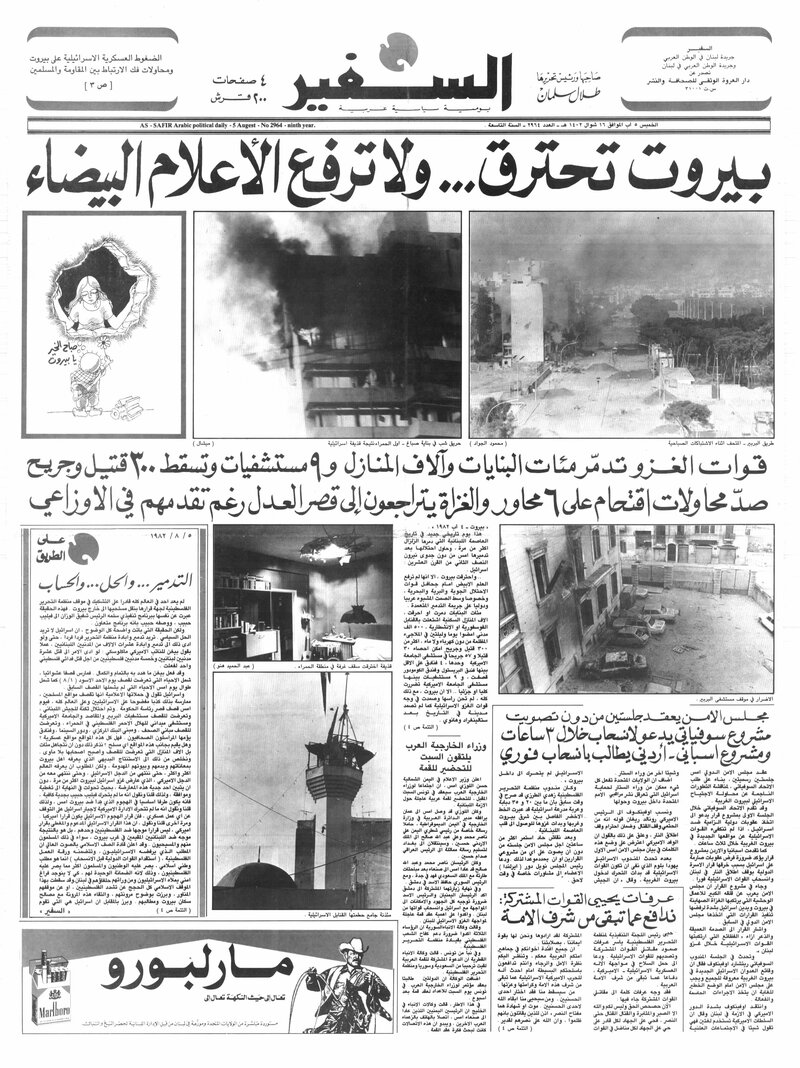 Believing in the right to resist, Assafir goes to print despite Israel’s press ban.

Main Headline: ”Beirut Burns… And Does Not Raise the White Flag”

There are two pictures of the devastation in Beirut, and one of the most known cartoons of Naji El Ali, where Hunzula is wearing a kuffieyeh, offering a flower to Beirut who appears from behind a shattered wall, greeting her saying:” Sabah El Kheir Ya Beirut” ("Good morning, Beirut").

Headline 2: "Two Sessions at the Security Council and No Votes"

Headline 3: Arafat Salutes the Common Forces: “We are Defending What is Left of the Honor of the Nation”

Editorial: "The Destruction … The Solution… The Accountability"

Footer: "As-Safir Published Despite the Israeli Ban, Asserting the Right to Resist" 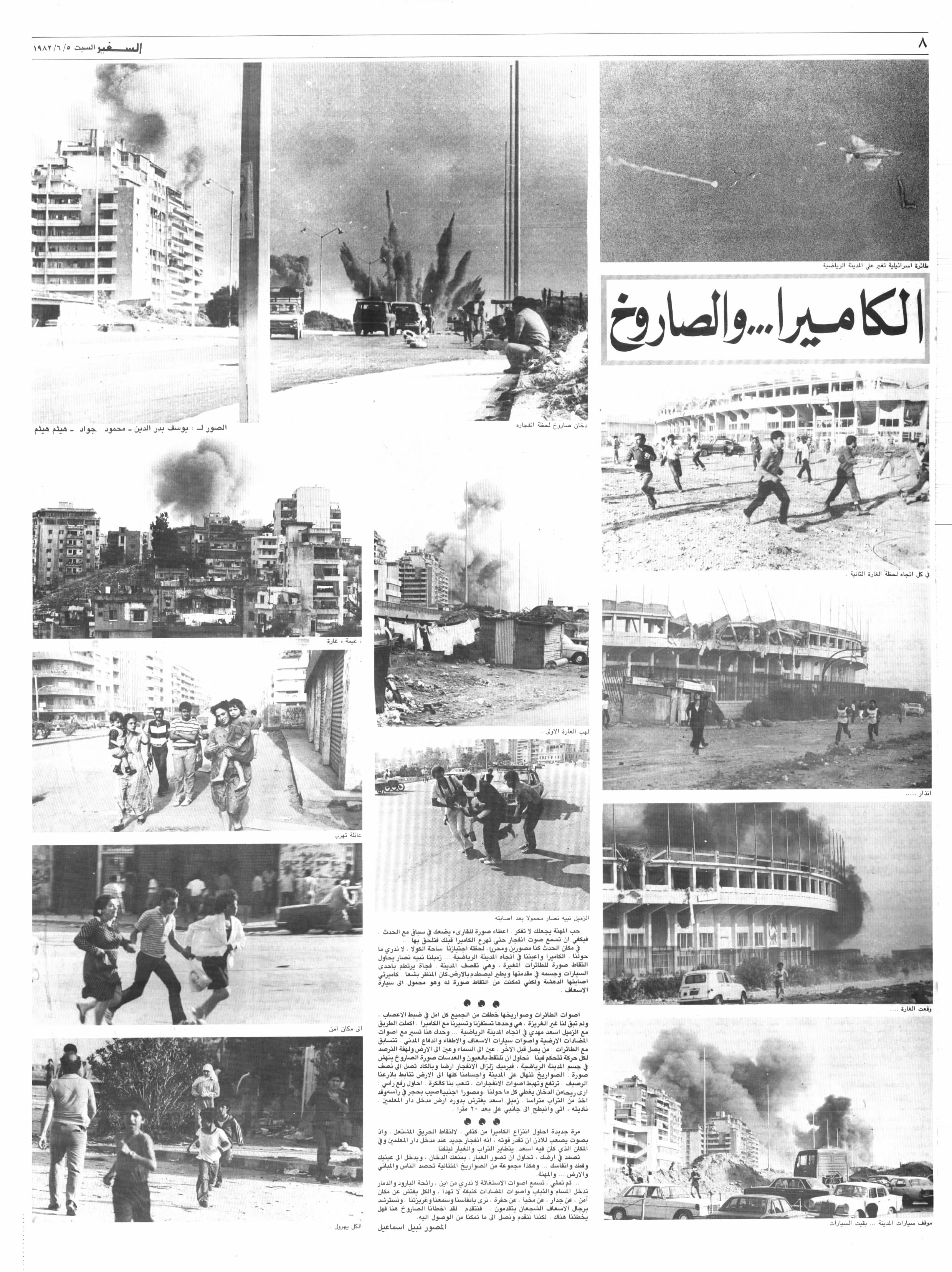 The beginning of the sweep.

Headline: "The Camera … and The Missile"

Between the pictures taken from Beirut, photojournalist Nabil Ismael writes about that horrible day. Here are some excerpts :

“Your love for your profession does not give you a chance to think. To give the reader a picture puts you in some sort of a race with the unfoldind events. It is enough to hear the sounds of bombings, and your camera runs, leading you towards it. We were 2 photographers and a reporter. When we crossed Al Cola square, not knowing what was happening around us, our cameras and eyes concentrated on the Cite Sportive, our colleague Nabih Nassar was trying to capture the raiding warplanes bombing the Cite Sportive. Suddenly, a car hit him, and his body flew before hitting the ground. It was a very painful moment but I managed to take his picture while he was taken to the ambulance…

"[….] All we had were our instincts, guiding us and our cameras. I kept walking with my colleague Assaad Mahdi towards the Cite… here, you are on your own, surrounded by the explosions, the sounds of cars, ambulances, firefighters, and civil defense vehicles. You’re racing the warplanes; one of you has to get there before the other. An eye up towards the skies, the other on the ground and, all your senses are alert, trying to capture, with your eye and your camera the picture of the missile tearing down the “body” of the Cite [………..]

"[….] Then, you walk, and you hear calls of distress that you don’t know where they’re coming from. The smell of gunpowder and devastation invades your pores, and clothes…. The sounds of bombs don’t stop. Everyone is looking for somewhere safe, a pit, to hide. …we follow the courageous paramedics of the ambulances. We move forward. One missile missed us. How about a few steps forward? But we keep moving as far as we can go….”

Footer: "The Beginning of the Invasion" 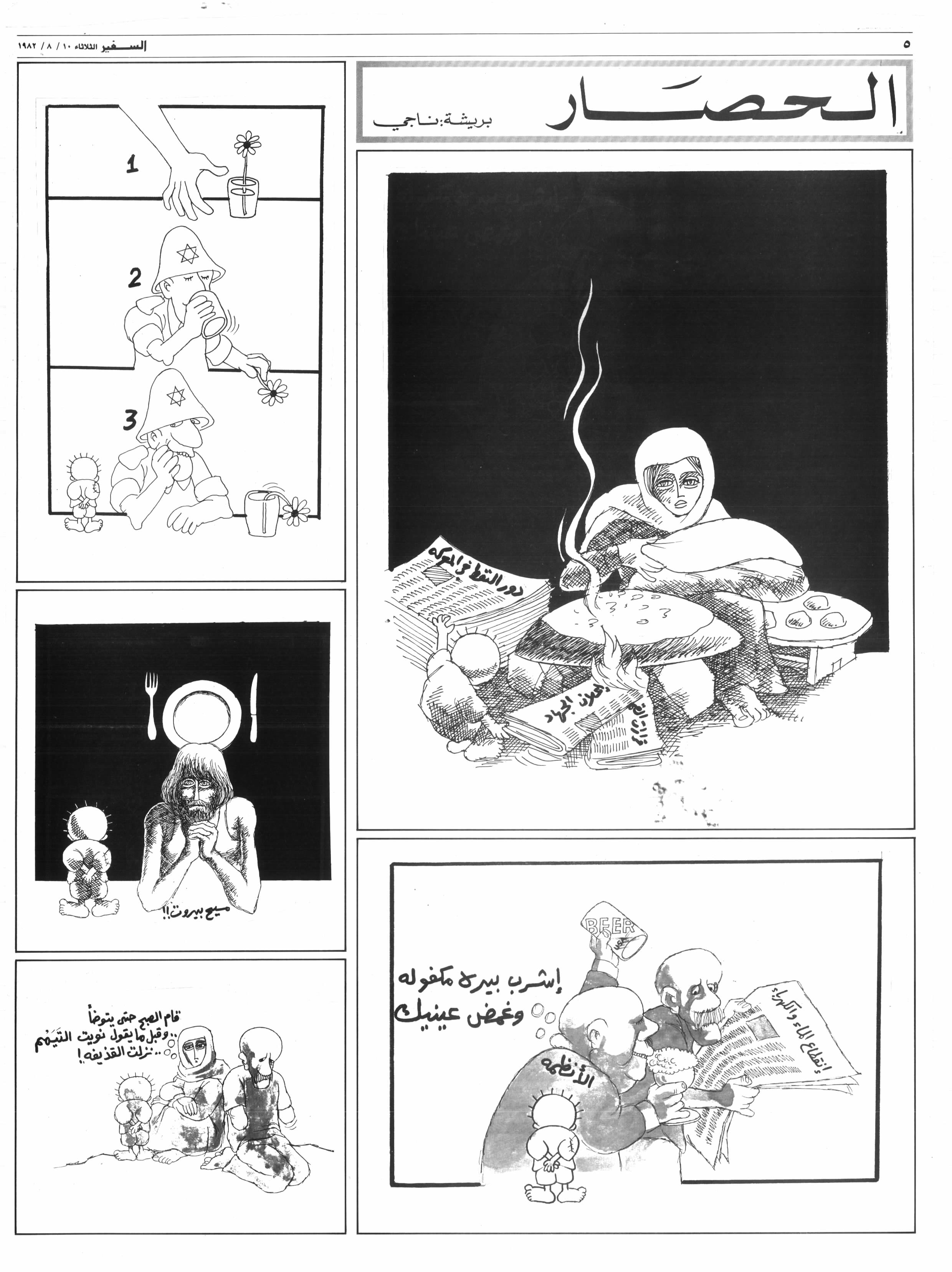 A page by Naji Al Ali entitled "The Siege" 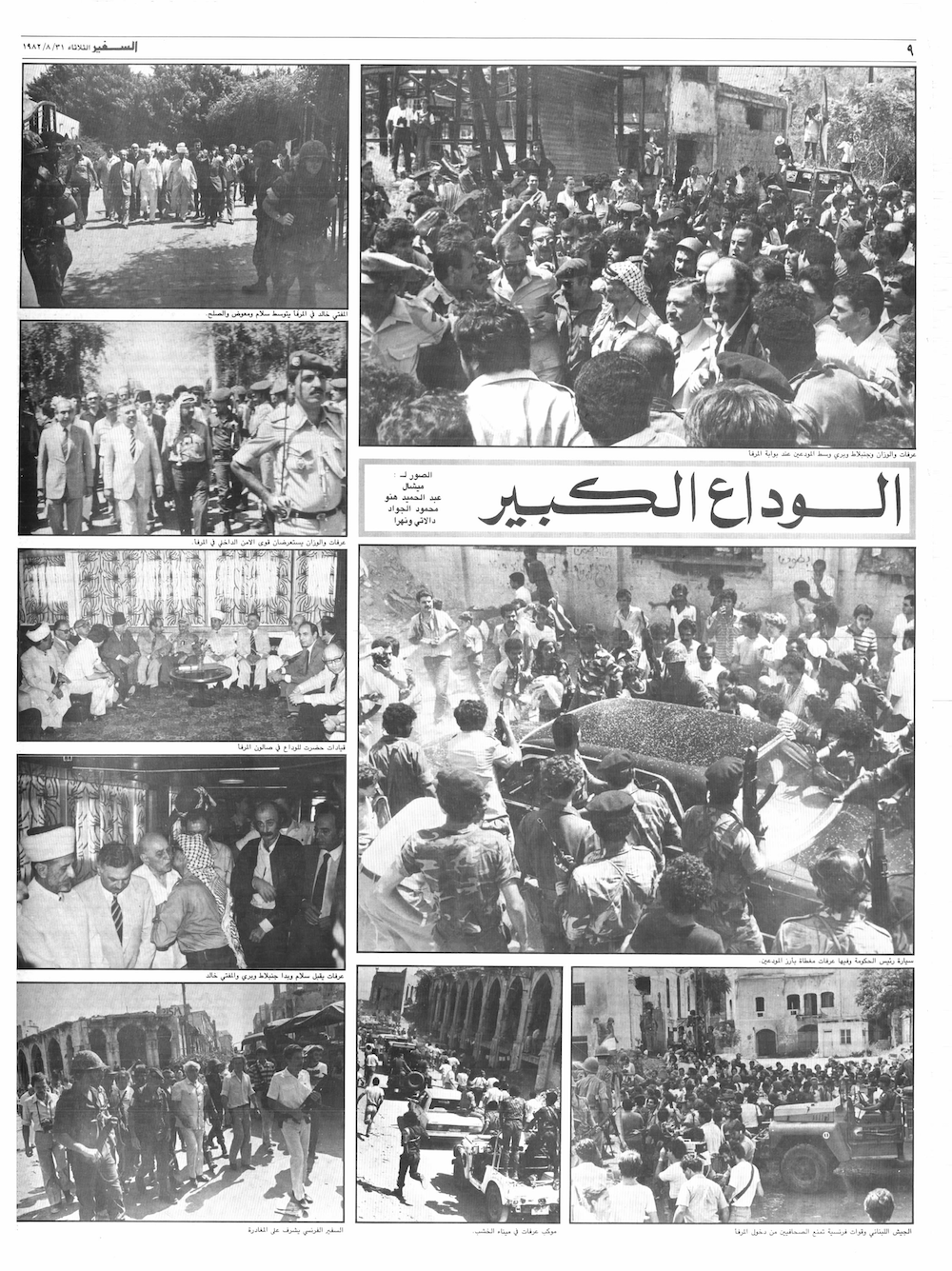 This is a collection of pictures of Lebanese officials, religious and notable personalities, and average people bidding the OLP goodbye when leaving Beirut for good, a condition to end the war.

The names of photojournalists covering the event are listed in the middle. 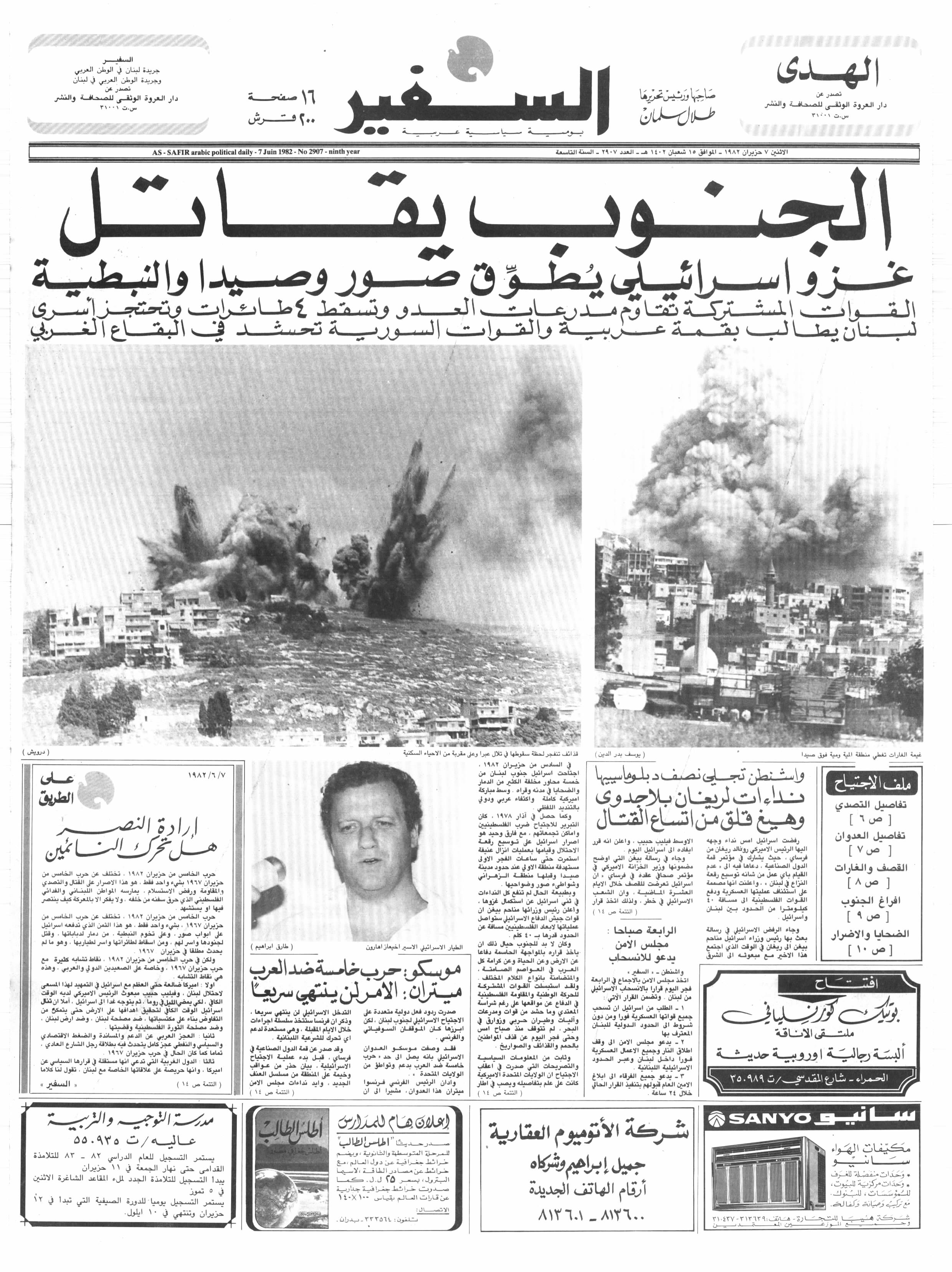 Headline: "The South is Fighting – An Israeli Invasion Besieging Tyre, Sidon, and Nabatiyyeh"

Editorial: "Would the Will of Victory Wake Up those sleeping?"

Headline to left: "Moscow: A Fifth War against the Arabs"

Mitterrand: "This Will Not End Soon"

Footer: "The South is Fighting" 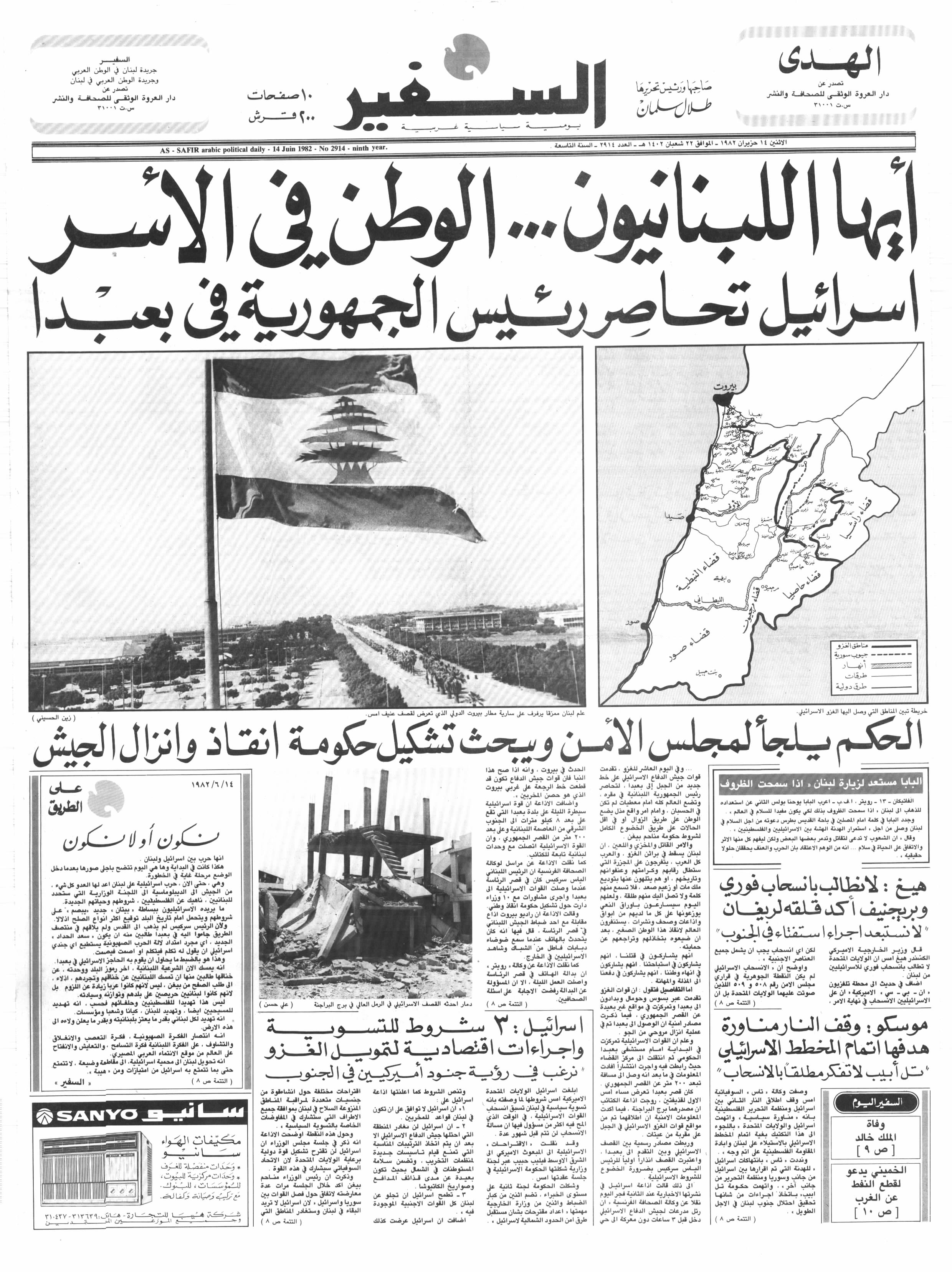 The war between Lebanon and Israel.

Editorial: "To Be or Not to Be"

Second headline: "The Authorities Resort to the Security Council and Study Establishing a Salvation Government and Deploying the Army

One piece of news down to the right: "The Pope is Ready to Visit Lebanon 'Given Convenient Conditions'”

A headline down to the left: Moscow: “The ceasefire is a manipulation aiming at achieving the Israeli goals”

Headline in middle the center of the page: "Israel: Three Conditions for Settlement and Economic Measures to Finance the Invasion—'We Would Like to See US Soldiers in the South'”

Footer: "It’s a War between Lebanon and Israel" 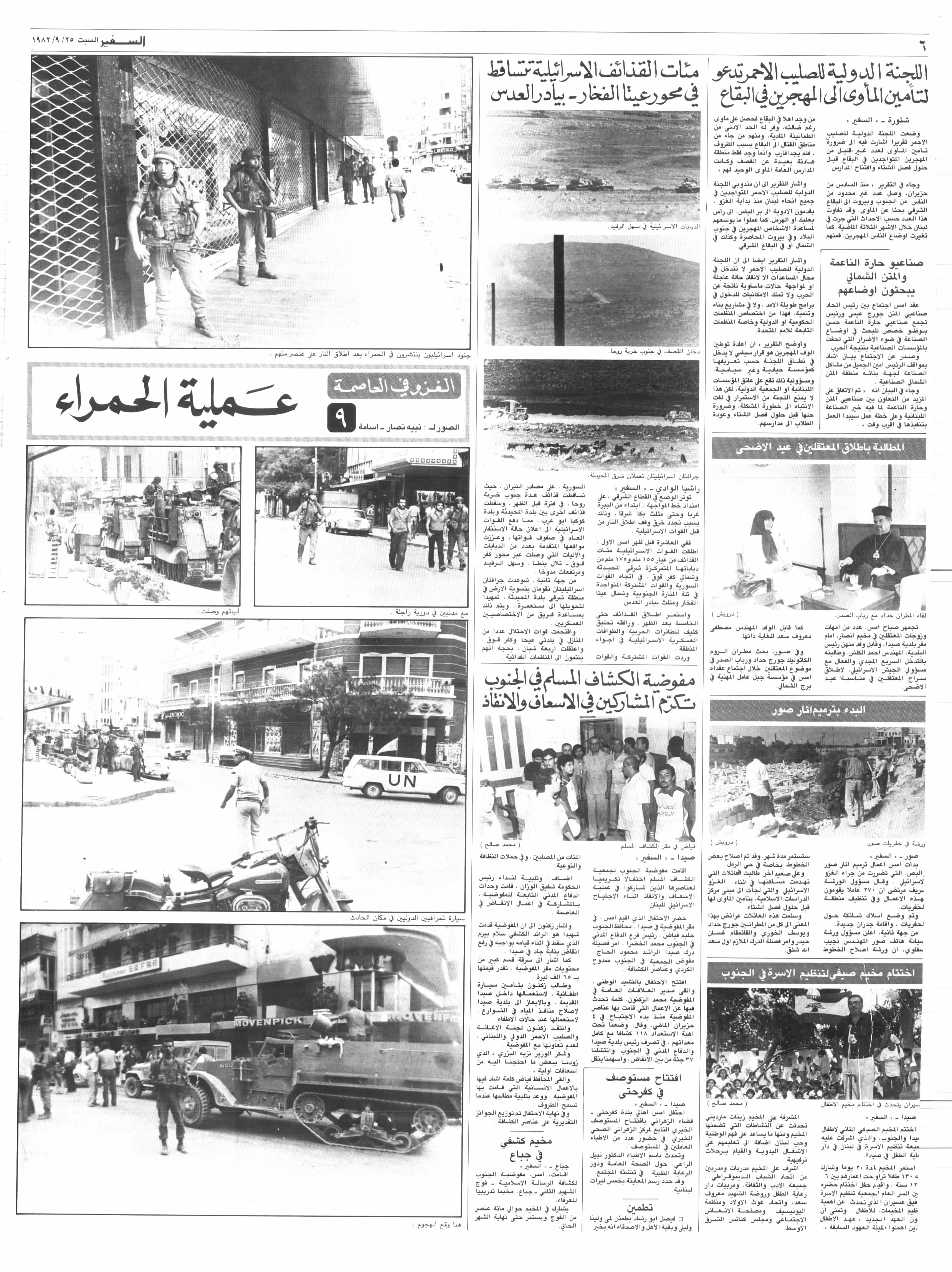 The first operation against the Israelis at Wimpy. 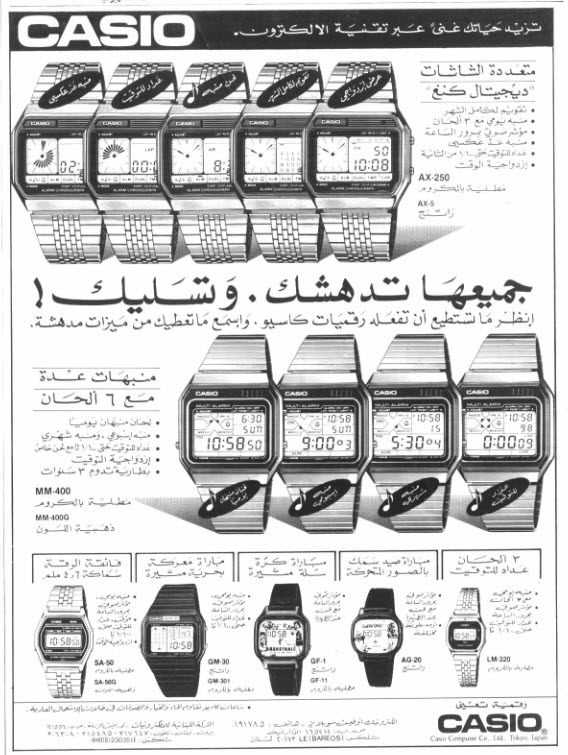 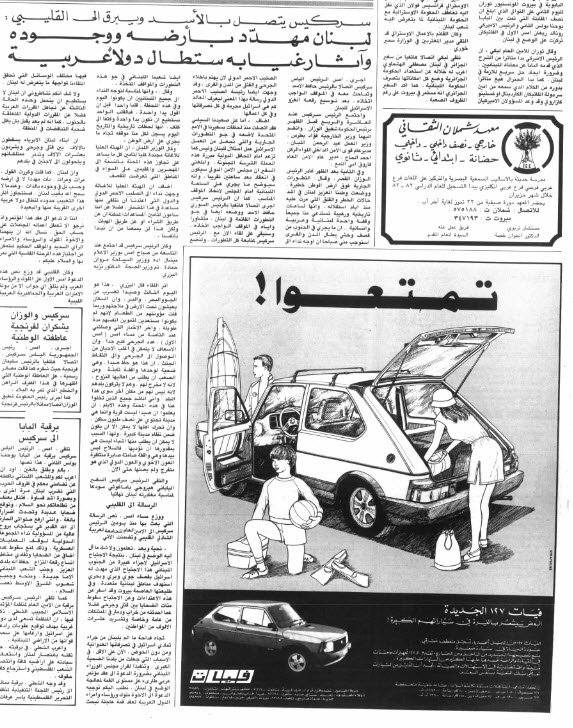 Undated page with the headline: "Sarkis (the president) Calls Al Assad (Hafez) and writes to Qulaybi: 'Lebanon is threatened in its territory and very existence and the implications of its absence will affect Arab countries.'” 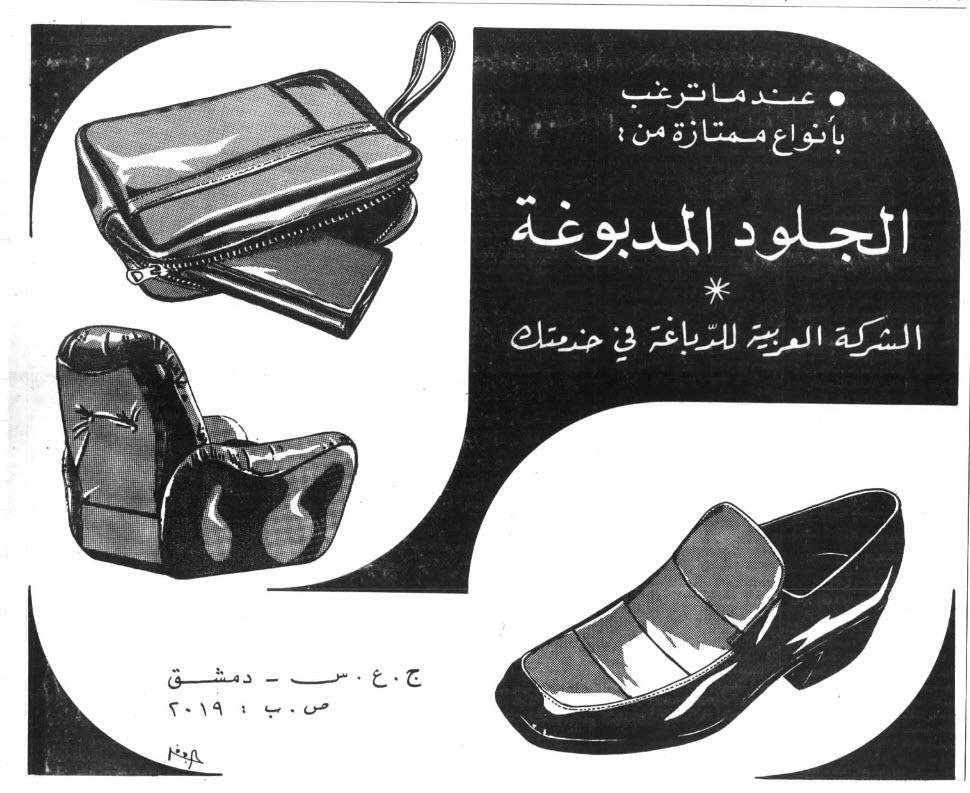 Undated advertisement of Leather Goods made in Damascus. 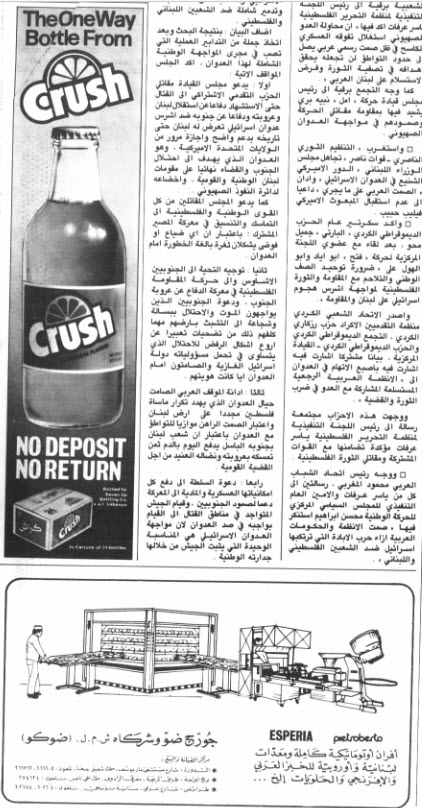 Undated and untitled page with a Crush drink add.

[To view a sample of the archival records of Assafir, view the gallery atop this post.]