A new issue of Status/ الوضع  is on the horizon! This edition - made special to kick off (what in some parts of the world) is Summer 2022 - comes packed with programs, panels, and standalone interviews, covering topics as varied as Arabic dialects in Sub-Saharan Africa to an analysis of the Nile River as a realm of practice.

Front and center on our issue homepage is a talk by Jennifer L. Derr on the contents of her book “The Lived Nile: Environment, Disease, and Material Colonial Economy in Egypt,” which places the environment at the center of questions about politics, knowledge, and the lived experiences of human bodies.

From our partners at Voices of the Middle East & North Africa (VOMENA), we feature a two-part conversation with Professor Natasha Iskander, who documented labor practices on Qatari construction sites. VOMENA also contributes conversations on the latest developments in Tunisia, a debrief of Morocco’s summit with Israel by Samia Errazouki, Desmond Tutu’s solidarity with Palestine and political prisoners in Iran, and much more highlighted below.

This issue also features two interviews which approach the invasion of Ukraine from the perspective of its intersections with Southwest Asia and North Africa. A conversation with Madhdis Keshavarz of the Arab and Middle Eastern Journalists Association touches on the biased coverage of Ukraine and New Lines’ Executive Editor Faisal Al Yafai speaks with award-winning journalist Anand Gopal about Putin’s military incursions in Syria and Ukraine. 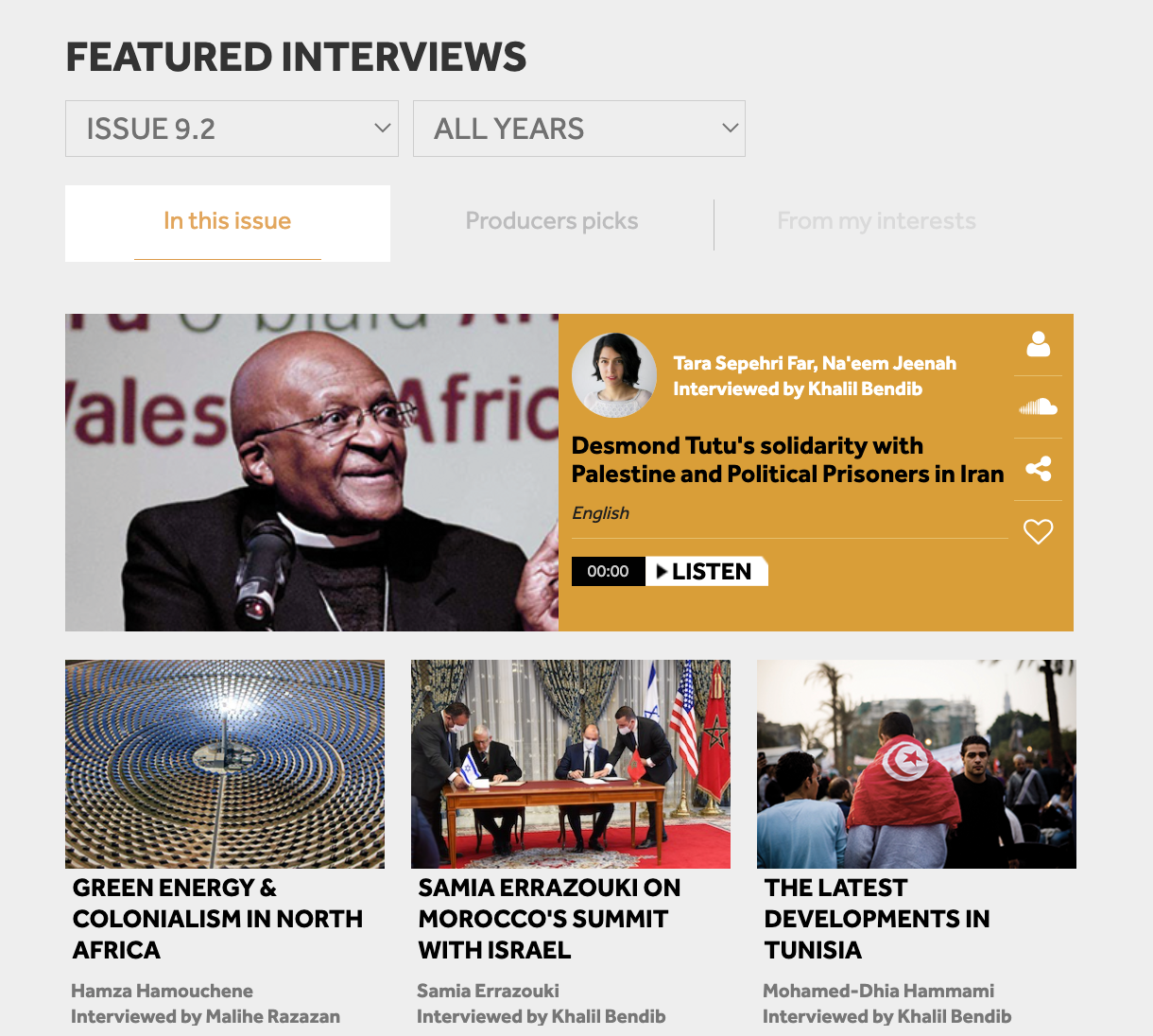 Fans of our programs and episodic content can listen to some brand new Security in Context, featuring two episodes on Palestine - a conversation with Palestinian-Canadian activist and journalist Khaled Barakat on anti-Palestinian smear campaigns which have been on the uptick, and a larger group discussion on Palestinian solidarity with Noura Erakat, Mouin Rabbani, Yara Hawari, and Lina Meruane.

Two new episodes of Connections are featured in this issue. Host Mouin Rabbani speaks with Alison Glick and Nora Lester Murad about the challenges and rewards of narrating personal experience and political realities in Palestine. In Episode 23, he speaks to political scientist Cas Mudde on the coherence of the far right as a global movement.

In our featured Panels for this issue, you can watch “What’s Happening in Yemen?” a forum of scholars and activists - including Hassan El-Tayyab, Stacey Philbrick Yadav, Yazeed al-Jeddawy, Azal Alsalafi - provide a bottom-up perspective on the conflict in the country. Another panel of scholars focus on the roles that countries in Southwest Asia and North Africa play as partners in U.S. imperialism.

As always, there is much more featured in this issue – to watch and listen to more, visit our homepage and subscribe to listen to our interviews on the go on Spotify and Apple Podcasts!