We are proud to present a collection of articles, essays, and reviews that provide new perspectives on vital questions of capitalism, nationalism, and environment. This issue’s peer-reviewed articles section features two such interventions. Malak Labib provides a rigorous and nuanced history of management expertise and shop-floor politics during Egypt’s mid-twentieth-century transformations. Analyzing this critical but underexplored sphere of interaction between Western consultants and Egyptian technocrats in the development era enables Labib to reconsider the periodization of Egyptian political economic history. Christopher Cooper-Davies unearths the distinctive intellectual production of the Iraqi nationalist ‘Ali al-Sharqi. Long dismissed as a contentious sectarian, Cooper-Davies reveals how ‘Ali al-Sharqi advocated an inclusive furati (Euphrates) nationalism, an Iraqi identity grounded in the landscape of the Euphrates Valley.

This issue features Arab Studies Journal’s second essays section. Inaugurated in Fall 2021, the essay section provides scholars and activists a space to concisely analyze fast-moving processes. This collection, titled “Critical Environmental Perspectives in Middle East Studies,” explores how climate and environmental crises shape the conditions of possibility for research and analysis on and in the Middle East and North Africa. Gabi Kirk and Owain Lawson, founding members of the Jadaliyya environment page editorial collective, commissioned and edited these four contributions. They provide an introduction to urgent critical reflections by four scholars on the cutting edge of analyzing the contemporary environmental conjuncture: Gabi Kirk, China Sajadian, Noura Wahby, and Elizabeth Williams. The essays provide methodological insights for how to situate a particular environmental crisis in its proper context as a means to answer questions of scale, causality, and accountability.

As always, the issue concludes as with an insightful and robust reviews section. The works under review explore critical works on empire, disability, and modernity, representing the breadth of contemporary studies of a dynamically changing region.

The committed labor of a phenomenal team of editors and administrators makes Arab Studies Journal possible. Moreover, like all peer-reviewed journals, we rely on the volunteer labor of scholarly peer reviewers located throughout the world. Recognizing the profound pressures we all face, we express our deep gratitude to everyone who contributed to this issue. 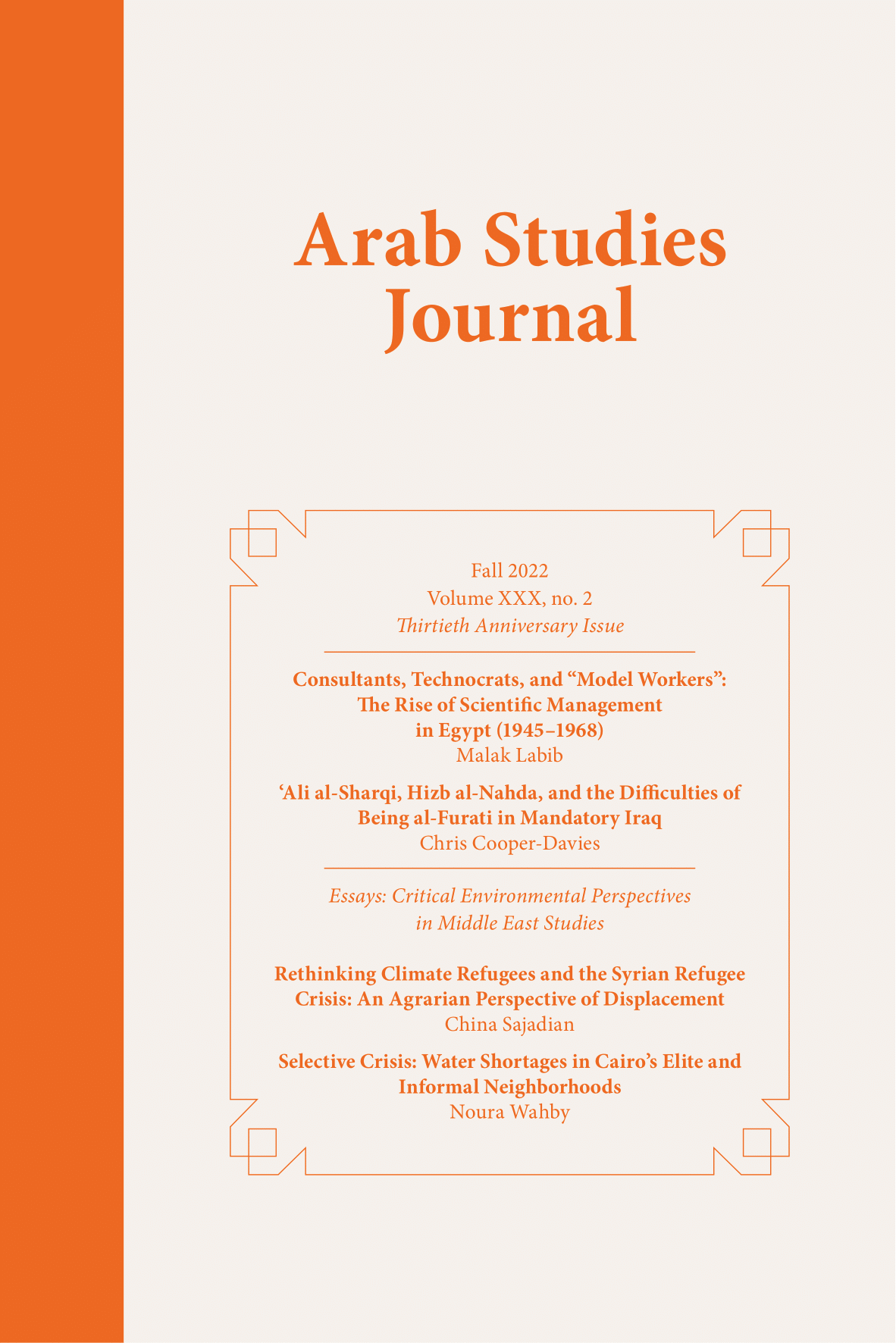 ‘Ali al-Sharqi, Hizb al-Nahda, and the Difficulties of Being al-Furati in Mandatory Iraq
Chris Cooper-Davies

Specters of World Literature: Orientalism, Modernity, and the Novel in the Middle East By Karim Mattar
Reviewed by Ziad Dallal

Empires of Antiquities: Modernity and the Rediscovery of the Ancient Near East, 1914–1950 By Billie Melman
Reviewed by Sarah Griswold

The Remaking of Republican Turkey: Memory and Modernity since the Fall of the Ottoman Empire By Nicholas L. Danforth
Reviewed by Perin Gürel and Gavin Moulton

Between Empire and Nation: Muslim Reform in the Balkans By Milena B. Methodieva
Reviewed by Dženita Karić

The Universal Enemy: Jihad, Empire, and the Challenge of Solidarity By Darryl Li
Reviewed by Flagg Miller 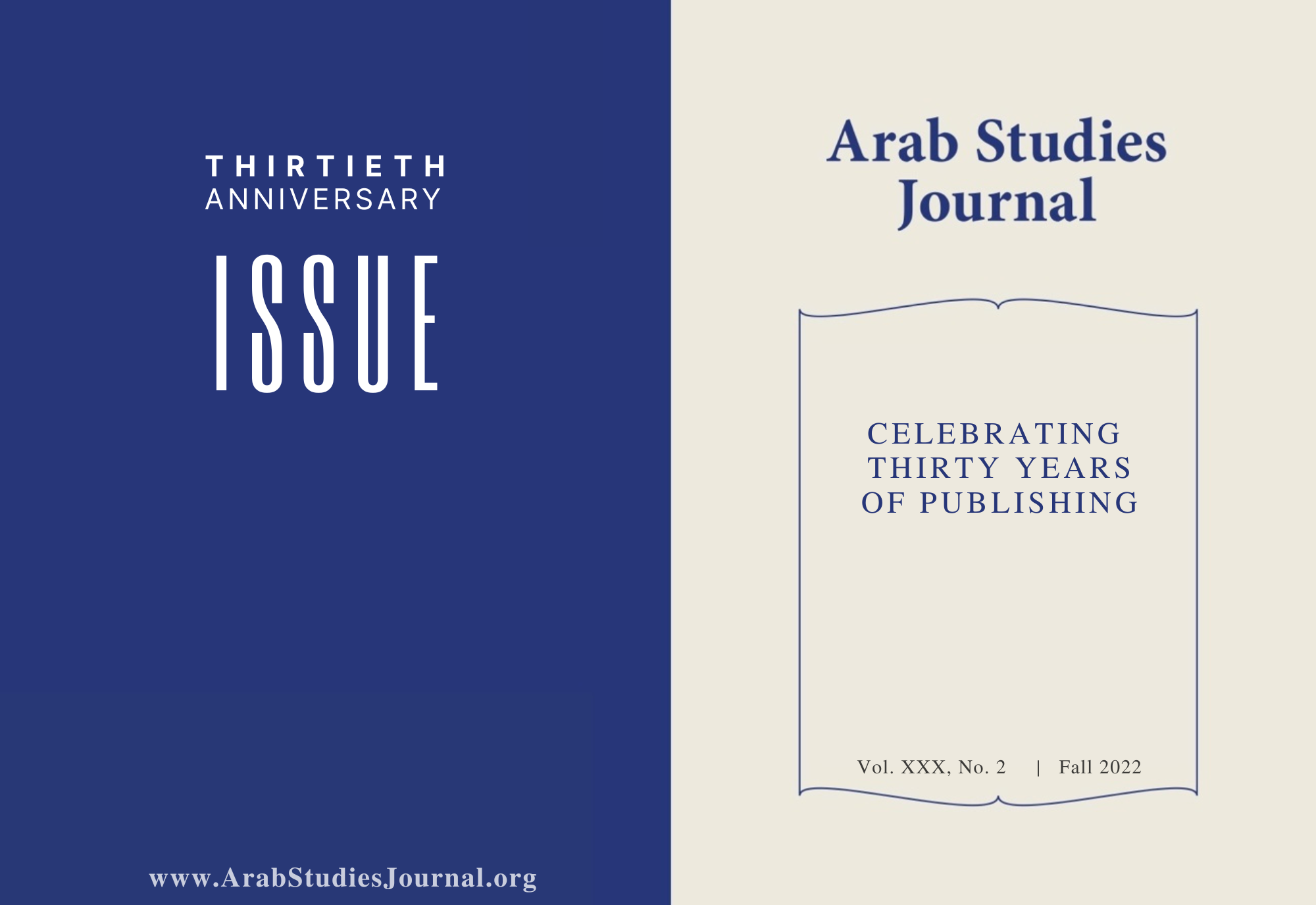