Dr. Charisse Burden Stelly is an associate professor of African American Studies at Wayne State University and a member of the Black Alliance for Peace Research & Political Education Team.

This episode of the Transnational Times podcast, between Jadaliyya Co-Editor Noura Erakat and Dr. Charisse Burden-Stelly, will explore the range of Dr. CBS’s scholarship with an emphasis on her most recent publication, Organize, Fight, Win. The first collection of its kind, Organize, Fight, Win brings together three decades of Black Communist women’s political writings. In doing so, it highlights the link between Communism and Black liberation. Likewise, it makes clear how Black women fundamentally shaped, and were shaped by, Communist praxis in the twentieth century. Click here to purchase a copy of Organize, Fight, Win. 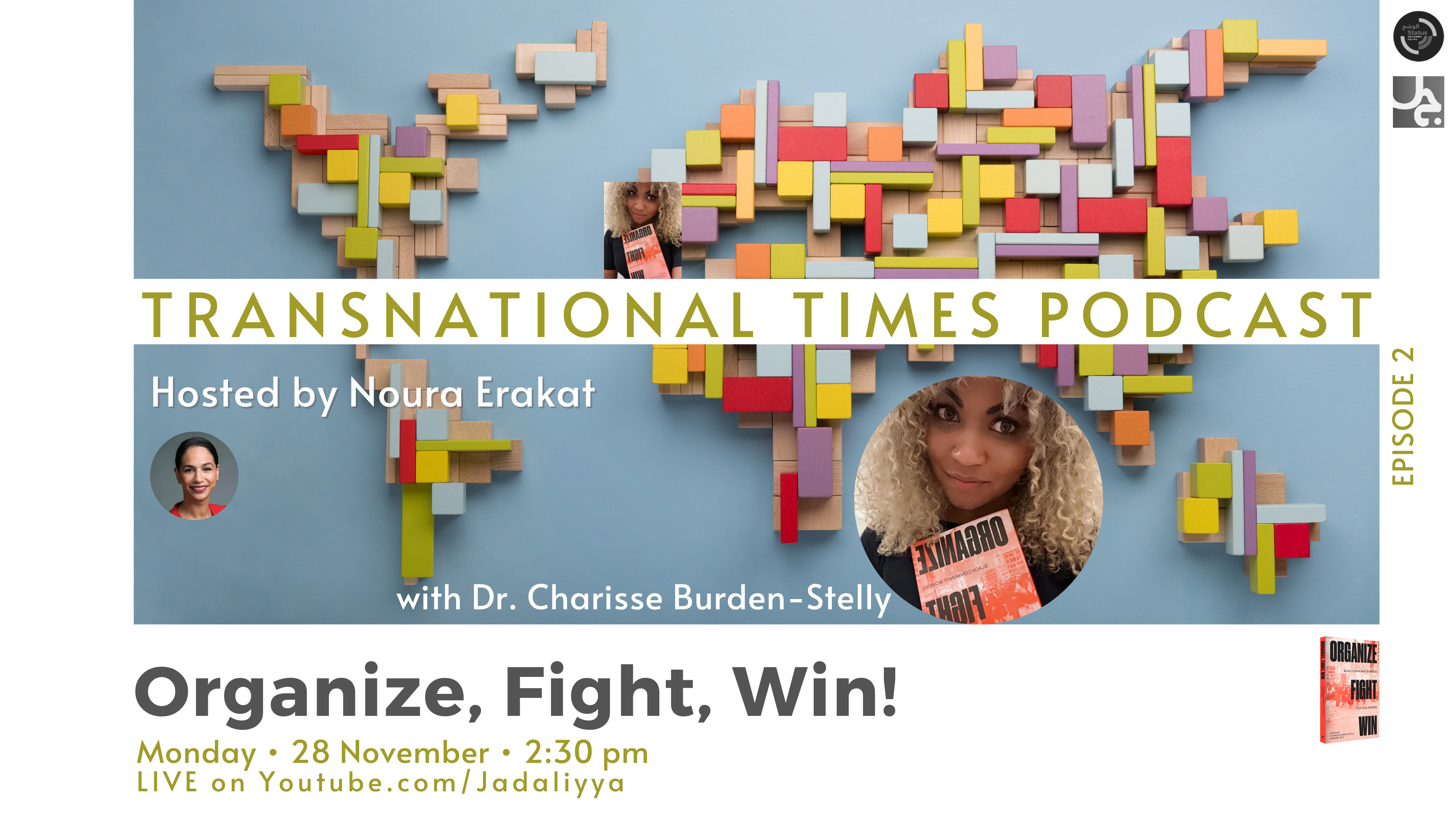 Dr. Charisse Burden-Stelly (Dr. CBS) is a critical Black Studies scholar of political theory, political economy, intellectual history, and historical sociology. She pursues a research program that encompasses two complementary lines of inquiry. The first interrogates the transnational entanglements of U.S. racial capitalism, anticommunism, and antiblack structural racism. Her second area of focus examines twentieth-century Black anticapitalist thought with a particular focus on W.E.B. Du Bois and scholar activists in his intellectual community. She is the co-author, with Dr. Gerald Horne, of W.E.B. Du Bois: A Life in American History, and she is currently working on a book manuscript tentatively titled Black Scare/Red Scare: Antiblackness, Anticommunism, and the Rise of Capitalism in the United States in which she examines the rise of the United States to global hegemony between World War I and the early Cold War at the intersection of racial capitalism, Wall Street imperialism, anticommunism, and antiblackness. She is also the co-editor, with Dr. Jodi Dean, of the forthcoming volume Organize, Fight, Win: Three Decades of Black Communist Women’s Political Writings (Verso, 2022) and the co-editor, with Dr. Aaron Kamugisha, of the forthcoming collection of Dr. Percy C. Hintzen’s writings titled Reproducing Domination: On the Caribbean and the Postcolonial State (University of Mississippi, 2022). Additionally, she guest edited the “Claudia Jones: Foremother of World Revolution” special issue of The Journal of Intersectionality. Her published work appears in journals including Small Axe, Monthly Review, Souls, Du Bois Review, Socialism & Democracy, International Journal of Africana Studies, and the CLR James Journal. My media appearances included The Real News Network, Breakthrough News, Millennials Are Killing Capitalism podcast, and By Any Means Necessary news show.

Noura Erakat is a human rights attorney, Associate Professor of Africana Studies  and the Program of Criminal Justice at Rutgers University, New Brunswick. She recently completed non-resident fellowship of the Religious Literacy Project at Harvard Divinity School. Noura is the author of Justice for Some: Law and the Question of Palestine (Stanford University Press, 2019), which received the Palestine Book Award and the Bronze Medal for the Independent Publishers Book Award in Current Events/Foreign Affairs. She is co-founding editor of Jadaliyya and editorial board member of the Journal of Palestine Studies as well as Human Geography. She is a co-founding board member of the DC Palestinian Film and Arts Festival. She has served as Legal Counsel for a Congressional Subcommittee in the US House of Representatives, as Legal Advocate for the Badil Resource Center for Palestinian Refugee and Residency Rights, and as national organizer of the US Campaign to End the Israeli Occupation. Noura has also produced video documentaries, including "Gaza In Context" and "Black Palestinian Solidarity.” Her writings have appeared in The Washington Post, The New York Times, the Los Angeles Review of Books, The Nation, and Al Jazeera. She is a frequent commentator on CBS News, CNN, MSNBC, CBS, Fox News, the BBC, and NPR, among others. 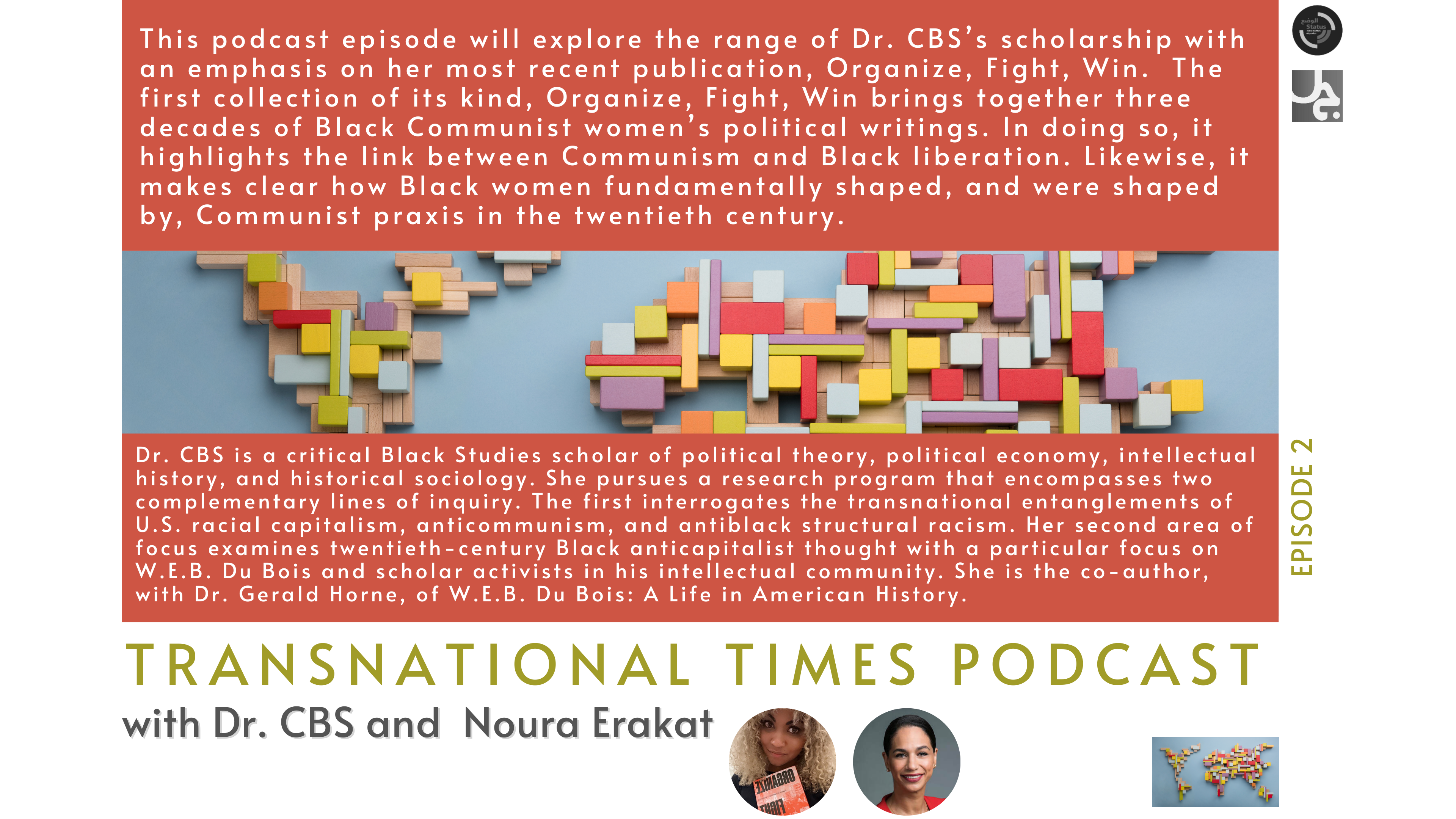