The Arab Studies Institute at the MESA Conference

The Arab Studies Institute at MESA 2017

The 2017 Annual Meeting of the Middle East Studies Association (MESA), held November 18-21 in Washington D.C., showcased the Arab Studies Institute’s (ASI) ever-growing network of scholars, activists, authors, and practitioners. This year’s MESA offered ASI a forum to announce some of its most exciting new projects, initiatives, and developments. Here, we share a sense of the MESA whirlwind with you, reflecting in turn on future ventures at ASI, our sister organizations, and scholarship on and in the region more broadly.

MESA 2017 inaugurates a palpable change for one of ASI’s foundational initiatives: On its seventh birthday, Jadaliyya has instituted a new website, a visually stunning architecture from which the e-zine will continue its ambitious mission. The website, now in BETA, is redesigned to embolden processes of knowledge production and dissemination. Users can now create their own accounts and share content more easily than before. Search capabilities are expanded, site-wide navigation is streamlined, and new features for content customization offer new possibilities for instructors, learners, researchers, and users. The website’s Arabic section is now accessible entirely in that language, presenting our Arabic editors with a new base of operations while also more seamlessly integrating Arabic content into Jadaliyya’s homepage.

As we wrote on its launch post, seven years ago, Jadaliyya did not simply create a new website. Rather it forged a space for new forms of producing and disseminating knowledge. With a new web platform come renewed possibilities towards that continuous mission—and with this infrastructural tool now in hand, we eagerly return to work.

The new Jadaliyya platform also more closely integrates the work of its ASI sister organizations. The peer-reviewed articles and book reviews from Arab Studies Journal, new publications at Tadween, the workshops and lectures at the Forum on Arab and Muslin Affairs (FAMA), and the audio content at Status/الوضع  are all spotlighted within, representing an increased commitment to cohesive cross-platform collaboration within ASI. 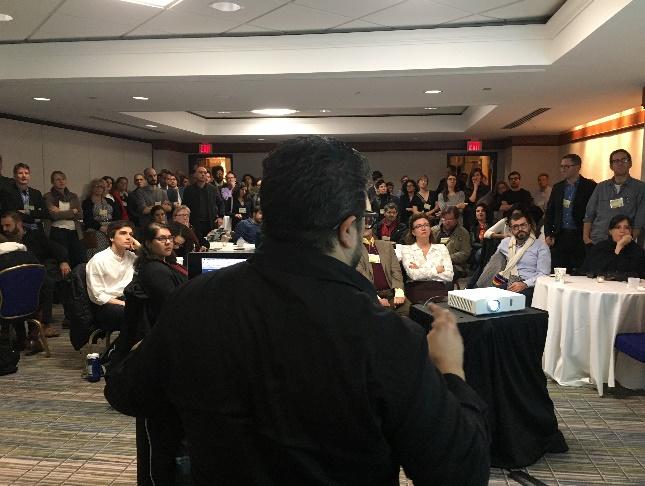 With this spirit in mind, ASI’s annual MESA reception highlighted new endeavors. ASI announced the Middle East Studies Pedagogy Initiative (MESPI), which is an interactive platform for Middle East studies resources tailored to the needs of teachers, researchers, and students. It offers a one-stop shop for course design at the macro level, lesson planning at the micro level, and scholarship concerning specific topics, countries, and disciplines.

The reception was a time for ASI members to outline their recent activities. Jadaliyya Arabic editors Sinan Antoon and Ibtisam Azem presented their work on the new-and-improved Arabic content, out in full force on القسم العربي. Members of the Status/الوضع audio journal gave a glimpse of its latest content. ASJ Editor Sherene Seikaly (pictured lower left) introduced the newly-released Arab Studies Journal Fall 2017 Issue which includes contributions on histories and contemporalities of race, inequality, and poverty in Egypt, image production in Palestine, and Arab self-criticism after 1967. Next year will mark twenty-eight years of the Journal, a backbone of ASI’s initiatives.

Read the table of contents here.

The ASI reception culminated with the Political Economy Project announcing its 2017 Book Prize Winners: Hanan Hammad’s Industrial Sexuality: Gender, Urbanization, and Social Transformation in Egypt (University of Texas Press) and Johan Mathew’s Margins of the Market: Trafficking and Capitalism across the Arabian Sea (University of California Press). Both works share the contextual understanding and rich theoretical background which typify the intellectual framework of the Political Economy Project in general. 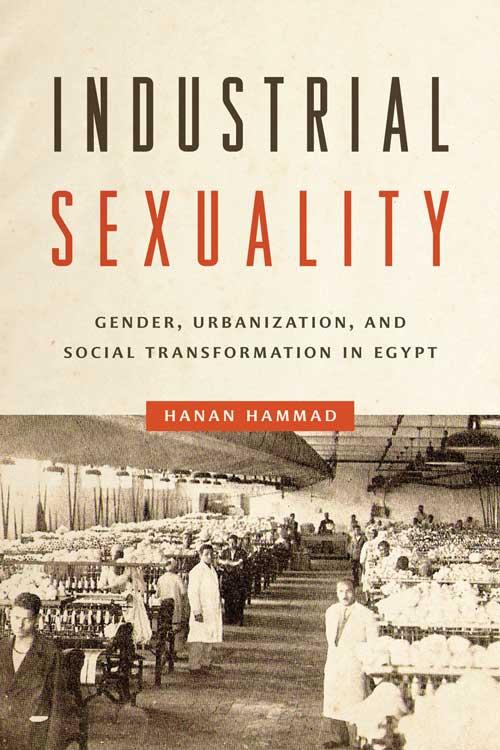 Members of the ASI community presented a staggering range of works throughout MESA at panels, lectures, and workshops. Of these presentations, the Thinking Palestine Intersectionally panel was particularly noteworthy. Accompanied by luminary scholar-activists Judith Butler, Angela Davis, and Samera Esmeir, ASI’s own Noura Erakat offered a critical intervention while Sherene Seikaly organized and framed this event. The panel was a call for increased scholarly steadfastness at this moment of continuous rupture. On this round-numbered year of anniversaries and their alternatives, we reflected on histories and trajectories to envision alternative and better futures. The panelists spoke before a packed house, receiving a raucous standing ovation. Pictured here are scenes from the presentations, the packed room, and four of the panelists meeting over lunch alongside  Bassam Haddad.

Throughout the presentations, meetings, and lectures, ASI simultaneously kept shop at the MESA book bazaar, highlighting a bounty of recent publications and productions. The bazaar proved a fruitful moment to share ASI materials, including those ASI works which are most frequently distributed online. Tadween Publishing’s diverse array of materials sparked great enthusiasm from the MESA crowd, with those materials pictured below alongside ASI contributors, team members, and friends. 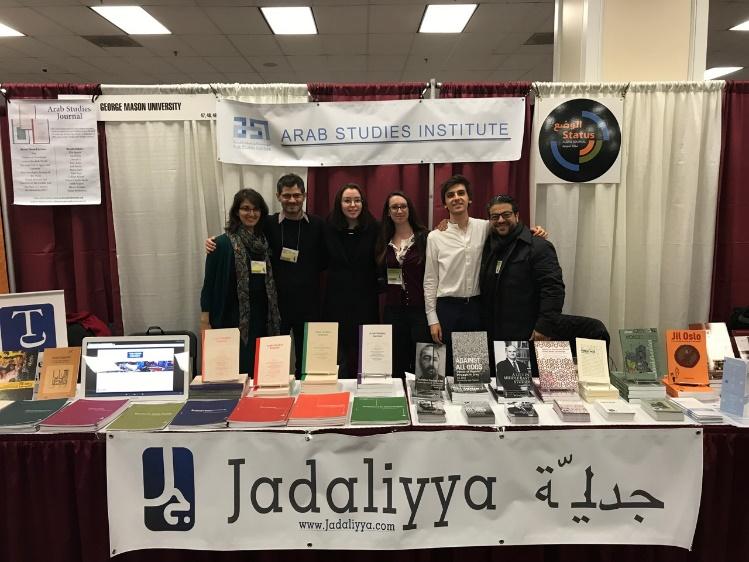 Some ASI members at dinner.

Tadween’s newly-released "JadMag 5.1: Settler Colonialism" offers remembrances and reflections on ethical solidarities. Edited by Maya Mikdashi, Volume 5.1 analyzes the contemporary meaning of settler colonialism, the experiences of settler colonialism across indigenous groups, and the mobilization of solidarity groups. Tadween also highlighted its output of hardcopy books, which include The Political Theology of ISIS by Ahmad Dallal and the Arabic-language الصراع على السلطة الدستورية: دور المحكمة الدستورية العليا في السياسة المصرية by Tamer Mustafa. By examining ISIS’s political theology, Dallal locates the challenges it poses to notions of justice in the Arab and Muslim world. Mustafa’s work, originally published in English in 2007 and now translated into Arabic, analyzes the intersection of law and politics in Egypt, with particular emphasis on its Supreme Constitutional Court.

Status/الوضع displayed its newly-released Issue 4.2, brimming with thought-provoking commentary, interviews, analyses, and critical interventions. Issue 4.2 features (pictured below) an expansive effort towards critically-engaged Syria coverage, including interviews with activist Fadwa Mahmoud, actress Hala Omran, and theater-maker Wisam Talhouq. Issue 4.2 highlights new partnerships with Georgetown University and Northwestern University, and continues expanding the quality and quantity of its video output. Going forward, Status will release content between issue releases to maximize its impact on topical subjects. With weekly syndication coming to KPFA in the next calendar year, Status will again extend its frame as a prime source of audio-related information on the MENA region. 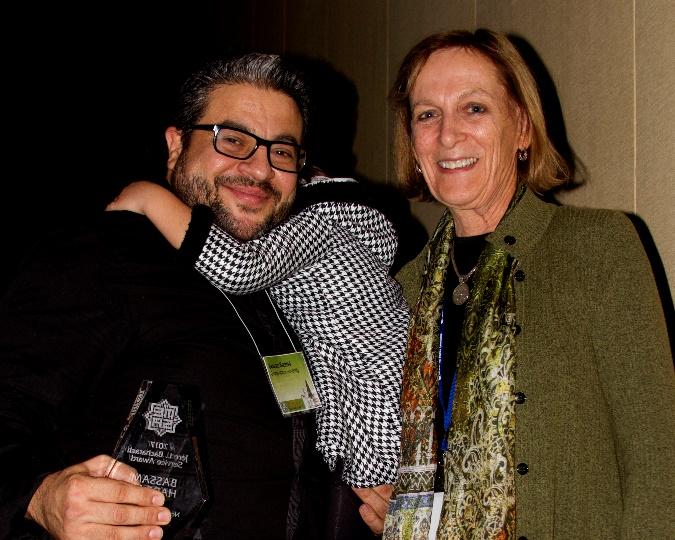 ASI remains a volunteer-driven organization whose ideas and interventions are implemented through a dedicated network of contributors. We encourage you to get involved by submitting an article to Jadaliyya or submitting to the Arab Studies Journal, submitting a book manuscript to Tadween Publishing, proposing an interview for Status/الوضع Audio Journal, or by simply sharing content produced by the Arab Studies Institute. MESA always marks a great opportunity to interact with the ASI team. We send our warmest thanks to everyone who participated this year, and very much hope to see you again at next year’s conference!