Exploring the New Regional Dynamics of the Middle East

This is the fifth signature event of the
Ten Years On: Mass Protests and Uprisings in the Arab World Project

Co-sponsored by  the Arab Council for Social Sciences and the Institute of Arab and Islamic Studies, University of Exeter

The last decade has witnessed deep changes to the regional dynamics of the Middle East. Millions of people have been displaced within and across the region, disrupting existing territorial arrangements and producing a range of new cross-border networks and political and economic ties. Struggles over regional influence have generated complex patterns of inter-state rivalries and reconfigured regional alliances in unprecedented ways. Closely coupled to these unstable political dynamics are changing trade, finance, and investment flows, with new relationships evolving between Middle Eastern states and neighbouring regions such East and West Africa, South Asia, and the Balkans.

This signature event will explore some of these themes and their implications for how we understand the Middle East as a ‘region’ or ‘area’. What new cross-border flows have emerged in the Middle East over the last decade, and how do these challenge standard social science approaches to the Middle East? How can we integrate the pluralities of the Middle East – including those of non-Arab majority states – into a study of the region, in ways that move beyond the constraints of competing nationalisms, geographical silos, and disciplinary boundaries? How do we recognize regional patterns of unevenness, marginalization, and dispossession, while avoiding homogenizing accounts that flatten the Middle East as an area in uniform ‘decline’ or ‘crisis’? How is the Middle East located within the changing global order, and what new relationships might be forming between the region and other areas of the world system?

Seda Altuğ is a lecturer at the Atatürk Institute for Modern Turkish History at Boğaziçi University, Istanbul. She received her PhD from Utrecht University, Netherlands. Her dissertation is entitled “Sectarianism in the Syrian Jazira: Community, Land and Violence in the Memories of World War I and the French Mandate (1915–1939)”. Her research interests are state-society relations in French-Syria, sectarianism, land question, empire, border and memory. Her recent work concerns land, property regimes and citizenship practices in the late Ottoman East and Syria under the French mandate.

Dr Olfa Lamloum holds a PhD in political science from Paris 8 University. She taught at the University of Paris-Nanterre before joining the French Institute of the Middle East (IFPO) in Beirut as a researcher.  She is currently the Tunisia country director for the NGO International Alert. She has led several research projects on the relegation of the border areas and working class suburbs in Tunisia. Her latest edited book is Jeunes et violences institutionnelles : Enquêtes dix ans après la révolution(2021) She also co-directed 2 documentary films, including Voices from Kasserine (2017).

Maziyar Ghiabi is Wellcome Lecturer in Medical Humanities and Politics at the University of Exeter. He is the author of Drugs Politics: Managing Disorder in the Islamic Republic of Iran (London: Cambridge University Press, 2019, also in Open Access) won the 2020 Book of the Year Nikki Keddie Award by the Middle Eastern Studies Association (MESA). Maziyar's current project is about the experience of 'addiction' in states of disruption and it is funded by the Wellcome Trust, 2021-2026. Beside the politics of health, Maziyar has worked on theoretical and anthropological approaches to revolt, displacement and state formation, the outcome of which will appear in a forthcoming book, States Without People in 2022 with McGill-Queen’s University Press, 2022.

Arang Keshavarzian is Associate Professor of Middle Eastern and Islamic Studies at New York University.  He is the author of Bazaar and State in Iran: The Politics of the Tehran Marketplace  and the co-editor with Ali Mirsepassi of Global 1979: Geographies and Histories of the Iranian Revolution.  He has published articles on the political economy and history of Iran, the Persian Gulf, and the broader Middle East in journals including Politics and Society, International Journal of Middle East Studies, Geopolitics, Economy and Society, and the International Journal of Urban and Regional Research.

Rima Majed is an Assistant Professor of Sociology at the Sociology, Anthropology and Media Studies Department at the American University of Beirut (AUB). Her work focuses on the fields of social inequality, social movements, sectarianism, conflict, and violence. Dr. Majed has completed her PhD at the University of Oxford where she conducted her research on the relationship between structural changes, social mobilization, and sectarianism in Lebanon. She was a visiting fellow at the Mamdouha S. Bobst Center for Peace and Justice at Princeton University in 2018/19. Dr. Majed is the author of numerous articles and op-eds. Her work has appeared in several journals, books and platforms such as Social Forces, Mobilization, Routledge Handbook on the Politics of the Middle East, Middle East Law and Governance, Oxford Handbook of the Sociology of the Middle East, Global Dialogue, Idafat: The Arab Journal of Sociology, Al Jumhuriya, OpenDemocracy, Jacobin, Middle East Eye, and Al Jazeera English. She is also the co-editor of the upcoming book The Lebanon Uprising of 2019: Voices from the Revolution (I.B. Taurus).

Rafeef Ziadah is Lecturer in Comparative Politics of the Middle East in the Politics and International Studies Department, SOAS University of London. Her research interests are broadly concerned with the political economy of transport infrastructures, war and humanitarianism, racism and the security state, with a particular focus on the Middle East. Her latest book is Revolutionary Feminisms (Verso, 2020) co-edited Brenna Bhandar.

Seteney Shami is an anthropologist from Jordan with degrees from the American University in Beirut and U.C. Berkeley. After teaching at Yarmouk University in Jordan and setting up a graduate department of anthropology, she moved in 1996 to the regional office of the Population Council in Cairo as director of the Middle East Awards in Population and the Social Sciences (MEAwards). She has also been a visiting Professor at U.C. Berkeley, Georgetown University, University of Chicago, Stockholm University and the Swedish Collegium for Advanced Study in the Social Sciences (Uppsala). In July 1999, she joined the Social Science Research Council in New York and is program director for the program on the Middle East and North Africa and also was the program director for Eurasia from 1999-2010. She is also the Founding Director of the newly established Arab Council for the Social Sciences, a regional organization headquartered in Beirut. She has conducted fieldwork in Jordan, Turkey and in the North Caucasus. Her research interests center on issues of ethnicity and nationalism in the context of globalization, urban politics and state-building strategies, and population displacement and trans-national movements.

Adam Hanieh teaches in the Department of Development Studies at SOAS, University of London. His recent publications include Capitalism and Class in the Gulf Arab States (2011); Lineages of Revolt: Issues of Contemporary Capitalism in the Middle East (2013); and (co-edited with Omar Shehabi and Abdulhadi Khalaf) Transit States: Labour, Migration, and Citizenship in the Gulf (2014). 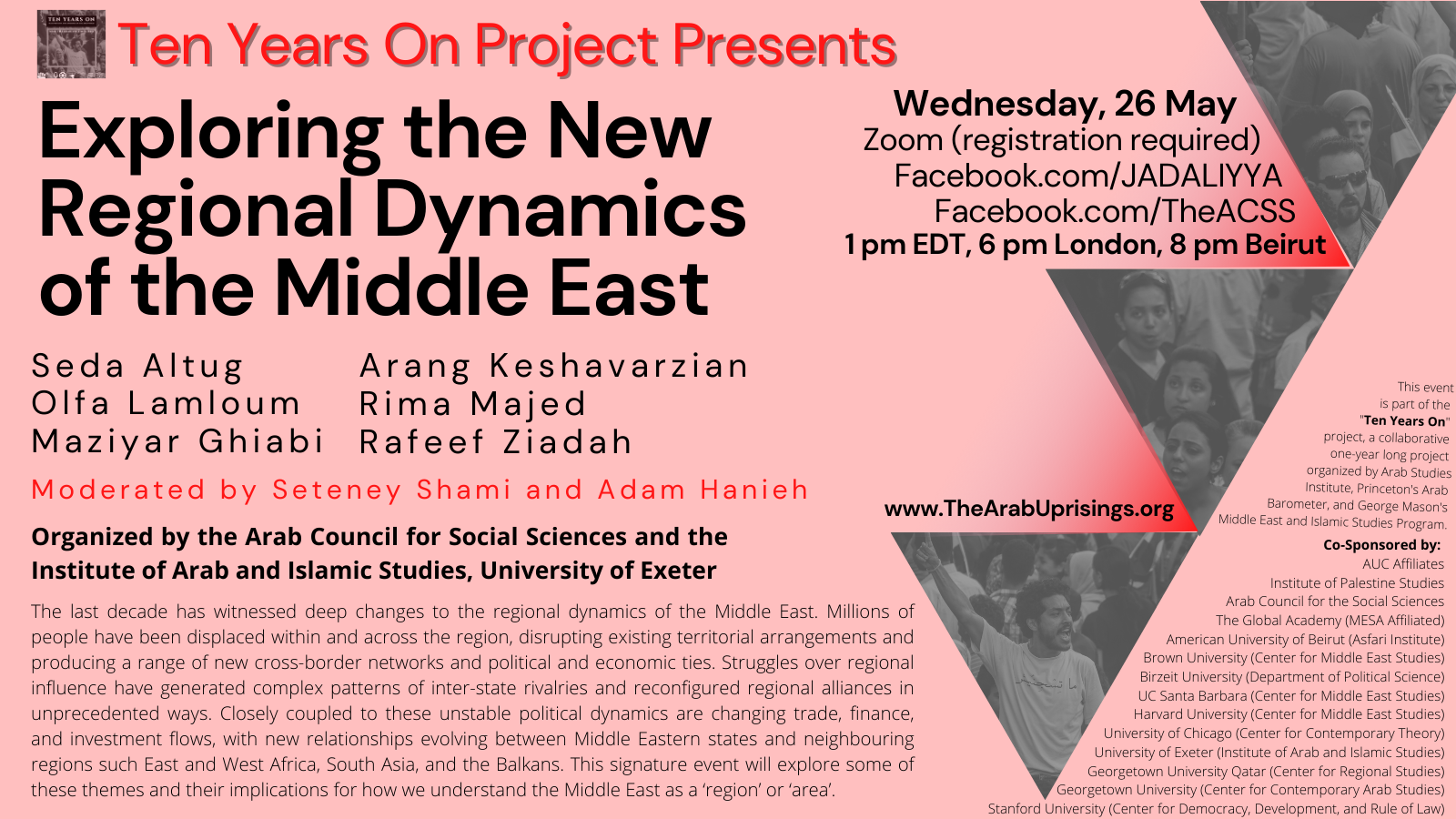