This month, co-hosts MK Smith and Bassam Haddad covered the recent “Landscapes of Insecurity” conference by Security in Context, a panel on the ongoing anti-government protests in Iran, several new books by ASI team members on topics such as football in the Middle East, sexuality and state power in Lebanon, and prosecuting the US government’s use of torture, pedagogy, new texts out now, and must-read recommendations. 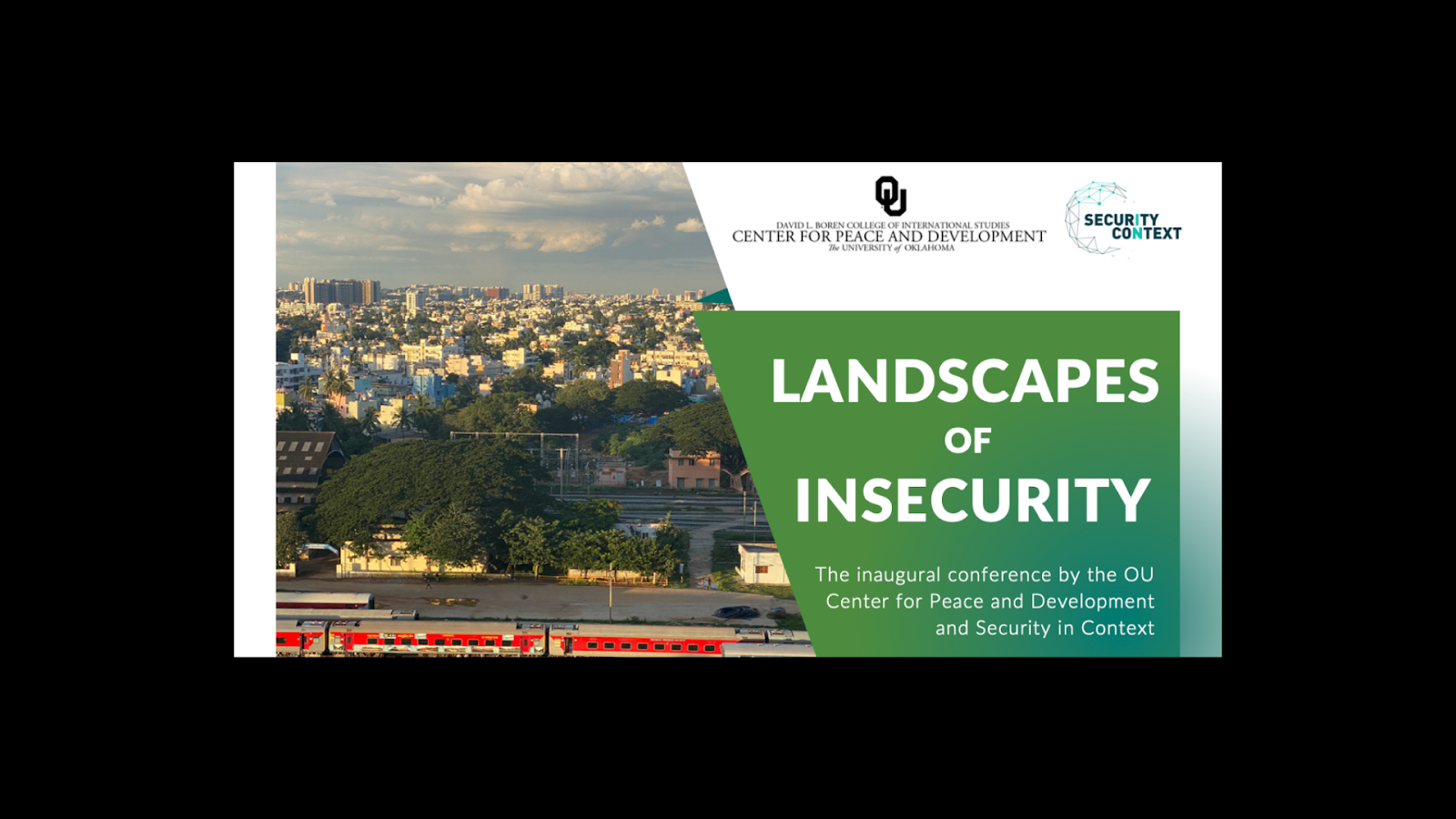 In mid-September, ASI’s partner Security in Context and the University of Oklahoma Center for Peace and Development held the inaugural Landscapes of Insecurity conference in Oklahoma City. The goal was to bring together like minded individuals who are committed to social justice, bottom up development, and cross-disciplinary work by creating a cross-regional exchange.

The conferences strove to strengthen the idea of a Security in Context “network,” and allowed the participants to share their research, brainstorm, and create concrete research themes and projects.

Project Director of Security in Context and Professor of Economics at Hampshire College, Omar S. Dahi, explained why it was necessary to hold this conference to strengthen the Security in Context “network,” and essential threads that permeated the weekend’s program.

In Her Name: Women Rising, State Violence, and the Future of Iran 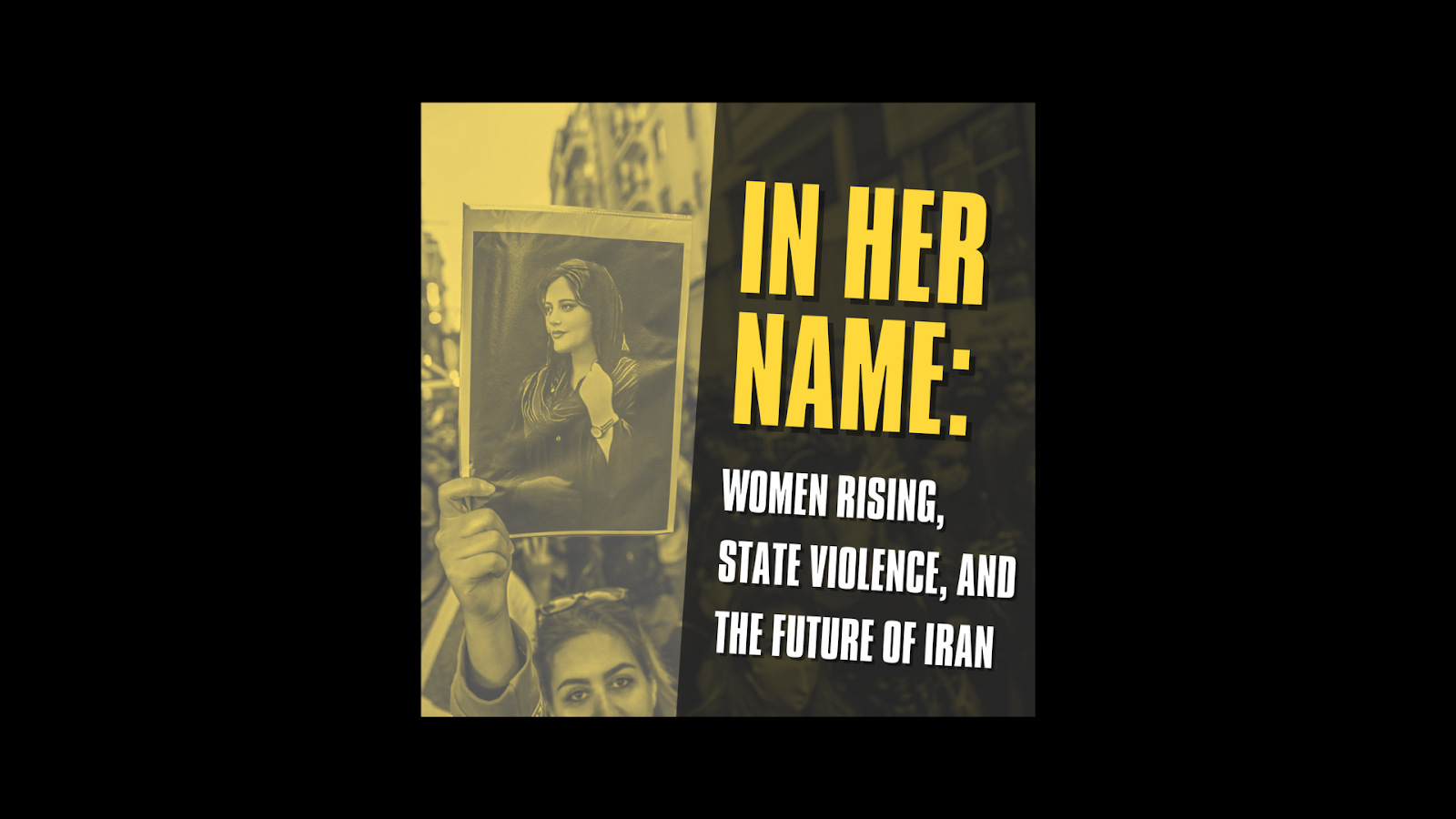 Last week, Jadaliyya’s Iran Page held an event titled “In Her Name,” which was a conversation with scholars of Iran and its diasporas to discuss the current anti-government protests there. The speakers contextualized the protests within the broader struggle for women's rights in Iran and transnational feminist movements.

The event was co-moderated by Bassam and professor of Anthropology at William and Mary, Negar Razavi. The discussion was as incisive as it was timely, and gave proper context to the protests that are mostly missing from mainstream discourse.

The Iran Page’s Manijeh Moradian and Catherine Sameh, who were both participants in the panel event, share a few of the insights from the discussion, speaking to the context of feminist organizing under the Iranian government and the current political moment.

The War in Court by Lisa Hajjar 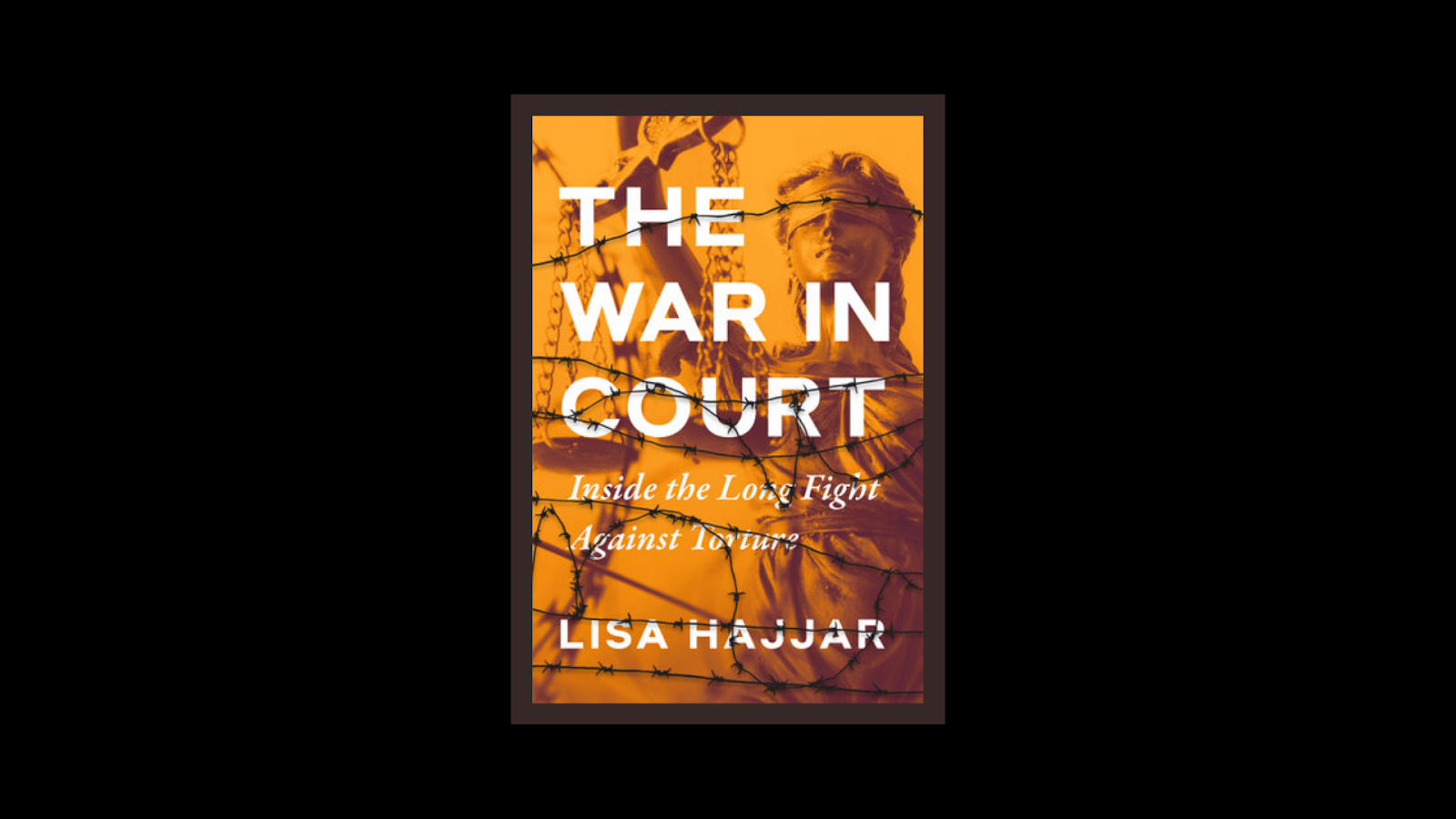 The team covered an exciting book coming out by a beloved ASI team member, Lisa Hajjar, who is a Jadaliyya Co-Editor and Professor of Sociology at University of California-Santa Barbara. Lisa’s new book from University of California Press, titled “The War in Court: Inside the Long Fight against Torture,” traces the fight against US torture policy by lawyers who brought the "war on terror" into courts.

This book outlines why challenges to the policy of torture had to be waged on the legal terrain, and why hundreds of lawyers joined the fight and were able to force the government to change the way prisoners were treated and focused attention on state crimes perpetrated in the shadows.

Lisa Hajjar shares her motivations for writing her new book and why it is important to recount the legal battle against the US government’s use of torture in the War on Terror, as well as why the book was written as a suspenseful story.

Football in the Middle East 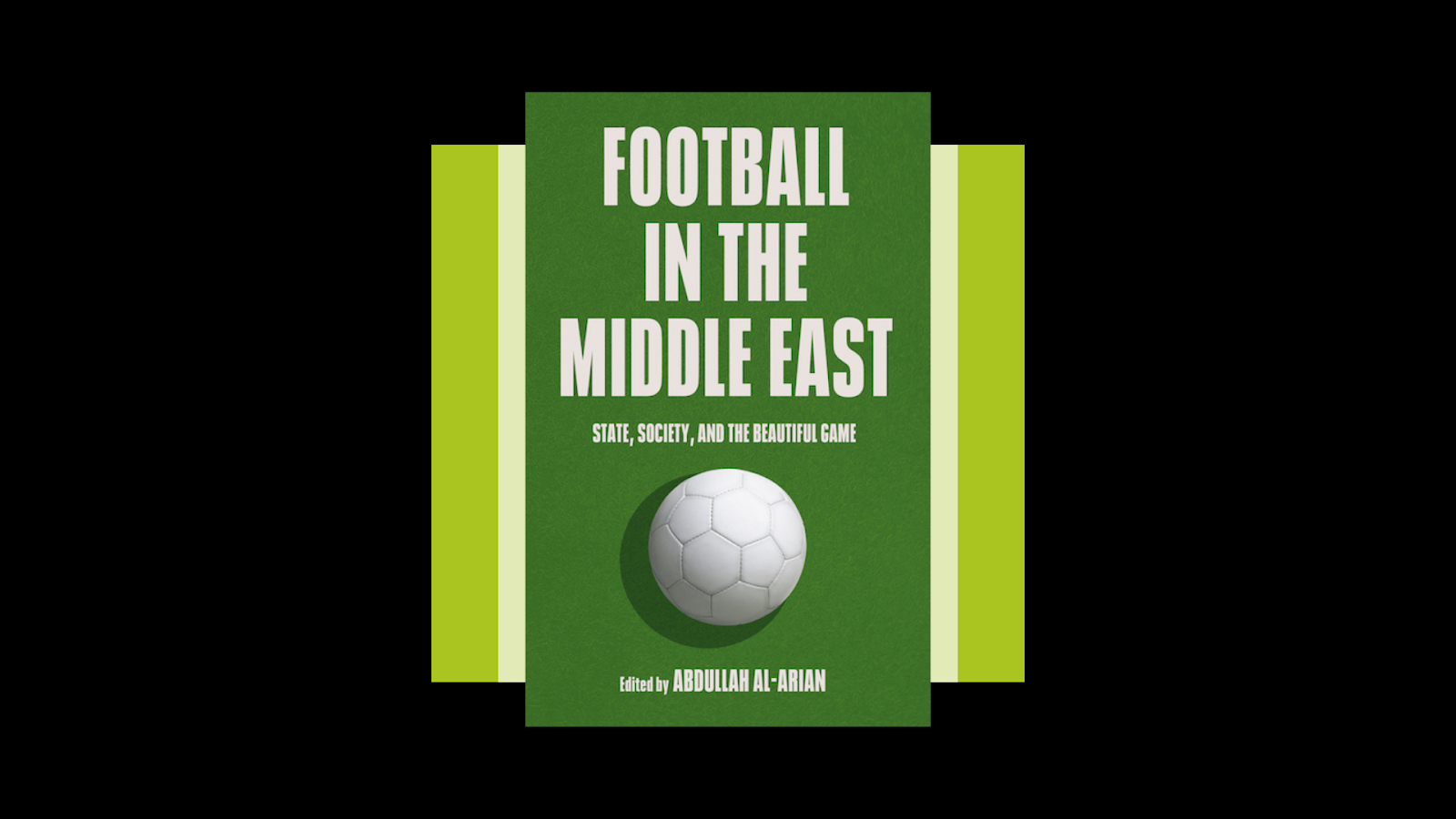 The team covered another book by an ASI team member, co-editor of Jadaliyya’s Critical Currents in Islam Page, Abdullah Al-Arian, who published his book from Hurst Publishers titled, “Football in the Middle East: State, Society, and the Beautiful Game.” Last week, ASI co-sponsored a lecture where Abdullah addresses some of the questions found in the book.

This book examines the complex questions raised by the phenomenon of football as a significant cultural force in the Middle East, as well as its linkages to broader political and socioeconomic processes. It also introduces original research questions that promise to open new directions for the study of football in the Middle East.

Abdullah Al-Arian shares what examining the sport of football can explain regarding the current political moment in the Middle East, and in what ways the study of the sport is currently lacking.

Sextarianism: Sovereignty, Secularism, and the State in Lebanon 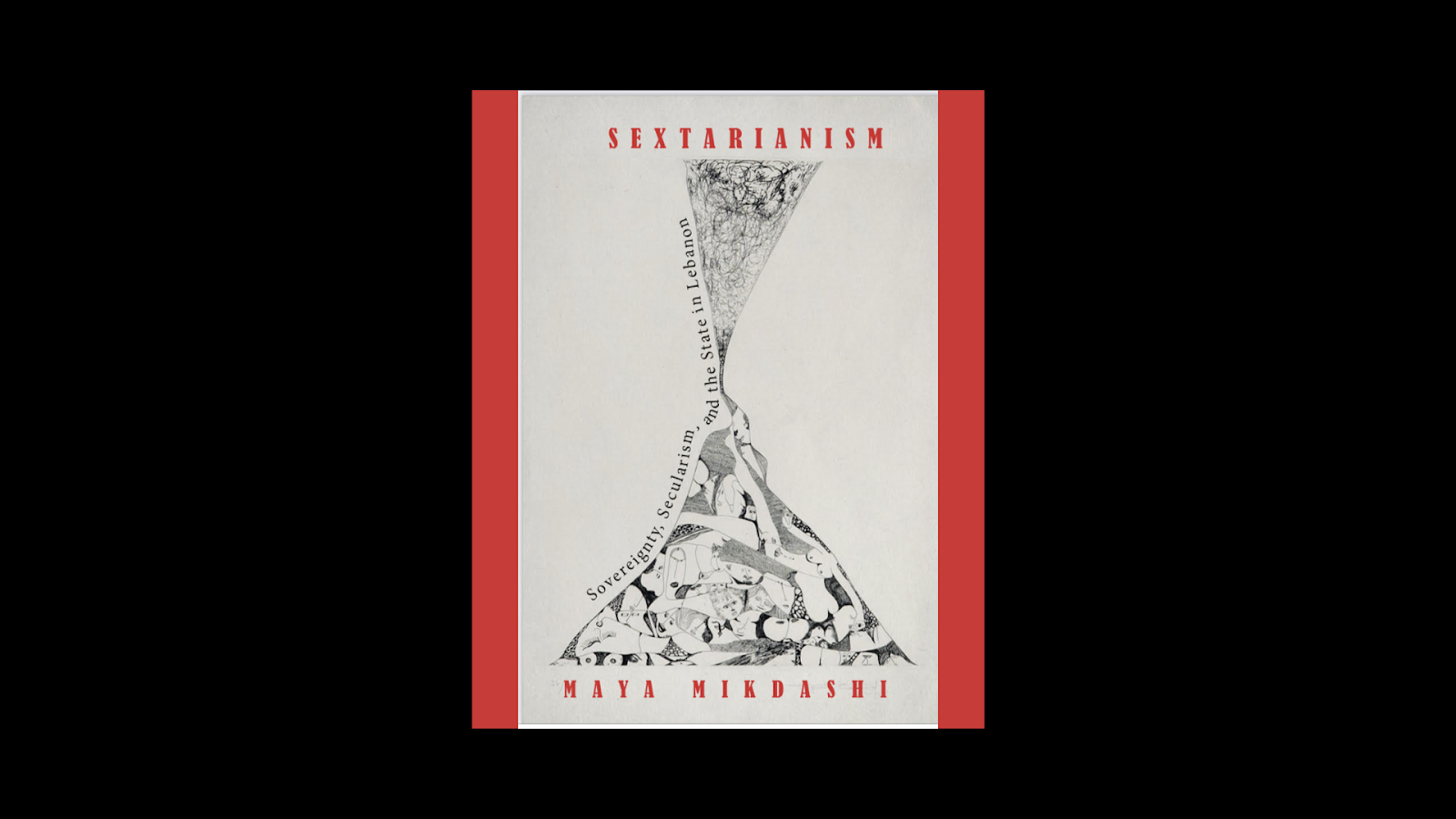 Maya Mikdashi, who is a co-founding Editor at Jadaliyya and Associate Professor at Rutgers University, recently published her first book, “Sextarianism: Sovereignty, Secularism, and the State” in Lebanon from Stanford University Press.

Nadya Sbaiti, who co-moderated the event with Bassam, speaks on the significance of Maya’s arguments in her book, and how the book challenges dominant discourse on state power in the region. 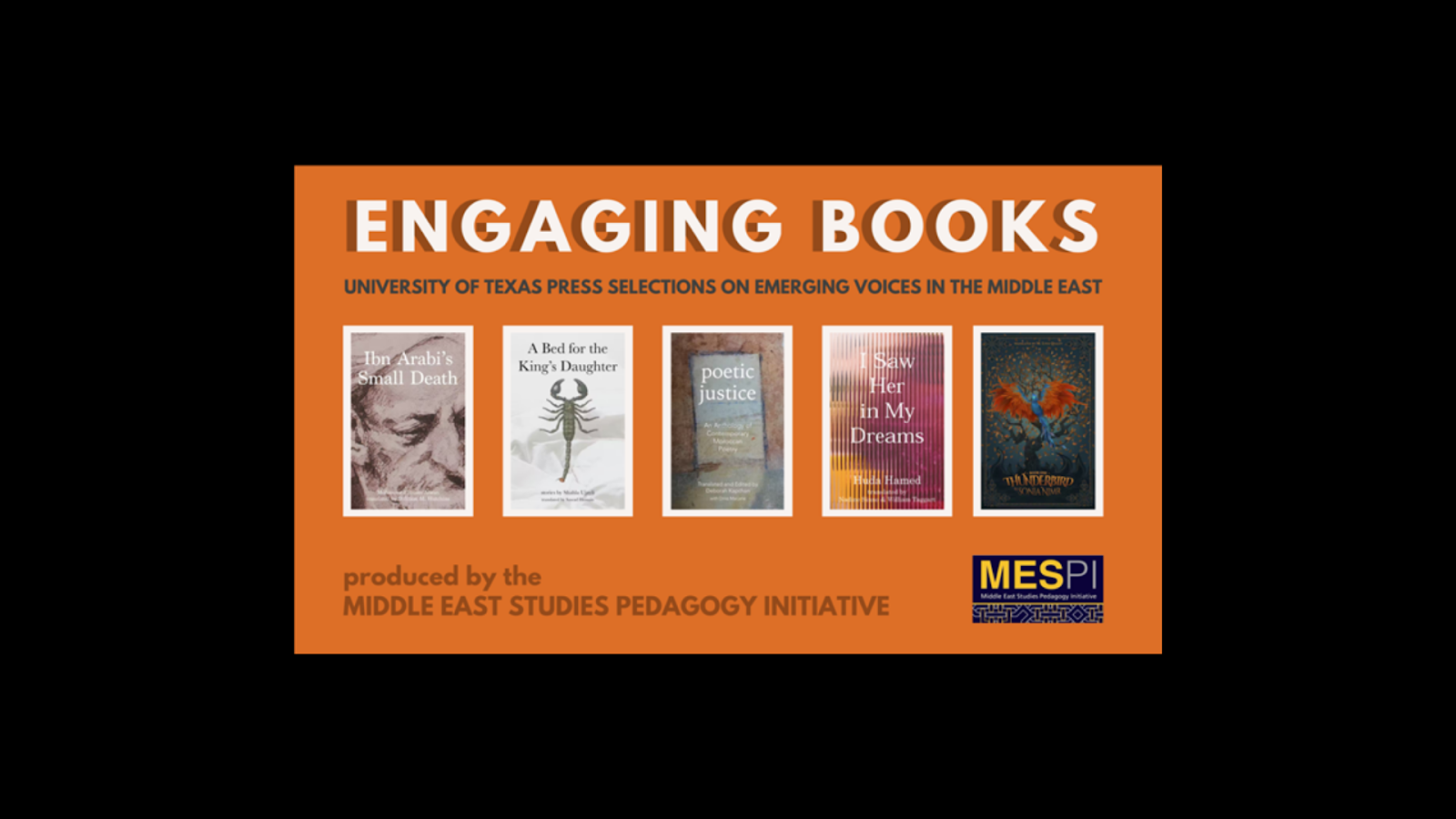 The Middle East Studies Pedagogy team has published a new installment of the Engaging Book series. For those that don’t know, Engaging Books is a monthly series featuring new and forthcoming books in Middle East Studies from publishers around the globe. Each installment highlights a trending topic in the MENA publishing world and includes excerpts from the selected volumes.

This month’s installment involves a selection from University of Texas Press on the theme of Emerging Voices in the Middle East. It discusses five books from up-and-coming writers in the region, including novels, poetry anthologies, short fiction collections, and historical fiction. 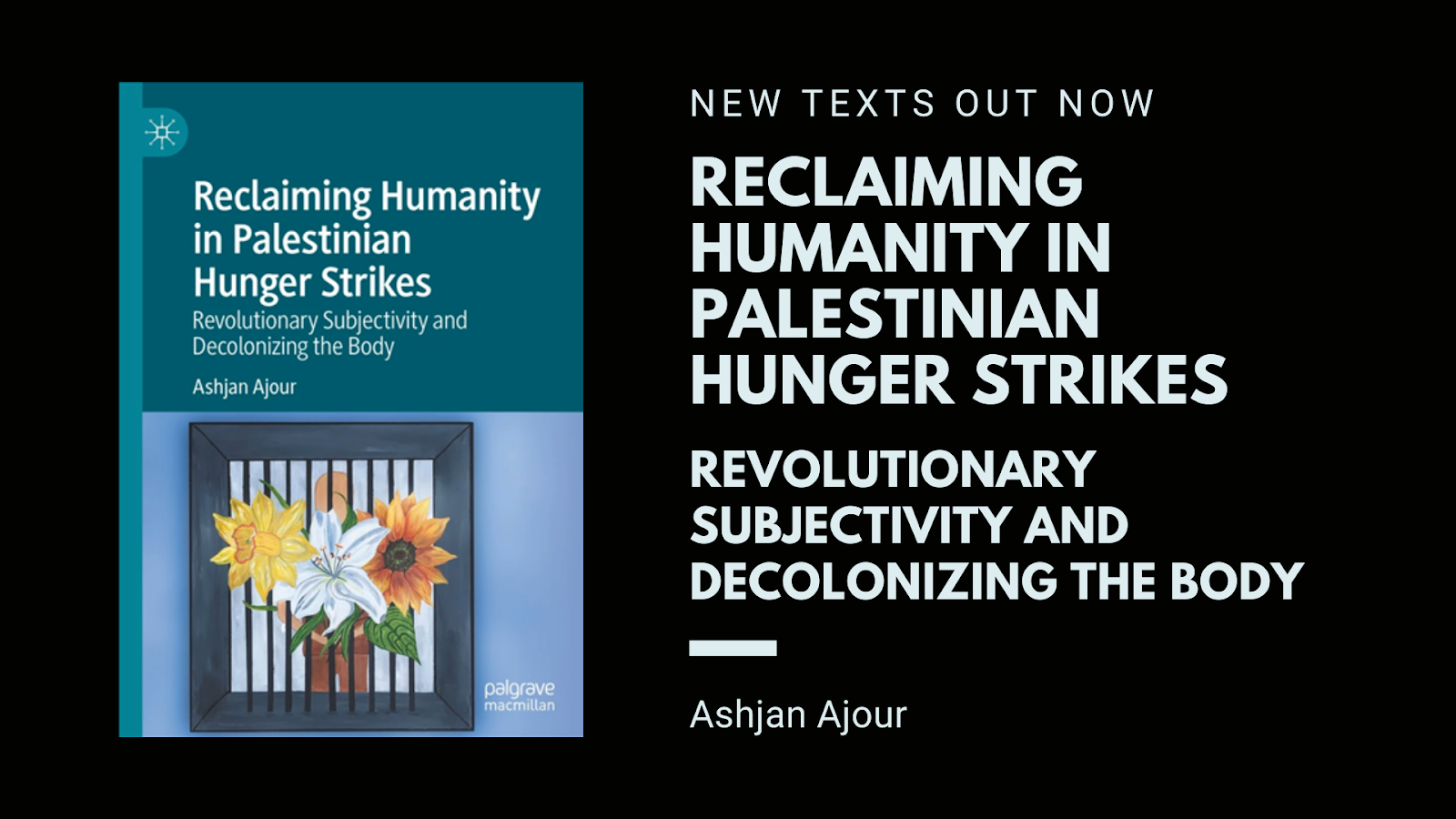 Ashjan Ajour’s “Reclaiming Humanity in Palestinian Hunger Strikes: Revolutionary Subjectivity and Decolonizing the Body,” seeks to articulate the hunger striker’s own philosophy of freedom and the weaponization of their bodies. The book argues that the hunger strikers, in their interaction with the dispossession of the colonial power, invent “technologies of the self” to challenge and transcend the colonial power. 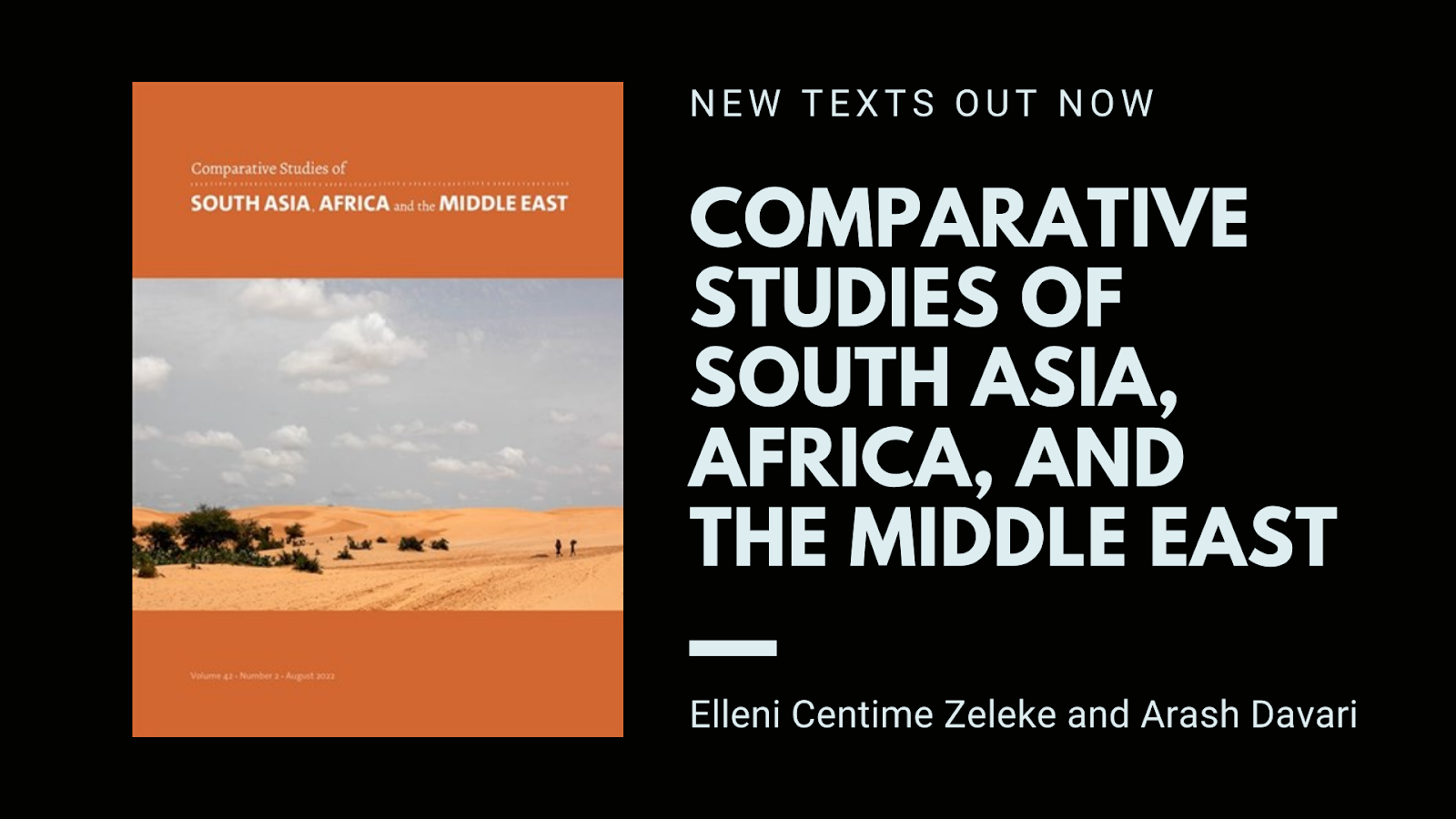 Elleni Centime Zeleke and Arash Davari recently co-edited a special issue of the journal, Comparative Studies of South Asia, Africa and the Middle East. They also co-wrote the introduction, titled “Third World Historical: Rethinking Revolution from Ethiopia to Iran,” where they look at the revolutionary history of both countries and attempt to answer the question, “How can we imagine a project that is equally anti-colonial and anti-imperialist while also enacting a commitment to democracy?” 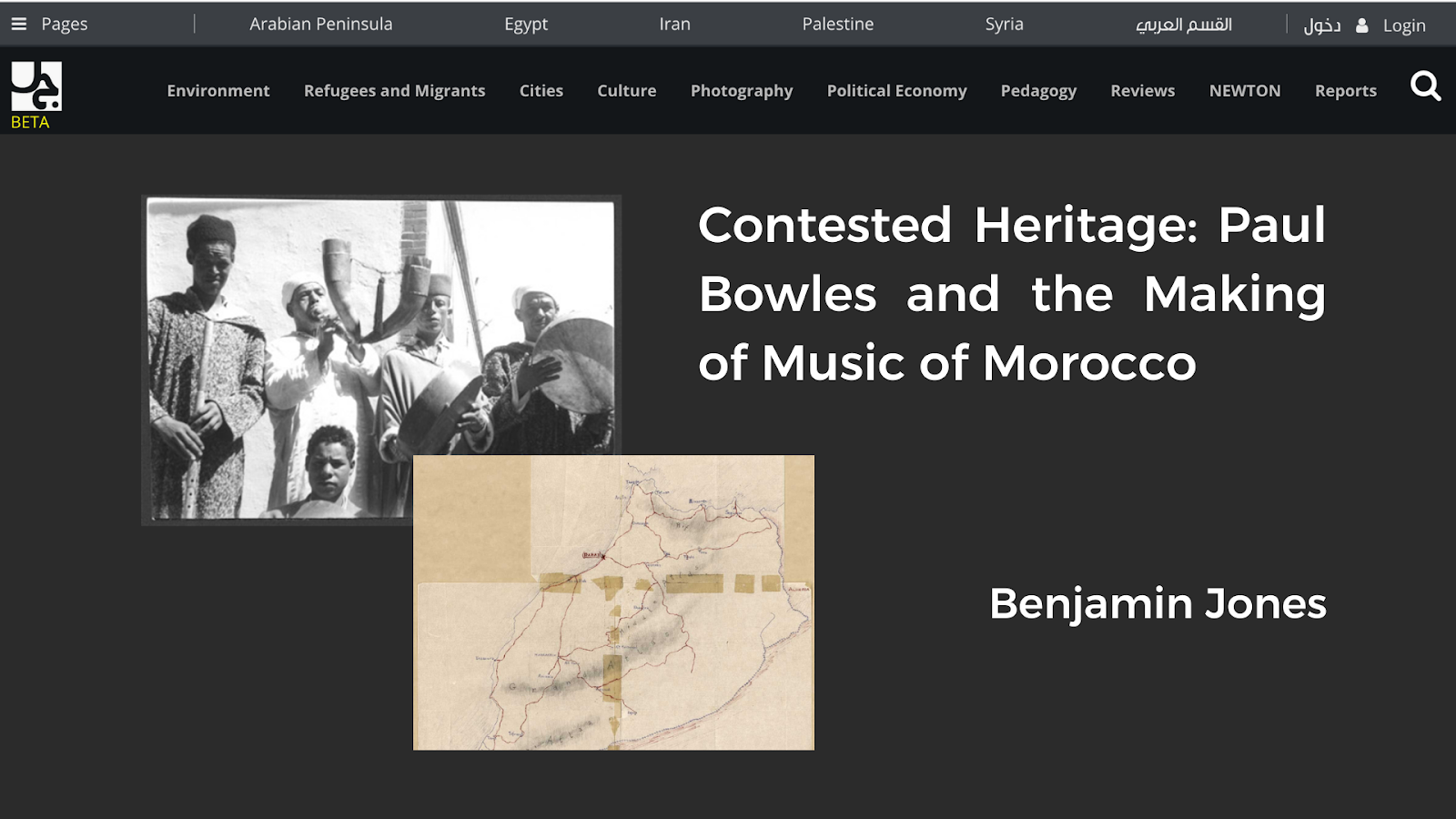 In a piece titled, “Contested Heritage: Paul Bowles and the Making of Music of Morocco,” Benjamin Jones problematizes the decades-old ethno-musicological survey by writer Paul Bowles to “save” Amazigh folk culture and music.

Jones demonstrates how Bowle’s attempts were steeped in an orientalist and exploitative perception of the region, and is something that requires redress by institutions such as the Library of Congress. 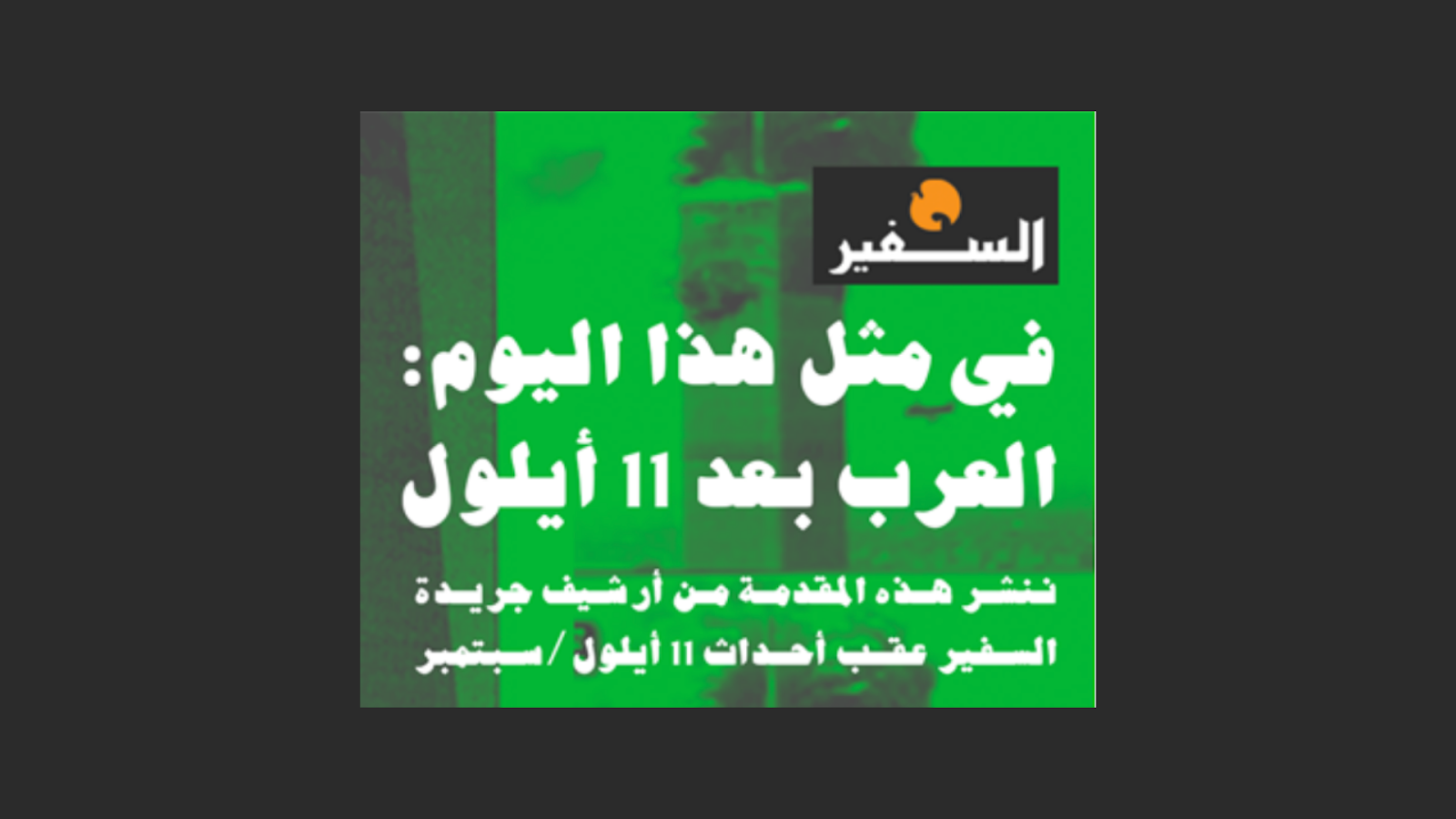 Jadaliyya’s Arabic page published another installment of the “On This Day” series, which is a collaboration with the Lebanese Assafir newspaper. This installment marks 11 years since 9/11, and features articles pulled from Assafir’s archives covering the attacks, their aftermath, and the effect on Arabs and the region.