This month, co-hosts MK Smith and Bassam Haddad highlighted the recent coverage of the protests in Iran by Jadaliyya’s Iran Page, a piece on Afghanistan and the Left, the upcoming Fall 2022 Issue of the Arab Studies Journal, several new episodes of the Connections Podcast, an event on the historical role of protest in Jordan, pedagogy, new texts out now, and must-read recommendations. 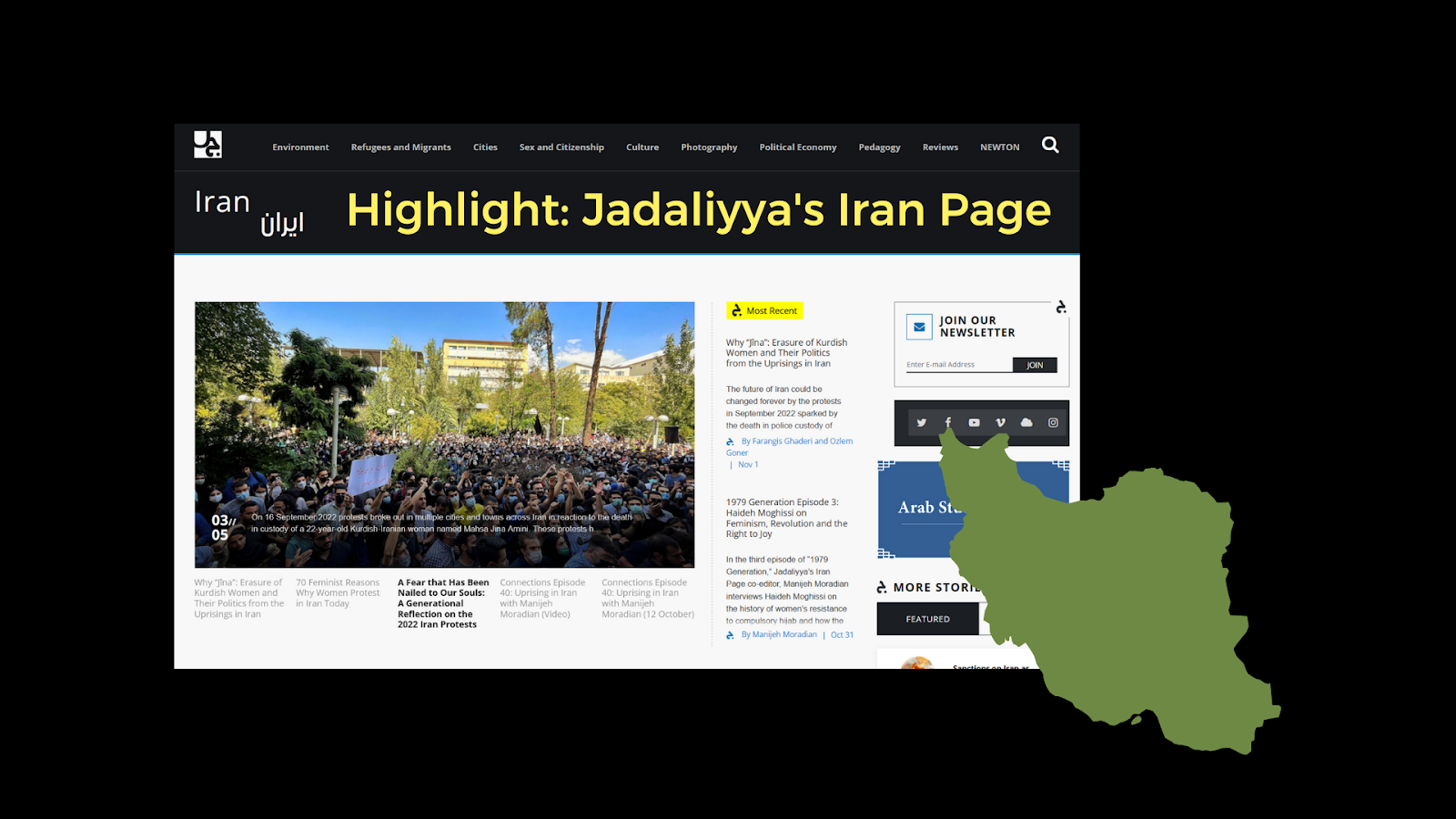 It has been over a month since anti-government protests broke out in Iran after the death of Kurdish-Iranian woman, Mahsa Jin Amini, while in police custody. In that time, Jadaliyya’s Iran page has been working diligently, putting out a number of pieces addressing various aspects of the protest movement and the politics surrounding it.

We want to commend the Iran Page for their dedicated work during this time, as the work they’re putting out provides much-needed depth for the current moment. Two of the Iran Page’s co-editors, Catherine Sameh and Naveed Mansoori, joined the show to discuss developments and their recent coverage of the protests.

Jadaliyya Iran Page Co-Editors Catherine Sameh and Naveed Mansoori discuss how the protest movement has progressed over the last month, and share some of the insights that can be found in the pieces published by the Iran Page.

Grievance as Movement: A Conversation on Knowledge Production on Afghanistan and the Left 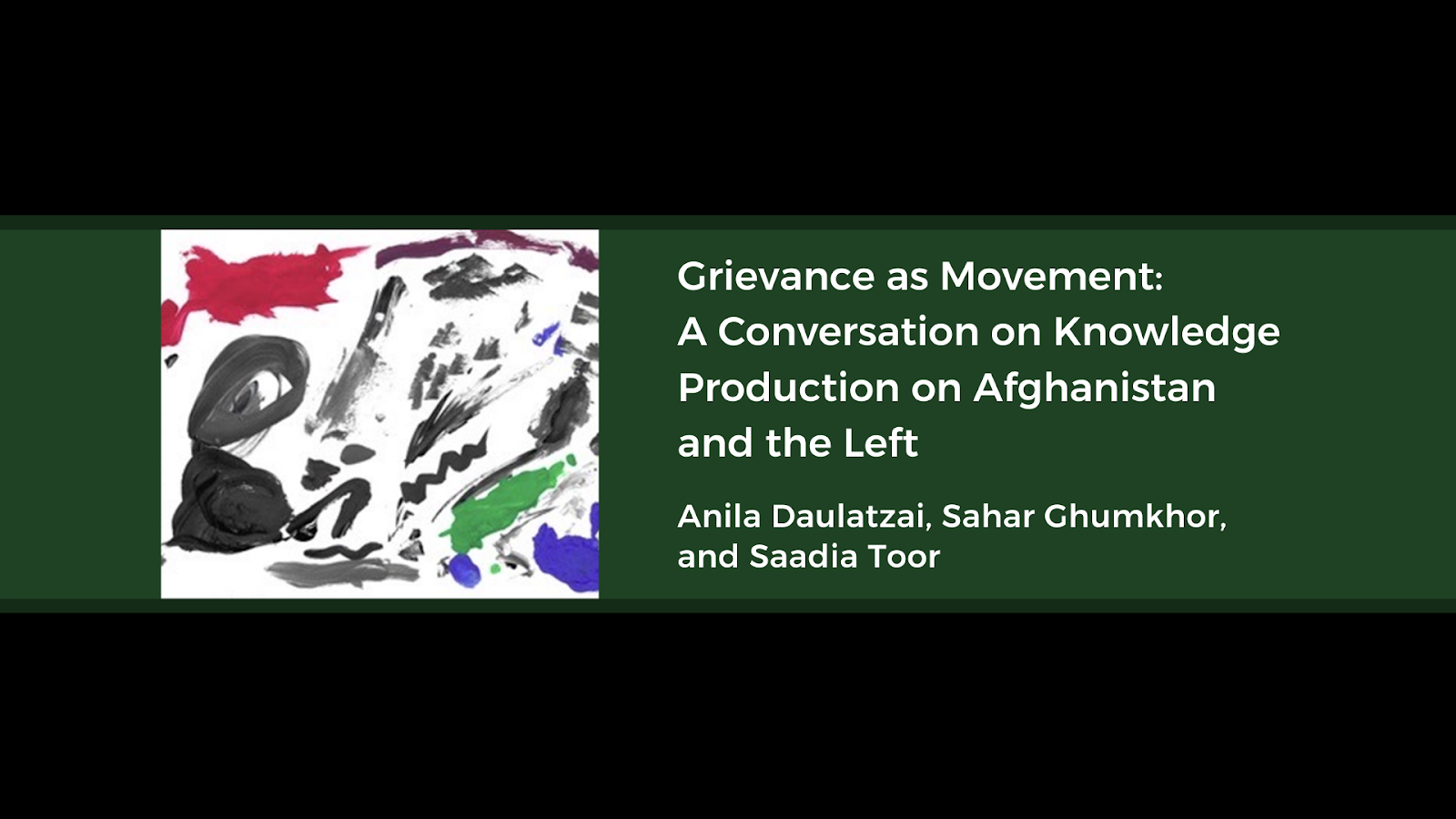 Earlier last month, to mark 21 years since the US invasion of Afghanistan, Anila Daulatzai, Saadia Toor, and Sahar Ghumkhor wrote a piece for Jadaliyya titled “Grievance as Movement: A Conversation on Knowledge Production on Afghanistan and the Left.” Here, Anila, Sahar, and Saadia discuss the various shortcomings demonstrated by the Left in their engagement with Afghanistan and its history.

The piece is an important read for anyone who felt concerned by the discourse surrounding the US’ withdrawal from Afghanistan, be it from those who were “disappointed” by the lack of results of the US’ efforts, or from those touting the withdrawal as an anti-imperialist victory. 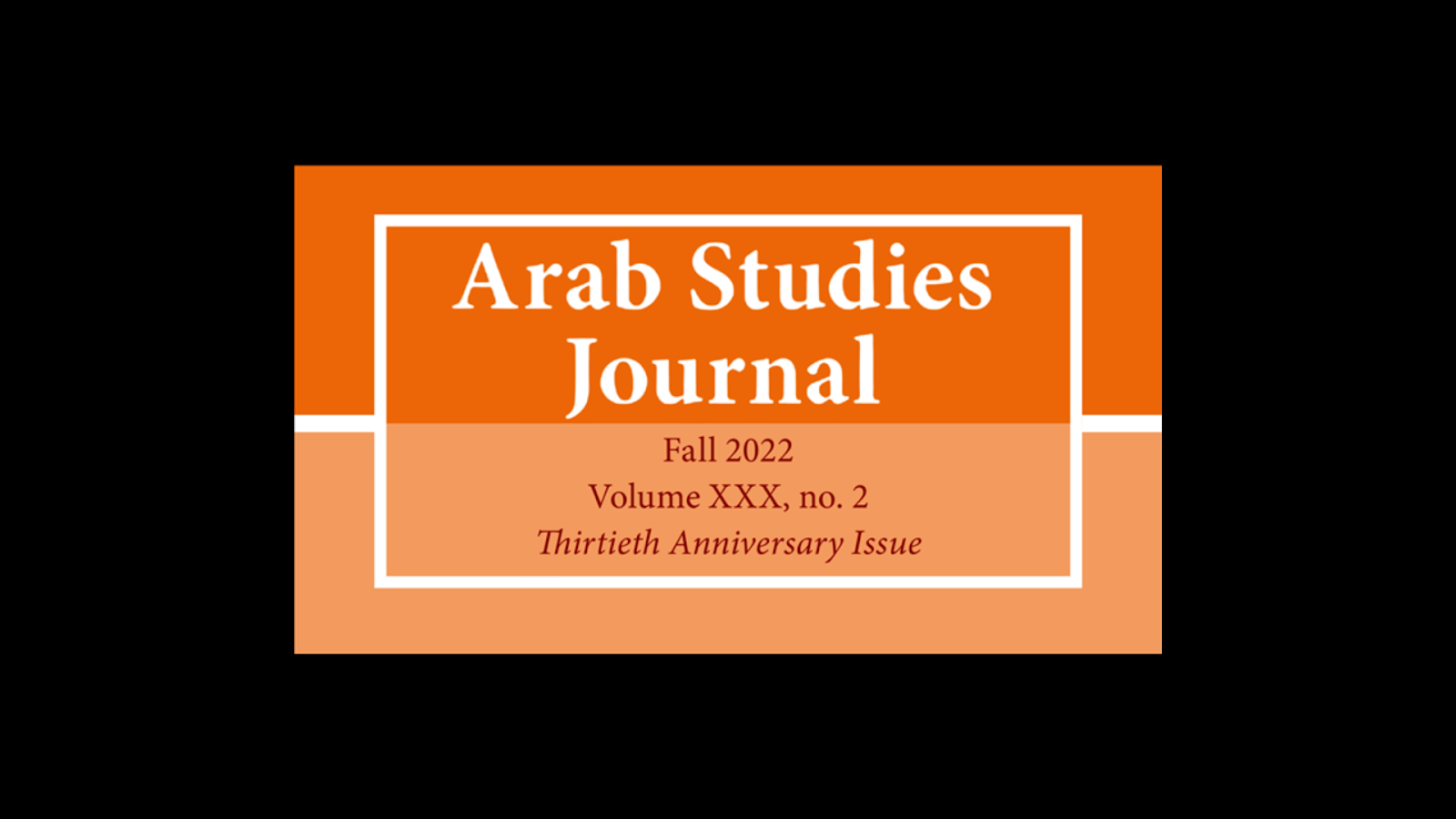 We are happy to announce that the Fall 2022 Issue of the Arab Studies Journal will be released on December 1st! To bide us over until then, the Editor’s Note and Table Contents for the issue were published on Jadaliyya.

This issue presents  a stellar collection of articles, essays, and reviews that provide new perspectives on vital questions of capitalism, nationalism, and the environment. The issue also includes an essay section titled “Critical Environmental Perspectives in Middle East Studies,” as well as another robust reviews section. 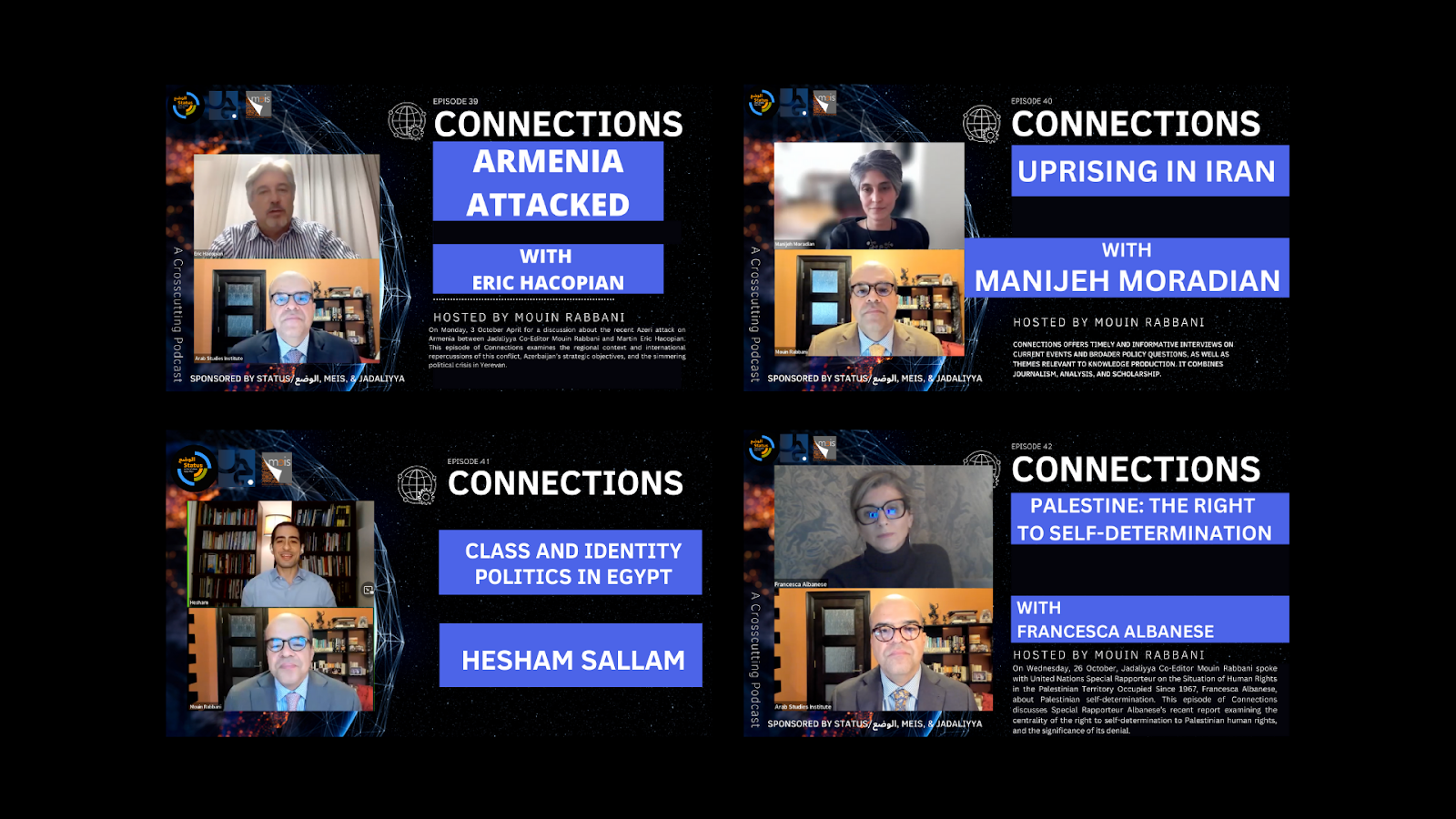 As always, Mouin brings us timely and incisive discussions on urgent matters, and over the course of the last month, covered topics ranging from the Palestinian Right to Self-Determination, Class and Identity Politics in Egypt, the Uprising in Iran, and the attacks on Armenia.

Protesting Jordan: Geographies of Power and Dissent with Jillian Schwedler 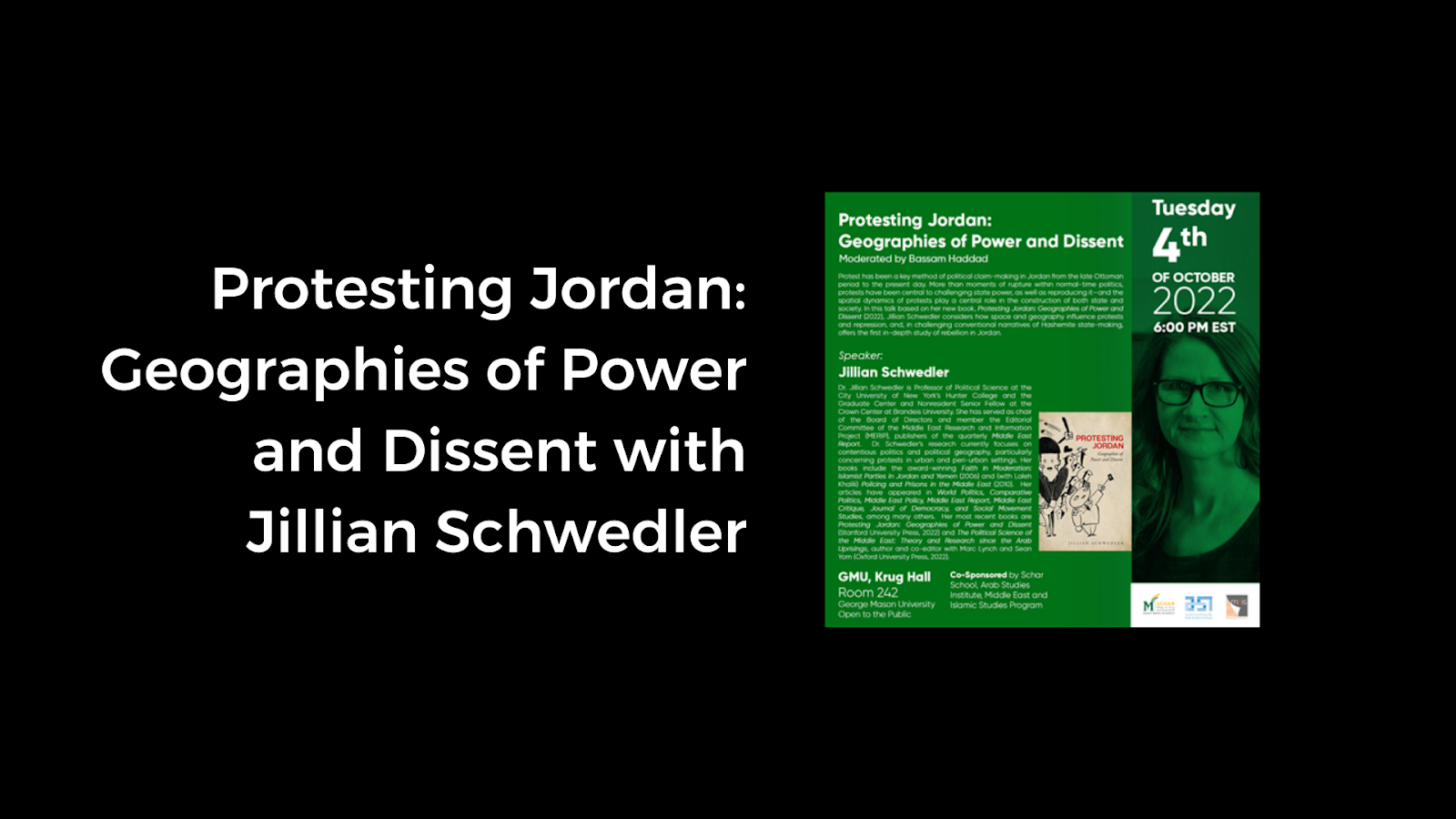 In an event co-sponsored by ASI and George Mason University’s Schar School of Policy and Government, Jillian Schwedler, who is Professor of Political Science at the City University of New York’s Hunter College and the Graduate Center and Nonresident Senior Fellow at the Crown Center at Brandeis University, discussed her new book titled “Protesting Jordan: Geographies of Power and Dissent.”

In her book, Jillian Schwedler considers how space and geography influence protests and repression, and by challenging conventional narratives of Hashemite state-making, offers the first in-depth study of rebellion in Jordan, arguing that protest has been a key method of political claim-making in Jordan from the late Ottoman period to the present day.

Jillian Schwedler discusses how her book challenges conventional narratives of Hashemite state-making, and how space and geography interact in the Jordanian context to influence protest and repression. 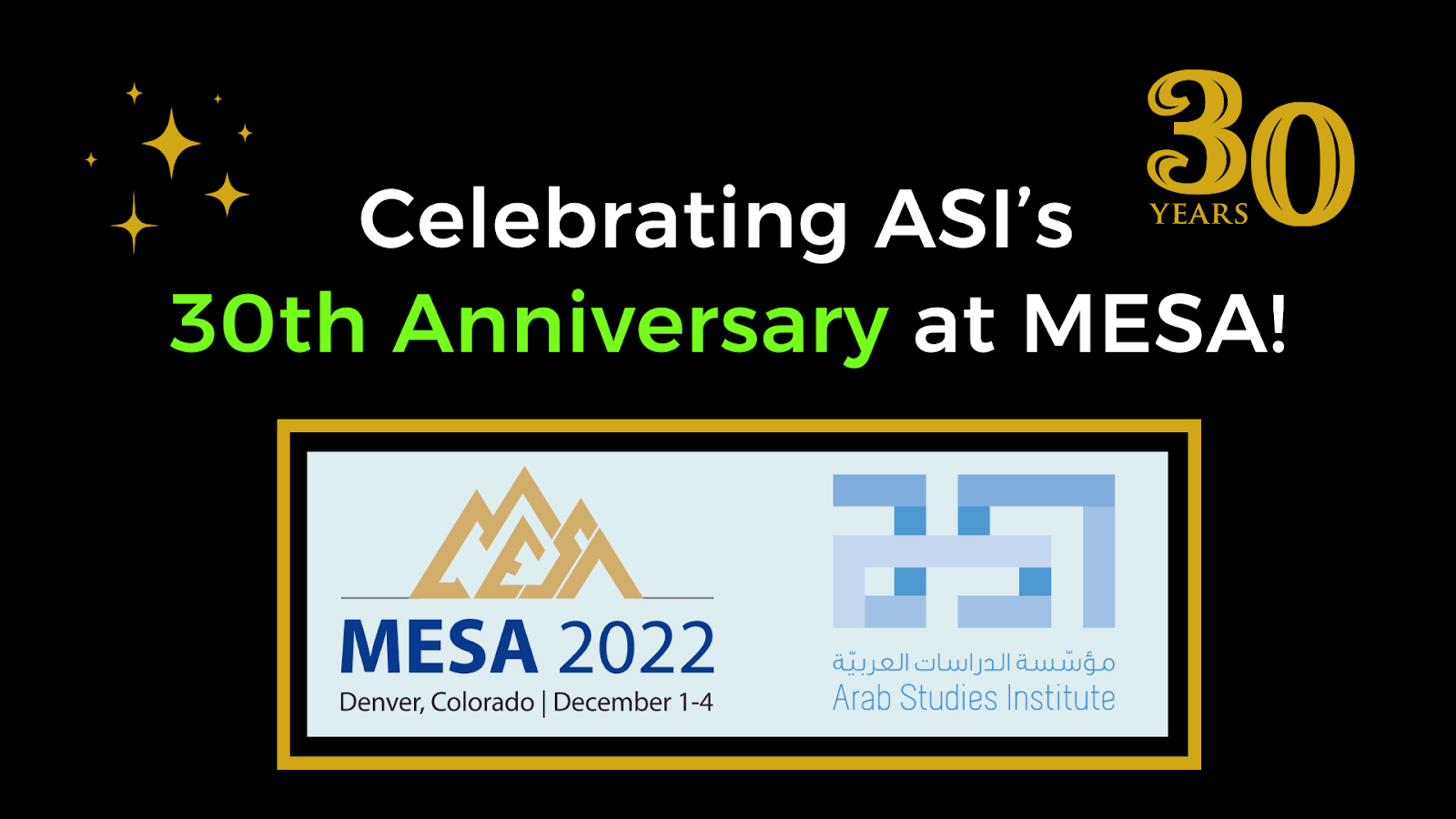 It’s that time of year again, with the Middle East Studies Association’s conference right around the corner!

MESA’s 56th Annual Meeting will take place December 1-4 in Denver, and we hope to see you there as we celebrate 30 years of ASI. 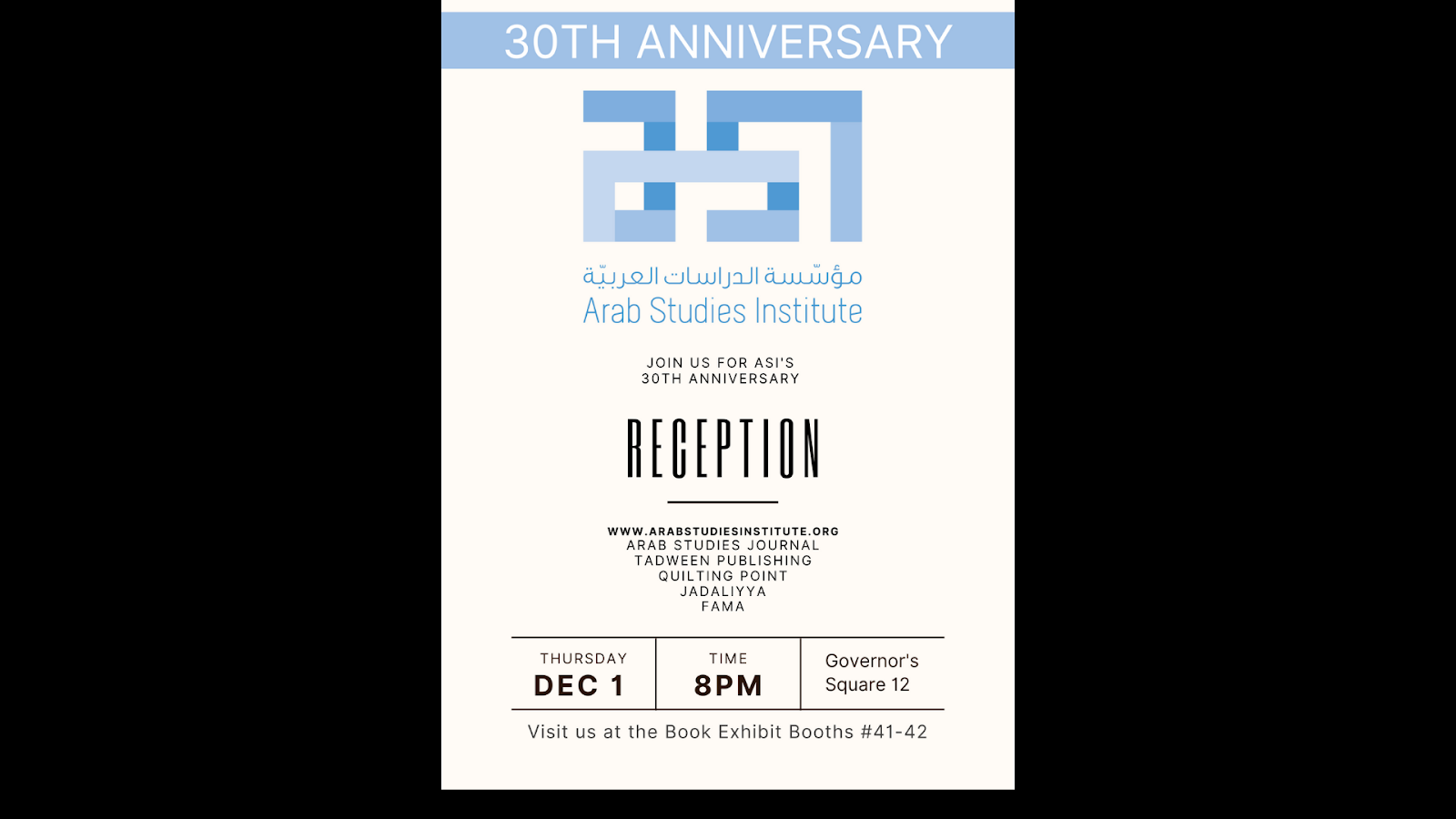 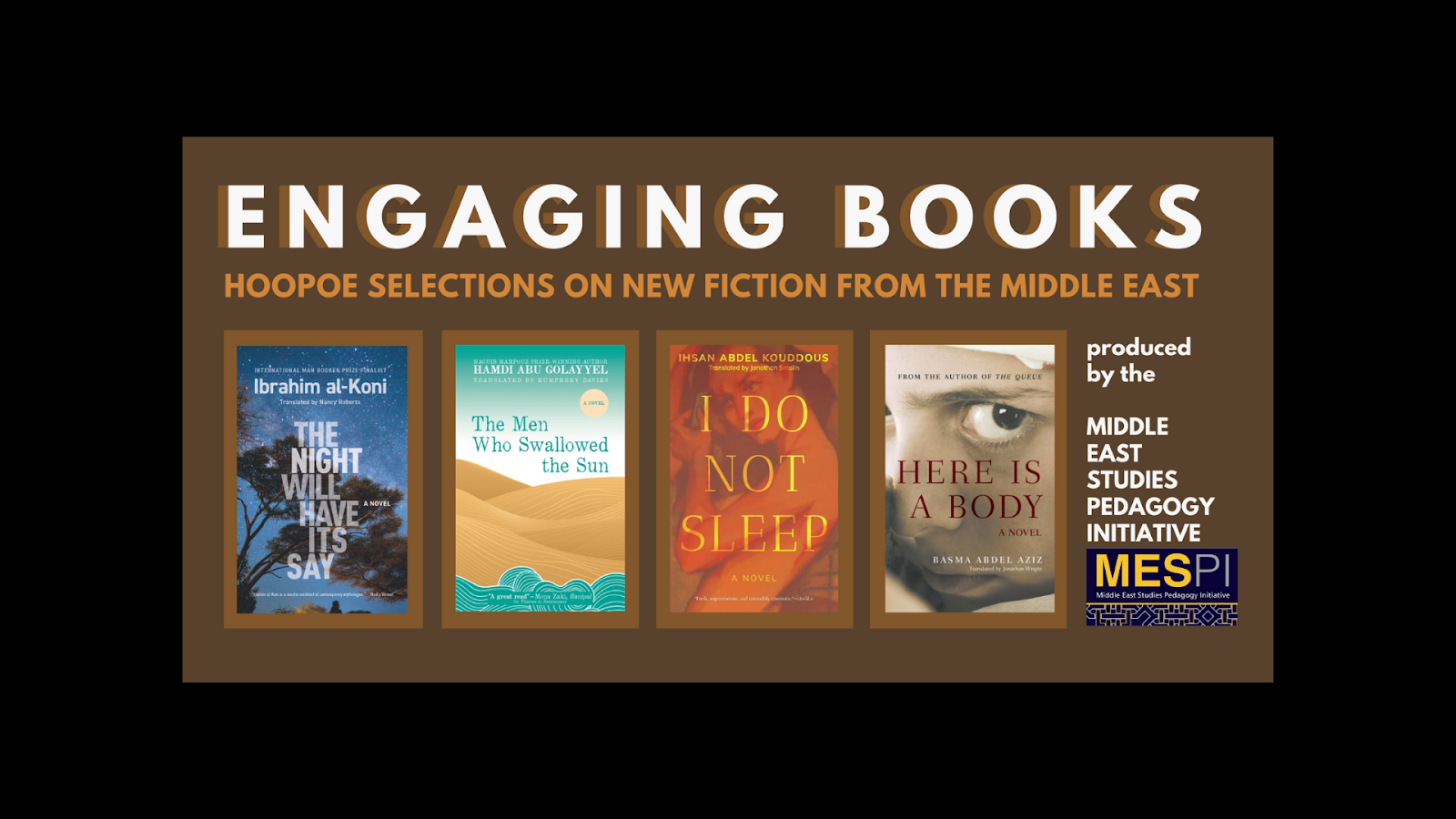 Each installment highlights a trending topic in the MENA publishing world and includes excerpts from the selected volumes. This installment covers information and an overview of four new pieces of fiction from the region. 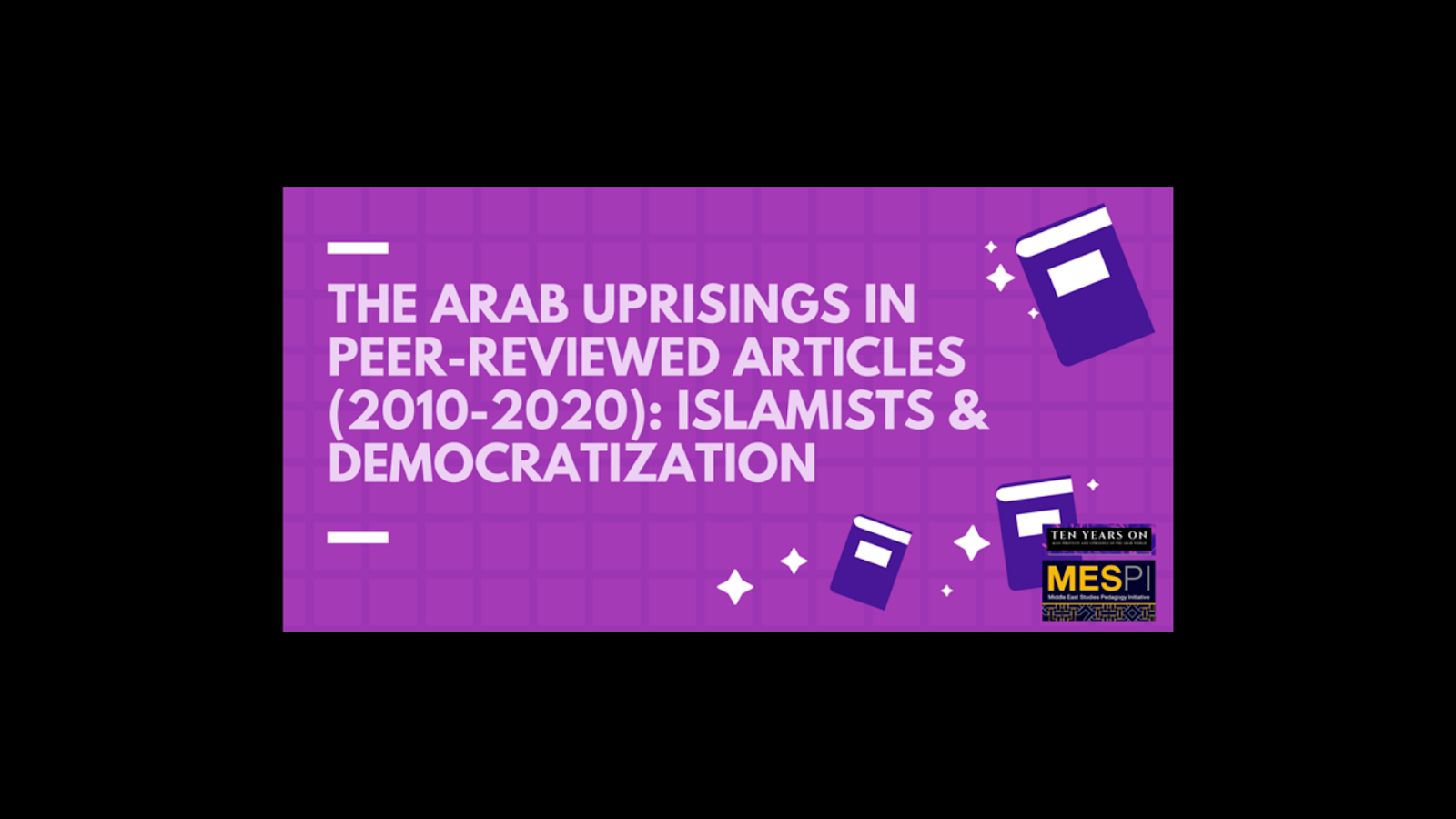 The MESPI team also put out a new installment of the Arab Uprisings in Peer-Reviewed Articles Review series. This is the fourth of six parts of a series that presents peer-reviewed articles concerned with the Arab uprisings published in 2010-2020 from our peer-reviewed articles database, with this part covering the topic of Islamists and Democratization. 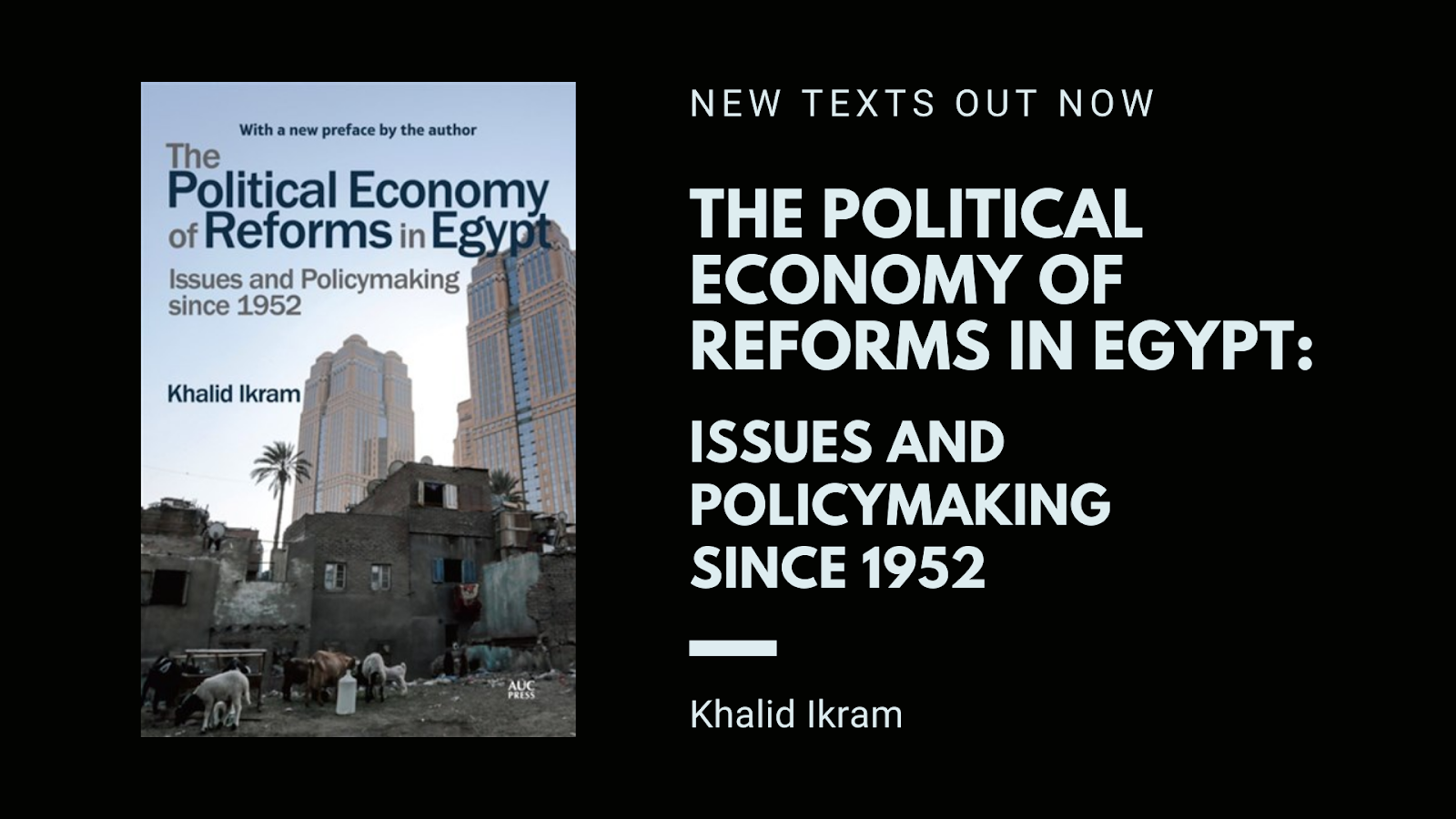 In his book “The Political Economy of Reforms in Egypt,” Khalid Ikram draws on his experience working on Egypt for the World Bank to illuminate the political economic factors that shaped Egyptian reforms since 1952. The discussion includes the role of interest groups, foreign actors, military crises, political institutions, among others throughout the administrations of Nasser, Sadat, and Mubarak. 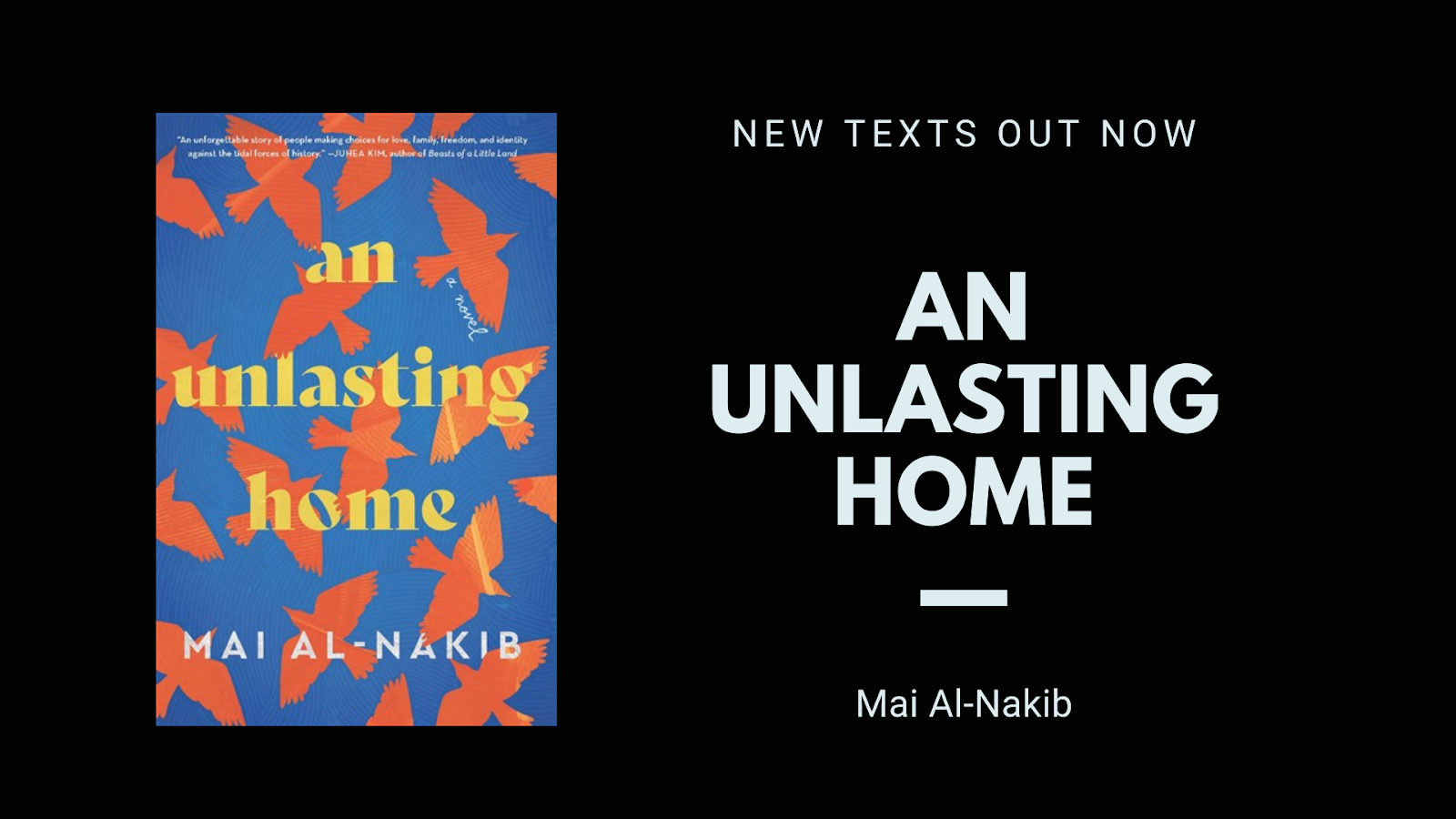 Mai Al-Nakib’s new novel, “An Unlasting Home,” is a multigenerational saga that traces the lives of five formidable women from the early twentieth century to 2013, across Lebanon, Iraq, Kuwait, India, and the United States. This story is one of inherited trauma, migratory passage, loss, and resilience, and an exploration of a lost or forgotten Kuwait. 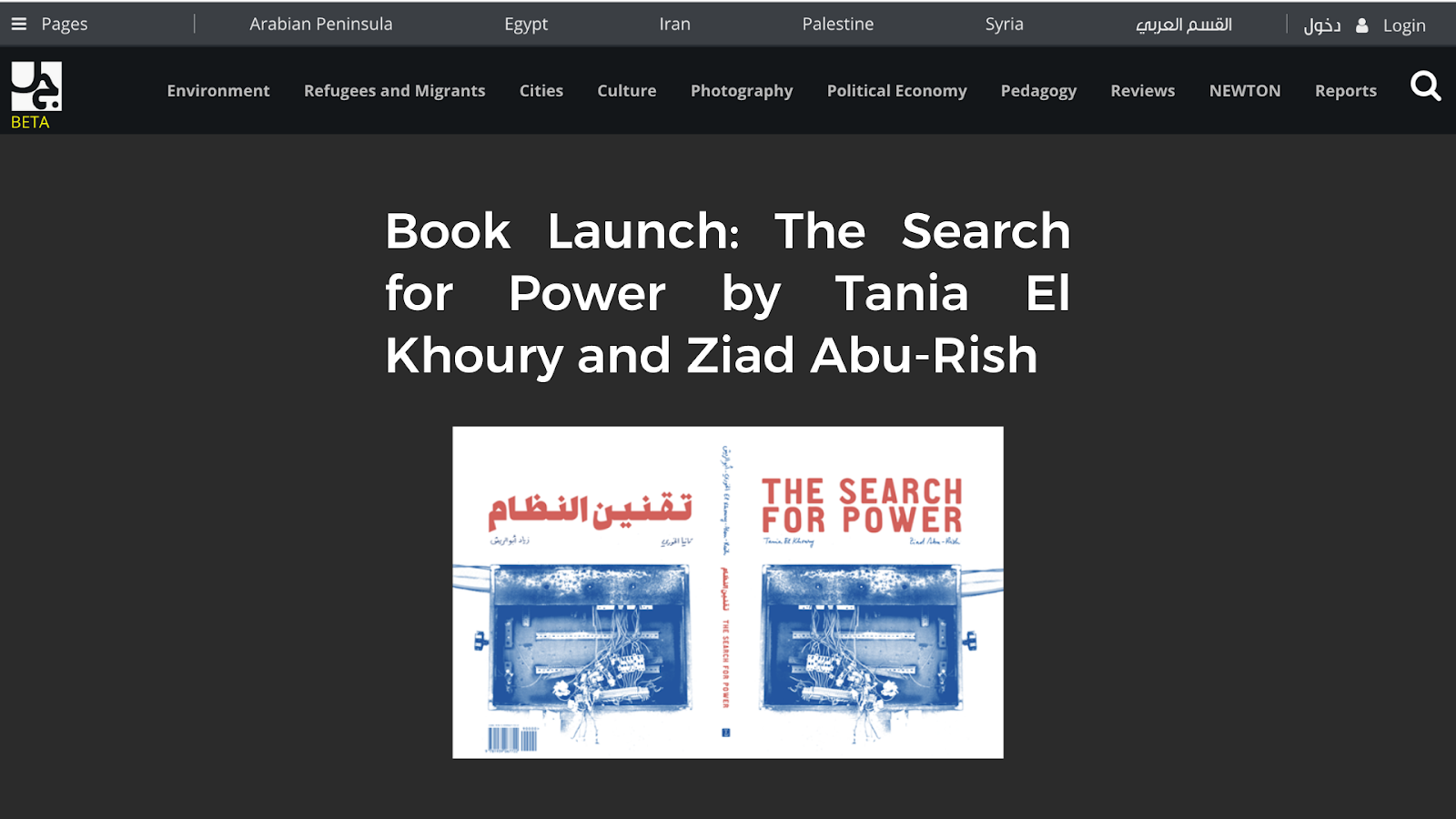 Tadween Publishing is excited to announce the near-release of “The Search for Power,” a new book by Jadaliyya Co-Editor Ziad Abu-Rish and Tania El-Khoury, who is Distinguished Artist in Residence of Theater and Performance and Director of the Center for Human Rights & the Arts at Bard College. This book follows their journey to document the history of electricity black-outs in Lebanon as their paper trail took them across five different countries and as far back as 1906.

ASI co-sponsored an event with George Mason University where Jadaliyya Co-Editor and associate professor in the department of History at UC Santa Cruz, Muriam Haleh Davis, discussed her new book titled “Markets of Civilization: Islam and Racial Capitalism in Algeria.”

In the talk, Davis discussed how the framework of racial capitalism might be expanded to reflect on the history of the French empire in North Africa, as well as the porous boundaries between race and religion in colonial and post-colonial Algeria.