The Arab Studies Institute is pleased to share with you the details of our participation at the 2019 Middle East Studies Association (MESA) Conference. The conference was held from 14 November - 17 November in New Orleans, Louisiana. The Arab Studies Institute’s presence was evident and widely felt throughout MESA. The larger MESA community was able to interact with the ASI team during many of the panels and important side meetings.

In addition to the thirteen sessions featuring ASI personnel, ASI co-sponsored two special sessions. The special sessions were titled:  “Feminist Conversation on Current Uprisings in the Middle East,” and “Uprisings Across Iraq, Lebanon, and Sudan.” Both special sessions were exceptionally engaging and some of the best-attended events of the weekend. Recordings of the sessions will be published soon on jadaliyya.com.

MESA attendees also engaged more directly with ASI by stopping at our booth at the Book Bazaar. Those who visited the booth were excited to learn more about ASI’s projects and publications. Importantly, the weekend provided an opportunity for ASI team members from around the world to connect with one another. Reconnecting allowed for productive strategizing sessions and discussions of how to best develop ASI, both internally and externally, such as the stellar Global Academy Project where ASI is a partner with MESA and other institutions, working with and supporting endangered scholars.  ASI’s recent developments were also shared with the larger MESA community at ASI’s reception and dance party, leaving a positive and energizing impression within our broader network and MESA audience.

Below is a breakdown of ASI’s activities at MESA. 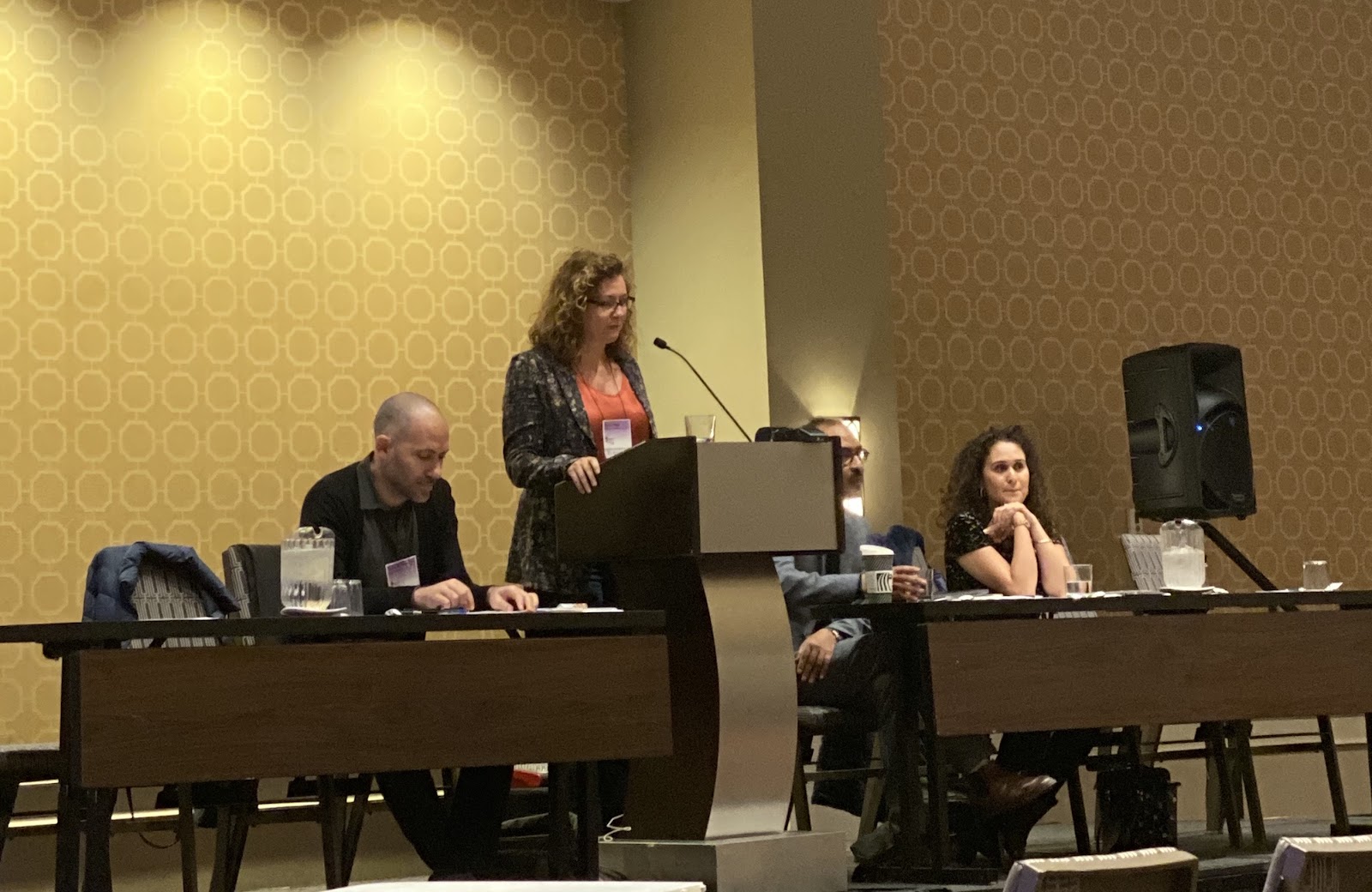 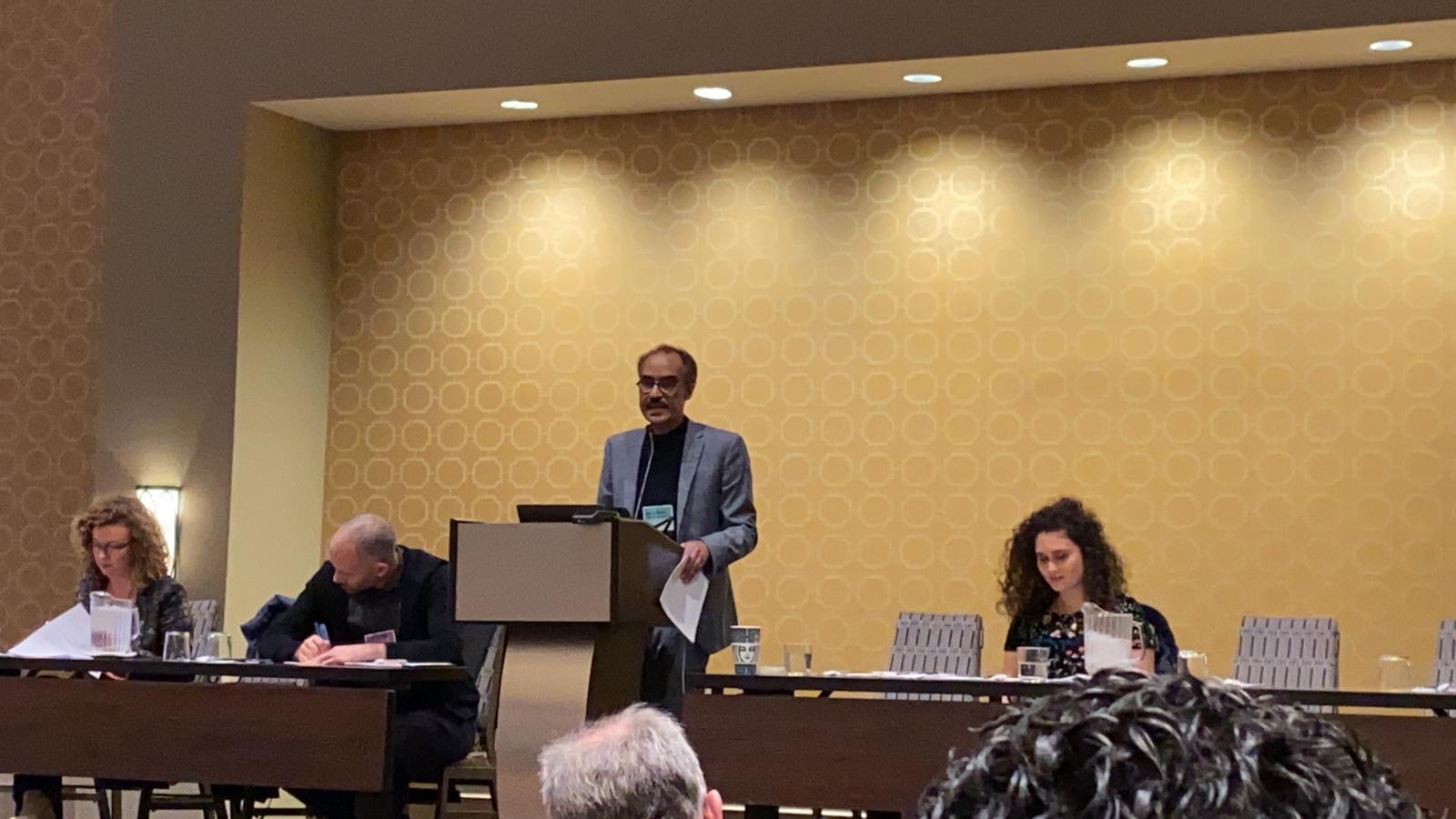 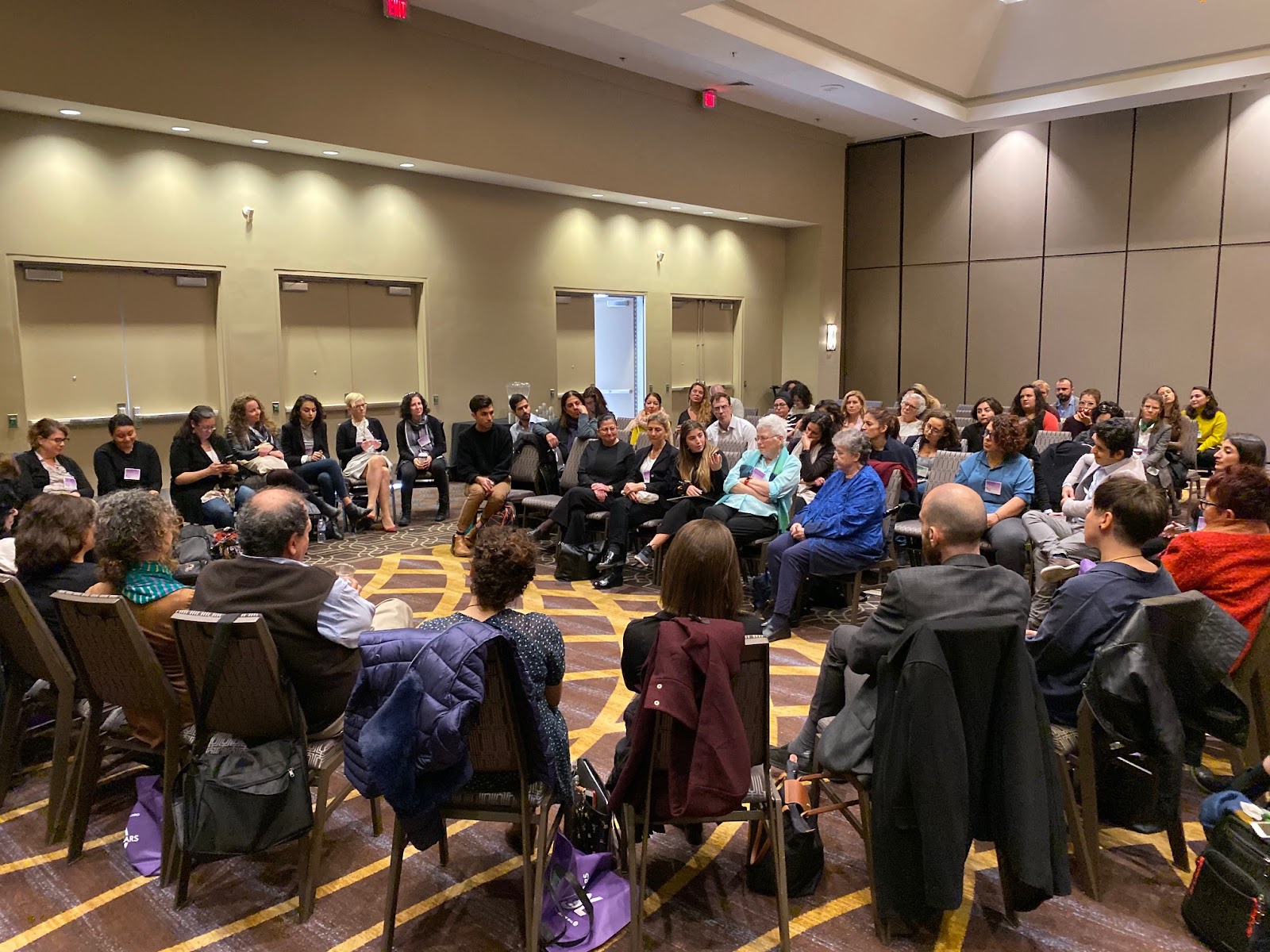 ASI also cosponsored a session titled, “Feminist Conversation on Current Uprisings in the Middle East.” The conversation, organized by Jadaliyya Co-Editor Maya Makdishi, created a space for MESA participants to discuss feminists’ participation and demands during the recent uprisings. 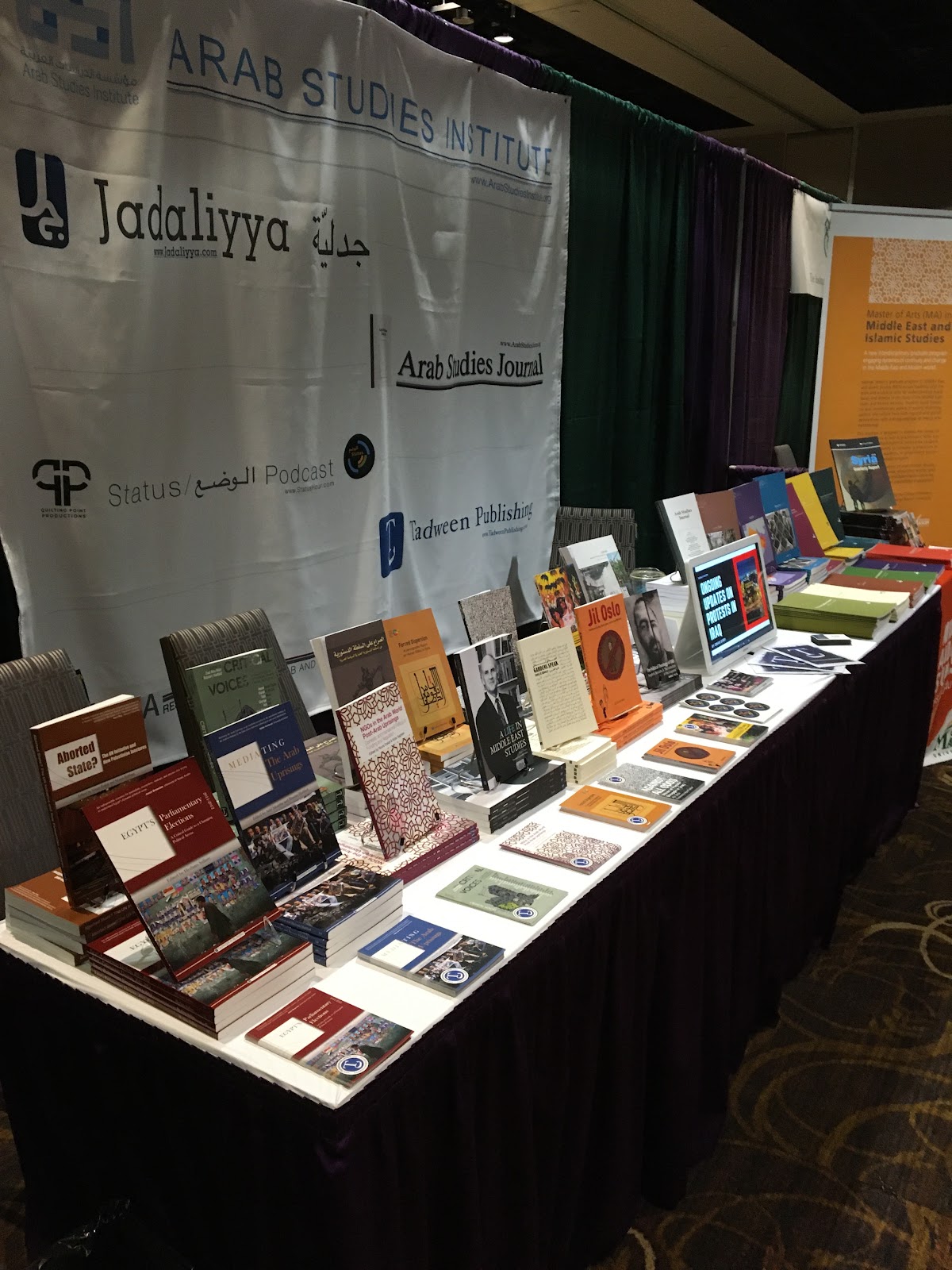 Our booth at the Book Bazaar proved to once again be a hit among the conference’s many attendees. Throughout the weekend, attendees stopped by to learn more about ASI’s many projects, such as the Knowledge Production Project, Middle East Studies Pedagogy Initiative, and Status Audio Magazine. Many attendees also purchased copies of our latest Tadween publications, including the Arab Studies Journal Fall 2019 Issue and the JadMag Spring 2019 Issue. 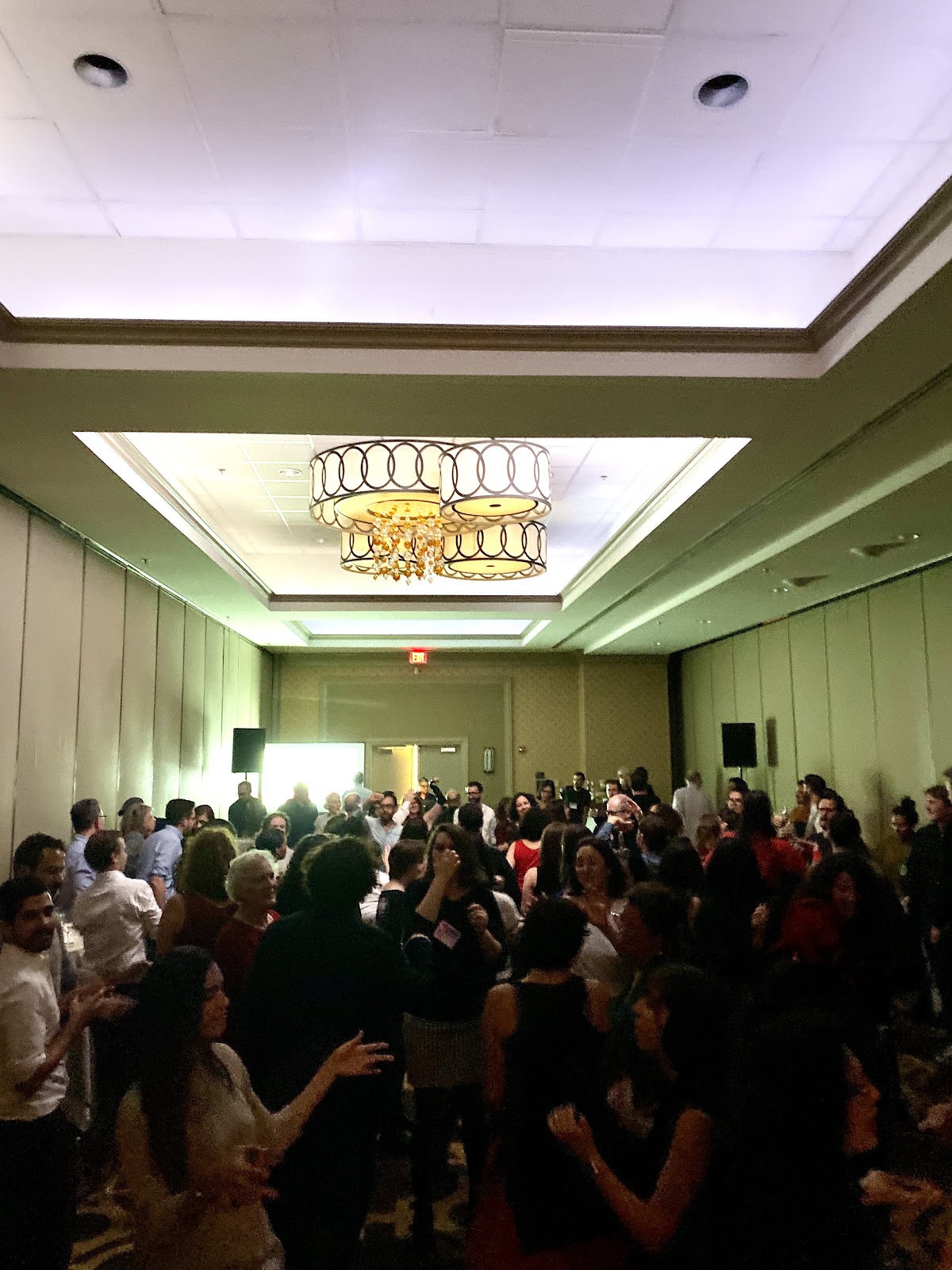 The ASI reception on Saturday the 16th was both an awesome celebration of all that ASI has accomplished in the past year, as well as a peek into the many exciting projects that will be rolled out in 2020. The excitement in the room was palpable as we announced the launch of Jadaliyya’s Gender and Sexuality Page, organized by Maya Mikdashi and the Sudan Page, organized by Khalid Medani. Tadween Publishing also introduced the upcoming JadMag Pedagogy Issue. 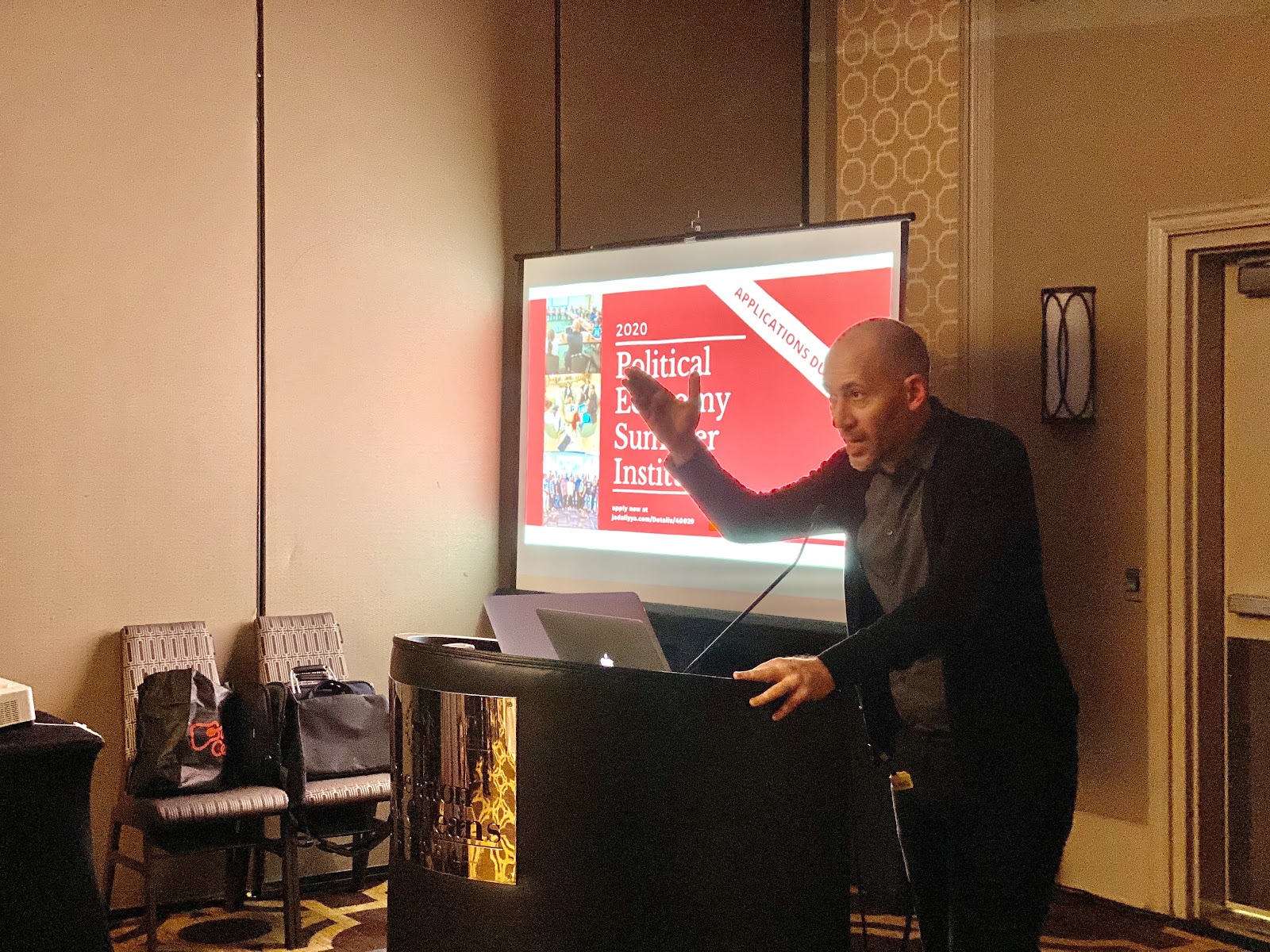 At the ASI reception, the Arab Studies Journal Editor, Sherene Seikaly, announced the  Arab Studies Journal Fall 2019 issue. We are proud to feature another collection of insightful articles that are theoretically rich and empirical grounded. Get your hands on a new copy of ASJ at Tadweenpublishing.com. 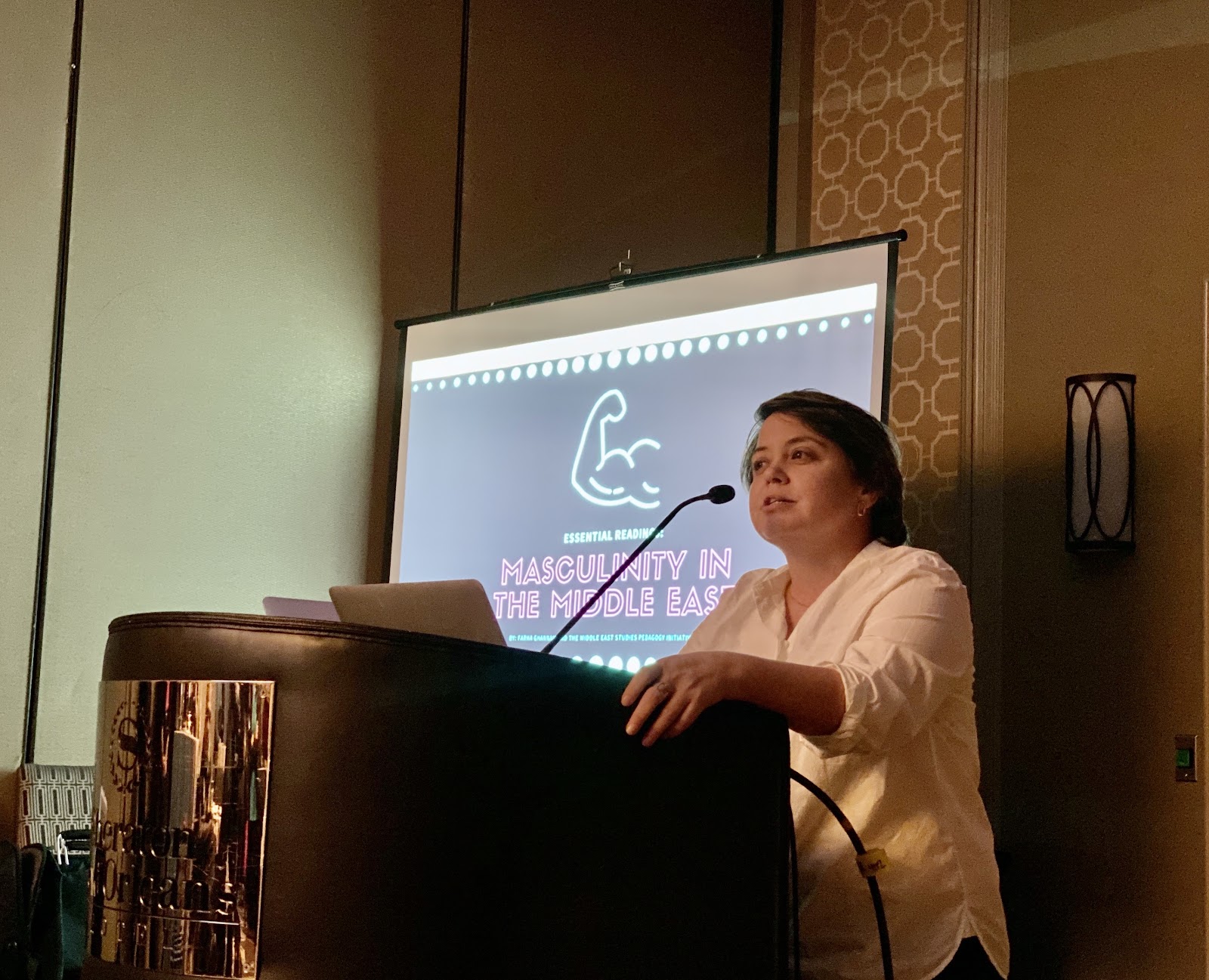 In the fall of 2019, Jadaliyya is celebrating its ninth anniversary! During the reception, Jadaliyya Co-Editor Ziad Abu Rish highlighted Jadaliyya’s many accomplishments in this past year. Not least of which was the launch of the Iran page and the expansion of the Refugees and Migrants Page. Looking toward the year ahead, Jadaliyya Co-Editor Maya Mikdashi announced the Gender and Sexuality Page on Jadaliyya. Co-founding Editor Bassam Haddad then announced Jadaliyya’s forthcoming Sudan Page. Both pages will be launched in 2020! 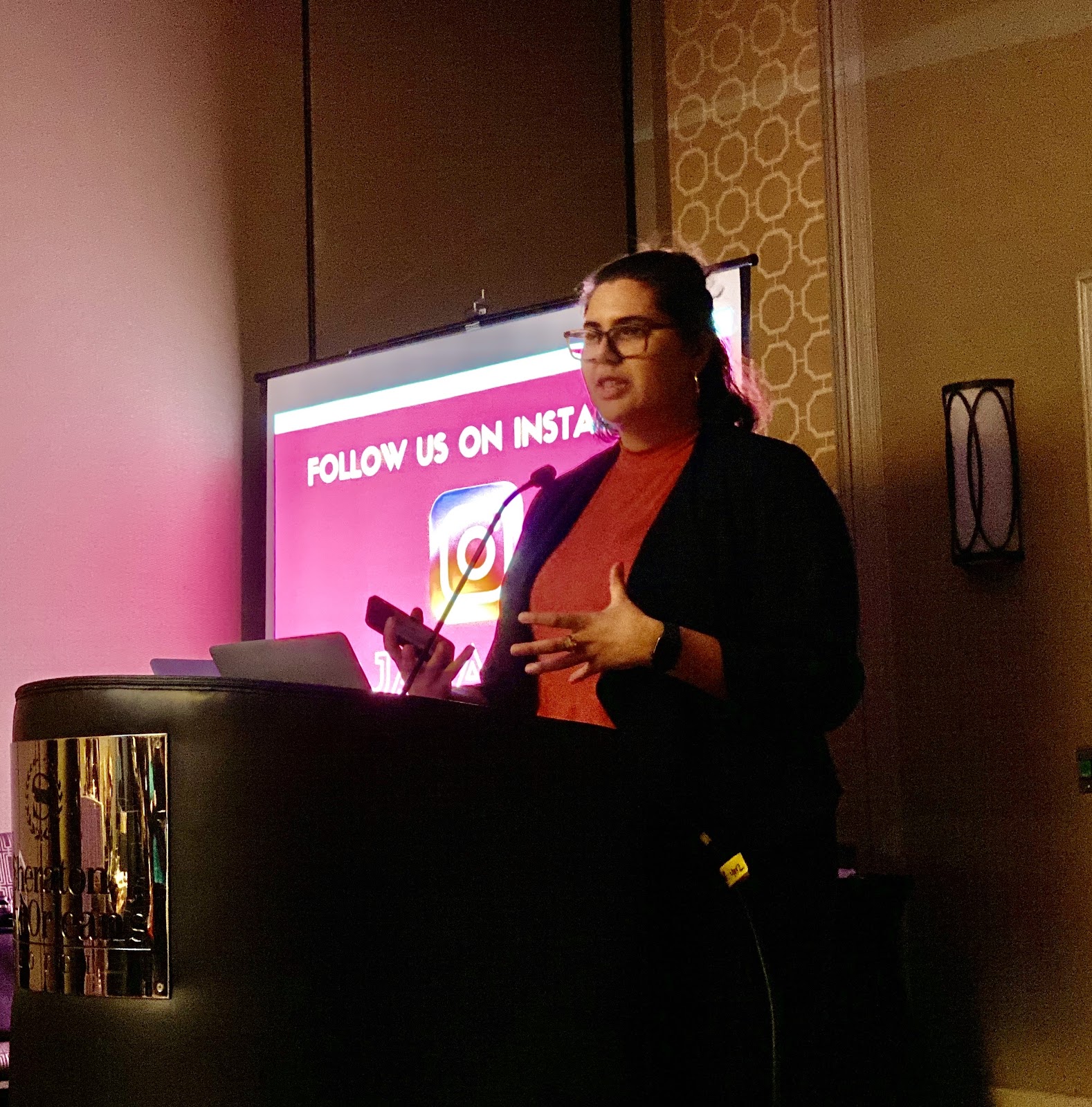 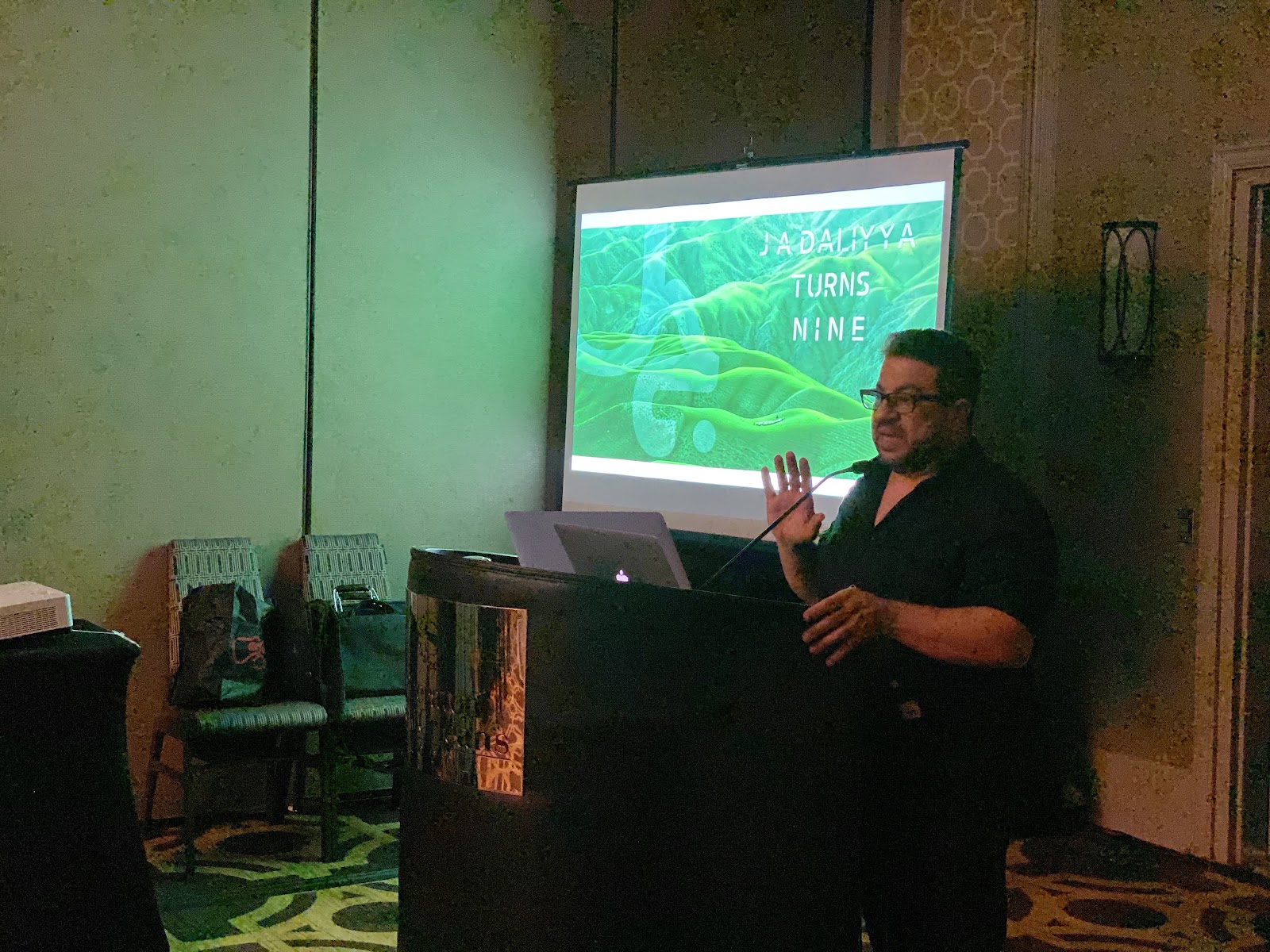 MESPI’s Coordinator and Associate Editor, Mekarem Eljamal, informed the audience of the project’s inaugural conference for its founding Board and Team, which was held in June 2019, where a number of its projects were launched. Eljamal highlighted the development of MESPI’s  Secondary Education Module. MESPI’s founding Editor, Bassam Haddad then addressed the development of MESPI’s Teaching Modules on salient topics and on particular countries that receive short shrift, both of which will become available gradually starting in 2020. 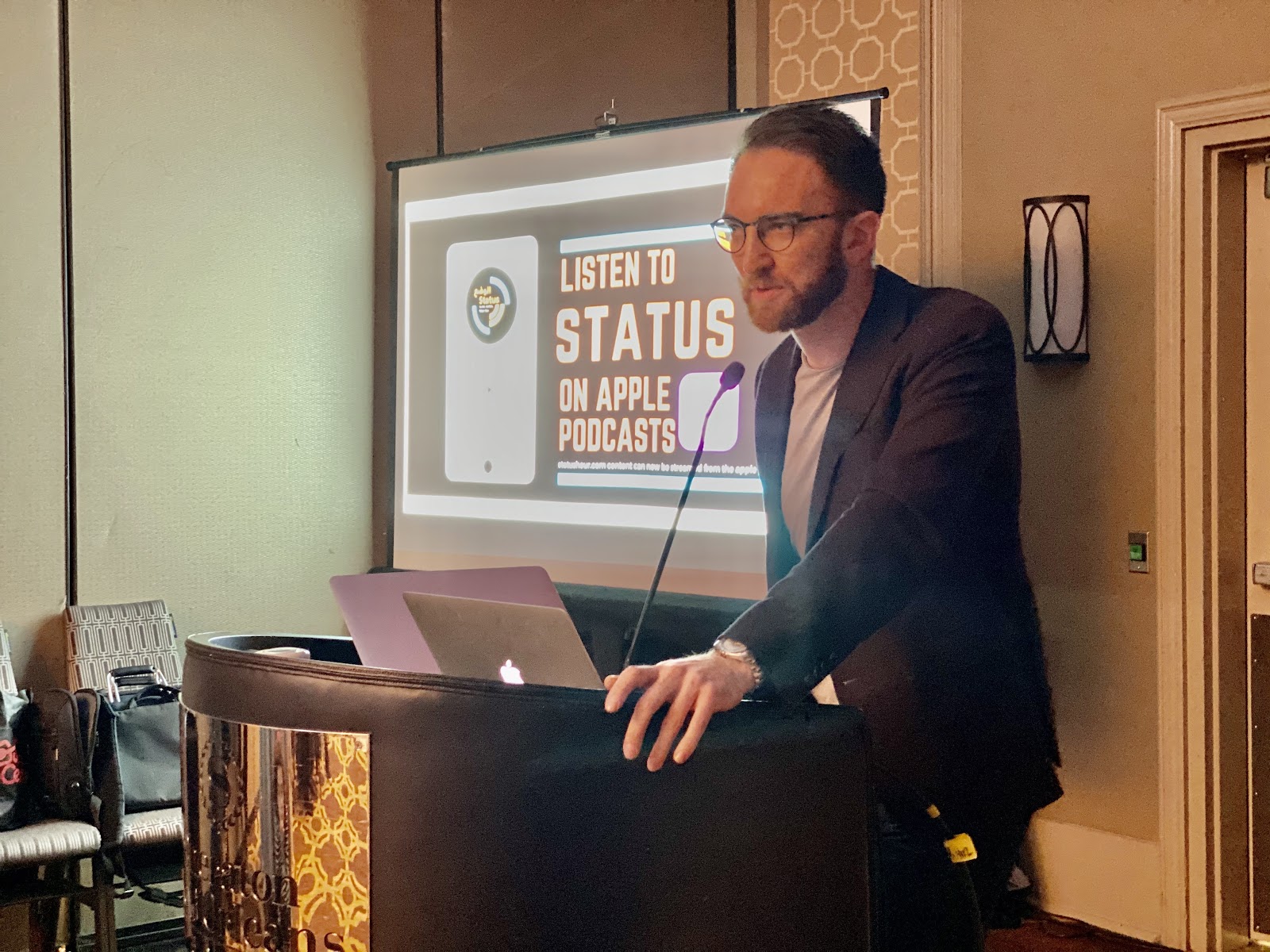 Jonathan Adler, Managing Editor of Tadween Publishing, then announced the publication of the JadMag Spring 2019 Issue. Adler also unveiled plans to produce a thematic JadMag centered around pedagogy. He also addressed the publication of the third Syria QuarterlyReport, which chronicles important developments in Syria on a weekly basis and curates significant writing/articles on Syria from across the globe, in Arabic and in English. Jadaliyya’s Nadya Sbaiti and Abdullah al Arian presented a synopsis of “The Nerdiest Show on the Internet.” The two also introduced Status Issue 6.2, which features content relevant to Jadaliyya’s new  Iran page, as well as a large number of interviews, lectures, panels, and videos that address current developments in the region. 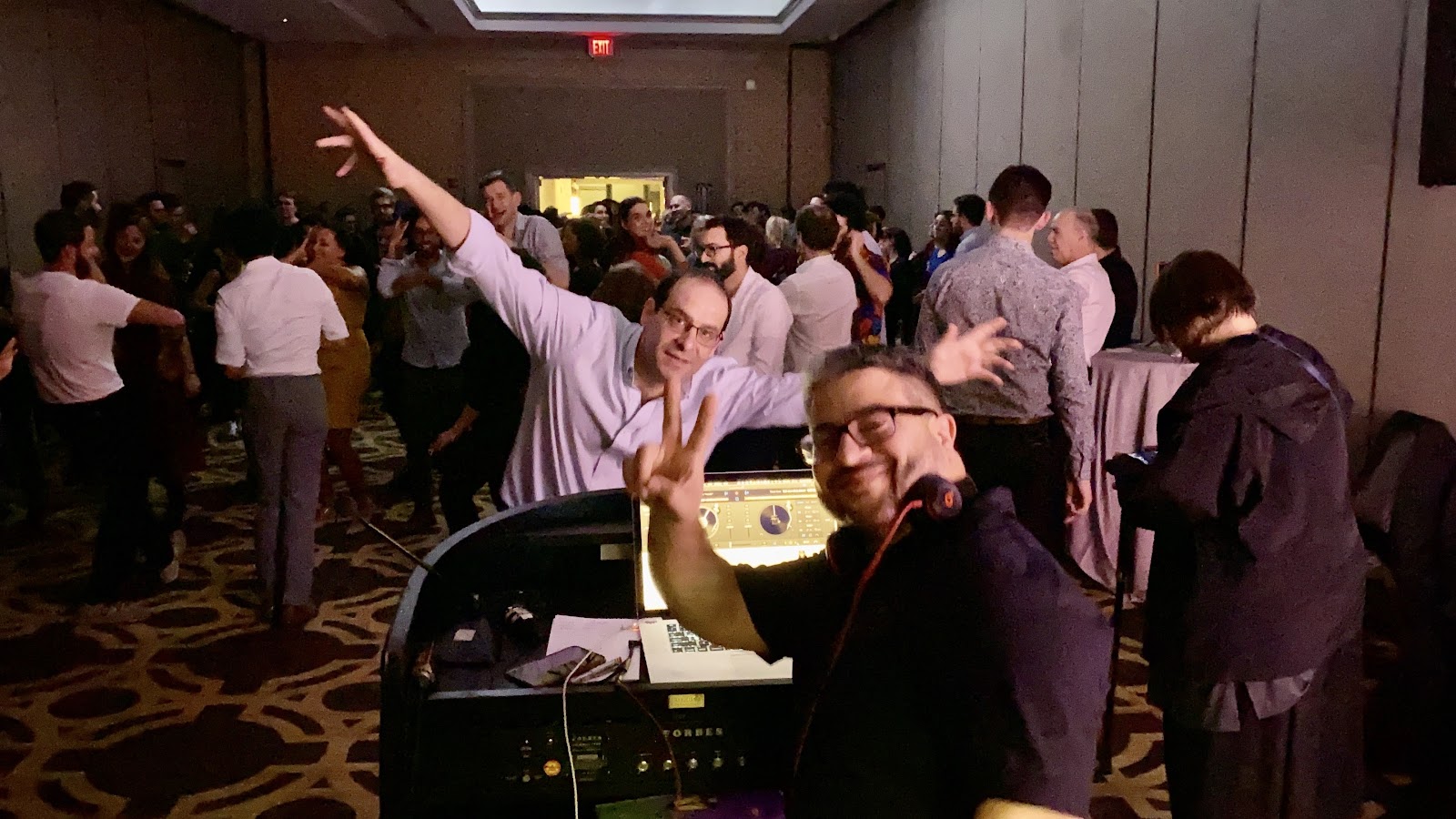 While the official MESA dance party was canceled, Executive Director of ASI Bassam Haddad, DJ’d a Rogue Stealth Dance Party. ASI and MESA attendees danced the night away to the tune of global beats and revolutionary chants. ASI team members continued a tradition of heavy involvement in the many panels, roundtables, and conversations featured at MESA this year. Thirteen of this years’ sessions featured contributions by ASI team members. The sessions provided a fantastic opportunity for members of ASI’s community to learn about and engage with one another's research.

This session above was held around Jadaliyya’s Syria Page Co-Editor Lisa Wedeen’s book, Authoritarian Apprehensions (University of Chicago Press, 2019), where another Co-Editor of that page, Bassam Haddad was among the six scholars who discussed the book.

Race in the Middle East

Women in Lebanon: From Late Colonialism to Early Independence

The Question of Palestine in American and Ethnic Studies

The Neoliberalization of the University

After the Colonial Turn: Middle East Studies and Challenges of Theory

Our participation at MESA would not be possible without the support of our Jadaliyya readership. We look forward to continuing to develop the Arab Studies Institute in order to best suit the needs and interests of readers like you.