Issue 6.2 of Status / الوضع ushers in the Fall season with a brand new look and a celebration of the Jadaliyya Iran page. 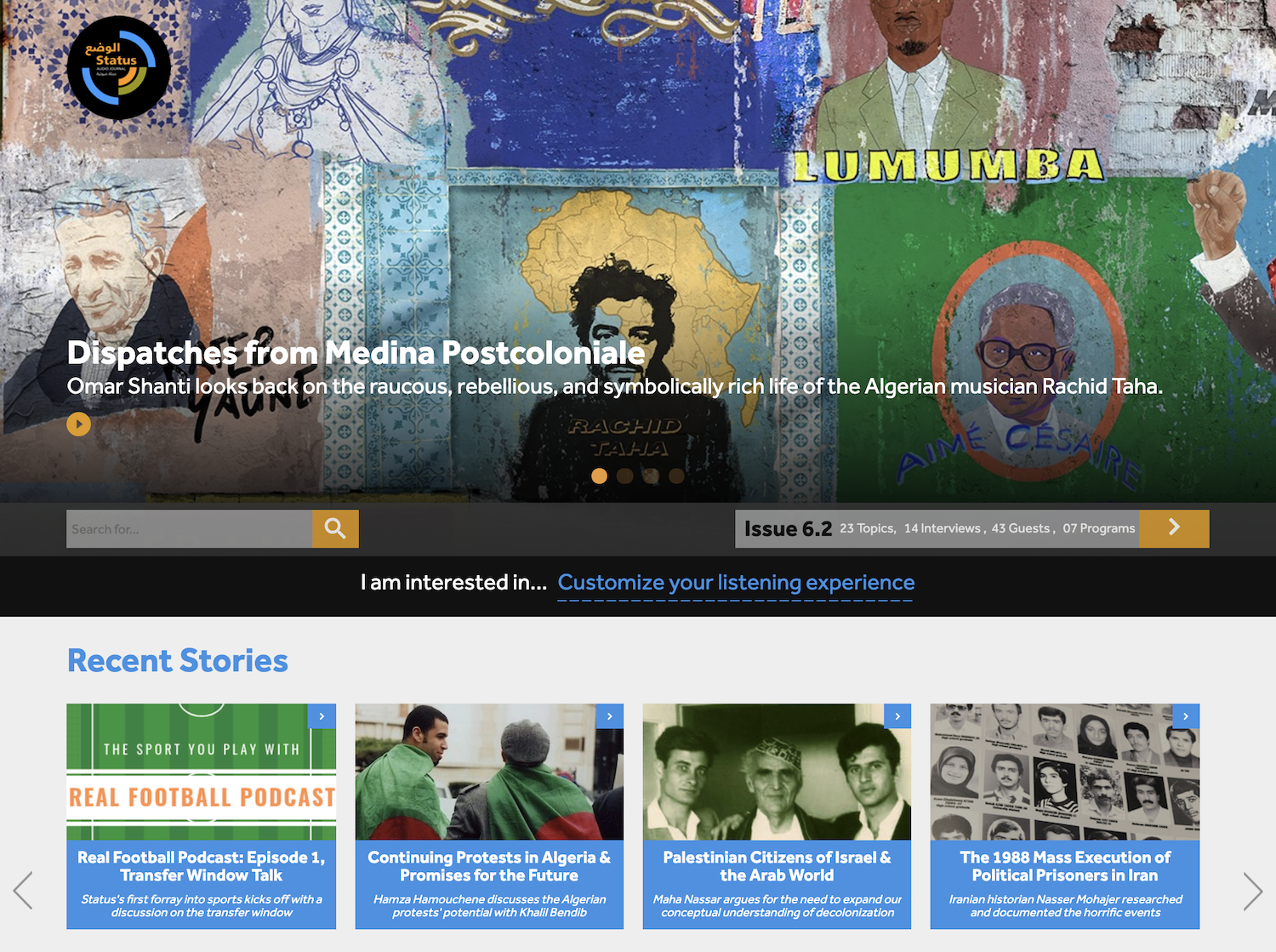 This issue of Status/الوضع marks the fifth anniversary of this project which started in Fall 2014. We are delighted to share with you the usual bouquet of diverse interviews, programs, conversations and lectures, covering a variety of topics, events, and countries, including the launch of new programs. In our introduction to the previous issue of Status/الوضع, we dwelled on our journey in multiple ways, so we will spare you the details and get right to the content. Take note of our new website storefront, which now features a dynamic carousel and a host of podcasts that we are now publishing intermittently between issues, to keep your ears busy. Email us at info@statushour.com or visit us here should you have any comments or contributions.

In this edition, to celebrate the launch of Jadaliyya's new Iran Page, we feature a discussion between Arash Davari and Sina Rahmani on their article, “Divorce, Iran-America Style.” The evolution of the relationship between Iran and the United States, recent tensions, and why Iran occupies a unique position in the mindset of American politics are some key topics in this piece.

Also on Iran are two special contributions courtesy of Voices of the Middle East and North Africa (VOMENA) on the impact of Iranian sanctions and the 1988 massacre. VOMENA’s contributions also include timely discussions on the conflict in Yemen and the ongoing protests in Algeria.

Moving to Algeria’s neighbors, we are excited to present submissions on Tunisia’s upcoming elections with Mohamed-Dhia Hammami and on the recent events in Libya regarding the battle for Tripoli with Ali Ahmida. 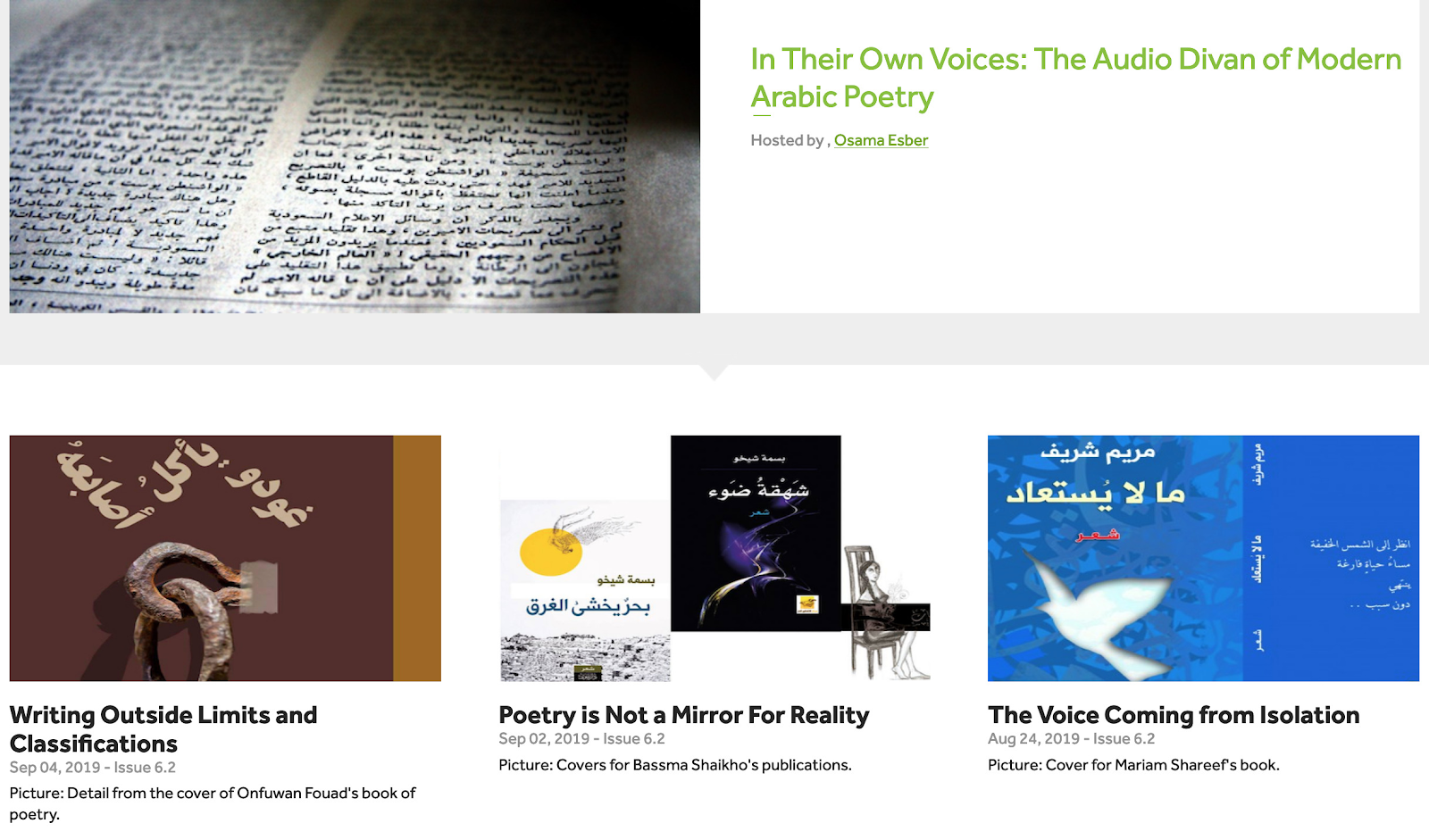 Dearly missed from last issue, Osama Esber’s fantastic In Their Own Voices program is a welcome addition including discussions with Syrian poet Bassma Shaikho, Palestinian poet Mariam Shareef, and Algerian poet Onfuwan Fouad about the themes that weave throughout their work.

Focusing on an intriguing intersection between film production and the Syrian economy in wartime, Mira Nabulsi’s interview with Christa Salamandra on how writers and directors navigate their art through an unstable political and physical landscape is thought-provoking, engaging, and a sorely needed analysis of film and television in war. 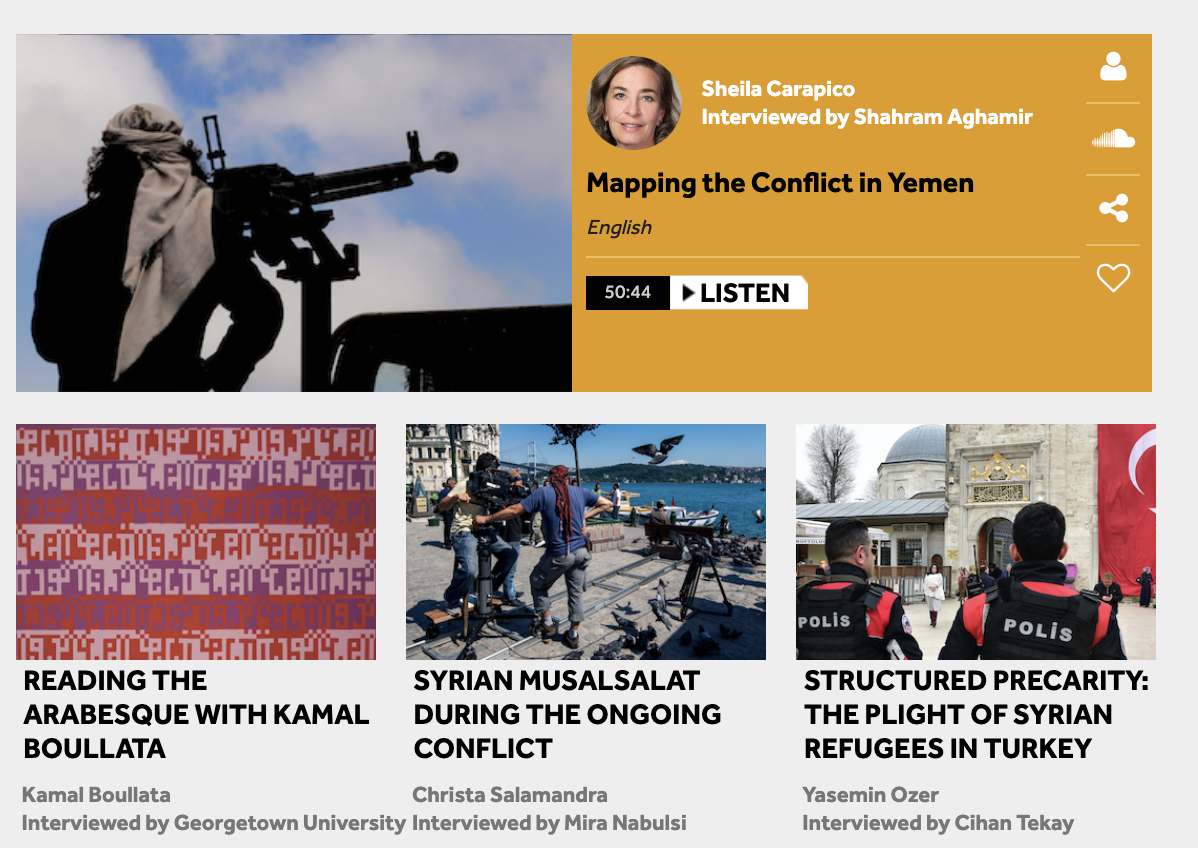 “Dispatches from Medina Coloniale,” a profile piece which includes a never-before-published interview with Algerian musician and activist Rachid Taha, is also not to be missed.

Particularly timely is Cihan Tekay’s contribution. Focusing on the shifting Turkish policy towards Syrian refugees, and how the ICE-style deportations have affected Syrians living in major cities, "Structured Precarity: The Plight of Syrian Refugees in Turkey" with Yasemin Ozer helps elucidate transnational dynamics of refugee repression, mistreatment, and deportation.

Also discussing transnational dynamics, Noura Erakat sat down with long-time aboriginal activist and scholar Gary Foley to discuss the histories of the Black Power movement in Australia and the current efforts to strengthen Aboriginal-Palestinian solidarities through a convergence later this Fall.

In addition to all of these fantastic interviews, Issue 6.2 is also featuring a large amount of new videos, with panels, workshops, and interviews.

A brand new episode of The Nerdiest Show on the Internet brings ten chapters on the relationship between the United States, Europe, and the Middle East. This time with Abdullah al-Arian and Bassam Haddad in the studio, Nadya Sbaiti joins via video call from Lebanon to talk pedagogy and their thoughts on the books.

Touching on Algeria but dealing with a broad number of topics across the region, including French discourse on US-Iran relations, the Boycott, Divest, and Sanction movement, French colonialism, and the rise of the neoliberal president Emmanuel Macron, our interview with the esteemed Alain Gresh on France’s role in the Middle East and North Africa is an exciting addition to this issue.

Also on Algeria, we have a video interview with Muriam Haleh-Davis and Thomas Serres, co-editors of Jadaliyya’s Maghreb page. Detailing the role of the timing of demonstrations, the politics of language, and the particularity of Algerian satire, this interview is not one to pass up. We are excited to have new Arabic language videos, including three new panels from the Asfari Institute for Civil Society and Citizenship at the American University of Beirut and the Middle East and Islamic Studies Program at George Mason University’s Active Voices program.

Finally, and a new topic for Status/الوضع, we have a great symposium on Middle Eastern cuisine that includes perspectives from historians, anthropologists, and literature experts.

Keep your ears and eyes peeled for an anniversary issue in December 2019, when we celebrate our five year anniversary with an extra issue!

We hope you enjoy,