From Uprising to Blast & Aftermath

This is the sixth signature event of the
Ten Years On: Mass Protests and Uprisings in the Arab World Project

Organized by the Middle East and Islamic Studies Program at GMU, Arab Studies Institute, and the Asfari Institute at AUB

Today, Lebanon features one of the most severe economic crises in its history. Combined with the coronavirus pandemic and deepening political gridlock, the residents of the country are experiencing acute economic dislocation, political alienation, and daily hazards to their lives and wellbeing. The October 17 Revolution and August 4 Beirut Port explosion simultaneously—albeit different—reflected and added to the underlying features producing such crises. In a signature event of the Ten Years On Project, this panel explores how the Lebanese media are dealing with this turmoil, shedding light on the framing of events based on political agendas.

Ayman Mhanna is the Executive Director of the Beirut-based Samir Kassir Foundation, the leading freedom of expression and media development NGO in the Levant region. He joined SKF in September 2011. In this capacity, Ayman oversees the Foundation’s monitoring of violations targeting media and culture professionals, advocacy for more liberal legislation, research into the future of the media sector, and training activities to build the capacity of emerging, independent media initiatives. From January 2016 to February 2017, he was also the Executive Director of the Global Forum for Media Development (GFMD), a network of 200+ media development and journalism assistance organizations. He previously served as Senior Program Officer for the National Democratic Institute for International Affairs (2007-2011) working on election observation, electoral reform and civil society involvement in public policymaking. Ayman holds a bachelor’s degree in Economics from Saint Joseph University in Beirut and a master’s degree in International Affairs from Sciences Po Paris. He is a member of Friends of Europe’s European Young Leaders program – MENA chapter (class of 2017) and a member of the international Contact Group on Content and Jurisdiction at the Internet Jurisdiction Policy Network for 2019-2022, and a visiting professor at the College of Europe, Natolin - Warsaw, teaching a course entitled “New challenges for media freedom."

Dima Issa is a Senior Lecturer of Mass Media and Communication at the University of Balamand in Lebanon. She holds a PhD from the University of Westminster in London, an MSc from the London School of Economics in Global Media and Communications and an MA from the University of Southern California in Global Communications. Her research has primarily focused on Arab diaspora and media consumption, looking at ways in which identity is constructed and reconstructed through space and time. In addition, her interests include gender and representation, popular culture and audience studies, new media and technologies and social networking. Before academia, Dima worked in the corporate sector in media relations, publications and website management as well as in broadcast journalism.

George Eid is a Senior Broadcast Journalist and Executive News Producer. He is an international Multilingual (Arabic, English, French, German, Greek) correspondent, anchor and member of the intl. investigative reporters and editors organization. He holds a master’s degree in marketing media and management from Sorbonne IV in 2014. He was the head of News Operations at MTV Lebanon until November 2020 after having served as deputy editor in chief for 6 years. He was equally a senior correspondent for the channel. Eid is also a university lecturer at Notre Dame University, Saint Joseph University and ALAC leadership academy. His documentary “Kalimera Men Beirut” produced in 2016 has won several European awards. Furthermore, he is a coach and trainer/consultant in communication/media/personal branding and journalism with over 15 years of experience. George Eid is currently based in Dubai and works as a Senior Broadcast Journalist/ Executive News Producer at Al-Arabiya News Channel-Dubai.

Maria Bou Zeid (Moderator) is an Associate Professor and the Chairperson of the Media Studies Department at Notre Dame University-Louaize (NDU). She is also the Executive Director of the Arab Studies Institute (ASI) - Beirut Office. Dr. Bou Zeid holds a Doctorate in Media Studies from Université Paris II, Assas, Paris, France and a D.E.S. in Journalism from the Lebanese University in collaboration with the French Press Institute-IFP and the Center for the Formation and Perfecting of Journalists-CFPJ, Paris, France. Her research interests include: Media Ethics and Media Education. She is also engaged in research on higher education in the Arab world tackling issues such as the efforts of Internationalization in the field of Higher Education in the MENA region along with the challenges that the Lebanese Education sector is currently facing. Bou Zeid has also an extensive professional experience in the field of television production and broadcast journalism.

Adel Iskandar (Discussant) is an Assistant Professor of Global Communication at Simon Fraser University in Vancouver, Canada. He is the author, coauthor, and editor of several works including Egypt In Flux: Essays on an Unfinished Revolution (AUCP/OUP), Al-Jazeera: The Story of the Network that is Rattling Governments and Redefining Modern Journalism (Basic Books), Edward Said: A Legacy of Emancipation and Representation (University of California Press), and Mediating the Arab Uprisings (Tadween Publishing). Iskandar`s work deals with media, identity and politics and has lectured extensively on these topics at universities worldwide. His forthcoming publication is the coedited volume Media Evolution on the Eve of the Arab Spring (Palgrave Macmillan). Iskandar taught for several years at the Center for Contemporary Arab Studies and the Communication, Culture, and Technology program at Georgetown University in Washington, DC. He is a co-editor of Jadaliyya. 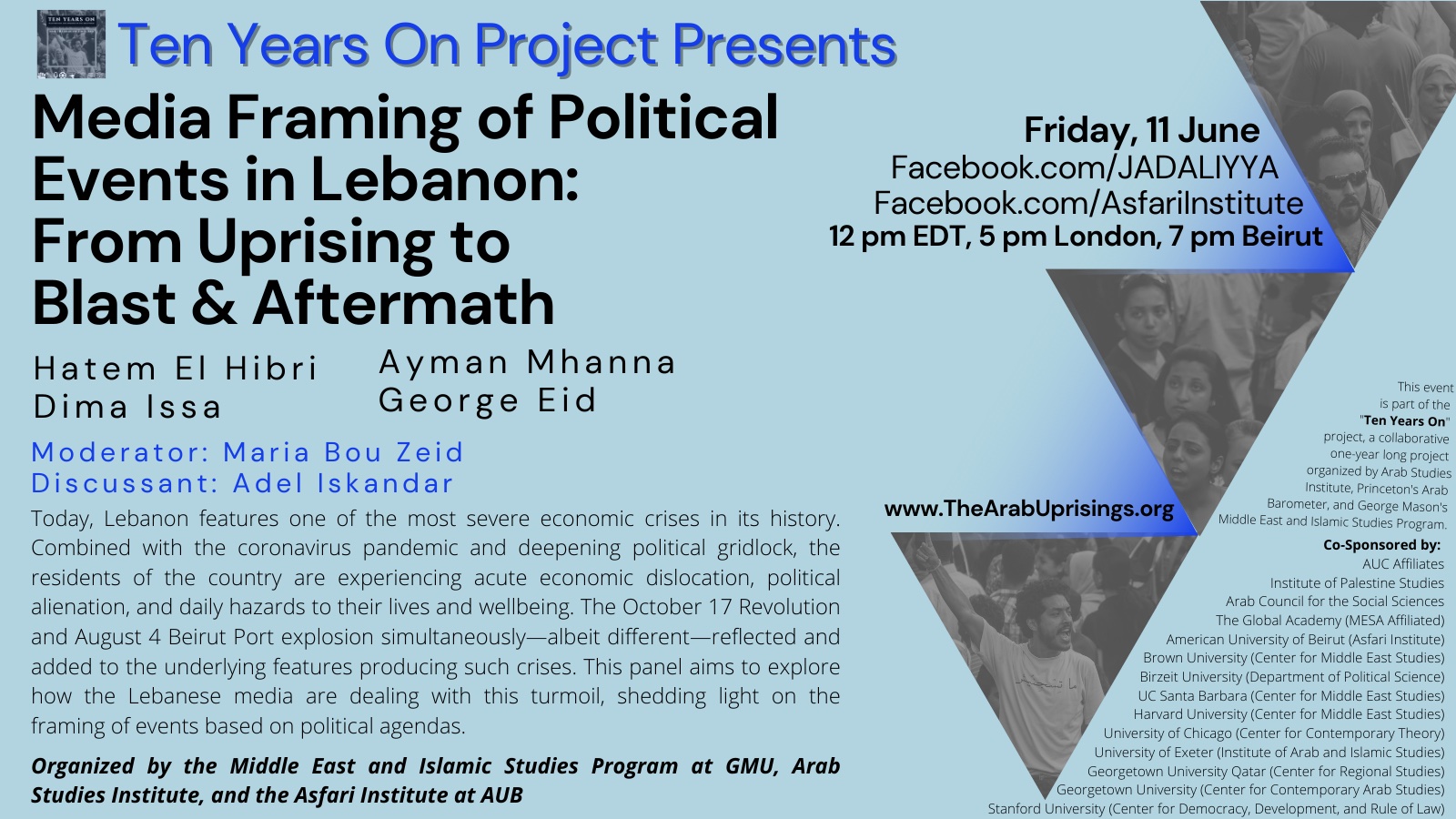