This month, LWA guest co-hosts Mohammad Abou-Ghazala and Cat Haseman discussed pedagogy, discrimination and harassment in academia, the brand-new podcast “Search Files,” a new panel in the Ten Years On Project, a roundtable on the developments in the Turkish Islamist sector, a new issue of Status/الوضع, and talked to close partners of ASI. 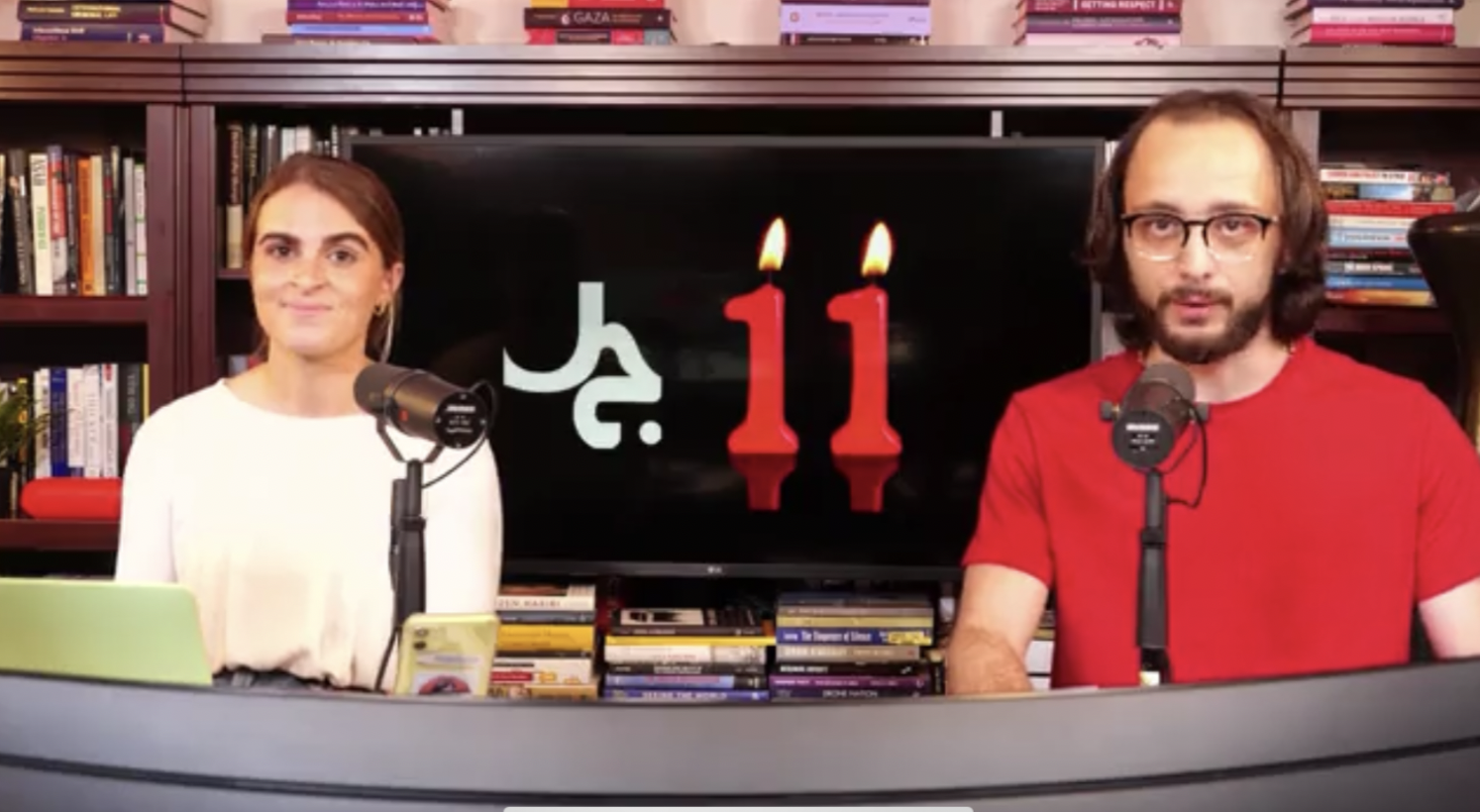 Mohammad and Cat tell the audience to look out for an upcoming 11th anniversary post on Jadaliyya.

It’s hard to believe that Jadaliyya just had it’s 11th birthday! Stay on the lookout for an 11th anniversary post on Jadaliyya that will highlight a year of knowledge production and celebrate the many activists, journalists, and scholars who have collaborated, created, and published scholarship over the past year. 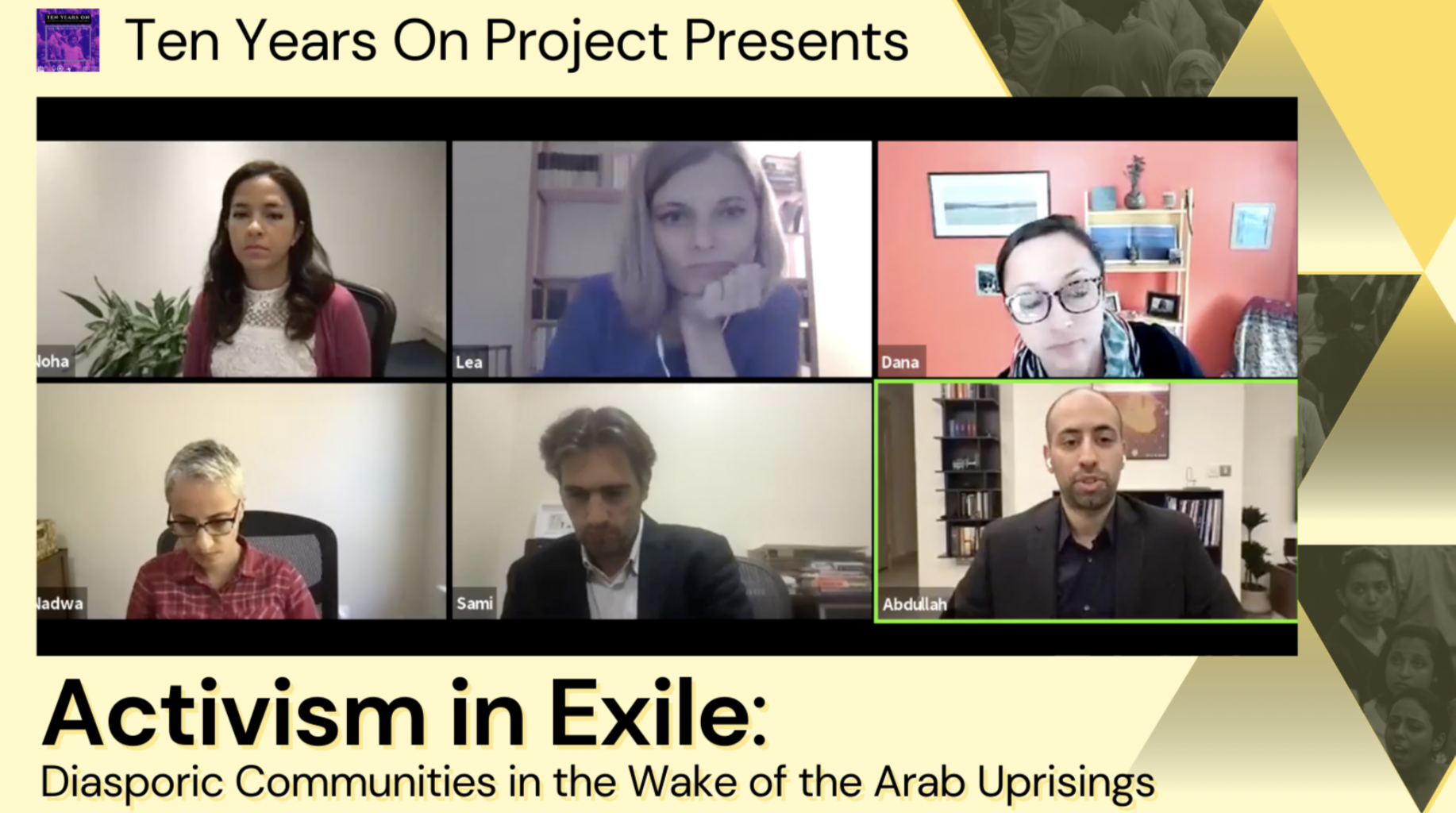 October marks the tenth month of the collaborative year-long project, Ten Years On: Mass Protests and Uprisings in the Arab World.

Last month, in partnership with the Center for International and Regional Studies (CIRS) at Georgetown University in Qatar, the Ten Years On project put on another signature panel, titled, “Activism in Exile: Diasporic Communities in the Wake of the Arab Uprisings,” where the participants discussed the complex challenges faced by communities trying to combat authoritarian regimes from abroad.

Co-moderated by Abdullah Al-Arian and Sami Hermez, this panel asked what is “new” about exiled communities recently formed in the aftermath of the Arab Uprisings ten years ago, especially in light of the historical legacies of political organization by diaspora communities since the latter half of the twentieth century.

Abdullah Al-Arian spoke with LWA Producer Mohammad Abou-Ghazala about the significance of diasporic communities in the aftermath of the Arab Uprisings over the past decade. 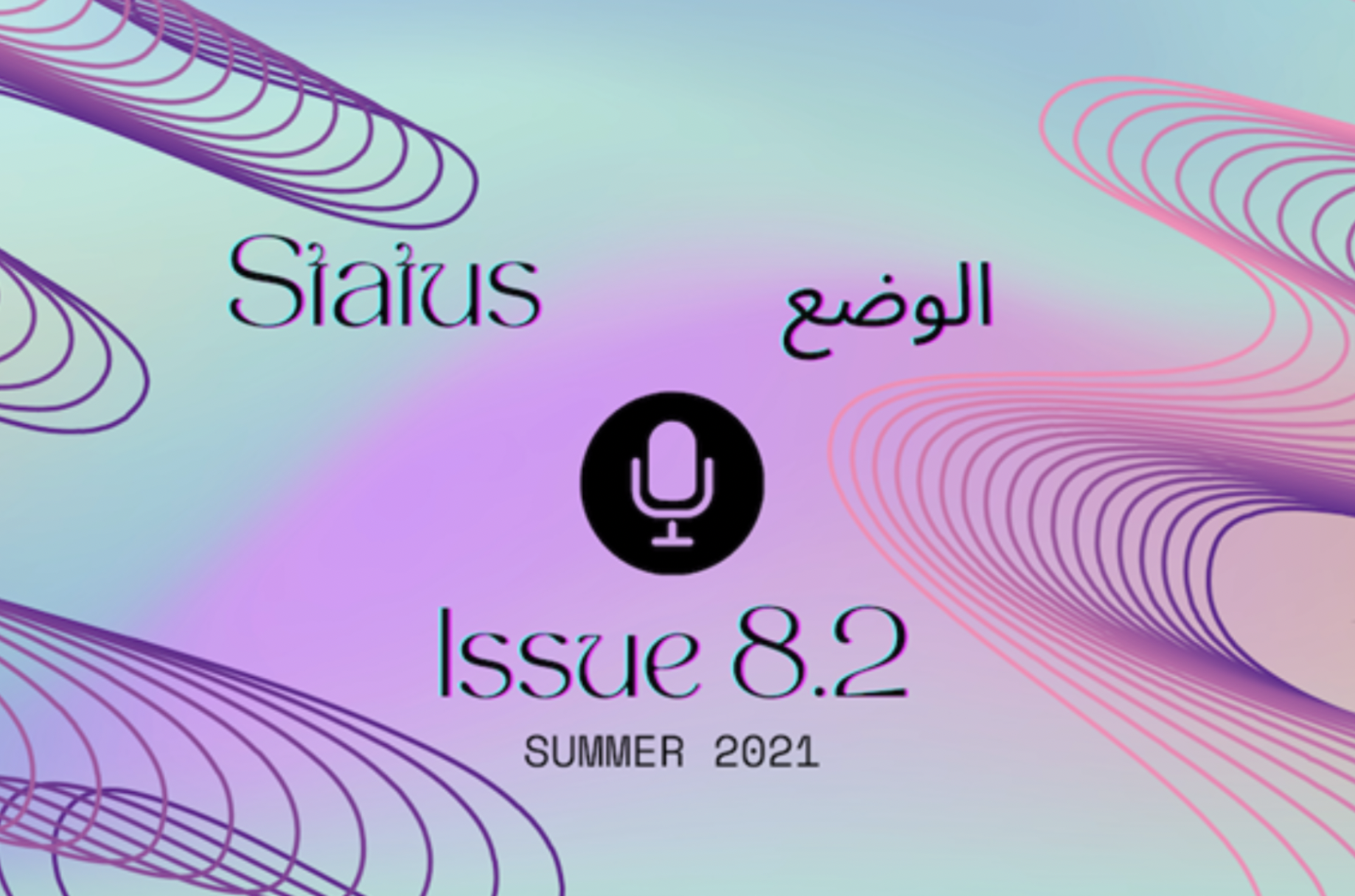 Since its inception, Status has been a landmark online audio platform dedicated to the politics, histories, societies, cultures, and arts in the Middle East and North Africa, offering listeners timely, sophisticated, informed, and stimulating reflections and analyses from those intimately familiar with sites of contention.

This edition of Status covers a wide variety of topics ranging from Palestine, the Ten Years On project, and protests in Iran’s Khuzestan.

Starling Carter, a new asset to the Status/الوضع team, joins live to talk about the future of the audio-visual platform.

This episode, the co-hosts dedicated some time to highlighting a couple of ASI’s close partnerships: Security in Context, and the Center for International and Regional Studies at Georgetown University in Qatar.

Security in Context is an interdisciplinary research and pedagogy initiative that promotes critical research and policy analysis around key questions related to peace and conflict, development, the politics of in/security and militarism. Most recently, Security in Context hosted a virtual panel discussion titled “Legacies and Aftermaths of the US "War On Terror.” 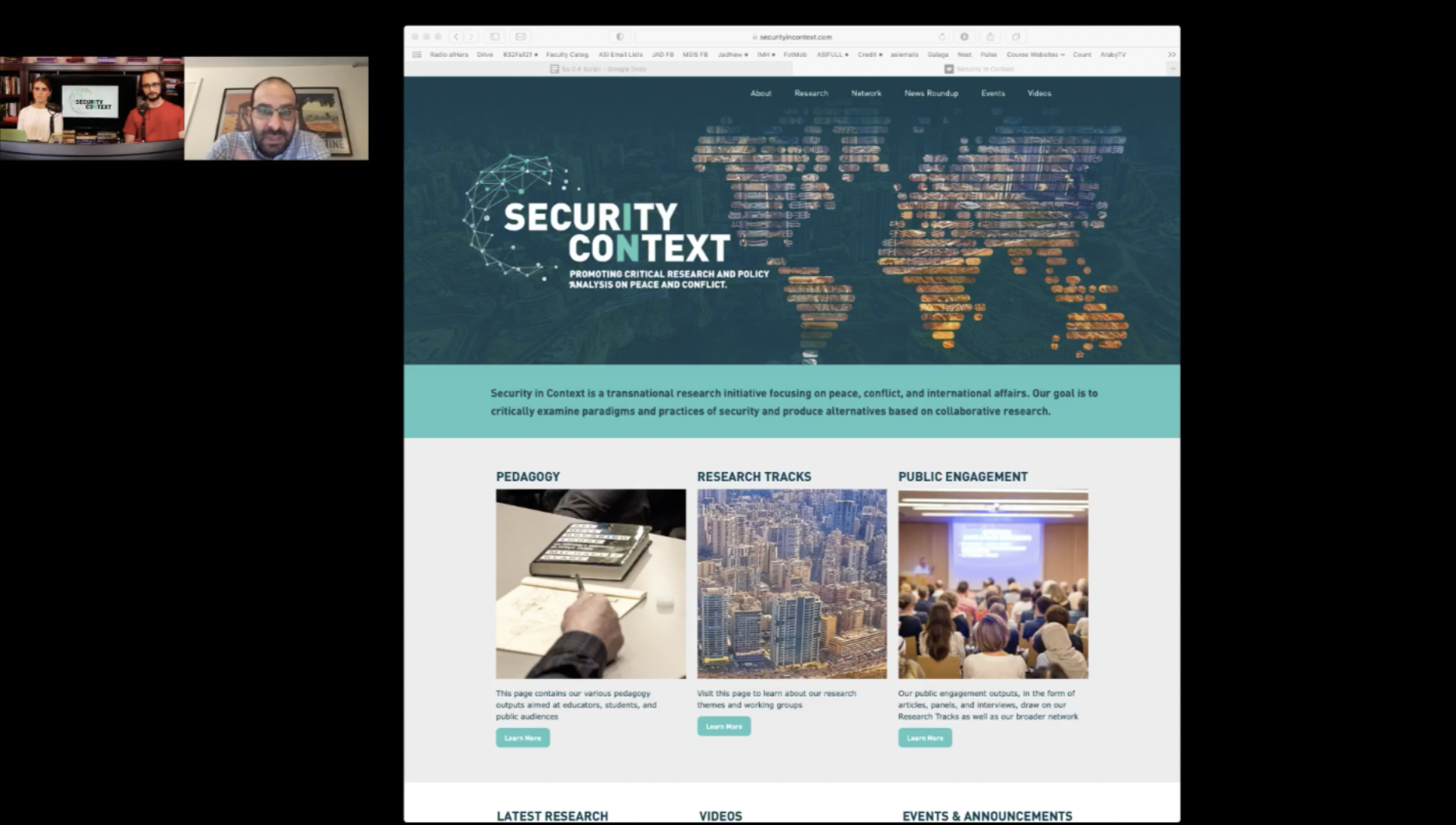 Also during the Partner’s Feature, Zahra Babar, who is Associate Director of Research at the Center for International and Regional Studies (CIRS) at Georgetown University in Qatar, joined the show to speak about the long history of collaboration and friendship between CIRS and ASI.

Zahra Babar speaks to the collaborations between CIRS at Georgetown University in Qatar and ASI.

A brand-new podcast, titled “Search Files,” covers trends in knowledge production and pedagogy on the Middle East and North Africa based on a constantly evolving dataset and pedagogic research, co-hosted by Bassam Haddad and Jessica Holland, who is Manager of Knowledge Production and Pedagogy at the Forum on Arab and Muslim Affairs.

Search Files Podcast will bring the teams of the Knowledge Production Project and the Middle East Studies Pedagogy Initiative to converse with experts in data visualization and the Middle East and North Africa, as well as educators and faculty from industry and academia.

In the first episode, recorded last month, the co-hosts spoke with founder of Pitch Interactive Wesley Grubbs, and assistant Professor of Films and Media Studies at George Mason University Hatim El-Hibri, regarding data visualization of academic knowledge production, and approaches to teaching films in the classroom.

Discrimination and Bullying in Academia (34:43) 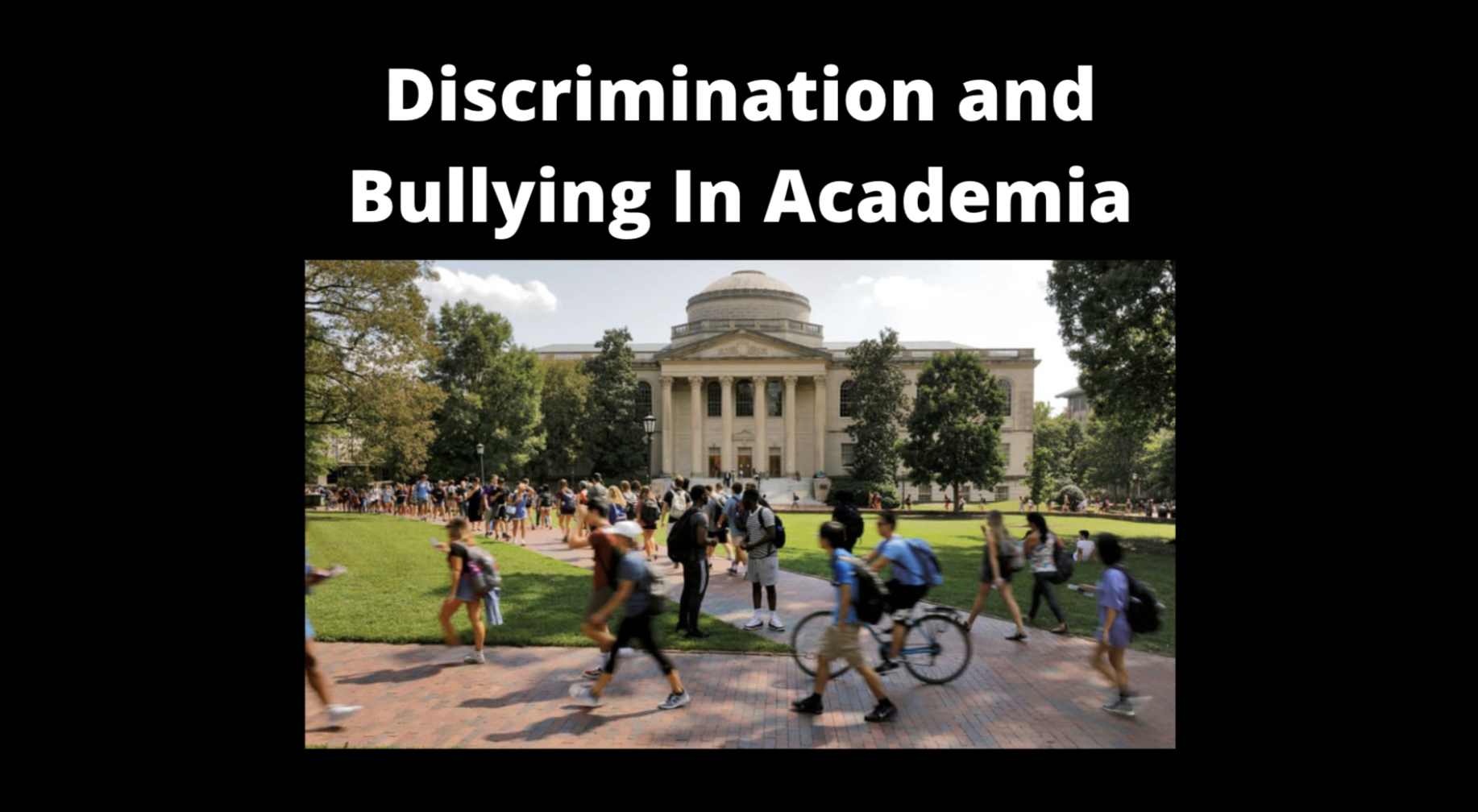 At the end of September, The Intercept published an article shedding light on the recent instance of attempted academic censorship by the Israeli government. Kylie Broderick, a UNC PhD student and the managing editor of Jadaliyya, has been targeted both by an Israeli diplomat and a US congresswoman, who accused Kylie of  antisemitism and claimed she is unfit to teach.

In what amounts to a grave violation of academic freedom, both a foreign diplomat and an American elected official attempted to pressure the university to prevent Kylie from teaching a seminar on the Israeli-Palestinian conflict. Kylie incisively defends herself stating, “States are not religions, nor are states a people.”

Jadaliyya’s Turkey Page organized another great roundtable titled, “Shifting Islamist Currents in Turkey,” which brought together an expert set of scholars to consider the ways in which the Islamist sector has been shifting over the two decades of AKP rule.

The participants grappled with this topic in a number of ways, looking at Islamism’s relationship to industrialization and development, the interaction of the Islamist sector and humanitarian NGOs, and the toxic intertwining of Islamism and ultra-nationalism in Turkey. As the editor’s write in their introduction, the team hopes that this roundtable might begin a conversation that other scholars will take up and continue. 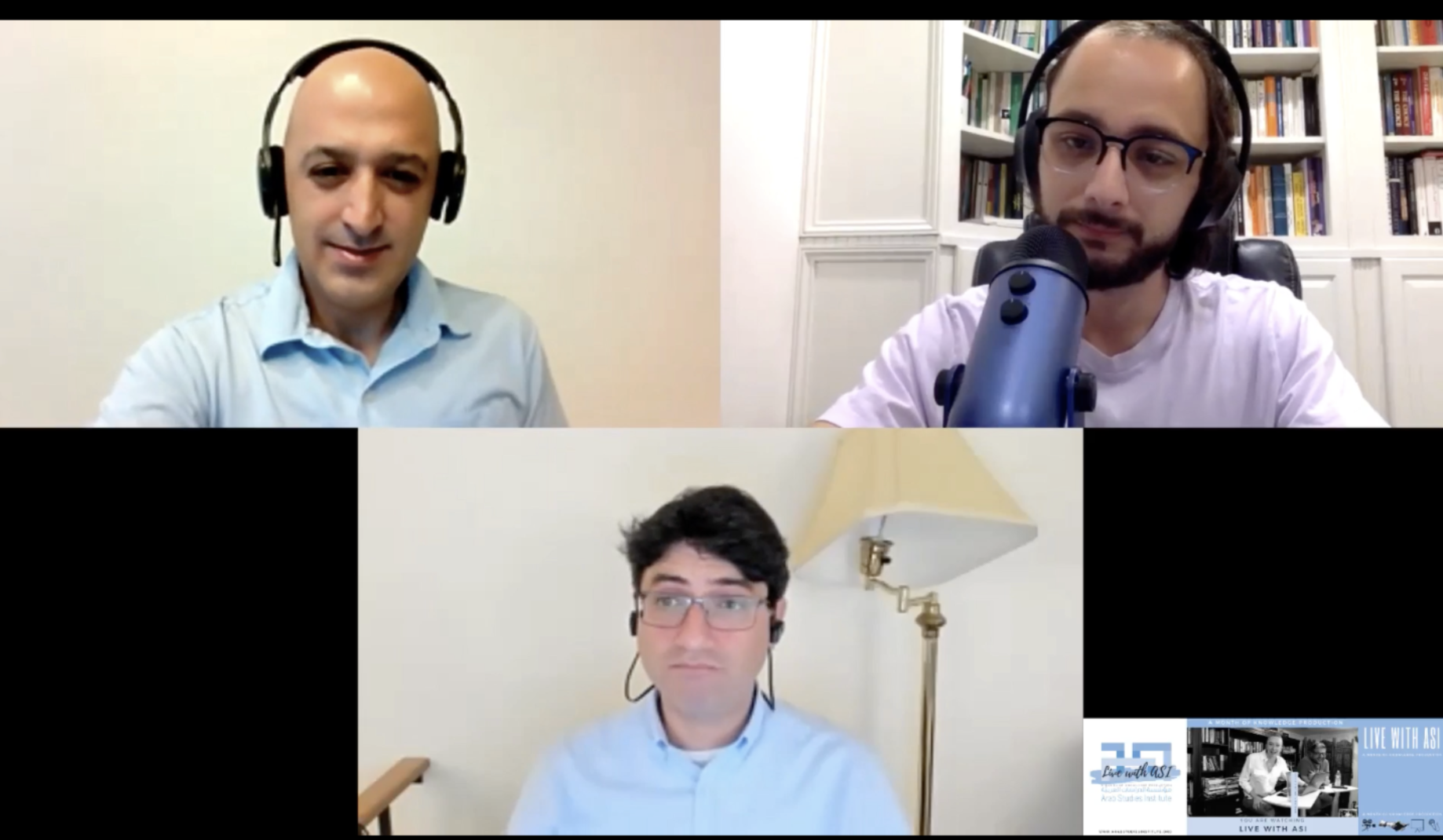 Utku Balaban and Nihat Celik speak with Mohammad about their contributions to the roundtable, “The Shifting Islamic Sector in Turkey.”

Can the Question of Palestine be Resolved? (45:52)

In his piece, “Can the Question of Palestine be Resolved,” Mouin Rabbani addresses the purported “insolubility” of the Palestinian issue, and challenges the assumptions that Israel’s occupation of Palestinian territories is irreversible. Instead, Rabbani draws comparisons to parallel struggles throughout the world, and examines the reality sponsored by those who stick to the Oslo Peace Process.

Jadaliyya Co-editor of the Quick Thoughts page, podcaster-extraordinaire, and dear friend of the broadcast, Mouin Rabbani joined the show to discuss his new, ever-pertinent article “Can the Question of Palestine be Resolved?”

The Middle East Studies Pedagogy Initiative (MESPI) published a bundle of three “Peer-Reviewed Article Reviews,” in which they present a collection of journals and their articles concerned with the Middle East and the Arab world. In collaboration with the Ten Years On Project, MESPI also released the first of three bouquets covering academic articles on various aspects of the Arab uprisings. This first bouquet features articles published from 2010 to 2020 dealing with cultural production in the context of the Arab uprisings.

PRAR research assistant John Ball gives viewers a sneak peak into the bouquet of articles related to cultural production during the Arab Uprisings.

Chihab El Khachab’s new book “ Making Film in Egypt: How Labor, Technology, and Mediation Shape the Industry.” The book is an ethnography of the everyday work of commercial film production in Cairo, based on fieldwork conducted between 2013 and 2015. And, it describes the industry’s intricate working patterns, its division of labor, its production process, its logistical and creative issues, and its imagined audiences.

Additionally, Nils Hägerdal’s “Friend or Foe: Militia Intelligence and Ethnic Violence in the Lebanese Civil War.” The book studies the role of ethnicity in civil war violence. The book

considers when militant organizations attack people based on their ethnic, sectarian, or religious identity rather than their individual traits, beliefs, or choice.

Bayan Abubakr wrote a piece titled “The Contradictions of Afro-Arab Solidarity(ies): The Aswan High Dam and the Erasure of the Global Black Experience.” The piece asks where Black communities indigenous to the Arabic-speaking world fit into the “geographies of liberation” that emerged through the making of an Afro-Arab political imaginary from the 1850s to the present day?

Another piece, titled "My Amazigh Indigeneity (the Bifurcated Roots of a Native Moroccan)" by Brahim el Guabli, probes the concept of reclaiming indigeneity through the experiences of a biracial Amazigh man. The piece describes the rehabilitative power of indigeneity, which allows  Imazighen to claim through the land a collective identity that state policies have suppressed in search of an imaginary national unity.