Diasporic Communities in the Wake of the Arab Uprisings

This is the seventh signature event of the
Ten Years On: Mass Protests and Uprisings in the Arab World Project 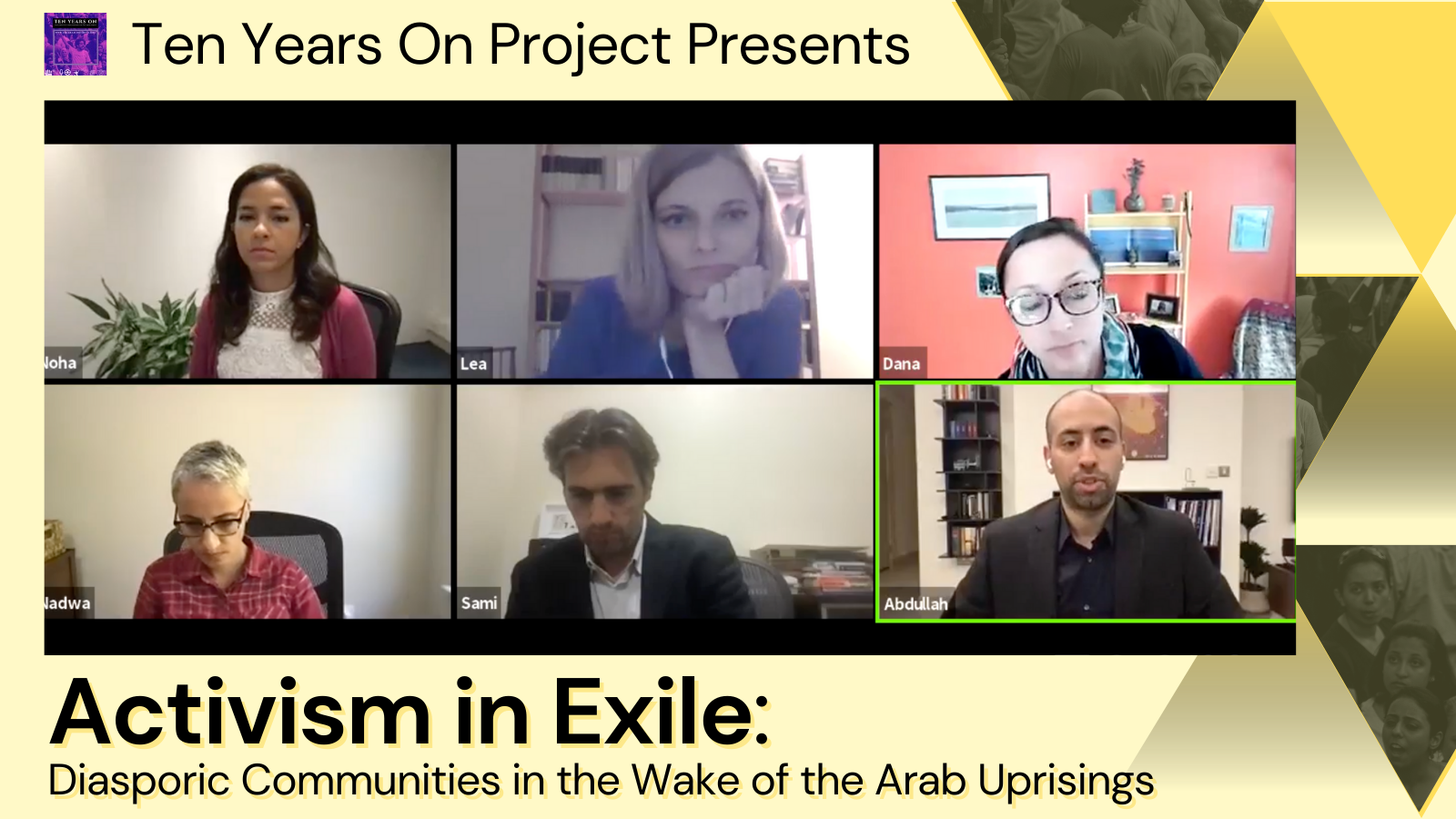 The Arab uprisings, which saw the mobilization of millions of citizens across the Middle East and North Africa, produced new exiled communities at a massive scale. Refugees made their way to countries all over the world, escaping economic pressures, political repression and state violence. In host countries, the new (and old) diasporic communities have often exercised what scholars define as “voice after exit.” Enabling conditions in the host state can allow for new forms of social and political mobilization and solidarity-building that are difficult to achieve under repressive regimes at home. But anti-regime diaspora activism after the onset of the 2011 Arab uprisings demonstrates that combating authoritarianism from afar is a challenging and complex phenomenon. Regimes have increasingly demonstrated a determination and capacity to repress diaspora activism through relying on their own formal and informal transnational networks of supporters. Middle Eastern diasporic communities are also far from homogenous, as their experiences, conditions, identities, agendas, interests and organizational forms may vary widely. Polarization among Middle Eastern diasporas is rife. Diasporas’ capacity to mobilize successfully and play an influential role is also highly dependent on the political and social conditions in their host state.

This panel of scholars, activists, and practitioners seeks to explore the demography of these recent diasporas, their forms of community organization, and modes of political mobilization. Among other things, this panel asks what is “new” about these recently formed exiled communities, especially in light of the historical legacies of political organization by diaspora communities since the latter half of the twentieth century. The panel also seeks to explore the role of the state in two contexts. How do local political and socioeconomic conditions in the host states as well as the changing contours of authoritarianism in the countries of origin impact the forms of mobilization that these communities have pursued in recent years? Other themes explored in this discussion include changing notions of political agency and citizenship rights, the role of transnational networks and civil society organizations, the impact of digital communication technologies, transformations in youth culture among exiled communities, and identifying new ideological and intellectual trends within diaspora communities.

Noha Aboueldahab is a nonresident fellow in the Foreign Policy program at Brookings and a fellow at the Brookings Doha Center. She is an award-winning specialist in transitional justice and the author of Transitional Justice and the Prosecution of Political Leaders in the Arab Region: A comparative study of Egypt, Libya, Tunisia and Yemen (Hart, 2017). Her most recent Brookings piece discusses how Western policymakers can engage the new Arab diasporas. Her forthcoming book examines the role of the new Arab diasporas in transitional justice and accountability. Aboueldahab is Co-Chair of the Transitional Justice and Rule of Law Interest Group at the American Society of International Law.

Dana Moss is an Assistant Professor in the Department of Sociology at the University of Notre Dame. She received her PhD in Sociology from the University of California, Irvine. Her research and teaching focus on collective resistance against repression, authoritarianism, revolutions; transnational activism, diasporas, immigrants; and the Middle Eastern region. Her current book project, The Arab Spring Abroad, investigates how and to what extent anti-regime diaspora activists in the US and Great Britain mobilized to support the 2011 uprisings in Libya, Syria, and Yemen. Her next book project will examine how and why members of military institutions resist participating in state- sanctioned violence. To date, her work has been published in venues such as the American Sociological Review, Social Forces, Social Problems, Mobilization: An International Journal, and Comparative Migration Studies. She comes to the University of Notre Dame from the University of Pittsburgh (2016-20), where she was awarded the 2020 David and Tina Bellet Excellence in Teaching Award.

Lea Muller-Funk is a Research Fellow at the German Institute of Global and Area Studies, where her research focuses on migration aspirations and drivers in (forced) migration, migration governance, and diaspora politics with a geographical focus on the Middle East, North Africa and Europe. Previously, she was a Marie Skłodowska-Curie Individual Research Fellow at the Department of Sociology at the University of Amsterdam and a postdoctoral fellow at the Department of Politics and International Relations at the University of Oxford. Muller-Funk earned a joint PhD in Comparative Politics and Arabic Studies (summa cum laude) from the Centre des Recherches Internationales (CERI) at Sciences Po Paris and the Department for Near Eastern Studies at Vienna University in 2016.

Abdullah Al-Arian (Moderator) is an associate professor of History at Georgetown University in Qatar. He received his doctorate in History from Georgetown University and his master’s degree in Sociology of Religion from the London School of Economics and his BA in Political Science from Duke University. He is editor of the "Critical Currents in Islam" page on the Jadaliyya e-zine. He is also a frequent contributor to the Al-Jazeera English network and website. His first book, entitled Answering the Call: Popular Islamic Activism in Sadat's Egypt was published by Oxford University Press in 2014. Professor Al-Arian teaches introductory courses on the history of the Middle East, as well as advanced topics courses covering the history of modern Egypt, Islamic social movements, and the history of US policy towards the Middle East.

Sami Hermez (Moderator) is the director of the Liberal Arts Program and associate professor in residence of anthropology at Northwestern University in Qatar. His research focuses on the everyday life of political violence in Lebanon, and his broader concerns include the study of social movements, the state, memory, security, and human rights in the Arab World. Hermez has held posts as visiting scholar in the Department of Anthropology at Harvard University, visiting professor of Contemporary International Issues at the University of Pittsburgh, visiting professor of anthropology at Mt. Holyoke College, and postdoctoral fellow at the Centre for Lebanese Studies, St. Antony’s College, Oxford University. His professional experience includes work with the United Nations Capital Development Fund and World Bank in New York and Sana’a, Yemen, as well as a stint with the UN Development Program in Beirut. At NU-Q he teaches classes in anthropology that include topics such as violence, gender and anthropology in the Middle East. He obtained his doctorate degree from the Department of Anthropology at Princeton University.