This month, co-hosts MK Smith and Bassam Haddad discussed impressions in the World Cup in Qatar and the recent COP27 conference in Sharm el-Sheikh, Egypt.

They also highlighted a new podcast with episodes on the uprising in Iran and Alaa Abdelfattah’s imprisonment in Egypt, new episodes of the Connections Podcast and Transnational Times Podcast, debriefed the MESA 2022 conference, discussed the new Arab Studies Journal Fall 2022 Issue, in addition to new texts out now, pedagogy, and must-read recommendations. 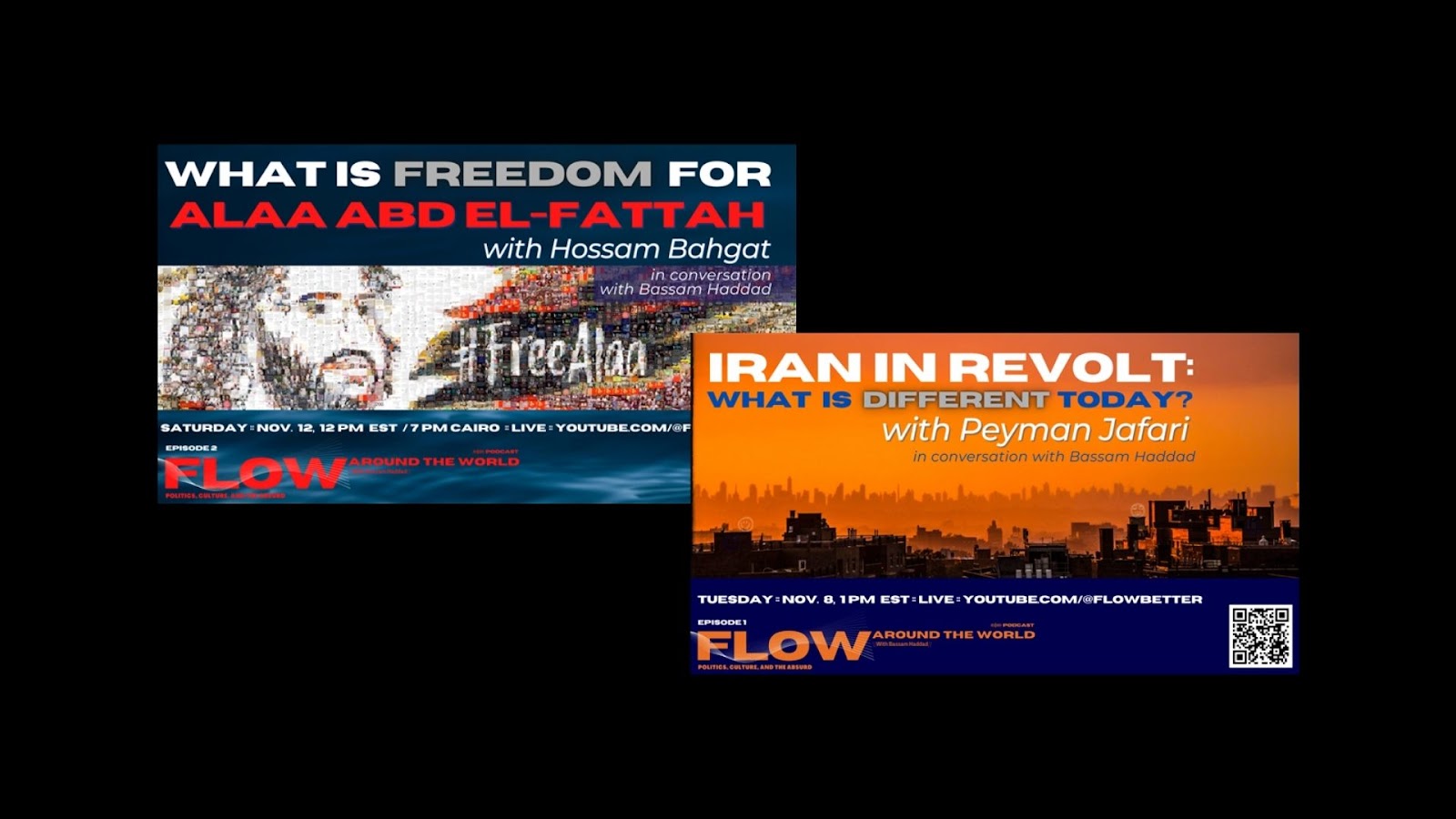 Last month, Bassam debuted a new podcast, titled “Flow,” which aims to defy Youtube's algorithm by not focusing on just one thing to the exclusion of others. The show provides stimulating conversations about our world, with focus on the Middle East and the United States, including a variety of topics related to politics, culture, art, technology, wellness, and film.

In one episode, Bassam interviewed human rights defender and journalist Hossam Bahgat on the politics of Alaa Abdelfattah’s imprisonment in Egypt, the global attention which the campaign to free Alaa has received.

In another episode, Bassam interviewed Peyman Jafari, who is Assistant Professor of History and International Relations at the College of William and Mary, on the protests in Iran. They discussed why these protests are different from previous years, how the state is reacting, what role international forces play, how they compare to Iran’s 1979 revolution and the Arab revolutions of 2011, and where they might be heading to.

Peyman Jafari discussed the progression in the Iranian state’s response to protests in recent weeks, and the implications of the Iranian team’s performance in the World Cup. 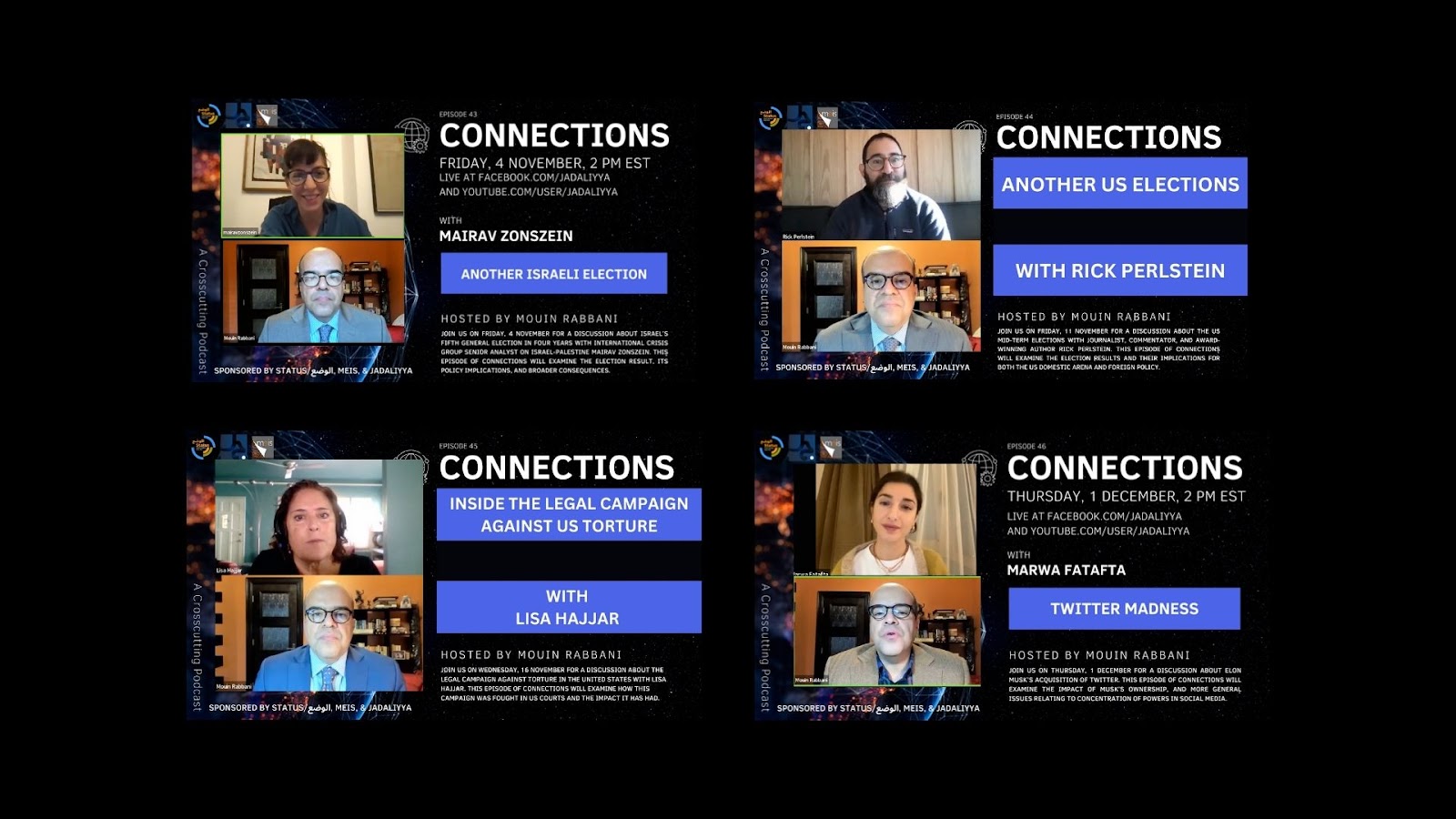 Mouin Rabbani was incredibly busy last month, putting out four new episodes of the Connections Podcast. For those that don’t know, Connections combines journalism, analysis, and scholarship to offer timely and informative interviews on current events and broader policy questions, as well as themes relevant to knowledge production.

Mouin Rabbani breaks down his recent interviews for Connections Podcast. 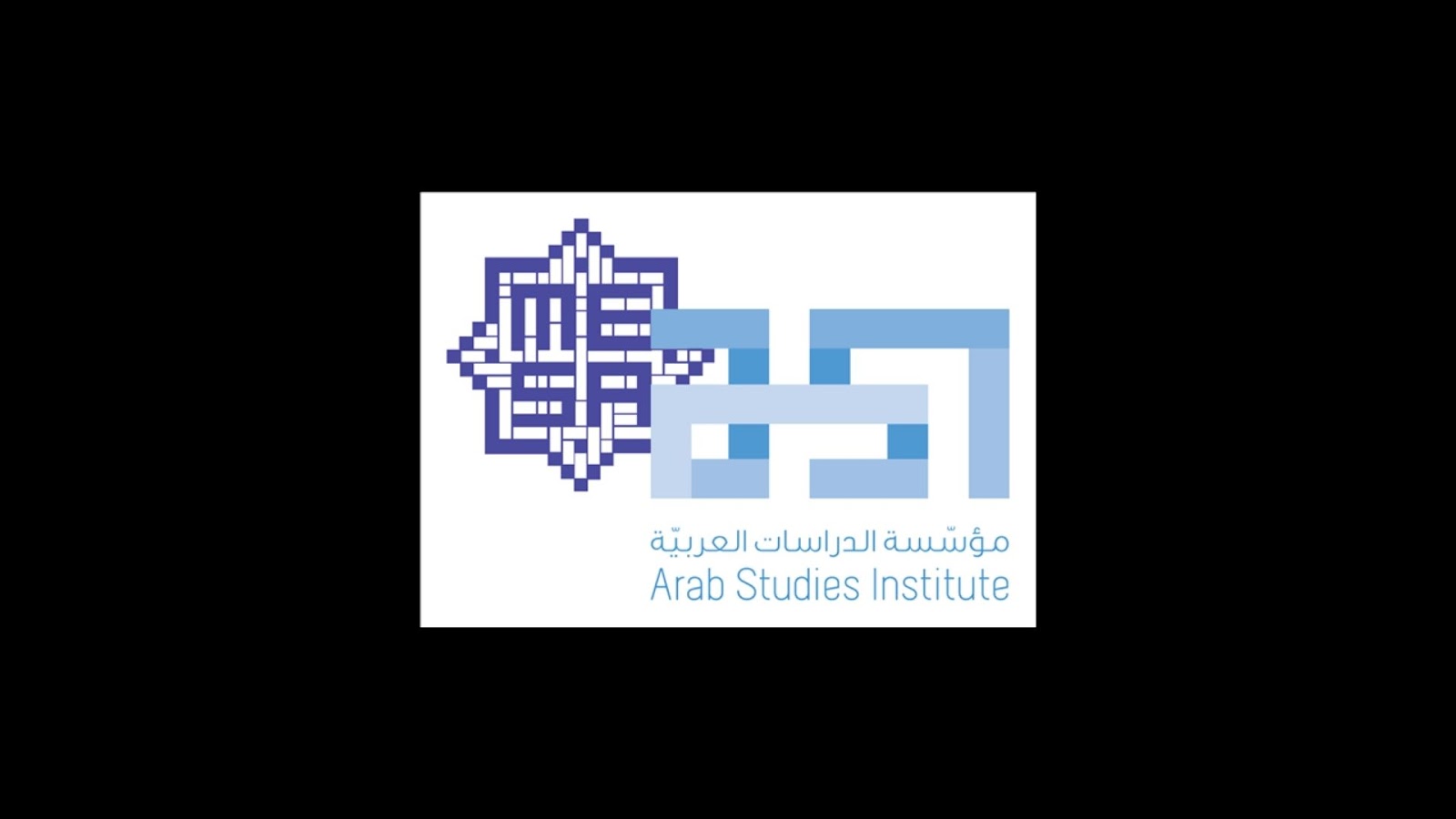 In the first weekend of December, we had the pleasure of attending the Middle East Studies Association’s 56th annual meeting in Denver. ASI had a strong showing at the conference, with our team members participating in eleven panels. We won’t be able to go in depth, but here’s a quick list:

Gender, Capitalism, Law, and Empire: A Tribute to Judith Tucker

20 Years Since 'Rule of Experts': Current Paths in the Study of Technopolitics

Thinking with Iraq on Climate Change

Book Roundtable on The Flame Within: Iranian Revolutionaries in the United States

Officers and Entertainment: Popular Culture and the State in Egypt

The Casual Consumption of the Middle East: The Region's (Re-)Construction in Entertainment

Jadaliyya Co-Editor Adel Iskandar discusses some takeaways from the MESA conference, and reflects with MK and Bassam. 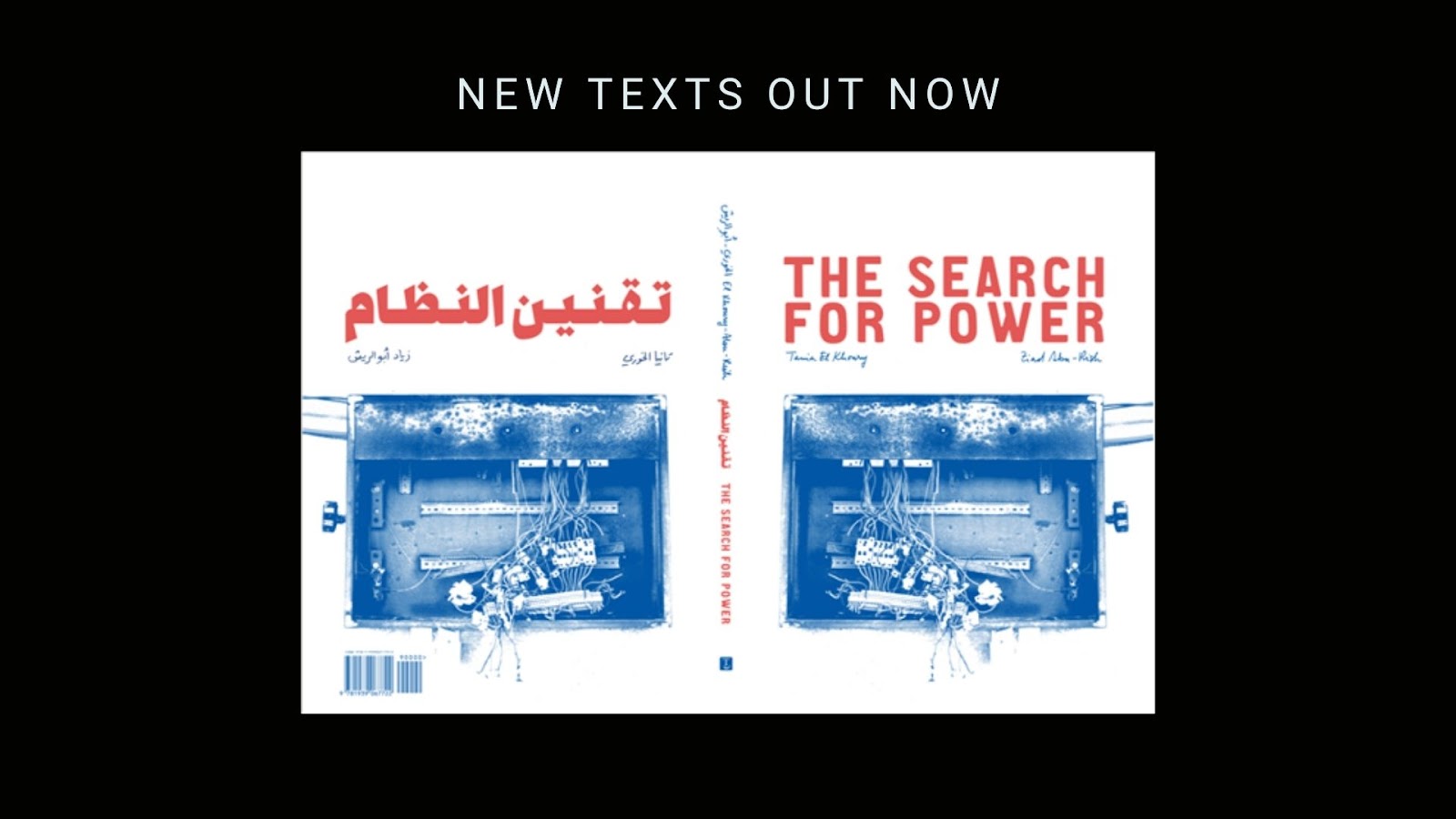 Tadween Publishing is excited to announce the near-release of “The Search for Power,” a new book by Jadaliyya Co-Editor Ziad Abu-Rish and Tania El-Khoury, who is Distinguished Artist in Residence of Theater and Performance and Director of the Center for Human Rights & the Arts at Bard College. This book follows their journey to document the history of electricity black-outs in Lebanon as their paper trail took them across five different countries and as far back as 1906.

Bassam pre-recorded an interview with Tania, which was shown during the show. 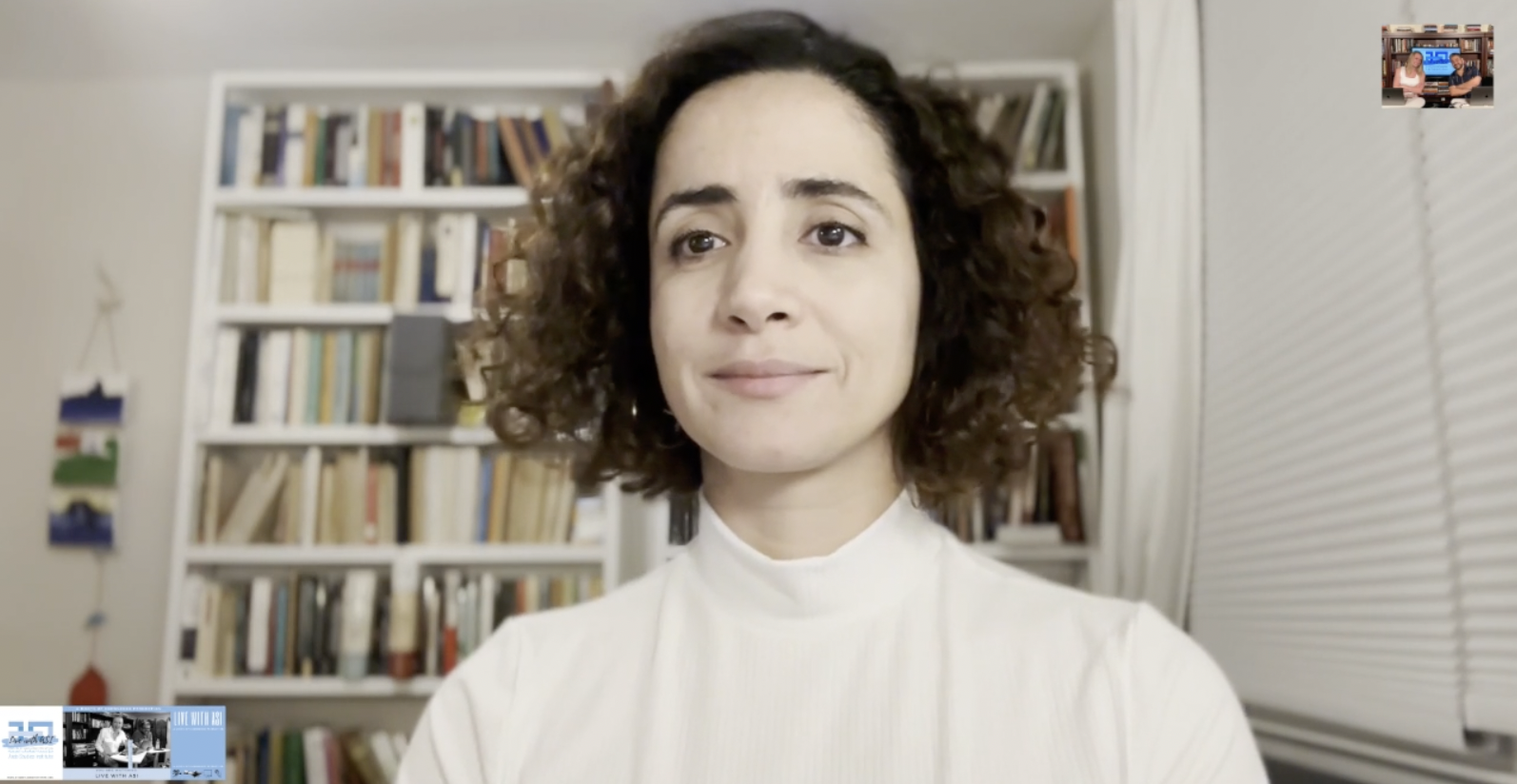 Tania Khoury discusses her recent book, “The Search for Power,” and the story behind this book’s production. 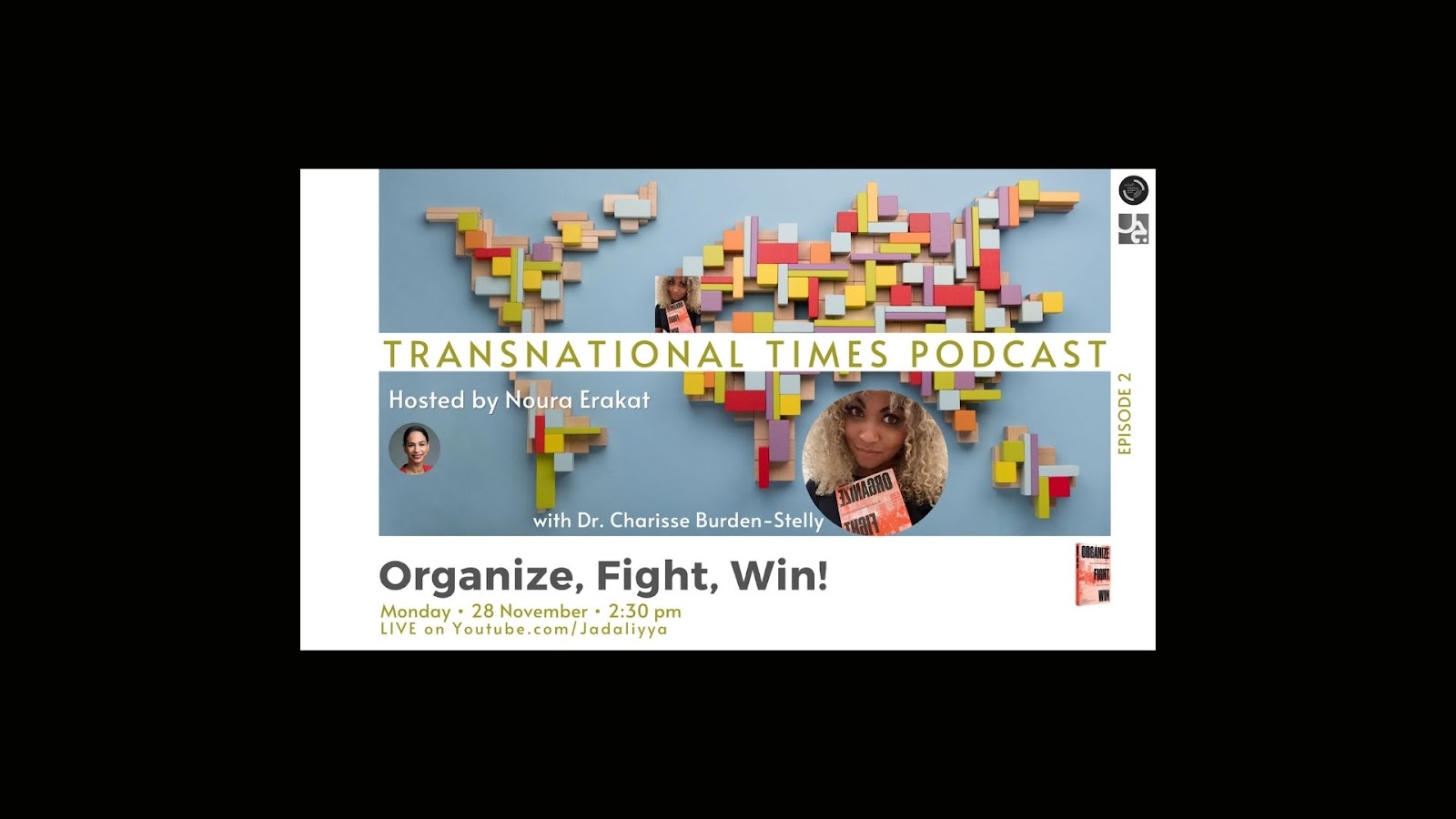 We have a new episode of the Transnational Podcast.

If you’re not familiar, Transnational Times which is co-hosted by Jadaliyya Co-Editor Noura Erakat is a series that seeks to examine the activist praxis, intellectual engagements, historical continuities, and abundant possibilities of transnational solidarities today. The show features activists on the ground as well as scholars, public intellectuals, and journalists committed to the practice and/or study of transnationalism.

In the latest episode, Noura Interviews Dr. Charisse Burden-Stelly about her new book, “Organize, Fight, Win.” This text brings together three decades of Black Communist women’s political writings. In doing so, it highlights the link between Communism and Black liberation. Likewise, it makes clear how Black women fundamentally shaped, and were shaped by, Communist praxis in the twentieth century.

Noura Erakat discusses key takeaways from her conversation with Dr. CBS, including the limitations and strengths of the frameworks of intersectionality, racial capitalism, and other political projects, and much more. 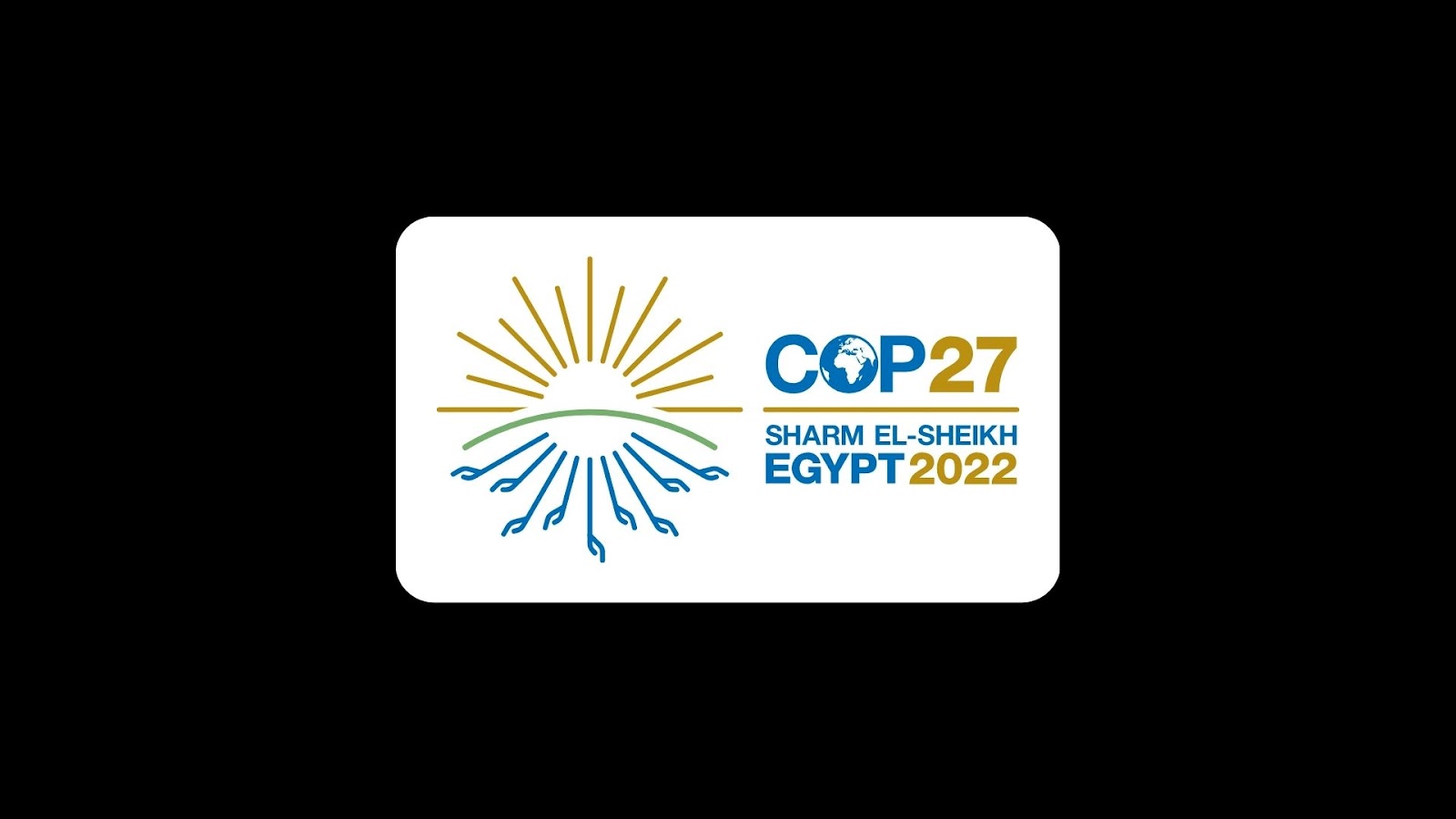 Last month, Egypt hosted the 27th Conference of the Parties of the United Nations Framework Convention on Climate Change, for COP27 for short. According to their website, this conference is a “golden opportunity for all stakeholders to rise to the occasion and tackle effectively the global challenge of climate change facilitated by Egypt on the African continent.”

Carly Krakow, who is the Managing Editor for Special Projects and Environment Page Co-Editor at Jadaliyya, attended this conference in all its contradictions and glory, and in a moment we’ll have her on to share some of her key takeaways.

Carly Krakow returned to the show to share her experience and insights gained from attending the recent COP27 conference in Egypt, and discussed implications moving forward for environmentalism. 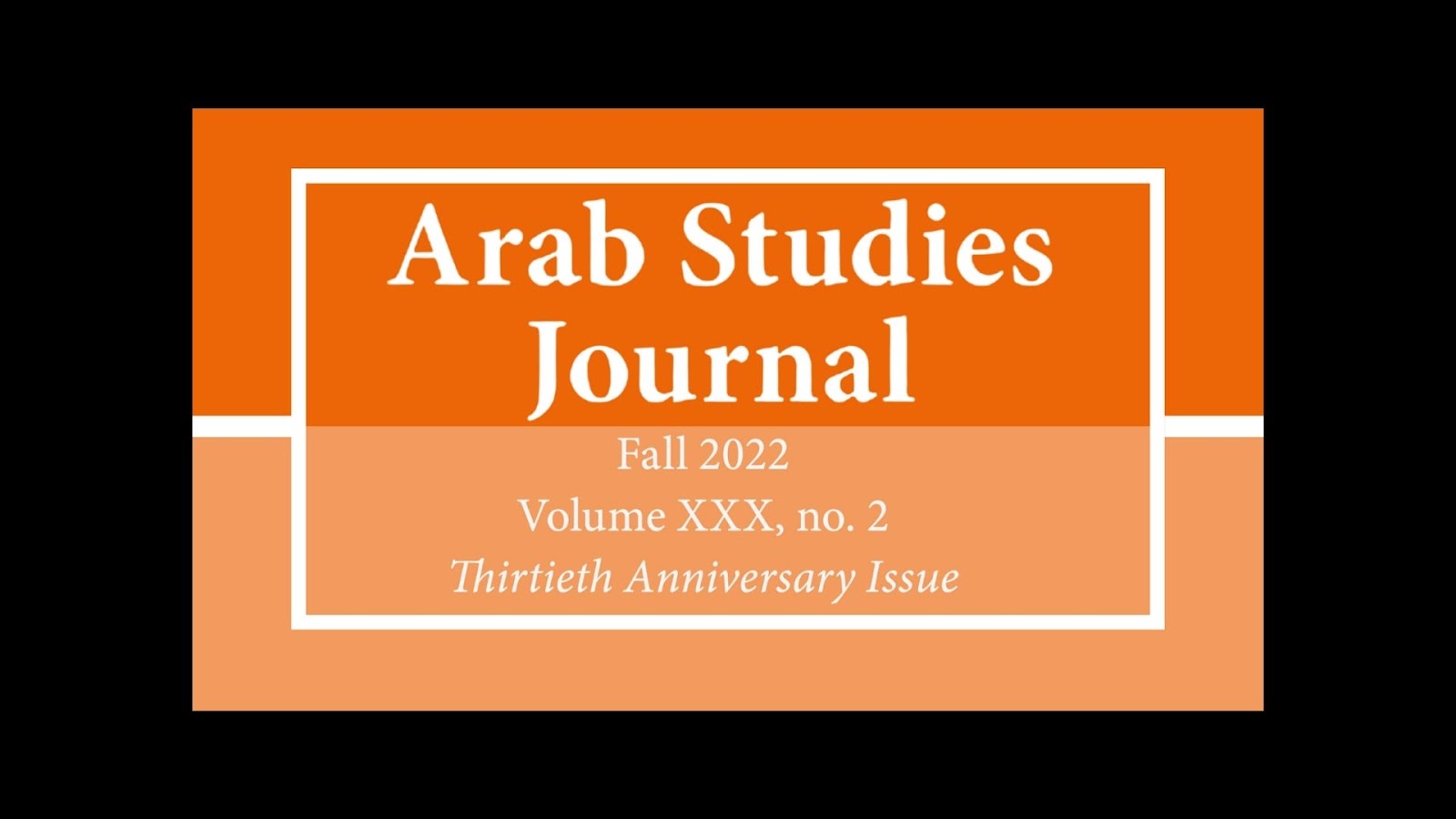 The Editors of the Arab Studies Journal are proud to present the Fall 2022 Issue, available now. This issue consists of a collection of articles, essays, and reviews that provide new perspectives on vital questions of capitalism, nationalism, and the environment.

This issue also features the Arab Studies Journal’s second essays section, titled “titled “Critical Environmental Perspectives in Middle East Studies,” which explores how climate and environmental crises shape the conditions of possibility for research and analysis on and in the Middle East and North Africa.

As always, the issue concludes with an insightful and robust reviews section. The works under review explore critical works on empire, disability, and modernity, representing the breadth of contemporary studies of a dynamically changing region. 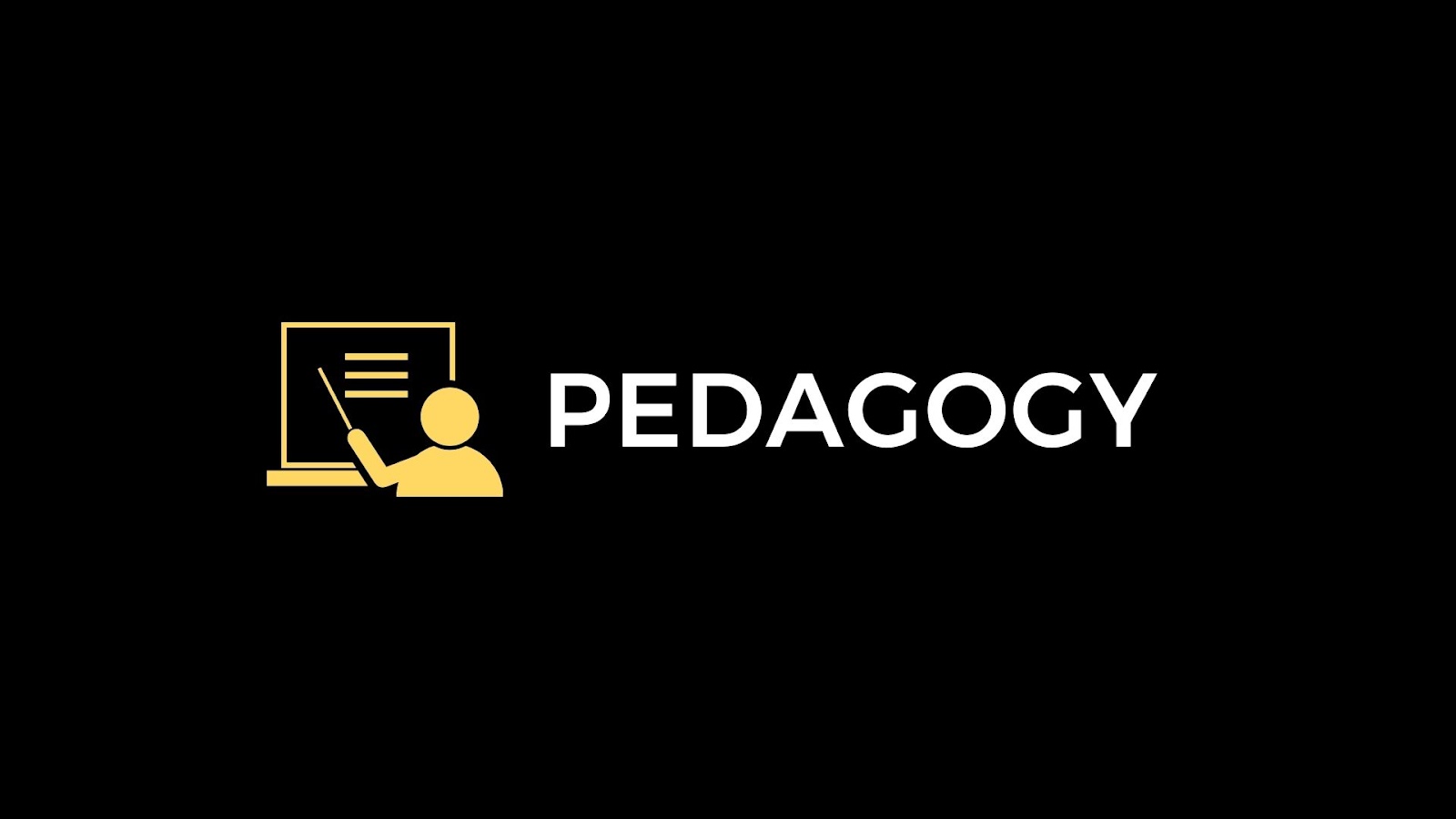 It was a busy month for the Middle East Studies Pedagogy Initiative. They put out the final two installments of the of the six-part Arab Uprisings in Peer-Reviewed Articles series, which presents peer-reviewed articles concerned with the Arab uprisings published in 2010-2020 from our peer-reviewed articles database. The first of the final two installments covers Geopolitical Implications & Foreign Interests, and the final installment covers Regional/International Networks & Systems.

MESPI also published a new installment of the Engaging Books Series. For those that don’t know, Engaging Books is a monthly series featuring new and forthcoming books in Middle East Studies from publishers around the globe. Each installment highlights a trending topic in the MENA publishing world and includes excerpts from the selected volumes.This installment involves a selection of fiction from Archipelago Books. Other publishers’ books will follow on a monthly basis.

Also last month, MESPI put out a new Peer-Reviewed Articles Review, which is a series that presents a collection of journals and their articles concerned with the Middle East and Arab world. This installment is the first part covering Summer 2021, with more to follow.

Finally, we have a new Essential Readings collection compiled by Aya Nassar, titled “Cities and Materiality: The Making and Unmaking of Urban Space in the Middle East and North Africa.”

We recently put out a new episode of the Real Football Podcast, where we took one last glance under the microscope before the World Cup began. We tried to predict dark horse success, as well as crushing failure under the weight of expectations. We also discussed the injuries that will crush the dreams of nations before a ball is kicked, why a November World Cup should never happen again, and the latest FIFA politics controversy, as well as the plight of workers in Doha.

To be honest, though, this has been an amazing world cup. Our colleague and fellow Jadaliyya Co-Editor Abdullah Al-Arian wrote a piece for the New York Times detailing some of the hypocrisies present in much of the discourse criticizing this World Cup, and he’s discussed this and the ways in which orientalist perceptions have colored this discourse in a number of interviews, such as Democracy Now a few days ago.

NADYA: He would have joined us on the show but he’s attending the Andalusian showdown between Morocco and Spain.

Jadaliyya Co-Editor Abdullah Al-Arian made a surprise, last-minute appearance on the show, having just witnessed Morocco’s round-of-16 victory against Spain live in Doha, to share immediate reactions and reflections on the World Cup thus far. 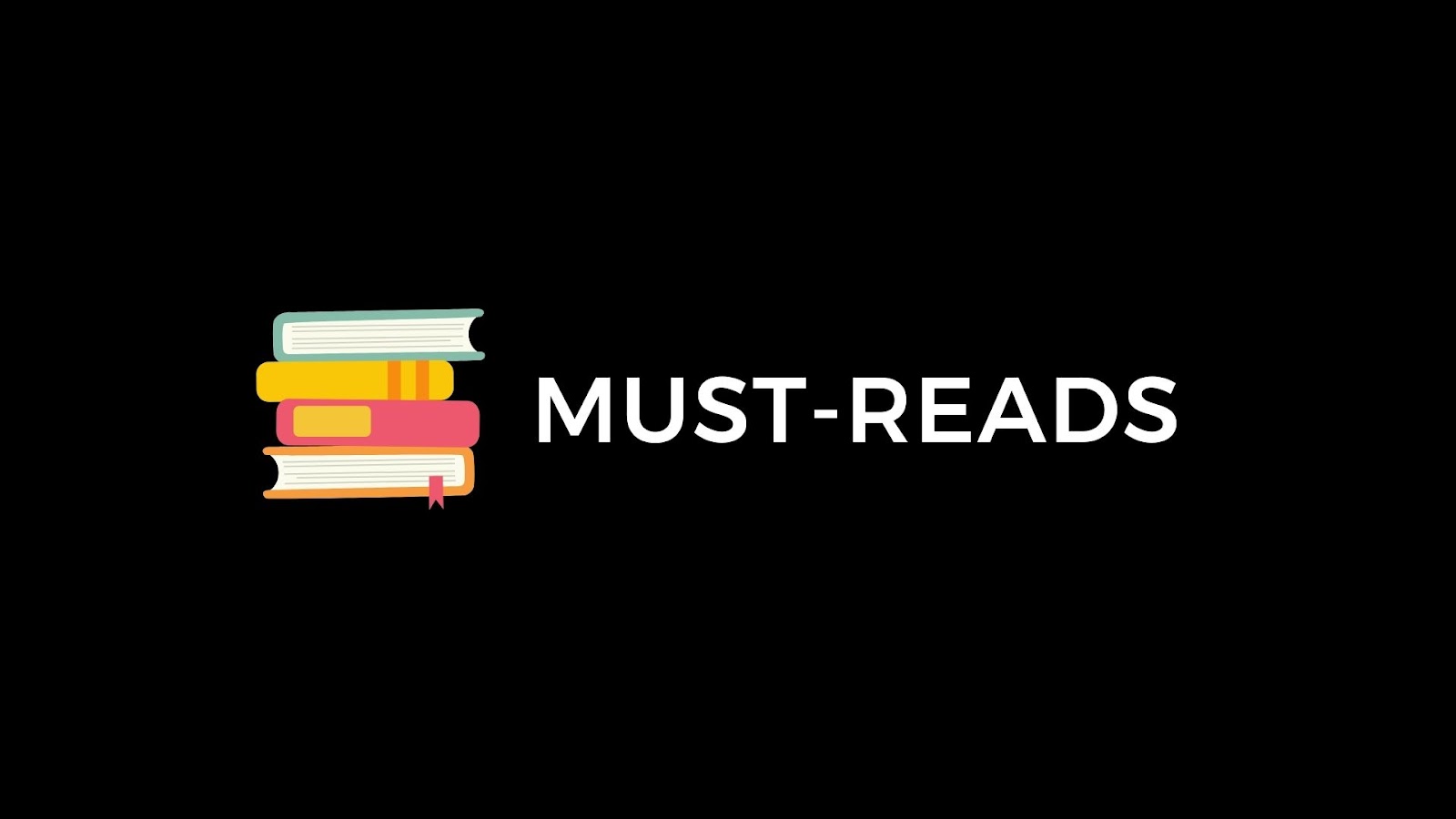 In a piece titled “Resolving UNRWA’s Financial Crisis is Possible with a Fundamental Change in Approach in Vision,” co-authored by Francesca Albanese, Jalal Al Husseini, Diana Buttu, Michael Dumper, Ardi Imseis, Damiam Lilly, and Lex Tekkenberg, and myself, we argue for a much-needed shift in UNRWA’s work.

We advocate that this shift should be “from providing support for humanitarian needs and basic human development, to a comprehensive response on all aspects of the Palestinian refugee question, including a more expanded focus on protection and the pursuit of durable solutions.”

In a piece titled “Growing Utopian Crack,” Jan Yasin Sunca offers reflections on the decade since the Rojava Revolution in the Kurdish areas of northern and northeastern Syria. Sunca argues that the utopianism of the revolution results from historical exigency which, in turn, bridges the gap between the realness of the revolution and the utopian freedoms that it promises.