Disciplinary Woes and Possibilities: Political Science in the Context of the Uprisings 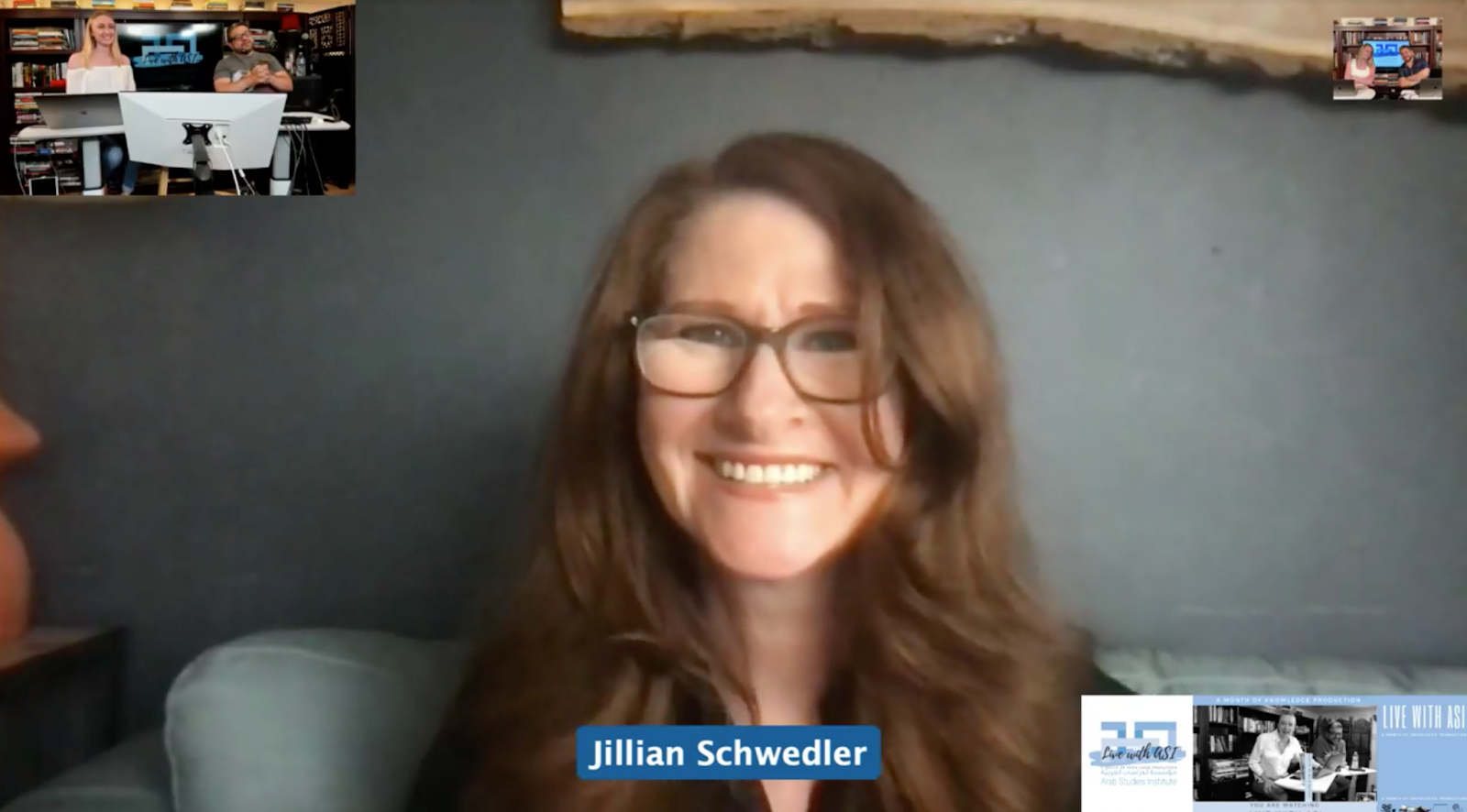 On 27 April, ASI held the fourth signature panel in the Ten Years On project. As we’ve featured in previous episodes, the Ten Years On project brings together seventeen of our partners to produce resources for educators, researchers, students, and journalists to more critically understand the Arab Uprisings, and their various dimensions, over the past decade.

This fourth panel, titled “Disciplinary Woes and Possibilities: Political Science in the Context of the Uprisings,” was organized by the Chicago Center for Contemporary Theory at the University of Chicago and the Department of Political Science at The American University in Cairo. The panelists discussed the limitations of mainstream political science in grappling with the Arab Uprising, and how to begin addressing those limitations.

This episode of Live with ASI featured three must-read Jadaliyya articles from April 2021. First, in “UNRWA Once Again in International Spotlight,” Francesca Albanese and Samar Muhareb convey their expectations regarding the upcoming UNRWA conference, and they urge the international hosts to use the opportunity to chart out a vision that goes beyond “managing the refugee problem” and toward a comprehensive and involving refugee voices.

Second, in “The Revival of Moorish Empire and the Moroccan Far Right,” Cristina Moreno-Almeida looks at social media and meme culture to explore the presence and messaging of the far-right in Morocco. She calls for rethinking the Moroccan political spectrum with a serious consideration of the role of digital fascism. 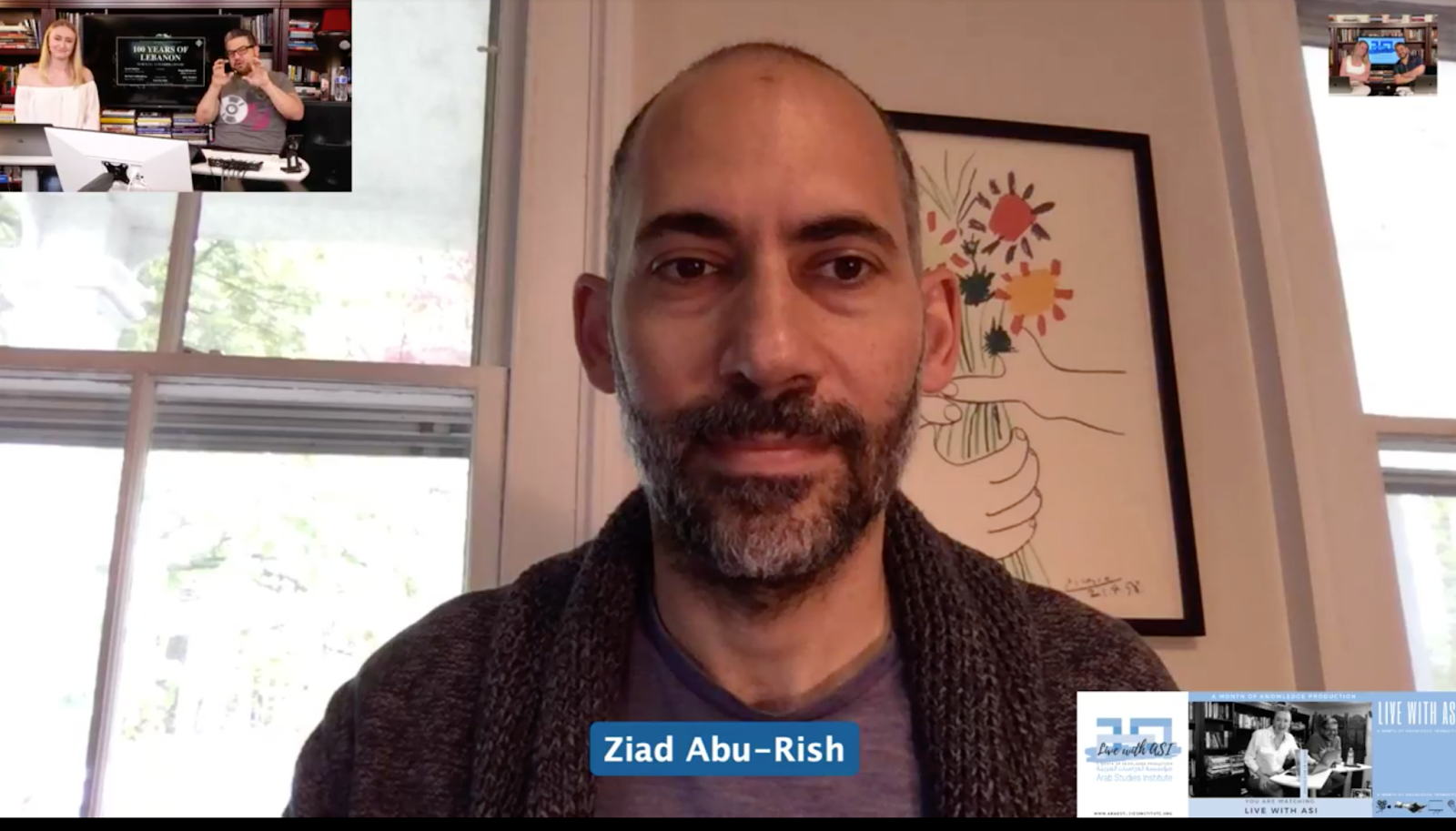 Jadaliyya Co-Editor, Ziad Abu-Rish, joins the broadcast to discuss a recent collaborative live event reflecting on one century of Lebanon.

To commemorate Lebanon’s 100th birthday, the Center for Contemporary Arab Studies at Georgetown University organized a panel of scholars from a variety of disciplines and backgrounds to reflect on Lebanon’s history and present.

The panelists shared their particular expertise and addressed continuities and key shifts over the last century of Lebanon’s existence as a state. Unfortunately, the recording of the amazing panel won’t be published for a while, so we have the next best thing for you: the panel’s organizer-extraordinaire, Ziad Abu-Rish, is here to talk with us. 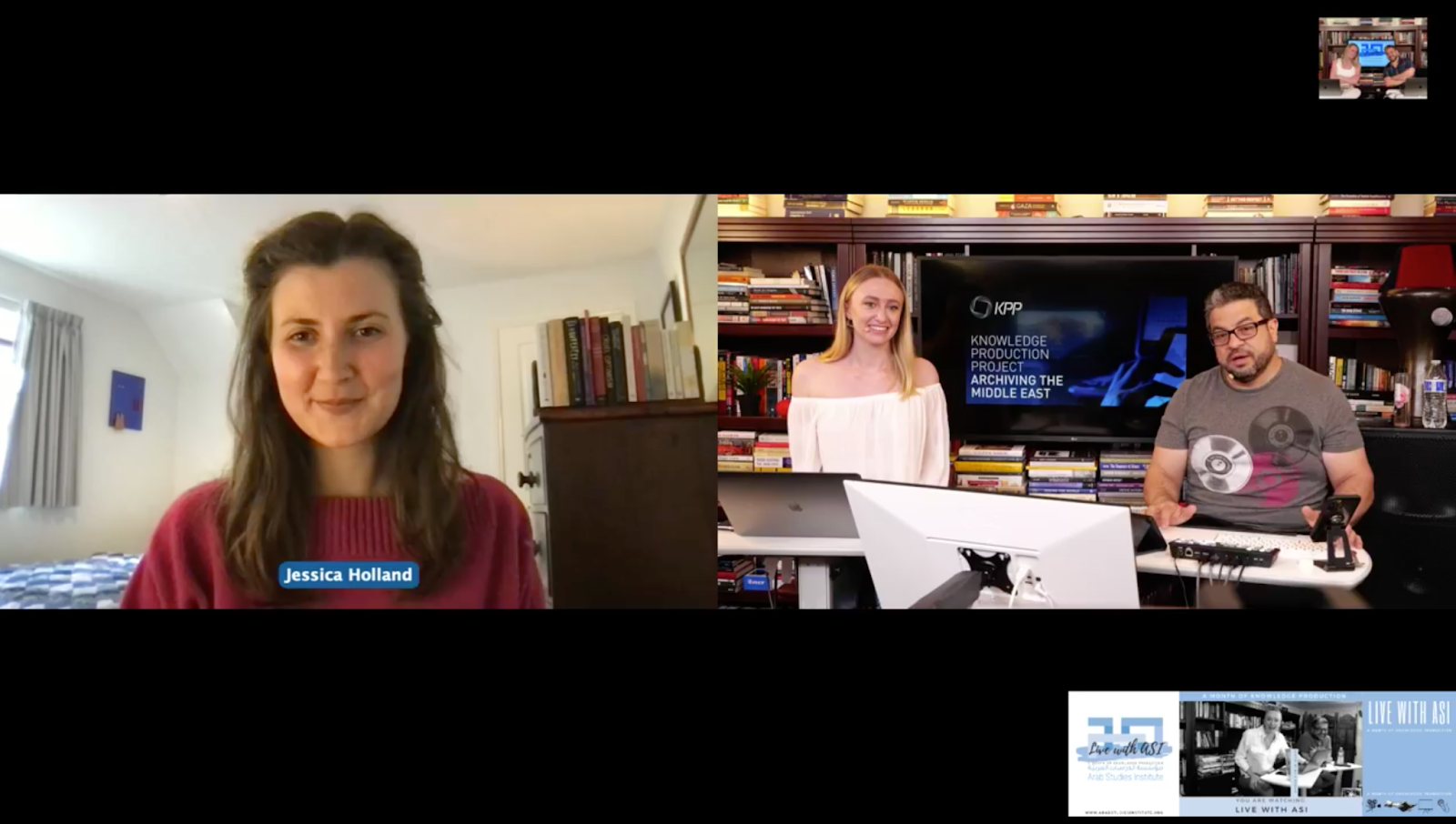 The Knowledge Production Project (KPP) was founded in order to address issues that arise in producing, disseminating, and accessing knowledge. KPP is a platform encompassing five interactive search and visualization tools that provide users with unprecedented access to sources of knowledge about the Middle East. Through KPP, users are able to search for specific topics, explore networks of think tanks and government bodies, seek out websites and blogs, and identify research patterns. 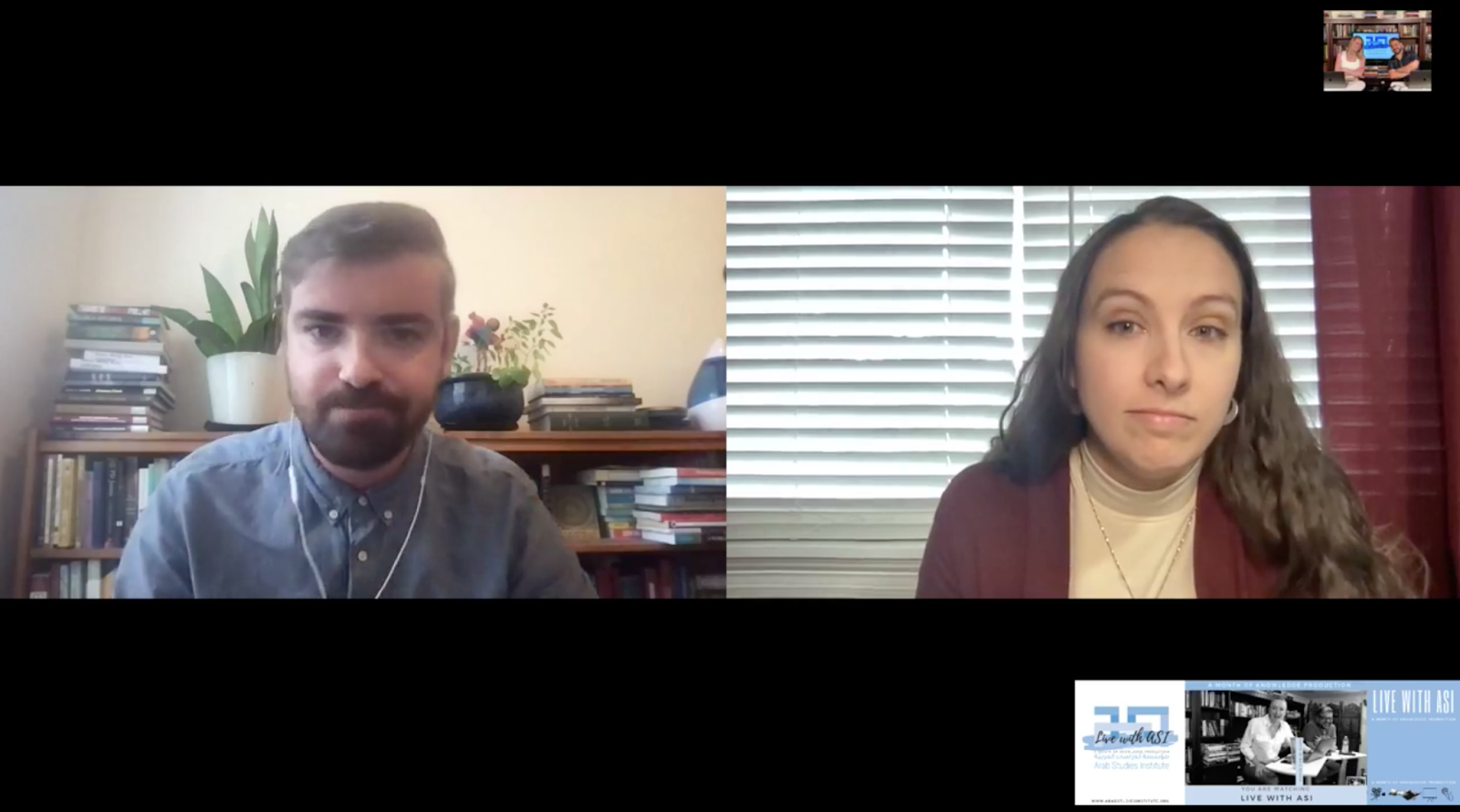 Environment Page Co-Editors Owain Lawson and Brittany Cook spoke on the founding of the page, the content the page has produced over the past year, and where the page will go from here.

Jadaliyya celebrated the one-year anniversary of the Environment Page. Over the past year, the page Co-Editors have sought to cultivate a space for engaging critical questions about environmental issues in the region. The page has produced expertly researched articles, innovative roundtables, the “Environment in Context” podcast series, live events, interviews, and more. Noura Erakat joins LWA in-studio to discuss her new podcast as well as interesting details from the first episode.

This episode debuted a new podcast, Transnational Times. Hosted by Jadaliyya Co-Editor Noura Erakat, this series will examine the various dimensions of transnational solidarity through engaging discussions with activists on the ground, scholars, public intellectuals, and journalists committed to the study and practice of transnationalism.

Noura interviewed Darryl Li regarding Li’s new book, The Universal Enemy: Jihad, Empire, and the Challenge of Solidarity. They discussed the politics of transnational Islamist fighters, their universalist ideals, and reflections on solidarity under US domination.

Reevaluation or Retreat? How a Biden Administration will Approach Israel/Palestine Featuring (32:23) 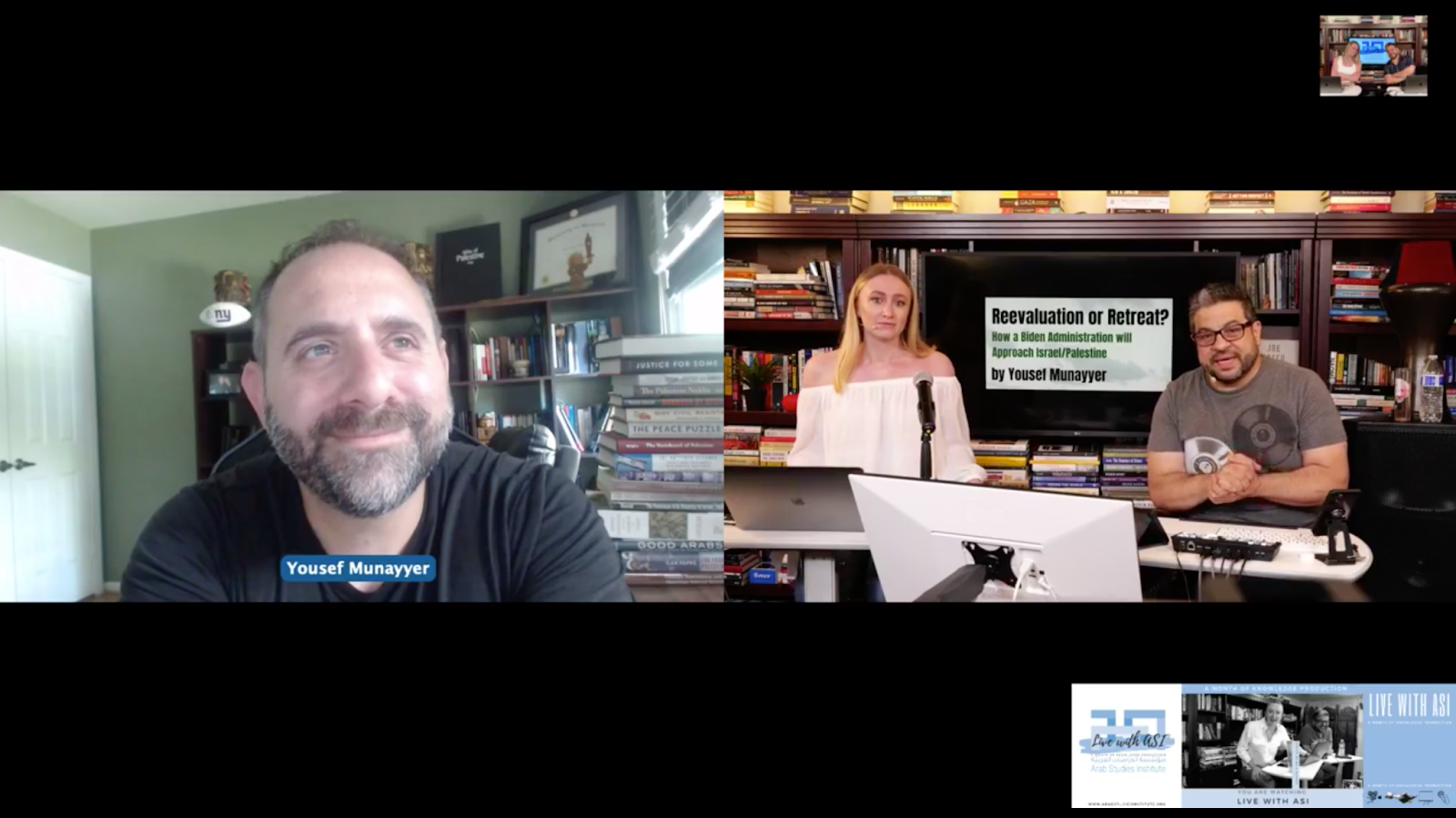 Yousef Munayyer joins live to recap his recent event about the Biden administration’s current and projected policies in Israel/Palestine.

ASI co-sponsored an event hosted by GMU’s Middle East and Islamic Studies program titled “Reevaluation or Retreat?”, in which Yousef Munayyer discussed the aftermath of four years of the Trump administration’s foreign policy, what sorts of challenges the current Biden administration is facing, and what this context could mean for the future of US policy on Palestine. 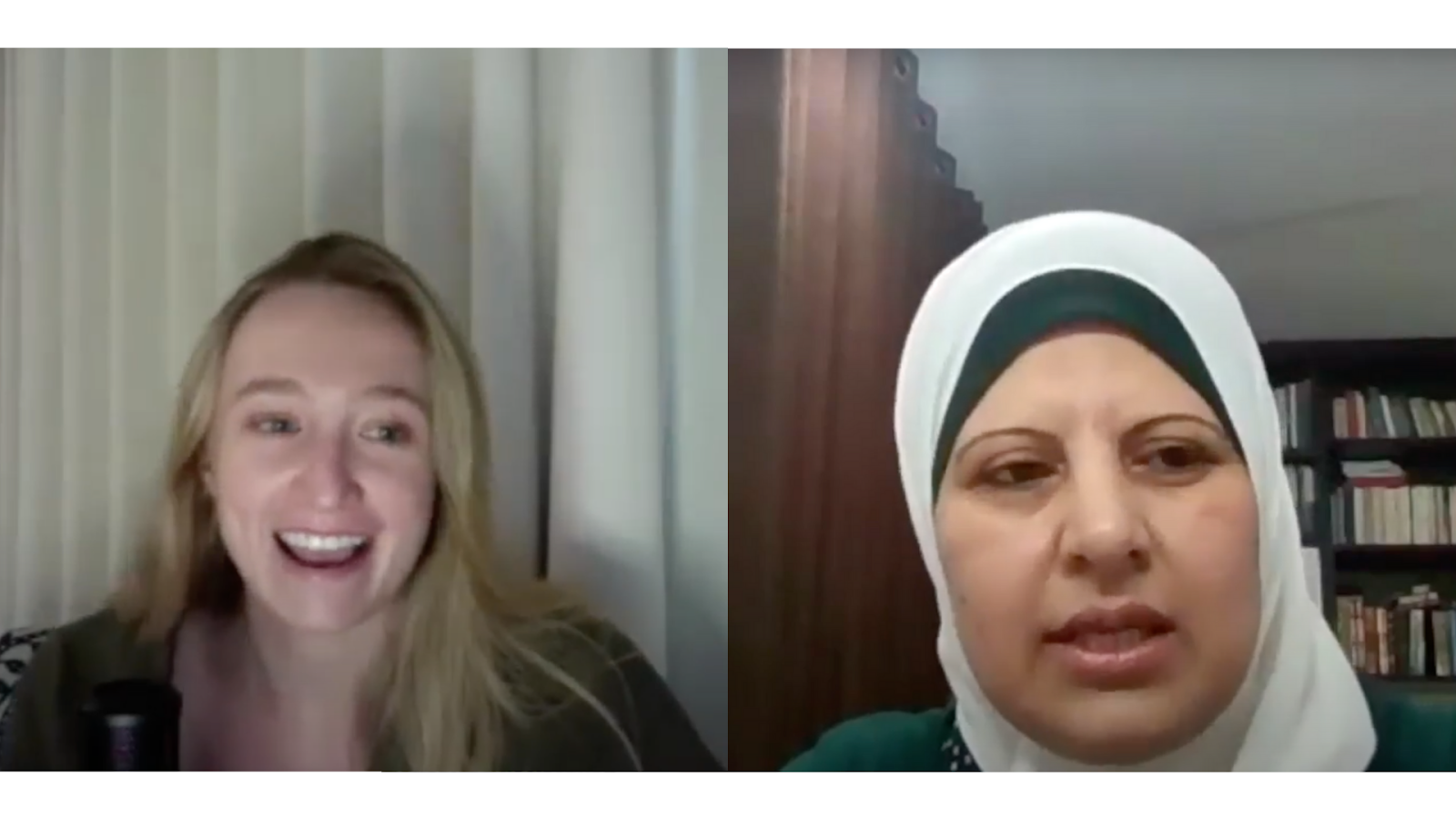 For the podcast’s second episode, Mouin Rabbani spoke to Maha Samman and Mick Dumper regarding the politics of holy cities and discussed the interaction of conflict, religion, and political power.

Khmissa Panel: The Other Side of Political Detention in Morocco (46:12) 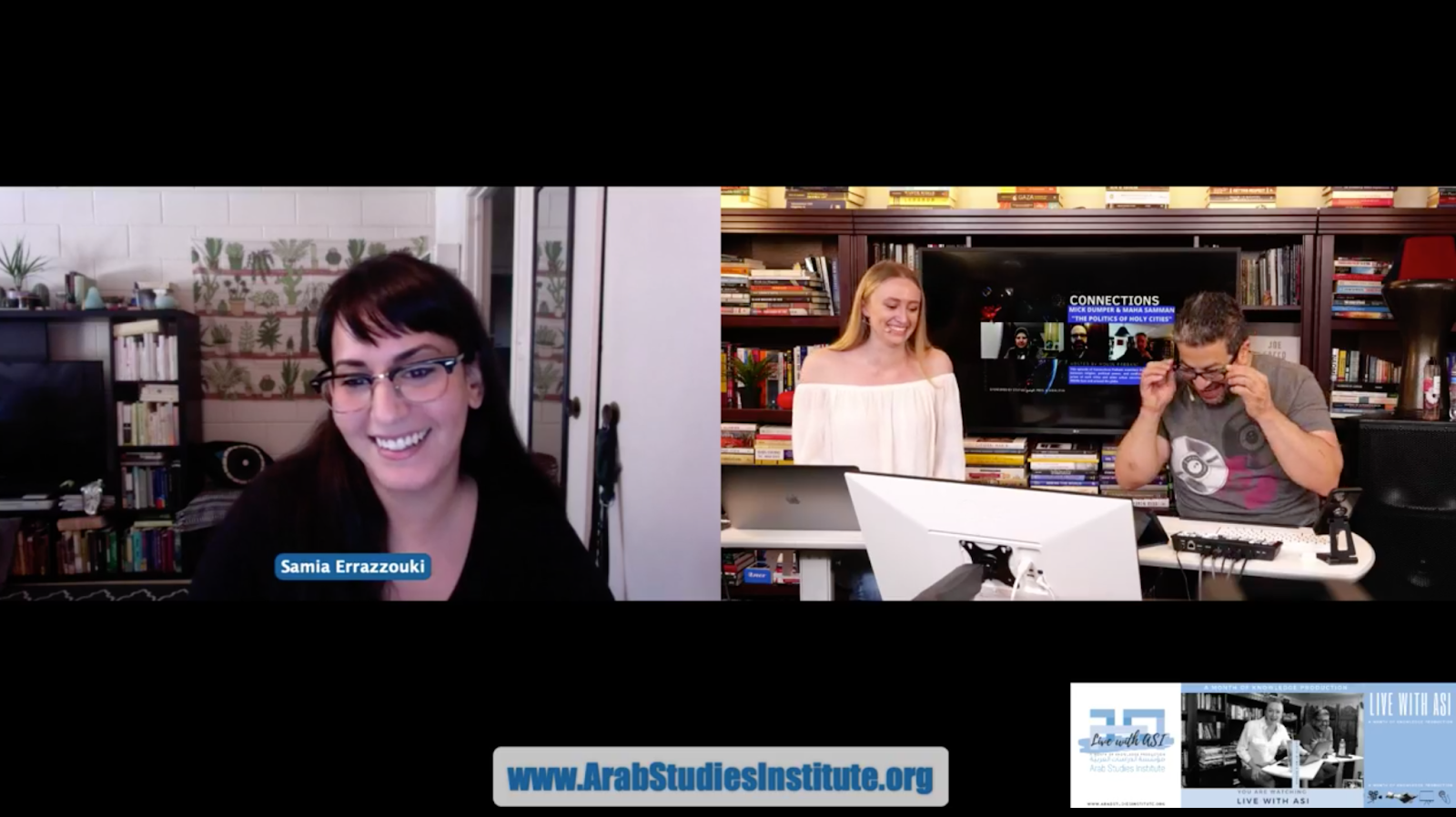 Jadaliyya Co-Editor Samia Errazzouki returned to the show to speak on the significance of this event and the experiences of families of political prisoners, and gave a few words on the Maghreb Page and ASI.

Last month, an event organized by the Khmissa feminist collective and Jadaliyya featured a conversation with family members of incarcerated activists and journalists in Morocco. The discussion provided insight into the ways in which family members of the imprisoned struggle in the face of state repression. 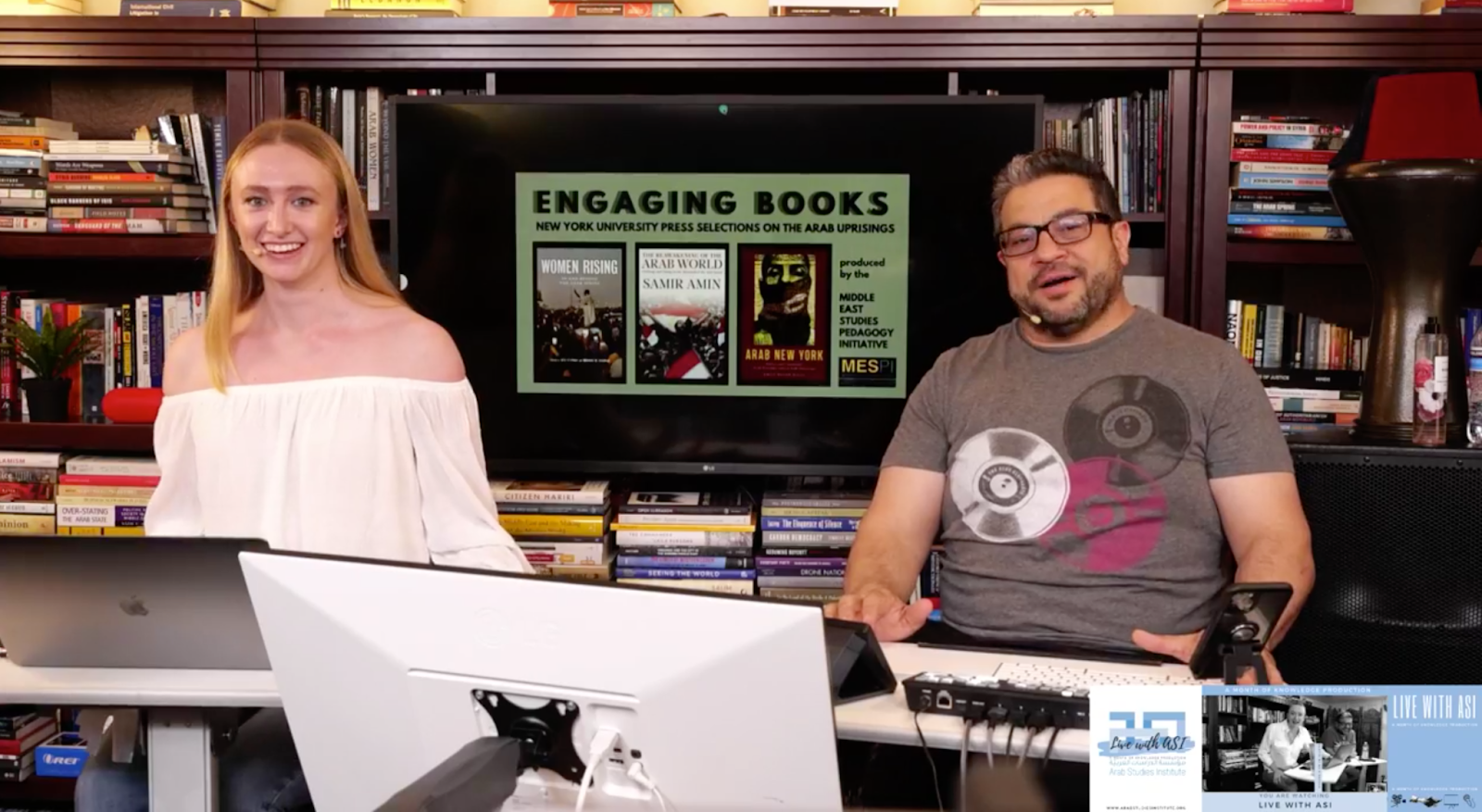 In anticipation of the forthcoming Pedagogy JadMag, MESPI offered a sneak-peek into the mag with advanced publishing for one of the featured interviews. In “Teaching the Mediterranean,” Jacob Bessen interviews Julia Clancy-Smith on her teaching experiences and approaches. We will link the sneak-peak in the digest, but be sure to read the entire piece when the Pedagogy JadMag is released in the summer. 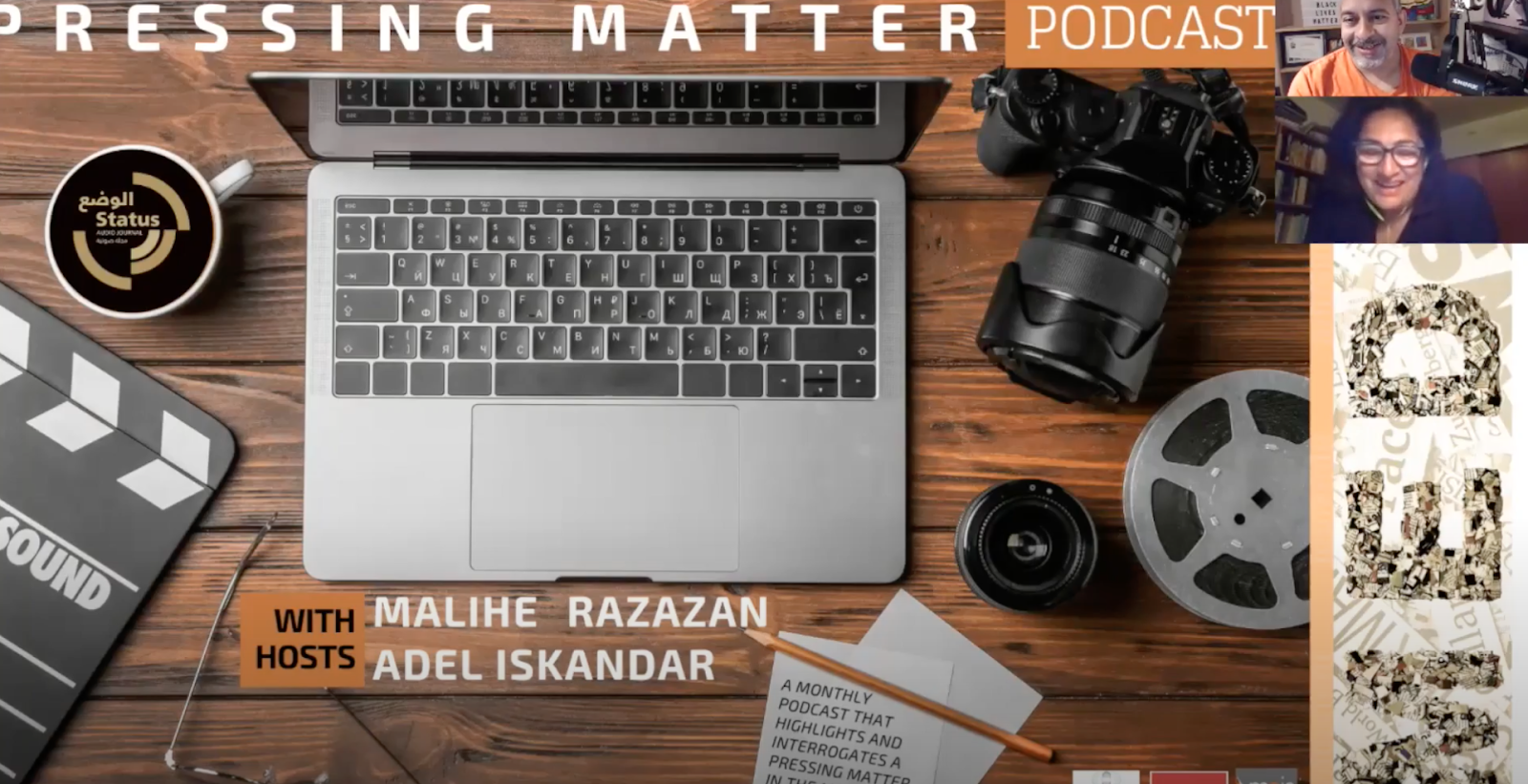 Last month we debuted our new media segment, Pressing Matter, which features excerpts from a new monthly podcast hosted by Adel Iskandar and Malihe Razazan that addresses critical issues in the media. In their third episode, Malihe and Adel discuss World Press Freedom Day, and analyze the insights and issues demonstrated by the Press Freedom Index published by Reporters Without Borders.

As usual, we aired the first five minutes of their new episode during the show, and the full episode will be published shortly on Jadaliyya and Status/الوضع. 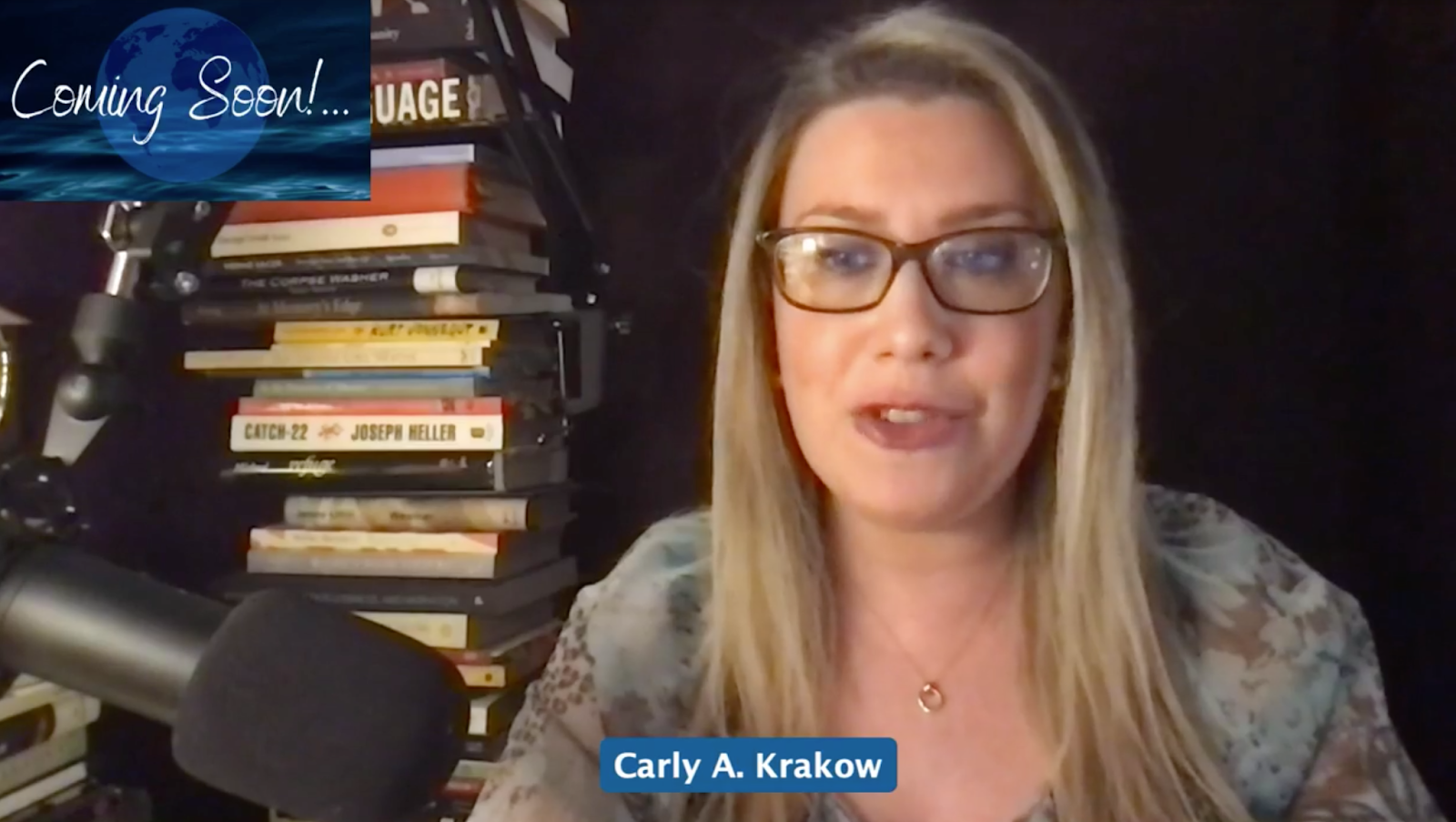 In this month’s installment of “The Catch-Up,” Carly A. Krakow discussed lead poisoning from water contamination due to lead pipes as a pressing example of ongoing environmental racism, following Joe Biden’s announcement of a proposal to replace all lead pipes in the United States. She also addressed the conviction of Derek Chauvin for the murder of George Floyd, and Chauvin’s appeal this past week. Next, she covered the dire situation in India as the country has surged past 20 million cases of COVID-19.

Carly shared the exciting news that her segment is being launched in a new form as its very own video podcast! Stay tuned for further updates about the launch … coming soon! Cat Haseman speaks directly to students during her monthly segment.

It’s finals season, so this month Cat kept it short and sweet, pointing out ways graduate students can maximize ASI’s online platforms to collate research sources for their final papers.

As always, keep up with the latest news via Jadaliyya’s media roundups:

NEWTONs (New Texts Out Now) offer exclusive looks and in-depth analysis from scholars about their recent publications. This month seven authors offered up insights into their research motivations and methodologies.

Here is a list of all the NEWTON interviews that came out in the month of April: 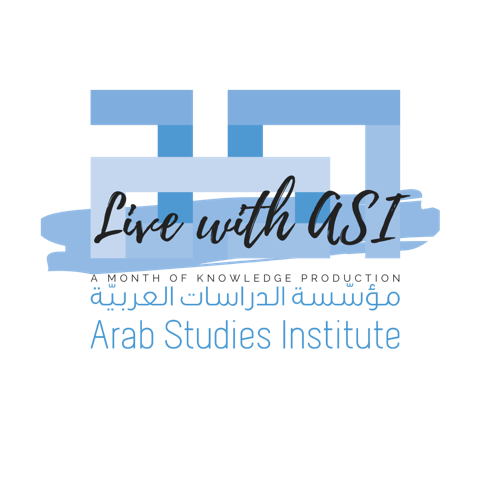