Ten Years On: Displacement, Disruption and Scholarly Production in the Aftermath of Uprisings (Video)

Ten Years On:
Displacement, Disruption and Scholarly Production in the Aftermath of Uprisings

This is the eigth signature event of the
Ten Years On: Mass Protests and Uprisings in the Arab World Project 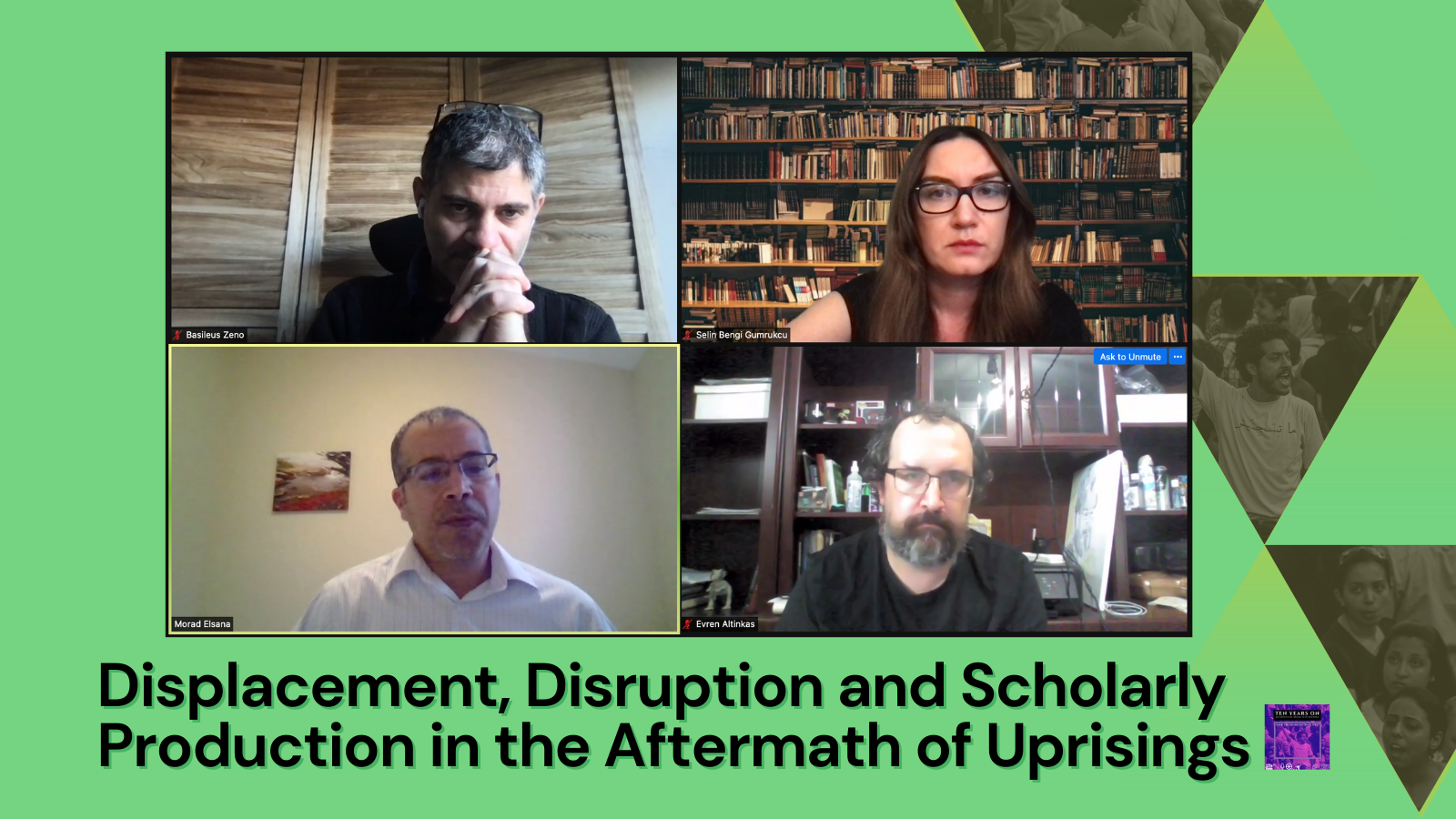 Ten years on from the uprisings in the Arab world—and with similar anniversaries in Iran and Turkey just past or upcoming—the specific effects of the displacements triggered in the aftermath of these events remain understudied. For example, in much of the region counter-revolutionary forces have targeted universities and scholars, clamping down on academic freedoms, criminalizing forms of research and study, and even reframing whole disciplines around national security priorities. Among the many impacts of authoritarian retrenchment has been a significant brain drain from parts of the region. How have these post-uprising displacements affected cultural production and knowledge production within and about the region? This panel explores the disruptions to research and the circulation of ideas in and about the region as well as some of the generative possibilities and new networks that have been produced as a consequence of the many different forms of displacement that have affected scholars, students, activists, intellectuals and artists in the aftermath of uprisings.

Hamid Alawadhi (discussant) is currently an Adjunct Professor of Linguistics and Middle Eastern Culture at Point Park University in Pittsburgh, Pennsylvania. He also teaches French at the University of Pittsburgh. He is a former Professor of Linguistics and Translation at the College of Arts and Humanities, Sana’a University, Yemen. He holds a Ph.D. in Linguistics and Translation Studies and an M.A. in Translation from the Sorbonne. He was the Chief Editor of the Second Edition of the Encyclopedia of Yemen, published in 2003 in four volumes. He is the author, translator, editor, or compiler of more than ten books and numerous articles. Dr. Alawadhi also had a diplomatic career, serving as an Ambassador and Permanent Representative of Yemen to UNESCO for five years. In addition, he was the Dean of the College of Arts and Humanities at Sana’a University and then the Dean of the Diplomatic Institute of the Ministry of Foreign Affairs of Yemen. In 2014, he became Deputy Minister for Political Affairs in the Yemeni Foreign Ministry.

Evren Altinkas received postgraduate degrees from King’s College London in 2000 and from Dokuz Eylul University in 2003. He obtained his doctoral degree from Dokuz Eylul University in 2011 based on his dissertation comparing the development of the concept of intellectuals in Europe and in the Ottoman State/Turkey. Since July 2018, Altinkas has been employed as an Assistant Professor in the Department of History, University of Guelph. His research areas are the History of the Middle East, Turkish History, Intellectual History and the Transformation from the Ottoman Empire to the Modern Middle East and Turkey. He received the Chevening Scholarship for the academic year 1999-2000, and is a MESA Global Academy Fellow for the academic year 2021-2022. Altinkas is the newly appointed editor of H-TURK. Dr. Altinkas has several academic articles and book chapters published and has two articles in the process of publication as of September 2021. Both articles are about the Turkish War of Independence and the Unionist connection.

Morad Elsana is a research scholar and professor at American University in Washington, DC. Prior, he served as a visiting assistant professor of law at the California Western School of Law and fellow of the Israel Institute. Dr. Elsana holds a doctoratal degree in Juridical Science from the Washington College of Law. He is the recipient of several prestigious fellowships such as the Fulbright Outreach fellowship; the NIF Civil Rights Leadership fellowship; and the McGill University Middle East Program for Civil Society & Peace Building fellowship. His research focuses on human rights, indigenous peoples’ rights, legal pluralism comparative law, racial justice, and the Arab Minority in Israel.

Selin Bengi Gümrükçü is a Postdoctoral Associate at the Center for European Studies (CES), Rutgers University. She received her PhD from the University of Zurich in 2014 with a dissertation titled “Reconstructing a Cycle of Protest: Protest and Politics in Turkey, 1971-1985”. Before joining CES, she worked as a visiting scholar/lecturer at the Department of Political Science, Rutgers University (2018-2020), as a lecturer (2014-2015) and Assistant Professor (2015-2016) at Izmir University, and as a research assistant at Izmir University of Economics (2007-2014). During and after her PhD, she held visiting positions at Bielefeld University, Sciences Po Paris, University of Paris 8, and more recently the European University Institute.

Basileus Zeno is Karl Loewenstein Fellow and Visiting Lecturer in Political Science at Amherst College. He received his Ph.D. in Political Science at the University of Massachusetts Amherst in 2021. Dr. Zeno’s research centers around themes of forced migration, violence, colonial legacies, interpretive methodology, nationalism, and sectarianism in the Middle East. He has conducted extensive ethnographic fieldwork with Syrian asylum seekers and refugees in the United States, and has published in the Middle East Law and Governance journal and Jadaliyya and has other forthcoming peer-reviewed articles. Additionally, Dr. Zeno is a MESA Global Academy Fellow and part of the LSE research project “Legitimacy and citizenship in the Arab world.”