Have you heard about “win-win” cooperation in international development? What you did not hear about is how often the same party can win. And, when it comes to the European Patent Office’s (EPO) treaties with emerging countries, it is fair to say that the European side won…twice. The patent validation treaties Europe  has signed with its counterparts in Tunisia, Morocco, Moldova, Georgia and Cambodia is the perfect example.

Intellectual property (IP) is like a temporary legal monopoly given to a firm or a person in order to make up for investment in innovation. Although patents often last for twenty years, the means to circumvent this cap and increase the monopoly duration are more and more numerous. Pharmaceutical companies and tech companies rely heavily on IP in their business models.

IP is everywhere. If you are reading this paper, you must have encountered at least one of the common IP symbols in your newspaper, on your phone, laptop, or tablet. © is for copyright, and ® or ™ indicates that a trademark is or will be effective. Not to mention  the recurrent mention of “patented in” followed by the territory.

Thanks to EPO patent validation treaties, European patent applicants and holders extend their IP rights to non-member countries. However, these treaties are not reciprocal. Domestic applicants from the latter cannot validate their patents in the vast territory covered by the EPO. As a matter of fact, in2013, when the Executive branch proposed the treaty to the parliament, and then when the elected officials discussed the draft, the issue of reciprocity had never been evoked. Thinking that it seemed like an obvious problem, I contacted the minister. He defended the treaty and told me that he believed it was reciprocal. Asked about the reciprocity, the EPO confirmed to me that there was not such a thing.

So far, Morocco, Moldova, Georgia, and Cambodia have signed such treaties. In 2014, Tunisia also signed, somewhat discreetly, a treaty that stands higher than domestic laws. It came into effect in 2017.

The territorial coverage of IP is exactly what EPO validation treaties aim to tackle. On its website, it is introduced as follows: “under the national law of the extension and validation states, a European patent extended to or validated in those states has the effect of a national patent granted by the relevant state and is subject to the same conditions. The patent geographic coverage.” The treaties were voted by parliaments and promulgated by the executive branch. Still, they can be unfair. You have to read between the lines to see that European patents, and only European patents, can be extended abroad. Moroccan, Tunisian, Georgian, Moldovan or Cambodian cannot.

IP can have dire consequences, particularly in hampering access to affordable medicine. Tunisia relies heavily on generics. Seventy three percent of the drugs produced by Tunisian pharmaceutical companies are no longer regulated by patents. Extending European patents to Tunisia has one major consequence: increasing the cost of essential medicines. The Tunisian people would bear a considerable share as the out-of-pocket expenditures in Tunisia are insanely high (thirty-eight percent) compared to the rest of the MENA region (twenty-eight percent), and the world average (eighteen percent).

If COVID-19 had one advantage, it would be raising awareness about unequal access to medicines throughout the world. This disparity stems, in part, from weak supply chains and lack of domestic production. The main reason for these inequalities, however, remains IP hindrance, which makes more recent drugs unaffordable for patients in the Global South. Health coverage in Tunisia could be jeopardized by this treaty.

According to a high-ranking civil servant in the Health Ministry explained that pharmaceutical companies have not considered Tunisia as a potential market given the relatively small population and the low purchasing power. “Since the signature of the EPO Treaty, Tunisia has become a box to check on the EPO application form,” she sighed. She meant it literally.

Five years after the treaty came into effect, more than seventy-thousand health-related patent applications  checked the “Tunisia box,” based on the EPO database Espacenet. However, Tunisian counterpart INNORPI only provided a list of five users. All are pharmaceutical companies from Spain, US, UK, and Sweden. According to another high-ranking Tunisian health public servant, this is a “catastrophe.” 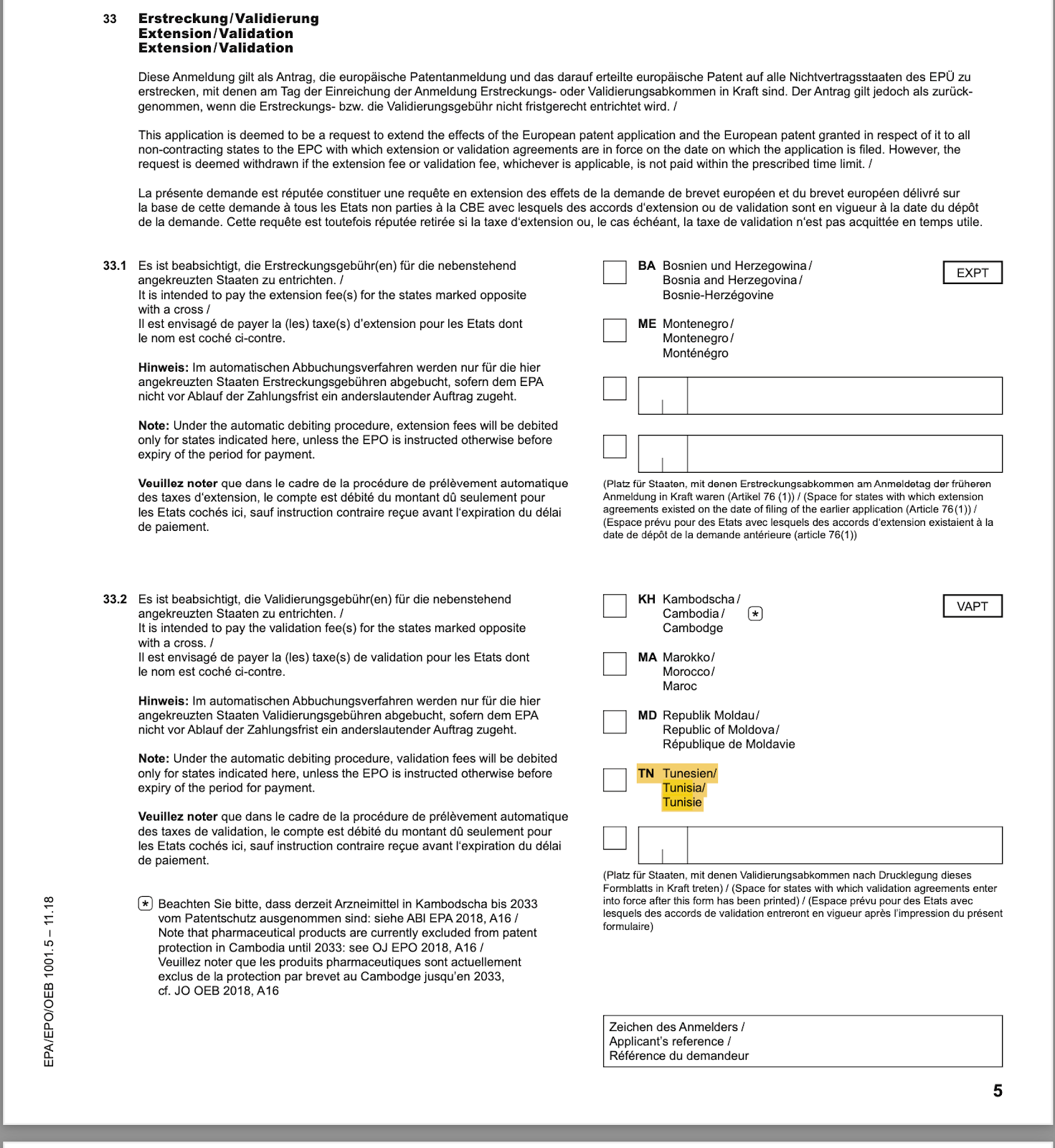 Before 2017, foreign pharmaceutical labs did not systematically register their patents in Tunisia, considering that it was deemed a negligible market and the red tape was considerable. Now, Tunisia is just a box to be checked next to Moldova and Morocco for the patents of new drugs to be applied. Domestic production, mainly generics, covers seventy percent of the needs of the Tunisian market, but it is directly threatened by the EPO treaty.

Let me give you a concrete example of how IP hinders access to affordable medicine. Tunisia bought Herceptin® from the patent holder, the Swiss pharmaceutical company Roche®, as a treatment for breast cancer. The state’s public insurance fund paid more than nine-hundred USD for each dose from 2008 to 2016. Relative to GDP, Tunisia paid more than any European country. It was the fund’s biggest expenditure.

Although the price has gradually decreased to five-hundred USD, it remained much more expensive than its biosimilar (i.e. generic) Hertraz®, manufactured by the American Mylan®, and sold at 220 USD. The latter was only commercialized after the end of Roche’s patent. If Roche had extended and validated its patent in Tunisia, Tunisian taxpayers could have been obliged to pay the highest cost longer.

Whose fault is it? Who is to blame?

Tunisian officials, undoubtedly. But also the European Union, in addition to the European Patent Office. In fact, the EU has consistently endeavored to harness Europeans’ IP rights in Tunisia. The same provisions on validation and extension, let alone trade secrets, were included in the draft of the Deep and Comprehensive Free trade agreement that was negotiated at the same time as the EPO’s treaty.

In the first place, the main rationale behind signing this treaty was the hope to see more Foreign Direct Investments from the EU. The other goal was to see Tunisian inventors granted IP protection in EPO member states. Neither of these occurred.

The silver lining is that the Tunisian-European treaty has a five-year term renewal. The Moroccan for example does not. This means that it’s easy to withdraw from it. In the event of such a withdrawal, it would be worth thinking about how international cooperation can genuinely be a win-win agreement.