Ten Years On Project LIVE EVENT - Disciplinary Woes and Possibilities: Political Science in the Context of the Uprisings (27 April)

The Ten Years On Project Presents

Political Science in the Context of the Uprisings

This event is part of the
“Ten Years On: Mass Protests and Uprisings in the Arab World”
(TYO) Project

This panel explores how the example of the Arab uprisings can be brought to bear on the production of general knowledge in political science. Viewing the uprisings as complex, ongoing, and multifaceted processes of sociopolitical transformation already helps avoid the problems of teleology that have bedeviled a number of approaches to the study of politics—from modernization theory through the democratic transitions literature, from research on “political development” to studies of authoritarian resilience, from “political culture” to various forms of political economy research. Taking this rejection of teleology as a point of departure while at the same time embracing theories and voices from and about the Middle East, we ask: What kinds of conceptual, theoretical, and methodological tools might we develop to bridge the gap between mainstream political science and real-life events? What, framing the question more broadly, is the relation between theory and practice, and how can the uprisings illuminate that relation? What theories and methods central to political science are the most relevant or thought-provoking regarding the uprisings? Assuming a broader definition of politics is useful, how can it be operationalized in studying the Arab uprisings and their reverberations? What approaches, in particular, need to be revamped,  dismissed, or even outright rejected?

Nathan J. Brown, a professor of political science and international affairs at George Washington University, is a distinguished scholar and author of four well-received books on Arab politics. Brown brings his special expertise on Islamist movements, Palestinian politics, and Arab law and constitutionalism to the Endowment. Brown’s most recent book, Resuming Arab Palestine, presents research on Palestinian society and governance after the establishment of the Palestinian Authority.  His current work focuses on Islamist movements and their role in politics in the Arab world.

Laryssa Chomiak is the Director of the Centre d`Etudes Maghrébines à Tunis. She received her Ph.D. in political science in August of 2011, which was based on eighteen months of qualitative research in Tunisia and 6 months of comparative field work in Ukraine. She is currently finishing her book manuscript on the politics of dissent under Ben Ali`s Tunisia.  Her work has appeared as journal articles in Middle East Report and Middle East Law and Governance.

Amaney Jamal is the Edwards S. Sanford Professor of Politics at Princeton University and director of the Mamdouha S. Bobst Center for Peace and Justice. Jamal also directs the Workshop on Arab Political Development, and the Bobst-AUB Collaborative Initiative. She is the former President of the Association of Middle East Women’s Studies (AMEWS). The focus of her current research is on the drivers of political behavior in the Arab world, Muslim immigration to the US and Europe, and the effect of inequality and poverty  on political outcomes. Jamal’s books include: Barriers to Democracy (2007), which explores the role of civic associations in promoting democratic effects in the Arab world (winner of the 2008 APSA Best Book Award in comparative democratization). She is co-editor of Race and Arab Americans Before and After 9/11: From Invisible Citizens to Visible Subjects (2007) and Citizenship and Crisis: Arab Detroit after 9/11 (2009). Her most recent book, Of Empires and Citizens, was published by Princeton University Press (2012). Jamal is co-principal investigator of the Arab Barometer Project, winner of the Best Dataset in the Field of Comparative Politics (Lijphart/Przeworski/Verba Dataset Award 2010); co-PI of the Detroit Arab American Study, a sister survey to the Detroit Area Study; and senior advisor on the Pew Research Center projects focusing on Islam in America (2006) Global Islam (2010) and Islam in America (2017). Ph.D. University of Michigan. In 2005, Jamal was named a Carnegie Scholar.

Lama Mourad is an assistant professor at the Norman Paterson School of International Affairs at Carleton University.  Her research focuses on the intersection of forced migration, local governance, and the politics of borders, with a regional focus on the Middle East. Mourad was previously a postdoctoral fellow at Perry World House, University of Pennsylvania, and a SSHRC-postdoctoral fellow at Harvard University and University of Pennsylvania. She received her PhD from the Department of Political Science at the University of Toronto. In 2018-2019, she was a pre-doctoral fellow with the Middle East Initiative at Harvard Kennedy School of Government's Belfer Center for Science and International Affairs. Mourad’s work has been published in both academic and public outlets, including the Journal of Refugee Studies, Middle East Law and Governance, Forced Migration Studies, the European Journal of International Relations as well as The Atlantic, Lawfare, The Washington Post, The Toronto Star, and Le Devoir. To learn more about her research, please contact her at lama.mourad [at] carleton.ca, or find her on twitter.

Jillian Schwedler teaches political science at Hunter College. She is author of numerous books and articles, including the award-winning Faith in Moderation: Islamist Parties in Jordan and Yemen (Cambridge 2006) and co-editor (with Laleh Khalili) of Policing and Prisons in the Middle East (Columbia/Hurst 2010). She is former Chair of the Board of Directors and member of the Editorial Committee of Middle East Report. 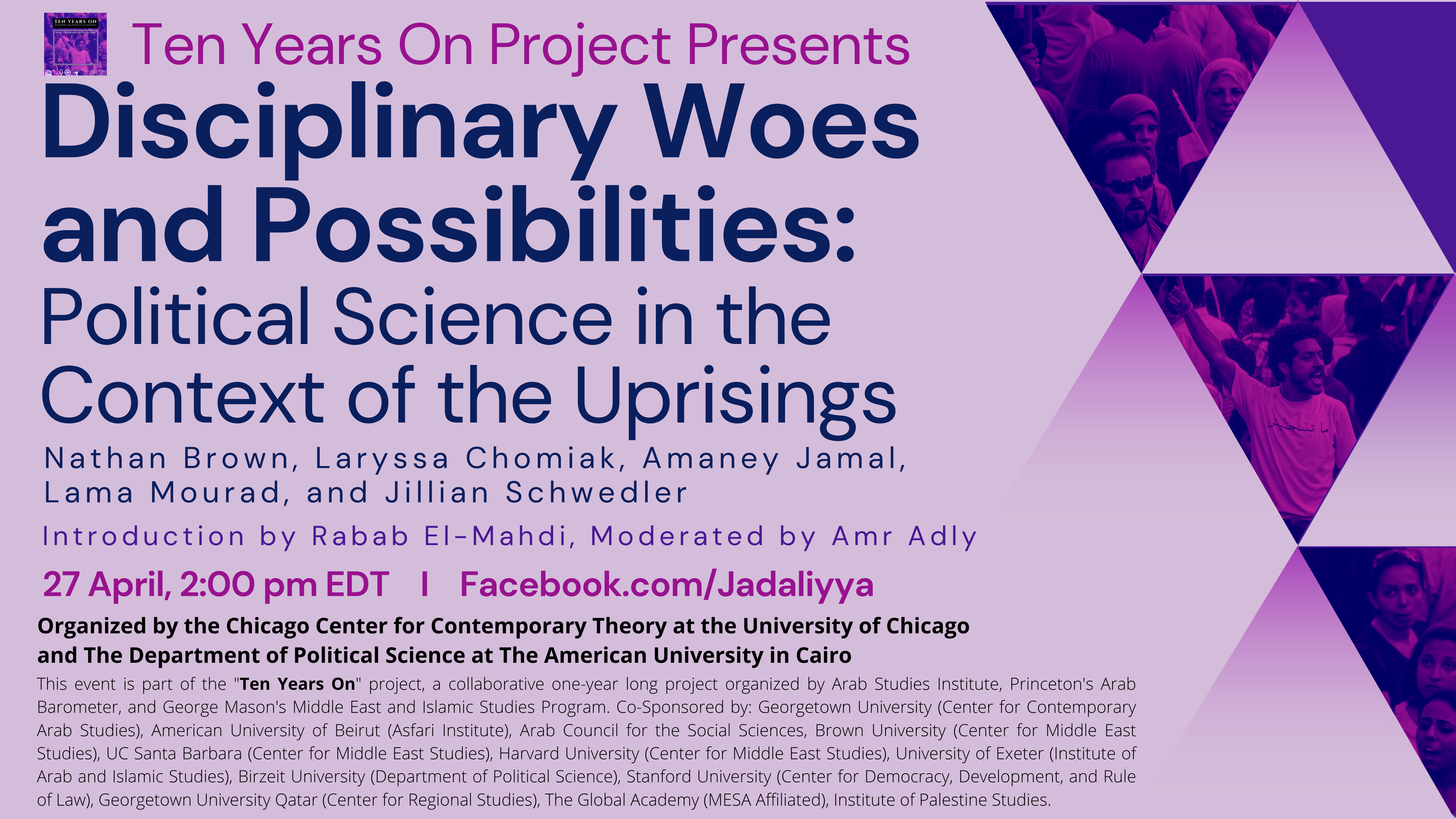