The widespread and exponential growth of COVID-19 in “advanced” countries compared to “developing” counties contradicts the conventional literature on social determinants of health (henceforth, SHD) such as income, life expectancy, the kind of health system, and prevailing governance, among others. This article quantitively explores the association between cases and deaths of COVID-19 and SHD; using available country-level data of the pandemic until 6 May 2020. It highlights two different narratives to explain the breakout of the pandemic in the “advanced” counties. The first one assumes there exist major shortcomings in the conventional analytical framework that led to a failure of capturing key determinants of health. The second one assumes that the SHD framework is still valid, thus it is merely a matter of time until we witness a second wave of COVID-19 which will hit mainly “developing” countries.

The conventional consensus in the literature on SDH refers to the role of wealth, living conditions, equality, inclusive and effective institutions, and social integration in better health outcomes; an efficient and just health system plays an intermediate role in preventing, protecting, and caring for the morbidity burden. (WHO, 2008) In the case of a pandemic, Lowcock et al. (2012) concluded that SDH (namely less education and poor material conditions) are key factors that were associated with severe pandemic H1N1 in 2009.[1] Bloom and Canning concluded that prosperous societies have better health during and better protection against epidemics. They suggested that the prevention of epidemics is possible through improving health systems by investing in necessary health infrastructure, having strong quarantine measures ready to be employed to prevent an incipient epidemic, and preparation for a comprehensive mobilization of actors and resources to counter the epidemic consequences. However, they highlighted a key political obstacle in the form of politics, as politicians “are often influenced by short-term political considerations, causing them to pay too little heed to important longer-term realities.” (Bloom and Canning, 2006)

Furthermore, Madhav and others pointed to the progress that has been made on the international level to anticipate the consequences of future pandemics based on the lessons learned from the 2003 severe acute respiratory syndrome (SARS) pandemic and avian influenza. A concerted international effort was made to update International Health Regulations (IHR) to enhance the coordinated global response to epidemics, with attention paid to highlighting the vulnerability of many developing countries in sub-Saharan Africa, Asia, and Latin America in particular in terms of pandemic preparedness. They also highlighted the increasing probability of pandemics occurring due to the expansion of global connectedness and environmental degradation during the last century. (Madhav et al., 2018)

In 2019, a Global Health Security Index (GHS Index) was developed by the Nuclear Threat Initiative, John Hopkins University, and The Economist. The index consists of six pillars: prevention, detection and reporting, rapid response, health system, compliance with international norms, and risk environment. The GHS Index assesses the capacity of countries towards health insecurity. However, Figures 1a & 1b show an association between the higher score in GHSI and higher confirmed COVID-19 cases and deaths, which raises questions about the validity of using a conventional framework to relay data on health insecurities and/or the reliability and transparency of data reported by countries and international agencies. 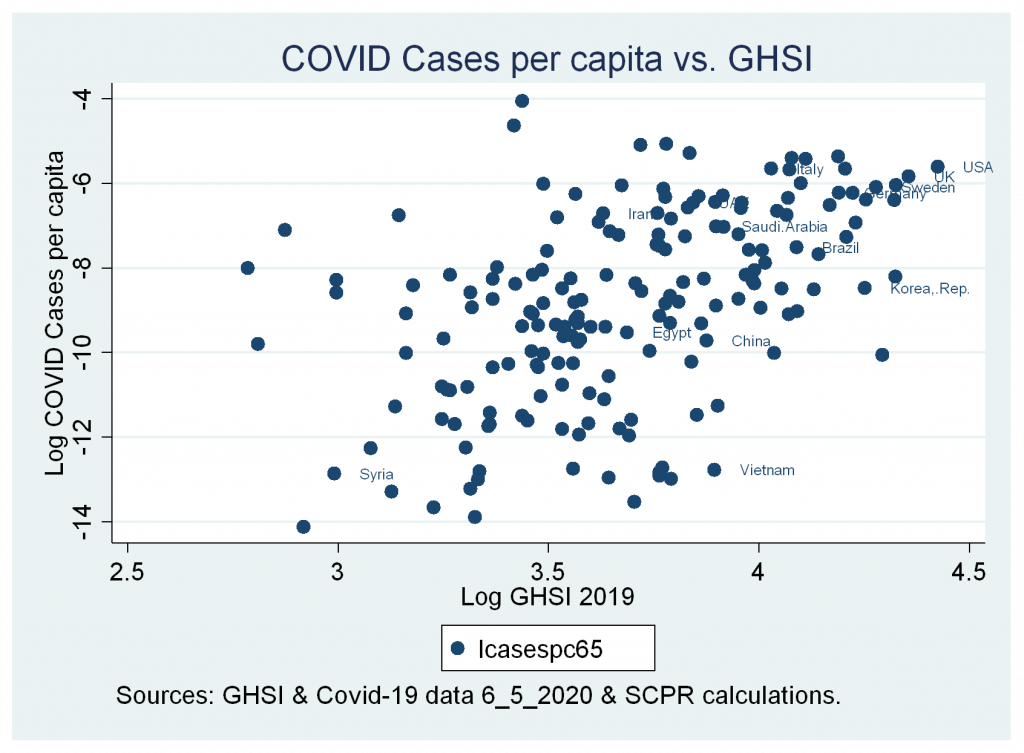 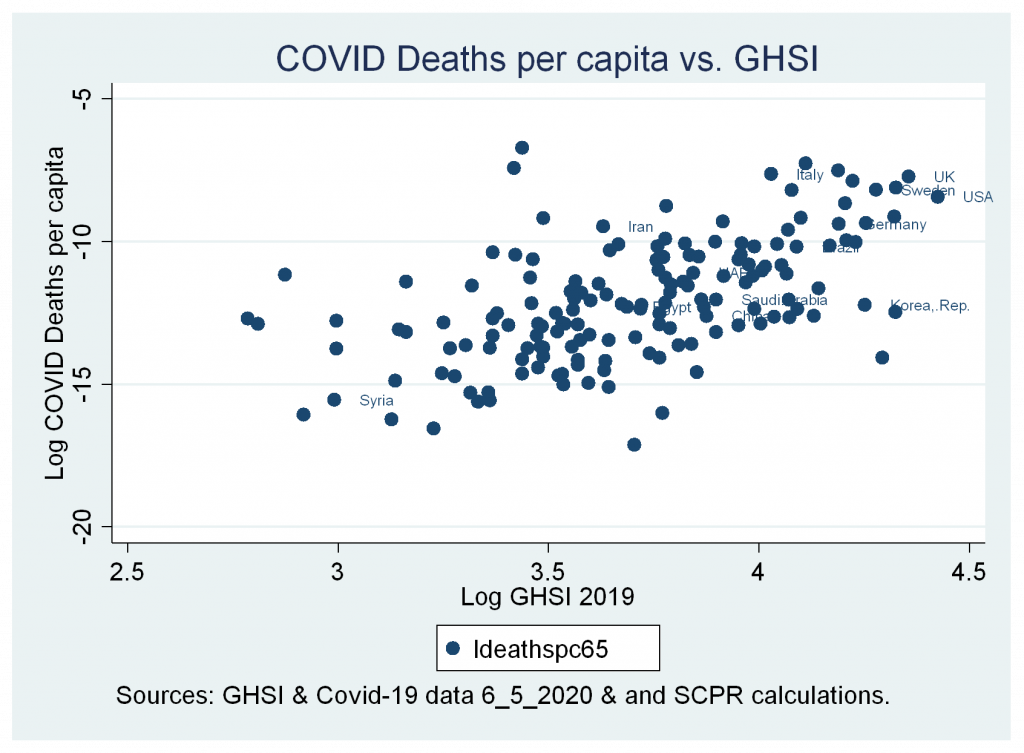 Moreover, COVID-19 causes further damage to SDH, including but not limited to damage to the health system, deterioration of economic performance, degradation of social relations, and political disruptions (Madhav et al., 2018). Therefore, based on the conventional literature and given that it is a valid framework to capture SDH, the countries and communities with poor initial SDH will be the most vulnerable to pandemics, less able to mitigate its impacts, and witness further deteriorations in its SDH which make it severely vulnerable to future similar crises. However, global responses and interventions can break this chain through external support in ways that mitigate countries’ vulnerabilities, as can be seen through the efforts of UN agencies, states, and global civil society, among others.

The Syrian Center for Policy Research (SCPR) conducted a preliminary assessment of the COVID-19 country-level SDH determinants from 3 April 2020 to 6 May 2020, which adds a challenging narrative to the conventional understanding of determinants of health. The first cross-country regression was conducted between the COVID-19 confirmed cases per capita as the dependent variable and potential explanatory variables. This was measured as an average for the period of 2015-2018 and included GDP per capita, life expectancy at birth, net primary education enrollment, the median age of the population, public health expenditure, universal health coverage, and military expenditure, in addition to the good governance indices such as control of corruption, voice and accountability, and stability. The second regression was conducted using the COVID-19 death cases per capita as a dependent variable. SCPR repeated the same exercise for the number of cases and deaths as on 3 April 2020, 6 May 2020, and the cases and deaths between those two dates. 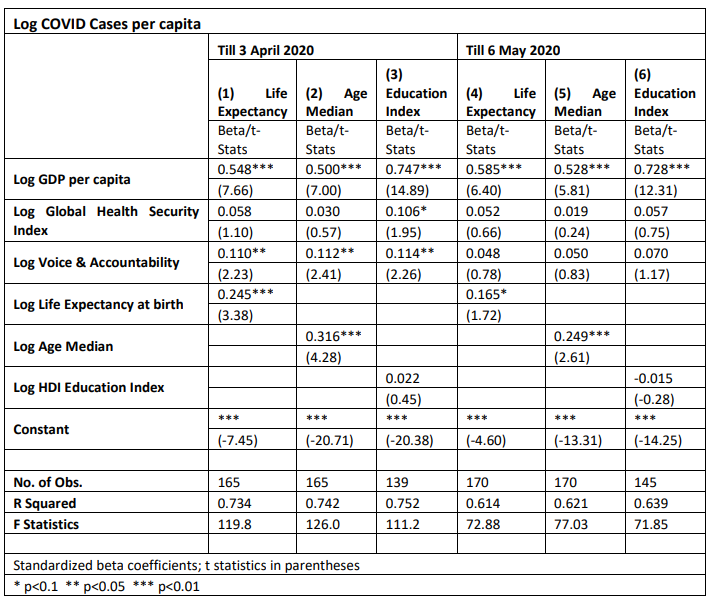 As such, the COVID-19 direct impact in terms of confirmed cases and deaths per capita continued, in the second period, its association with higher income, better governance performance, higher life expectancy, and older population. These results strikingly contradict the conventional literature of social health determinants, which urge for global efforts to rethink the theoretical and policy frameworks that have been used recently. 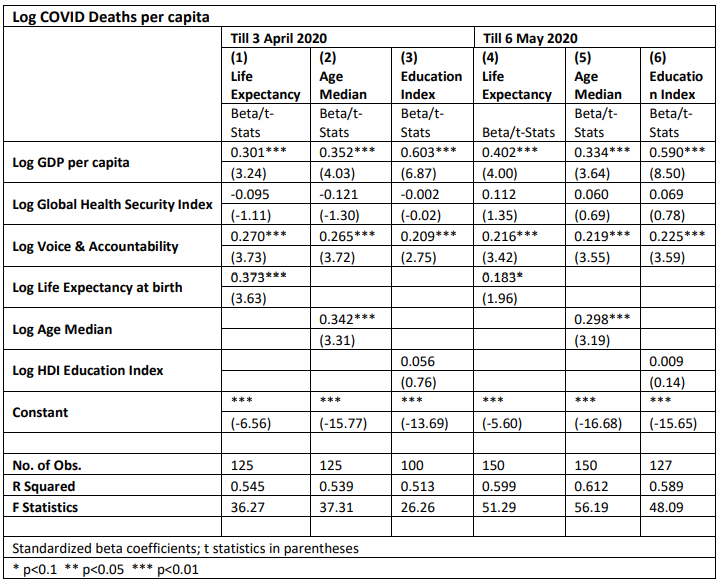 In theory, the rich countries with better health systems, universal health coverage (UHC), public health indicators, economy, and governance should be less affected by the pandemic as an exogenous factor and more capable of containing and mitigating the virus' impact. However, the comparison between the results of 3 April 2020 and 6 May 2020 shows that the association is still significant and strong between “better” structural determinants and worse COVID-19 direct impact in terms of confirmed cases and deaths per capita.

The straightforward explanation is to consider the ongoing phenomena as the first wave of the pandemic, and that the second wave will hit developing or poorer countries in terms of income, life expectancy, health system, governance, and so forth. As such, all trends that we have explored so far will be reversed in the second wave; at that point, it would be in line with the conventional determinants of health. Therefore, the current catastrophic direct impact of the pandemic will surge exponentially. Additionally, the massive political and socioeconomic impacts of the pandemic have already deteriorated the SDH in the “poorer” countries due to the externalities of the global deteriorations, and the precautionary measures that have been adopted by countries which harmed internal socioeconomic conditions. As a result, the vulnerable countries to the pandemics have become weaker. Nevertheless, there are two factors that can prevent the second wave. In this narrative, the first is the spillover of policy interventions implemented by countries like China, Italy, and the US, among others; these experiential accumulations will benefit the least affected countries so far, even though the spillovers have not downturned the rise of COVID-19 at the global level. The second factor is the invention of a successful vaccine that can save lives in poorer or less developed countries, if this vaccine would be distributed globally for all.

The potential second explanation is more challenging in that the conventional framework that identifies the structural foundations of the health system, public health outcomes, sustainable development, and prosperity has serious pitfalls.

This brief is highlighting some of the potential pitfalls that need further investigation. First, there is a lack of capturing inequalities and deprivations between and within countries. The novel approach (Piketty, 2013) showcases the rising inequality in the last three decades present in rich countries, while the conventional indicators such as the Millennium Development Goals (MDGs), Gini coefficient, and poverty measures did not capture it. This shortage is related to bypassing analyses of these countries' political economy, which explains the rising political and economic elite who increasingly control profitable sectors and push most of the employees into an informal economy with poor work conditions.

Second, the reductionist definition of good governance, as most of the global governance measurements such as World Governance Indicators (WGI), Bertelsmann Transformation Index (BTI), and Polity concentrate on the forms of institutions rather than the function of the institution, has also mixed the good governance with market-oriented institutions. For instance, more deregulation in legislation contributed to higher scores—even if these laws benefited the political and economic elite at the expense of the majority of the population. The global financial crisis of 2008-2009 did not change the prevailing governance paradigm. Third, the shrinking role of actors providing public goods, including the public sector and civil society, in many indicators transformed this provision to be market-oriented and assessed it to be a positive indicator of greater “efficiency.” Fourth, there is a lack of capturing social capital, as most of the development frameworks deal with the social and cultural sides of health, education, and social protection lenses; the social networks, shared values, trust, and solidarity are almost entirely absent from these frameworks. Finally, there is a lack of comprehensive indicators for environmental degradations, including overuse, overconsumption, and squandering of resources and widespread pollution.

These potential gaps in capturing the “full” SDH reflect a structural distortion in the global development framework that appears in the divergence between the de jure and de facto goals and mechanisms. In this regard, the de jure global development addressed inequalities, sustainable environment, social security, and human security as in SDGs. However, these normative goals have not translated into policies and interventions that fulfill the declared end. The de facto policies that are still dominating, even within most UN agencies, and are characterized to a large extent by unaccountable global political powers and crony capitalism that prioritize macroeconomic stabilization, higher economic growth, consumption, competition, informality and deregulations, marketization of security, research, public services, and even humanitarian assistance, as well as increasing identity politics, populism, individualism, fragmentation, and fanaticism, all of which fail to restrict military industry and trade that fuel conflicts and violations of human rights.

Both narratives mentioned in this brief indicate alarming signals that the current development pathways for rich and poor, developed and developing countries, need to be revisited from the global public goods lens. Most of the current responses by key actors, including UN agencies, governments, and civil society, are reactive, such as providing health equipment, loans, and exemptions for business and humanitarian support among others. These efforts are very important; however, they take for granted the conventional understating of health determinants and the current policy design and implementations. In this regard, critical reviews and further efforts to shift the current paradigm are urgently needed.

The COVID-19 pandemic is an opportunity for developing an analytical framework that counters the tangible and intangible degradations that have mounted due to the current structure of power, mode of governance, and market-oriented policies and interests.

Global solidarity in this regard needs to aim for the transformation of global and national institutions and the creation of consistent policies that led to genuinely just, sustainable, and inclusive development. It is also crucial to prepare for the second wave of COVID-19 that could severely affect poorer countries and, more importantly, prepare for other worse endemic scenarios that could occur in the future due to environmental degradation, armed conflicts, or social fragmentation.

a. A strong positive correlation between cases and deaths variables and median age of population. 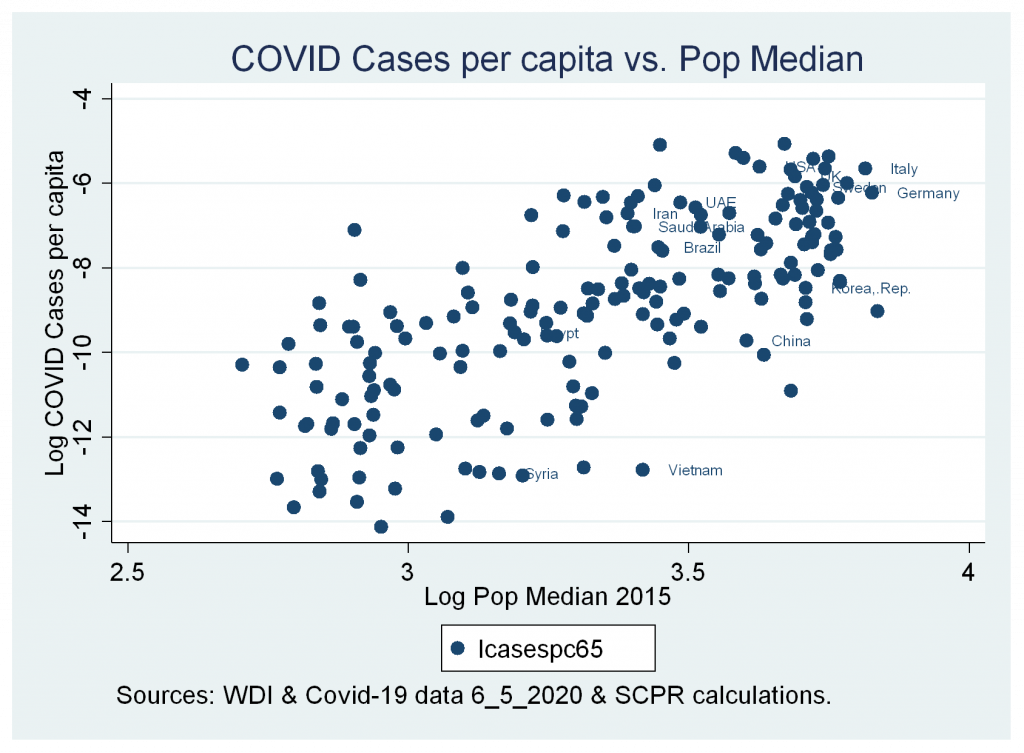 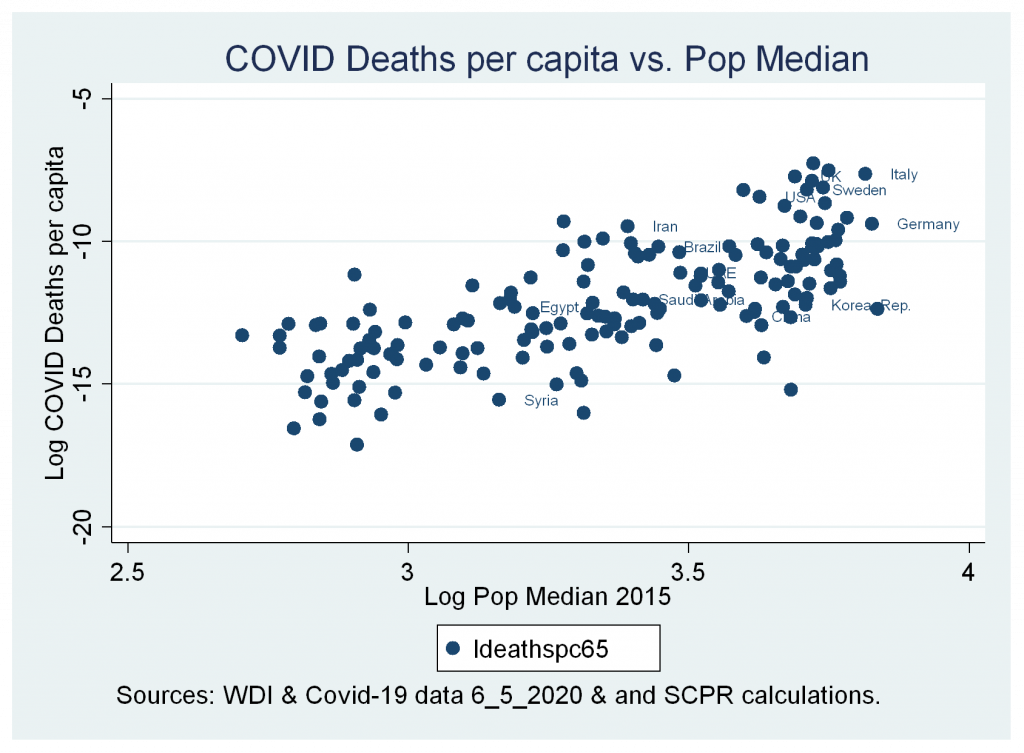 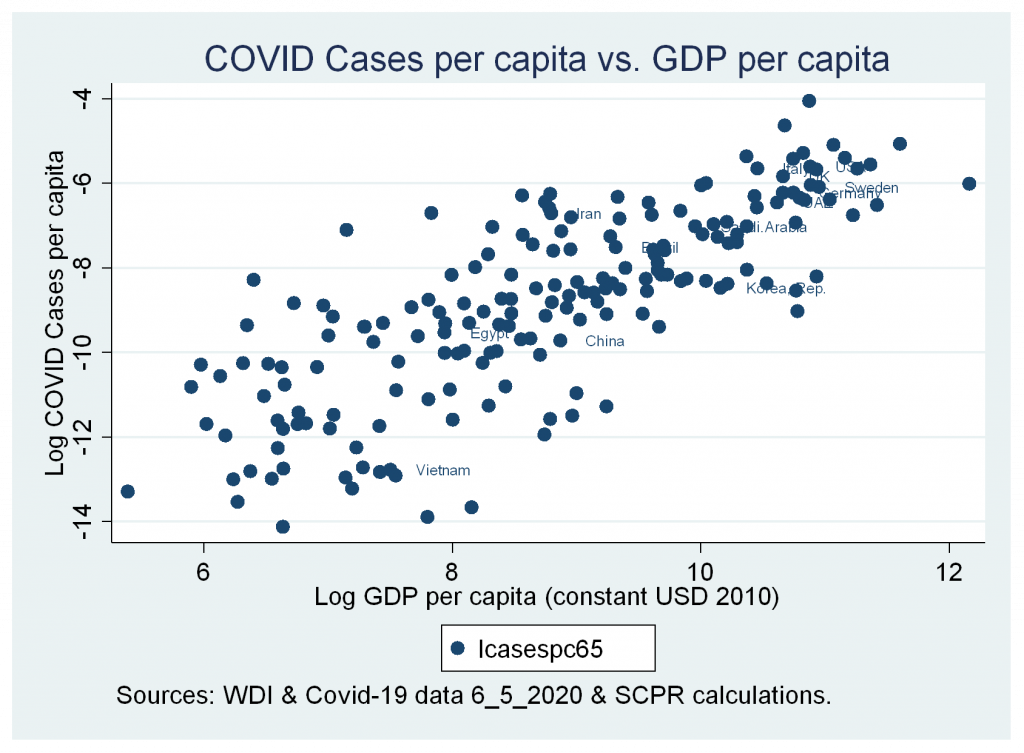 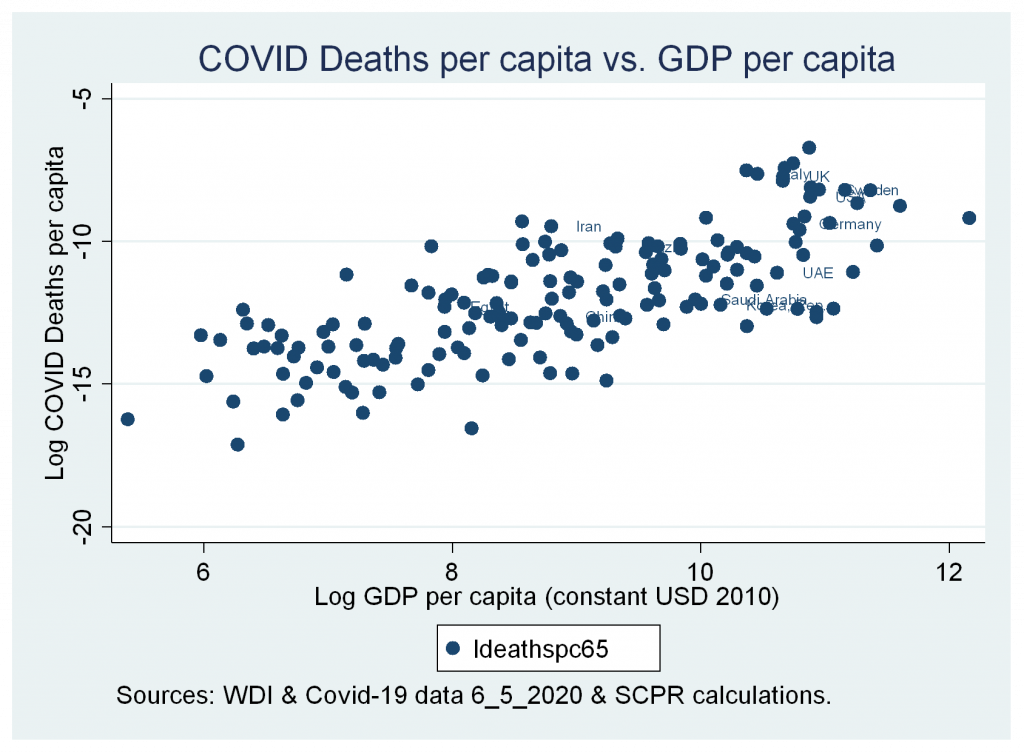 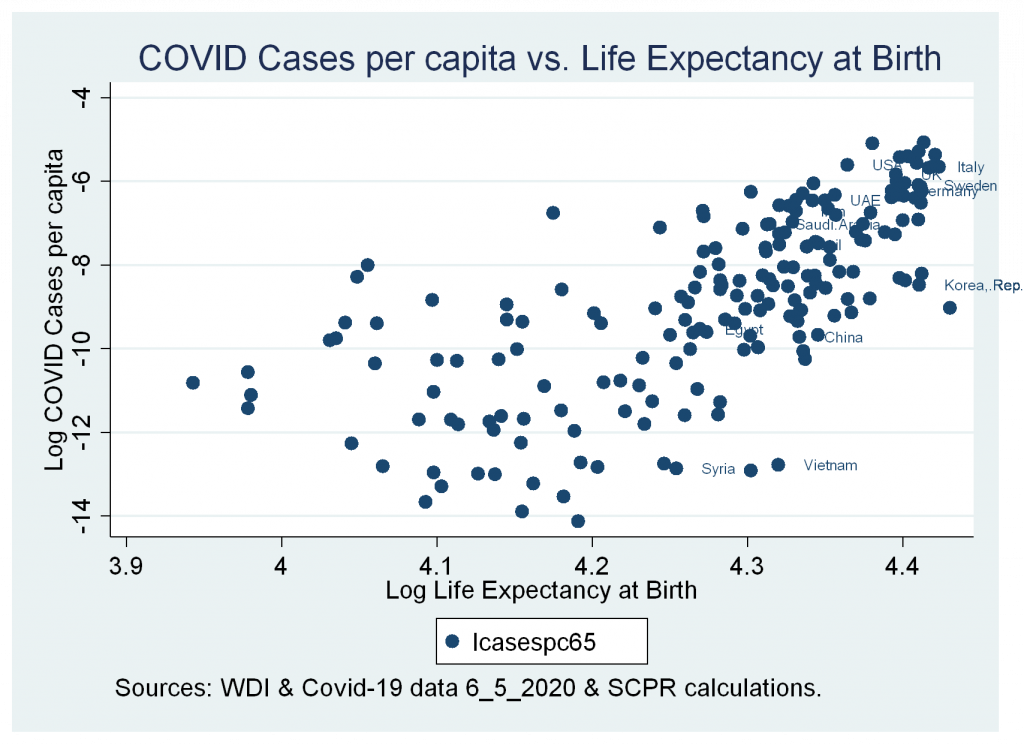 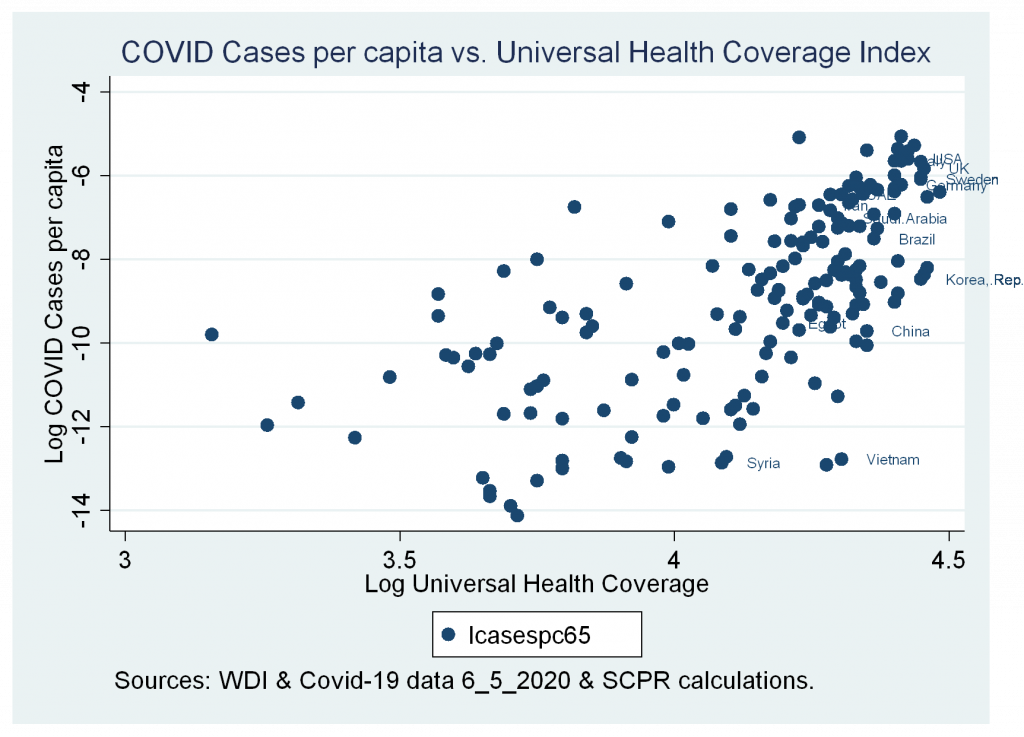 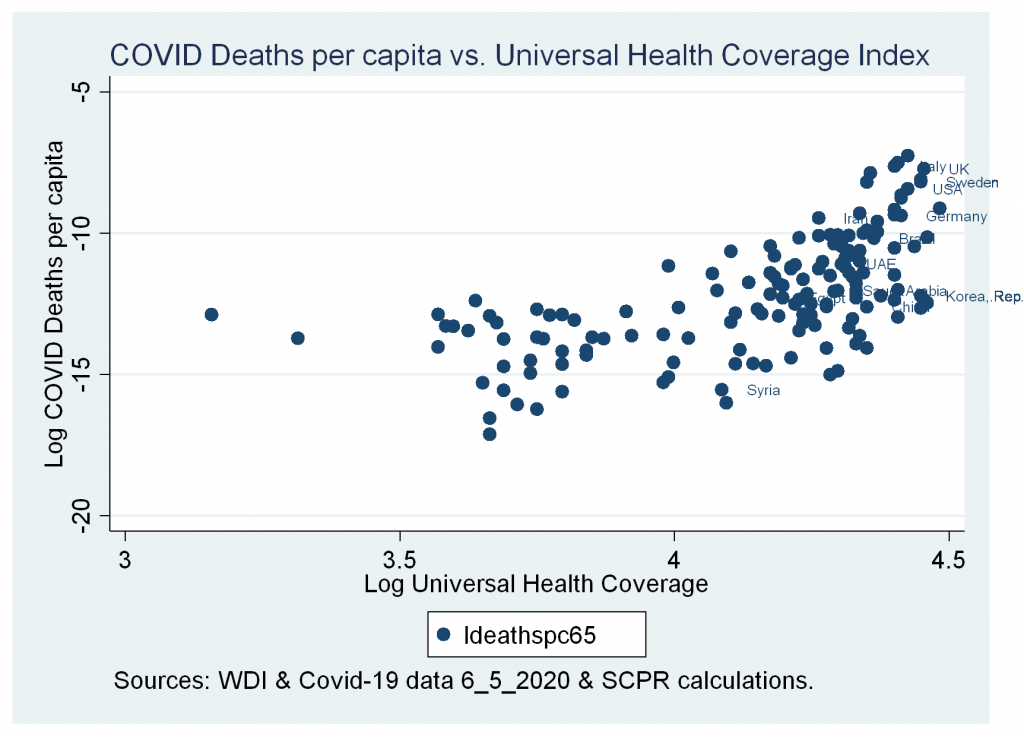 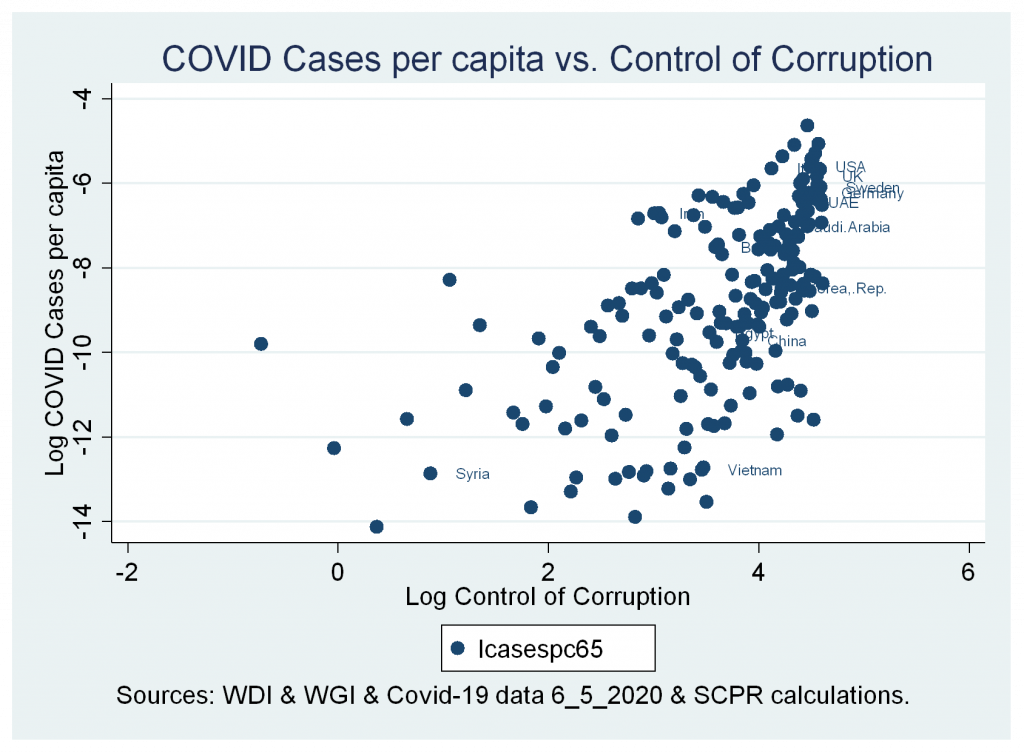 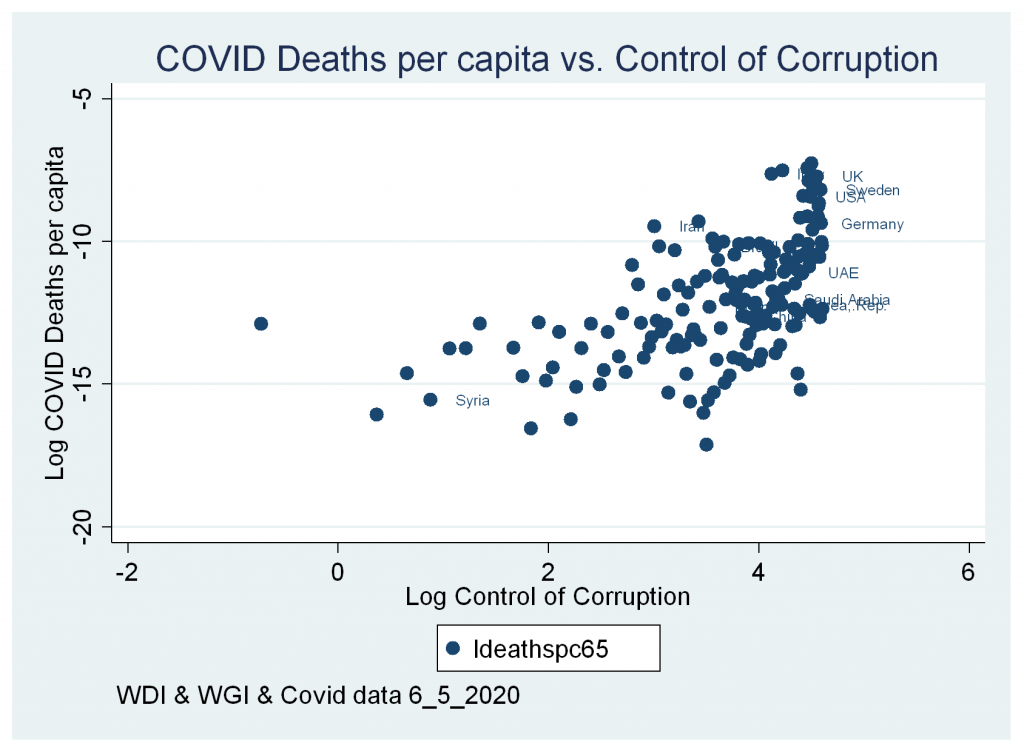 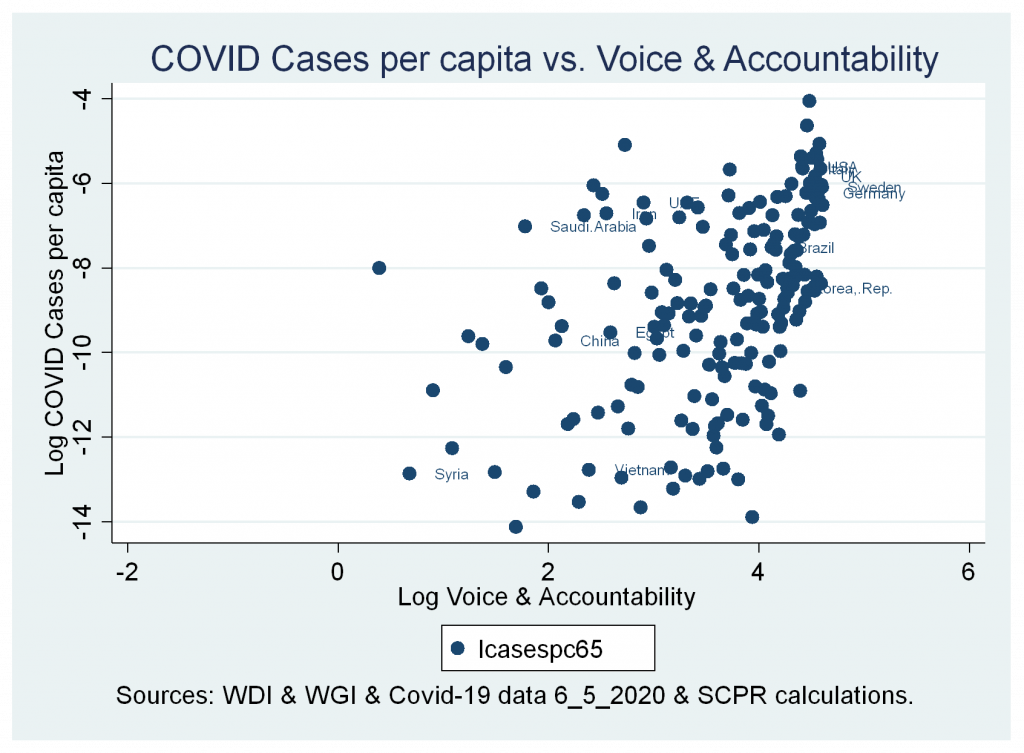 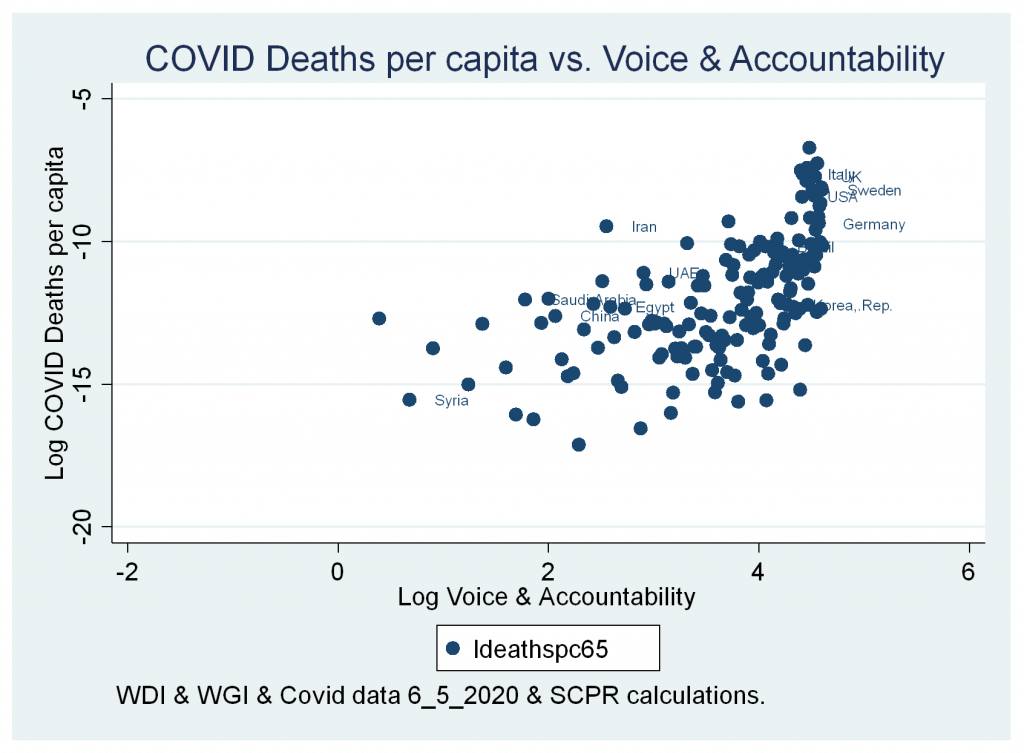 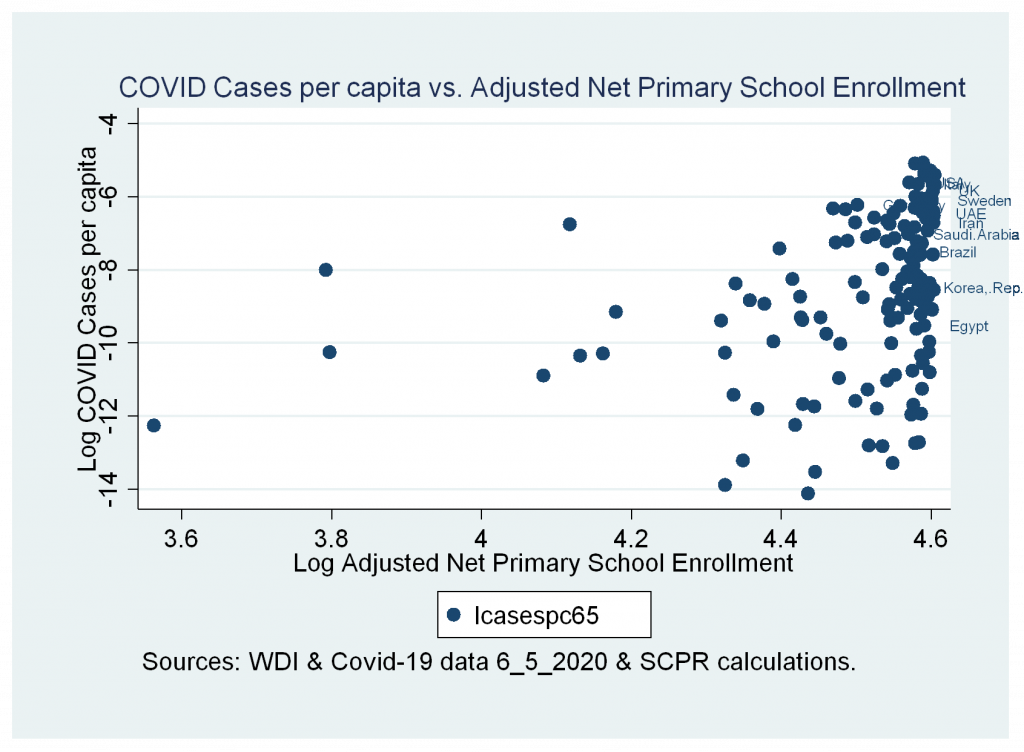 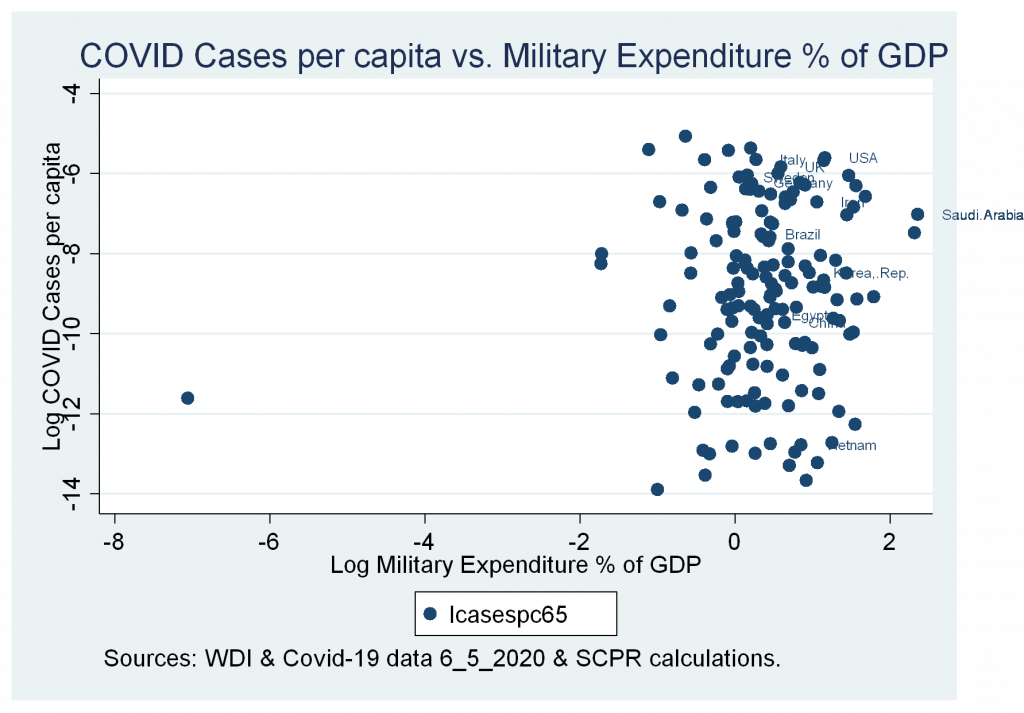 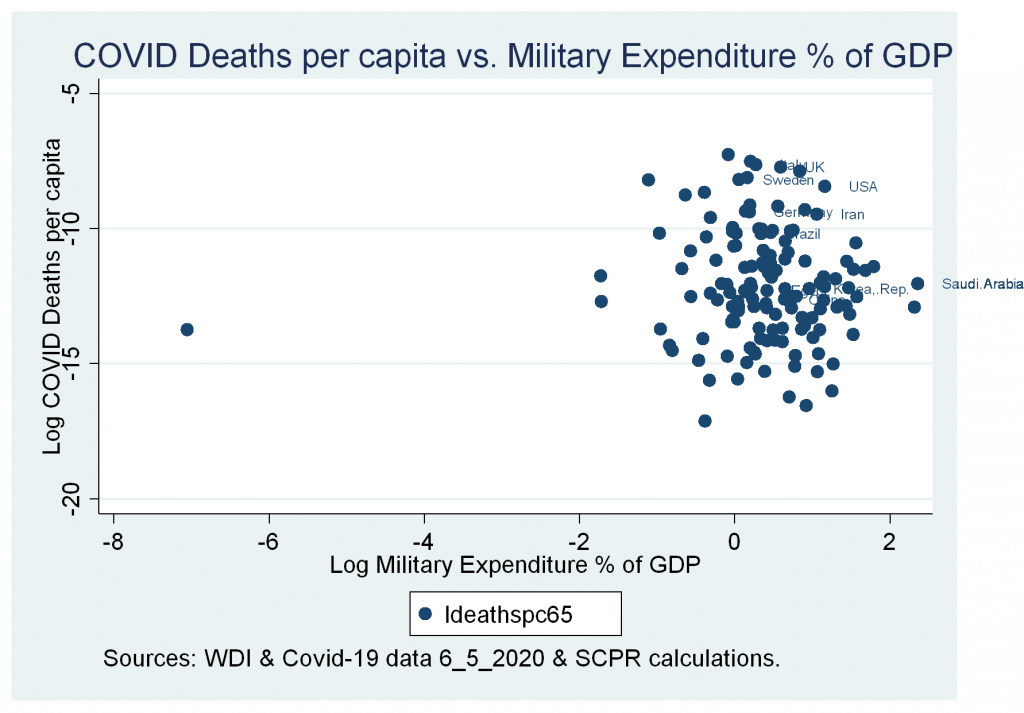 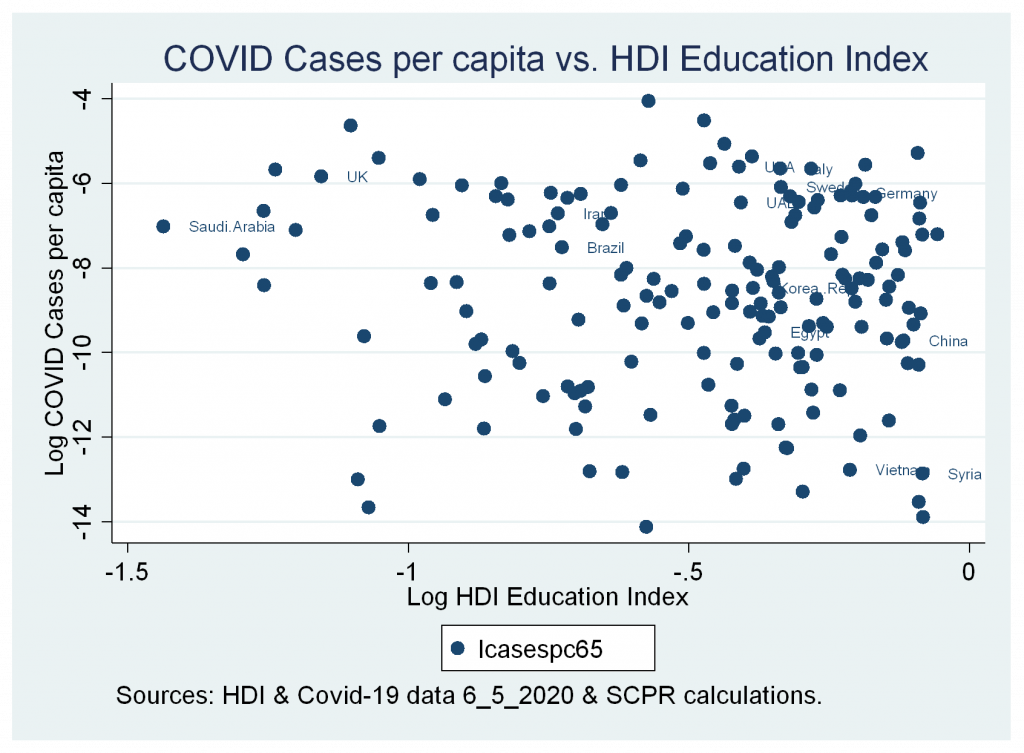 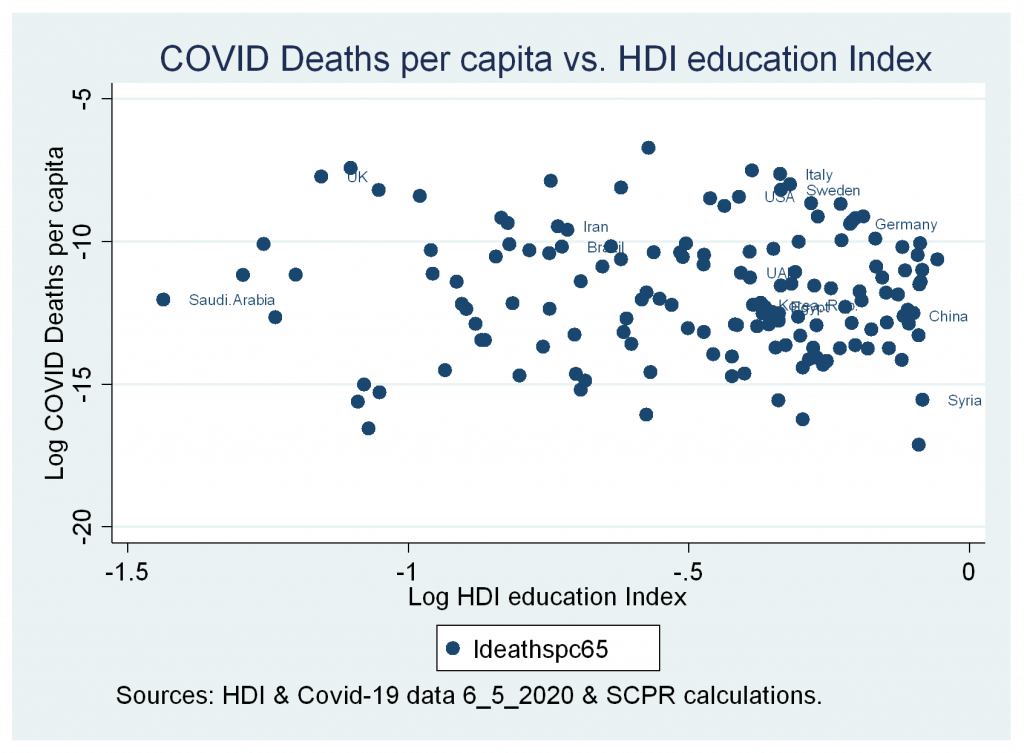