Amazigh Film in Algeria: Deterritorialization of a National Cinema

Amazigh territory stretches across North African national borders and is not a nationality but a symbolic regional identity in many countries. Film in this region works as a nationalizing force that transcends borders.

When we talk about Amazigh film, the distinction between Amazigh film in Morocco and in Algeria comes into play. The phrasing must be precise: It is not about Moroccan or Algerian Amazigh film, but about Amazigh film in Morocco or Algeria. The arena of Tamazgha film (Berberity, according to European terminology) covers a territory that stretches from the Siwa desert in Egypt to the Canary Islands in the Atlantic Ocean, all along the Mediterranean coast and the Saharan Sahel. Amazigh cinema exists everywhere that Amazigh populations exist, as soon as a movie is produced in this language. 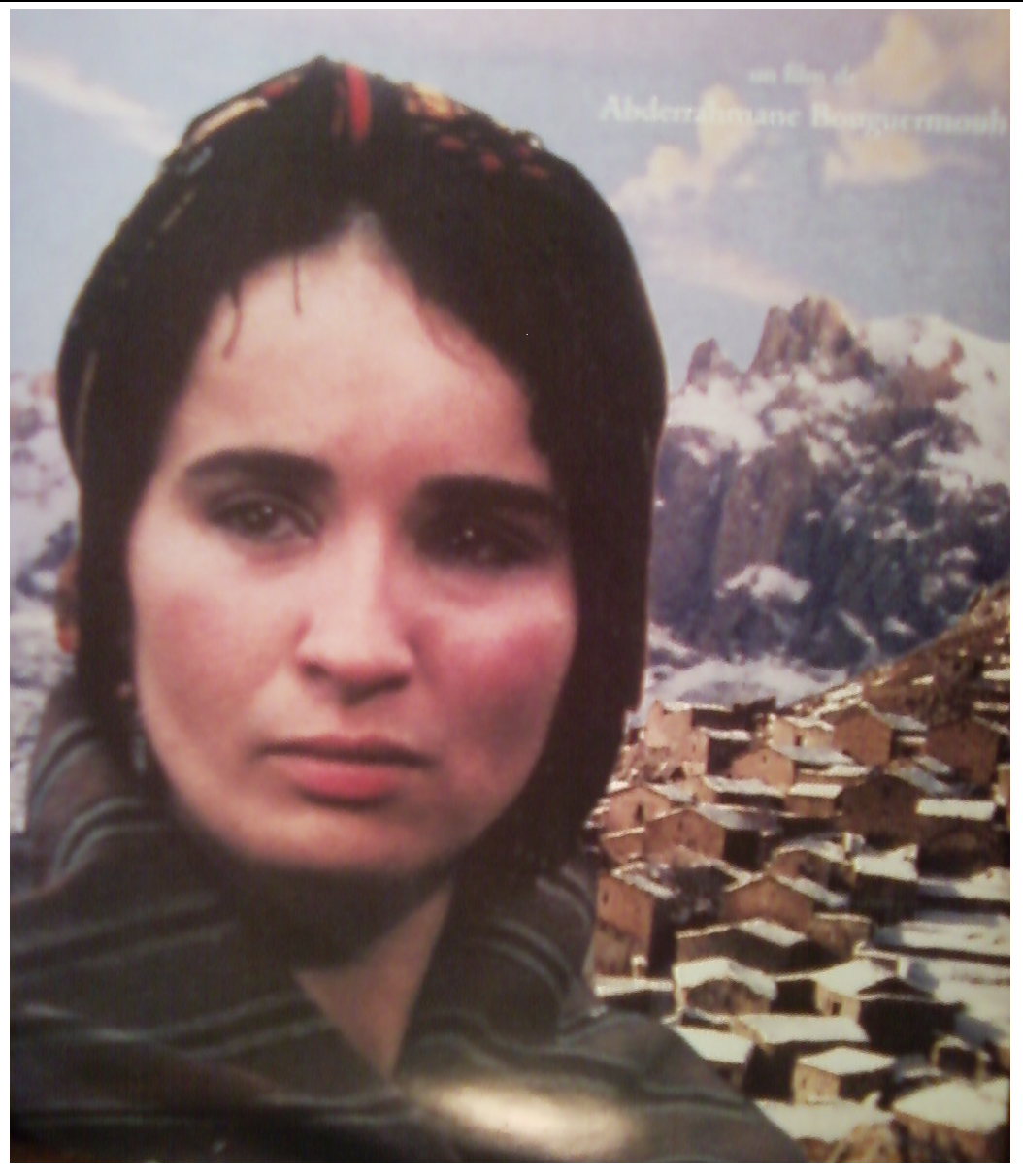 Djamila Amzal in The Forgotten Hill

Amazigh film crosses borders while exhibiting the shared characteristics, identity, and emblem of the Berber people. Its cultural touchstones include the 20th of April, the symbolic date on which the Berber identity was recognized, the Amazigh Z, and the three raised fingers (instead of the V) to symbolize victory. It is in this political and cultural context that a film industry developed in Morocco and Algeria, taking on various forms and exploring different themes. Its means of production differed from territory to territory, depending on cultural production, but it functioned as a nationalizing force.

Amazigh film, born almost at the same time in both Algeria and Morocco, emerged in the former when the state released its monopoly and permitted the establishment of a private production sector in 1991. Amazigh film came into being thanks to the financial contribution of the state, and the authorizations it granted (for screenplay, filming). Amazigh film lives under the broader umbrella of the Algerian national film, but holds its own identity, which transcends the borders of the country. 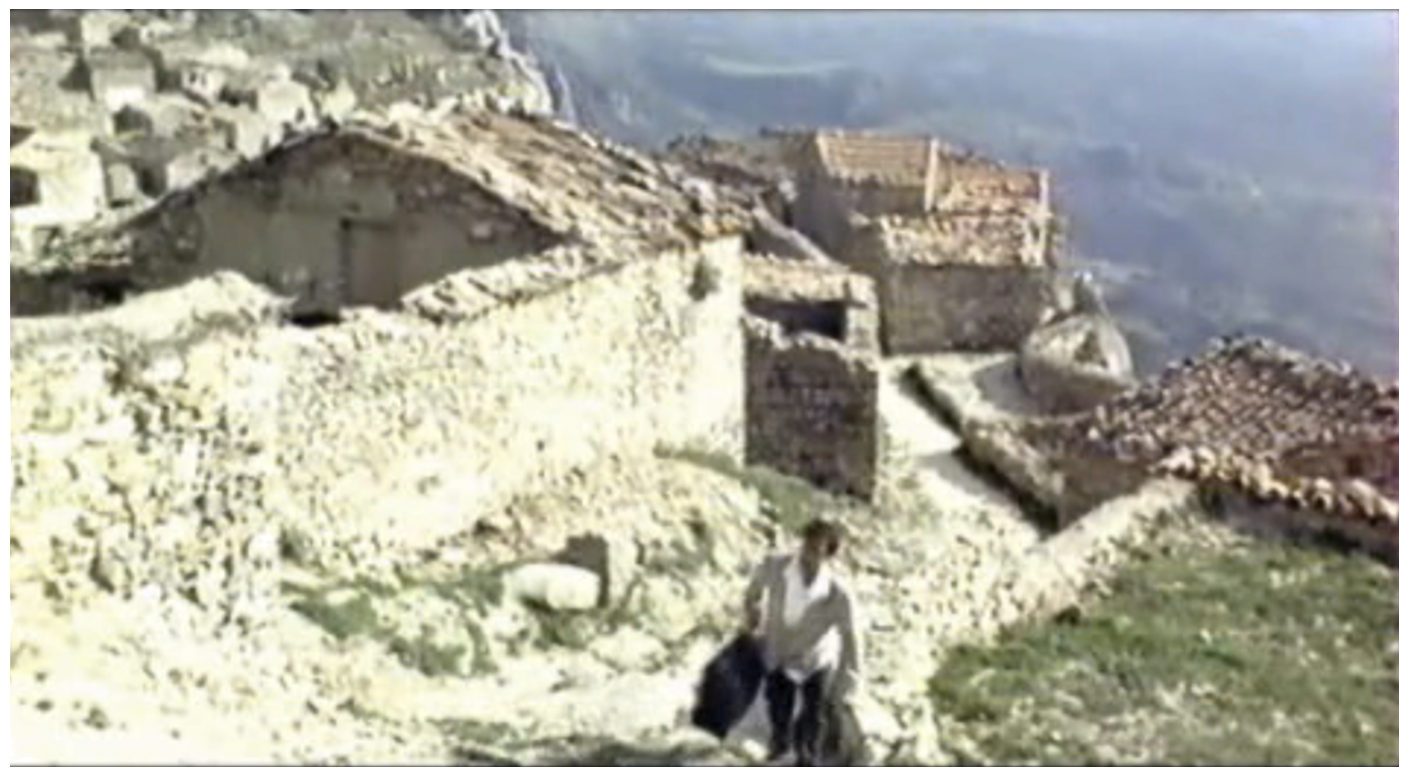 Ascending to the village of Tasga

Amazigh film is an arena full of contradictions since, on the one hand, it acts as a category of film, and on the other hand, it is a part of the Algerian film and often evokes that national identity. In the latter description, Amazigh film assumes the role of national art, and not a style. Sometimes this category is called a “cinematographic genre,” which ignores the conventional definition of a “genre” as it applies to film. For example, in the same way that Expressionism, Neorealism, and Nouvelle vague respectively carry the implication of German, Italian and French film, in Amazigh film, the home country is not a style but a marker of nationality. 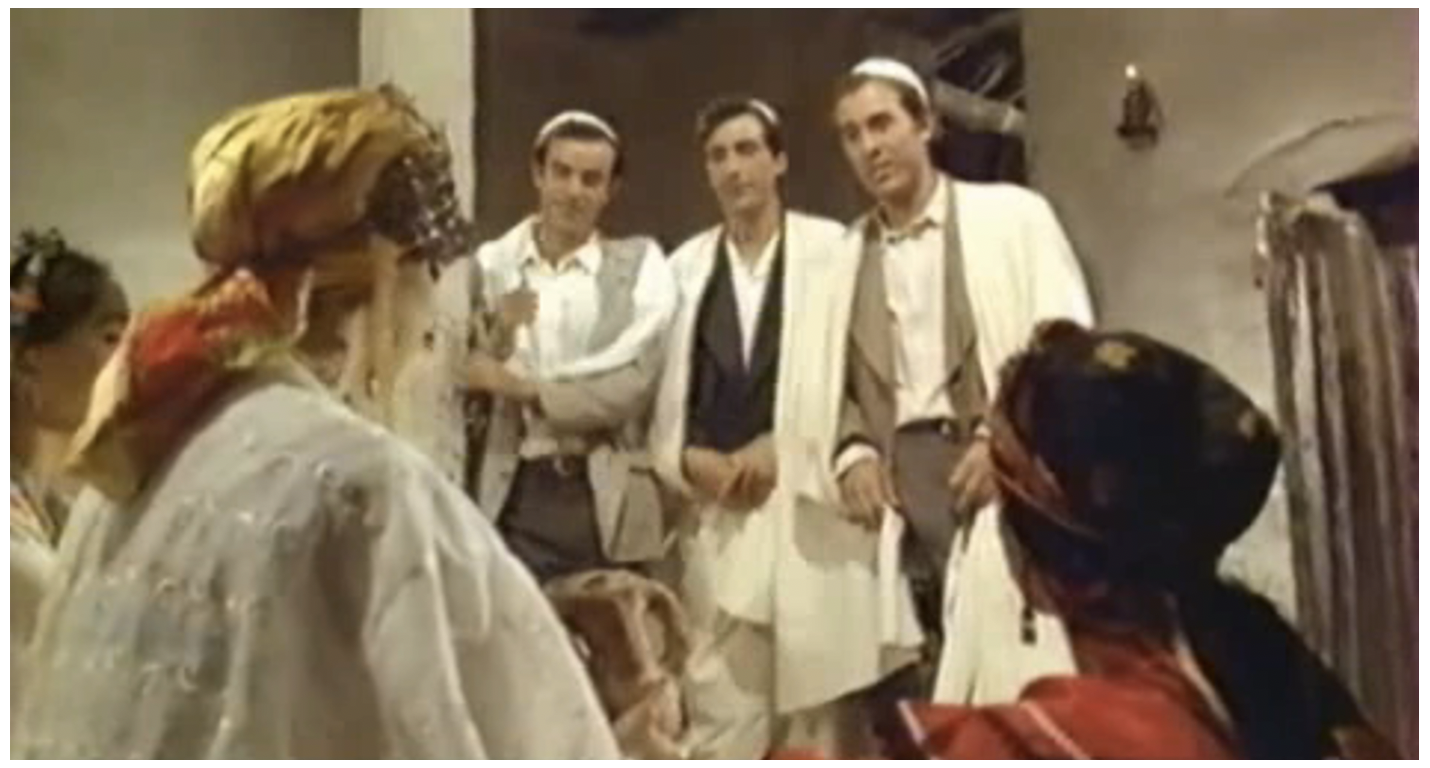 The national films constitute the social, political, and cultural landscape, which was formerly unified by the exclusive use of the Arabic language. The exclusion of Tamazight was axiomatic, as is evidenced by the destruction of Abderrahmane Bouguermouh’s first movie, Like a Soul, in 1965, the only existing copy of which was destroyed as soon as post-production was over.

Amazigh film, born a decade after the Berber Spring of April 1980 (which spotlighted the movement to recognize Tamazight), resulted from the struggle of a few Algerian filmmakers. Amazigh film has transcended the nation’s borders to link itself culturally, historically, and symbolically to the North African territory. 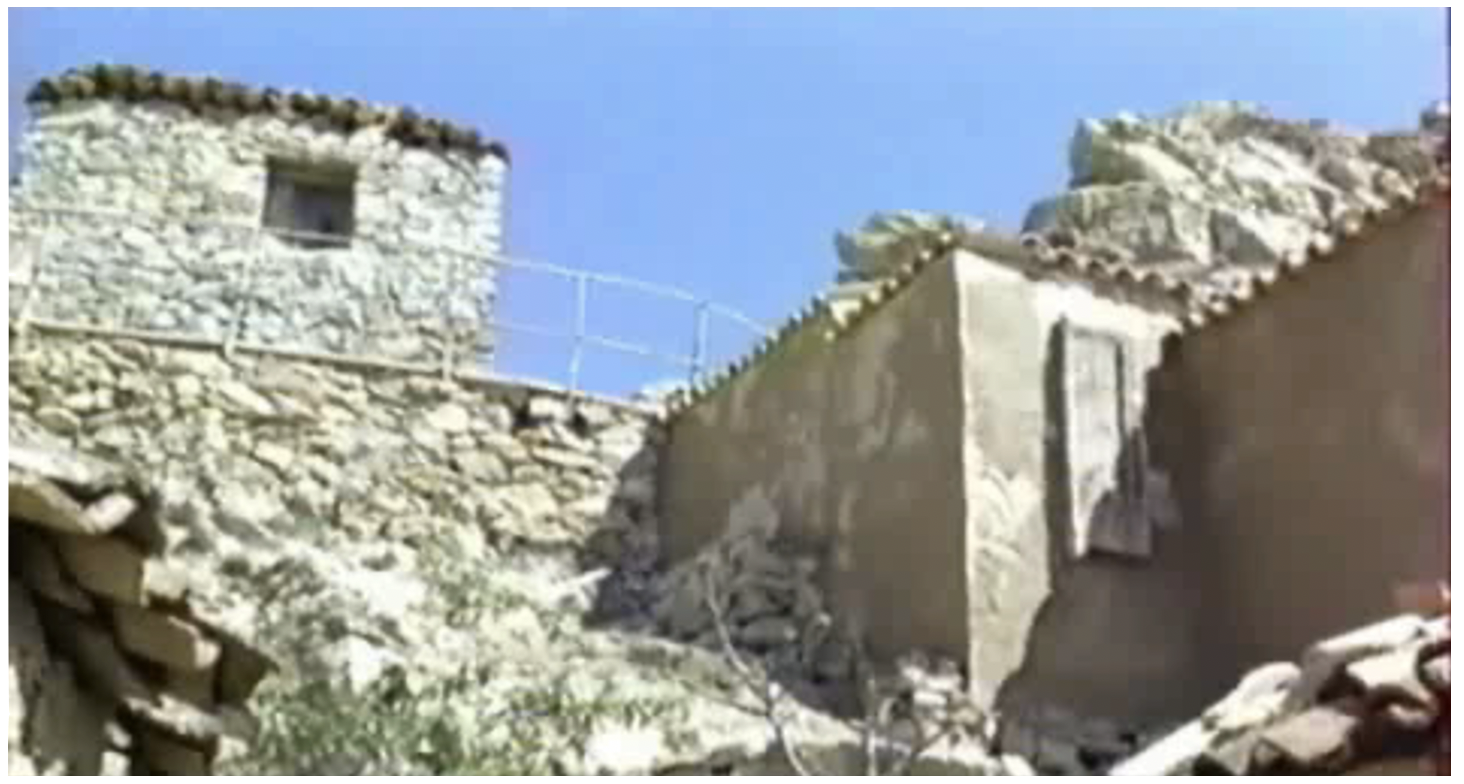 Ta'ssāst or security: the highest point in the village

Articles published in Europe about Algerian Amazigh movies categorize this, explicitly or implicitly, as Arab film. This is now a purely political category that includes Berber film, although it was born out of a desire to affirm its non-Arabness and link itself to the Africanity it lost in the borderless cluster called the “Arab bloc.”

Since the late 1990s, Amazigh film in Algeria has suffered a twofold divide between its three founding movies and those that followed. The first divide is that early Amazigh films were all rooted in the region of Kabylia, North-East of the capital, and thus represented other Amazigh communities only on a symbolic level. It is only on the grounds of deterritorialization that they are representative of Amazigh culture; for instance, the Mediterranean culture of Kabylia differs vastly from the more African culture of the Tuaregs in the Hoggar. 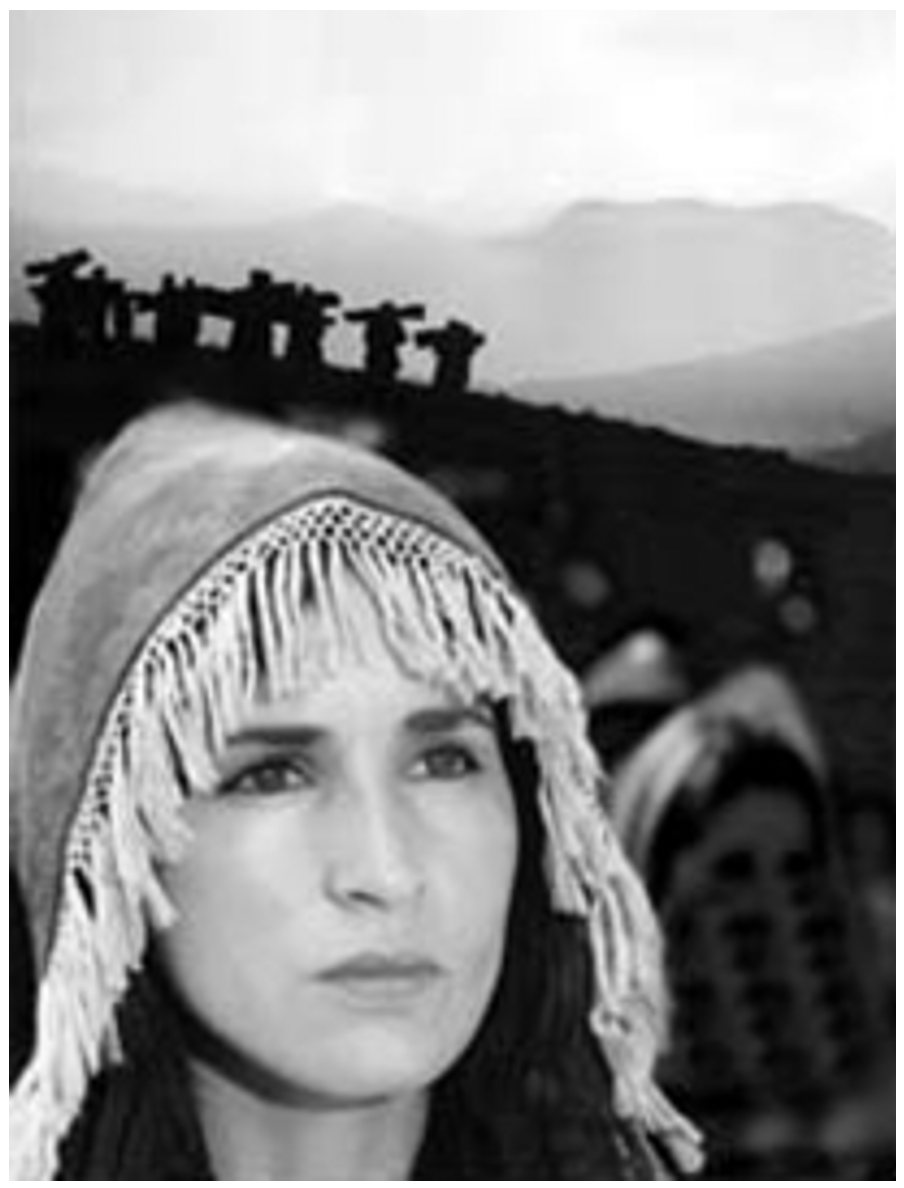 The second divide, internal this time, is related to the first three movies: The Forgotten Hill ([La colline oubliée]) by Abderrahmane Bouguermouh (1994) (which existed as a project since 1958, though the Kabyle version of the screenplay submitted in 1969 remained untouched because Tamazight was still unrecognized); Machaho by Belkacem Hadjadj (1995) and Baya’s Mountain (La Montagne de Baya) by Azzedine Meddour (1997), to which we could add The End of Djins (La fin des djins (1991) by Cherif Aggoune. These movies were pushed forward by popular momentum, which actively sought to make their production possible (by financial donations, prop and costume donations, approval of filming locations…) with the goal of putting Amazigh culture and language on screen, warding off fears that this culture will disappear as Algeria undergoes its most violent decade after independence. 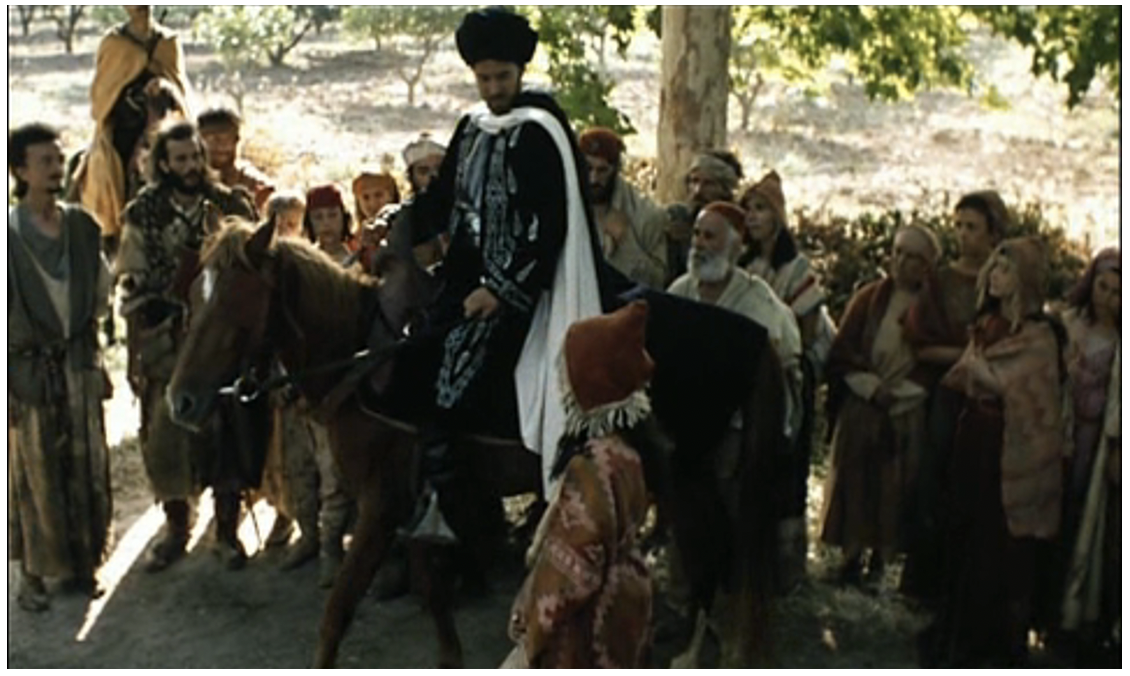 When the movies made it to the big screen, the Amazigh language was finally admitted into Algerian film. The movies that followed were produced in a fashion similar to other Algerian movies, the difference being that they were in Tamazight.

Another distinction has loomed since the birth of Amazigh film. There are those, like Azzedine Meddour, who speak of an Amazigh film different from the rest of Algerian cinema because of the singular way it represents Berber identity. There are those, like Belkacem Hadjadj, who speak of a film of Amazigh expression which implies a film that falls within the realm of Algerian film as a whole, but is culturally Amazigh regardless of its language. Meddour and Hadjadj’s films reflect their respective opinions. 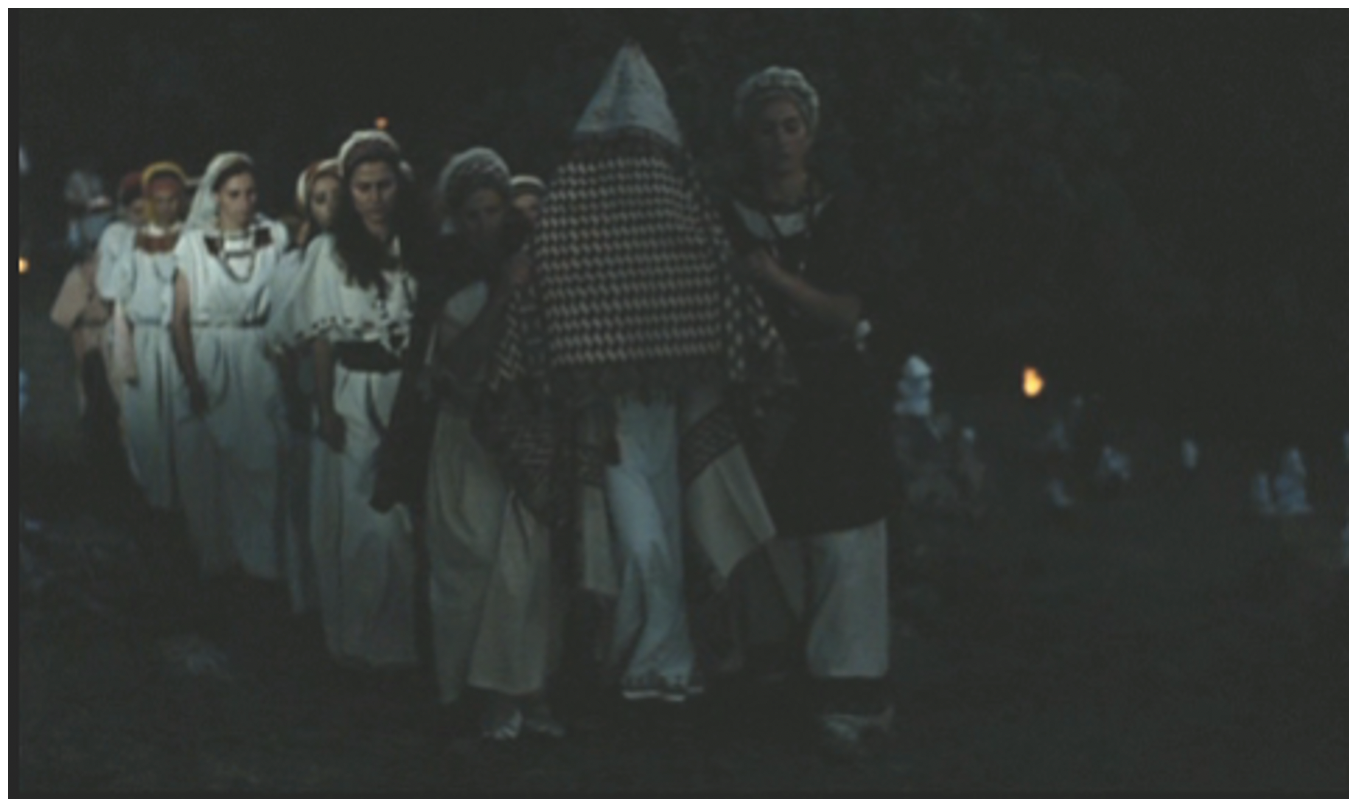 Baya’s Mountain by Azzedine Meddour explores Amazigh identity through a trip back in time to a mythical period in North Africa, notably through the ritual of Anzar (God of rain) and his symbolic nuptials with Baya (Goddess of earth), although the movie itself historically takes place during the Kabylian struggle against the French colonial army in 1871. Machaho by Belkacem Hadjadj sheds light on the archaic traditions of revenge through his use of timeless settings and costumes which reflect the entirety of the Mediterranean basin, evoking, along the way, Lebanon, Greece, or southern Corsica, as these societies all operated under a patriarchal honor code. The two formulations mentioned above are very different, since the first one brings forth a kind of film that promotes the territorial identity of Northern Africa, which contains “Tamazgha” film, while the second one integrates Amazigh film into Algerian cinematography because these movies, whether in Arabic dialect or Tamazight, come from a historically Amazigh culture. 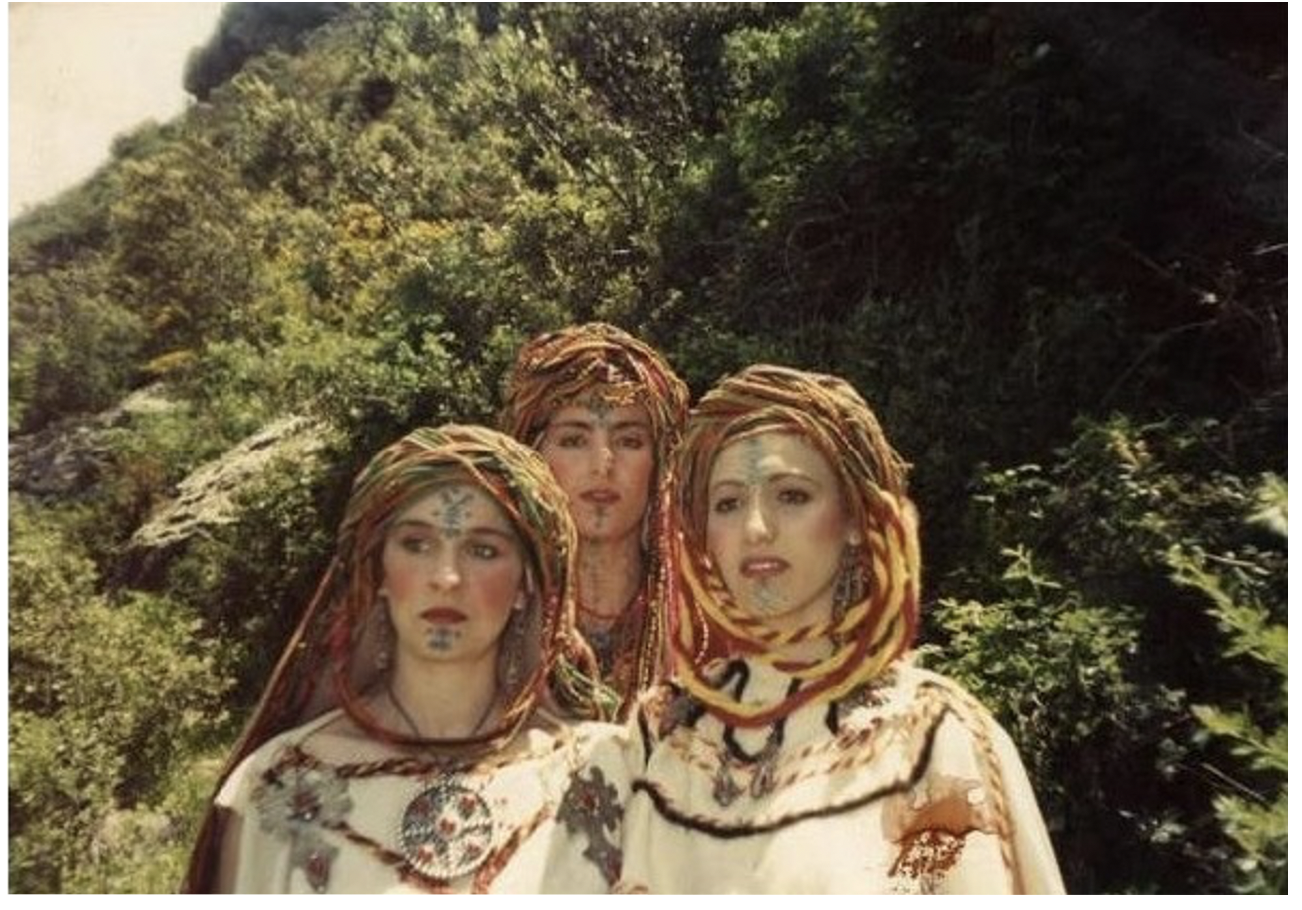 The Women Warriors in Baya's Mountain

The first of the three pioneering movies is The Forgotten Hill. It is important as an adaptation of the eponymous novel by Mouloud Mammeri, which was published during the colonial period (1952) and vehemently attacked by Algerian politicians because it threatened the picture-perfect image of Algerian society promoted by nascent nationalism in Algeria. The author paints a realistic picture of Kabilya at a time when Algerian nationalists preferred to project to the world a monolithic image of the Algerian people, stripped of their identifying characteristics. This exclusively privileged the Arabo-Islamic identity and denied the Amazigh identity post-independence. The novel was heavily criticized and the screenplay adapted from it in 1958 by Abderrahmane Bouguermouh, then one of Mammeri’s fellow students at the IDHEC in Paris,  by the  Ministry of Culture in 1969. 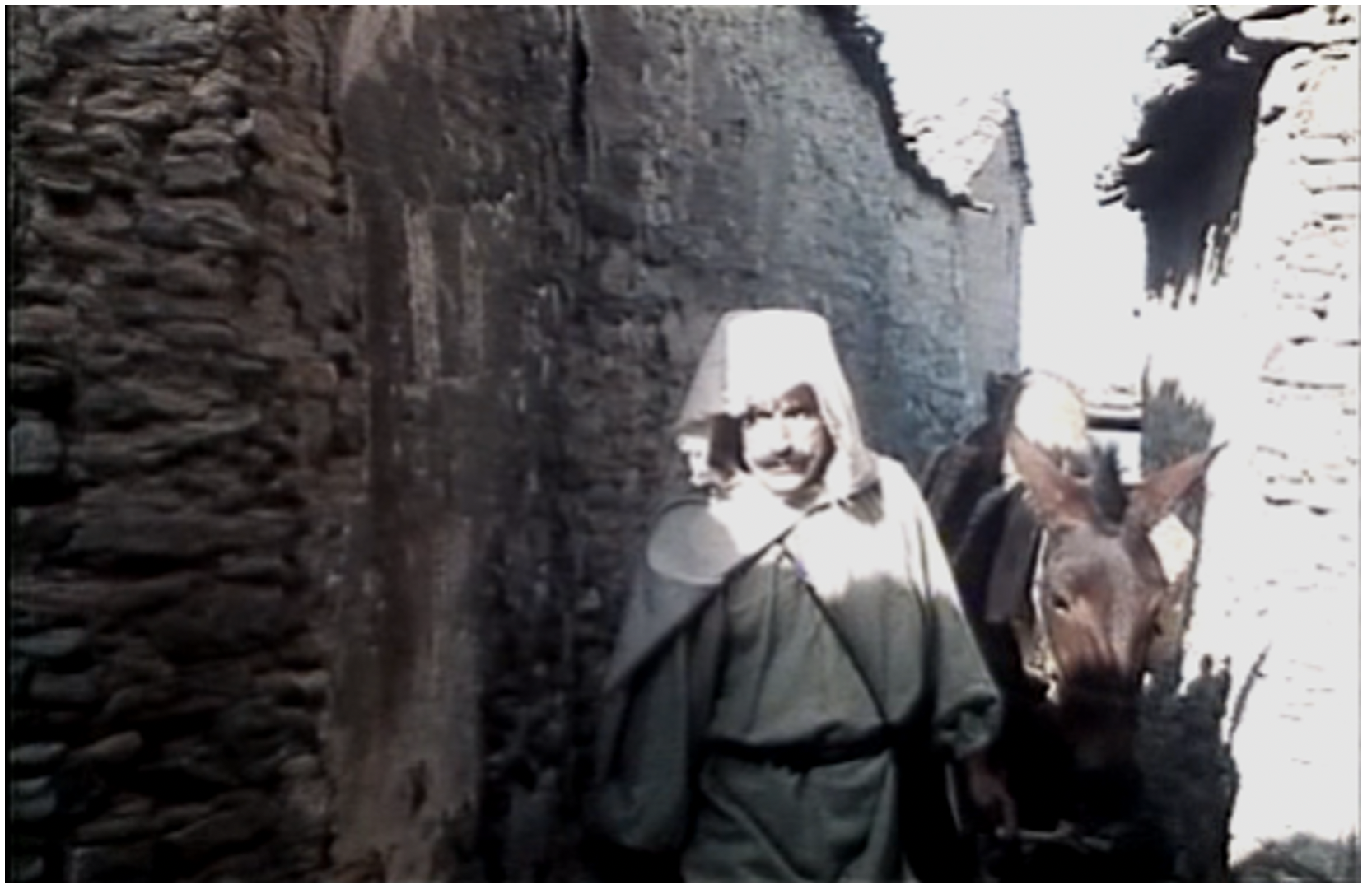 Belkacem Hadjadj director of and main actor in Machaho 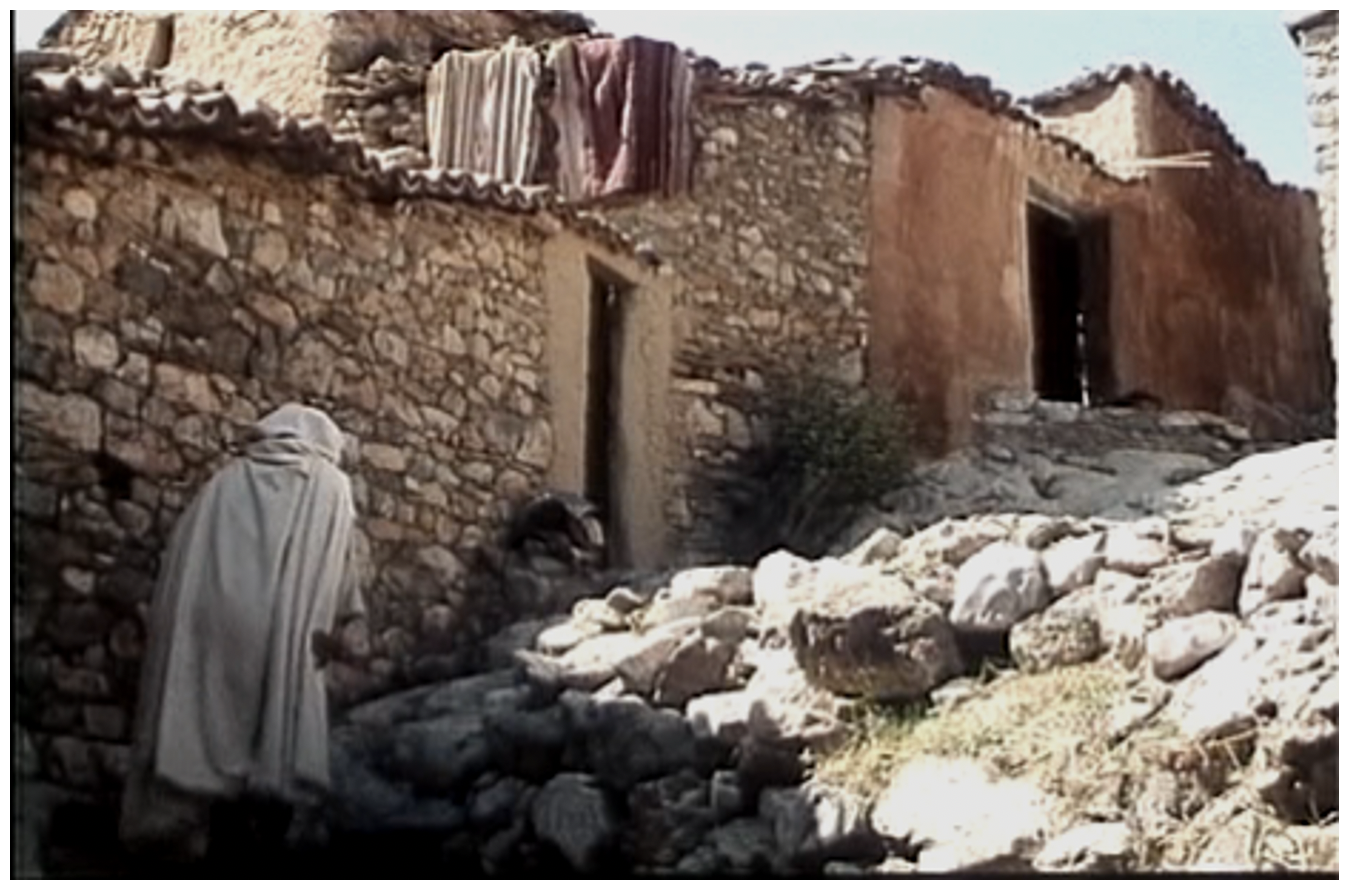 In search of vengeance

These first three movies paved the way for many more. After Azzedine Meddour and Belkacem Hadjadj traveled to attend the filming of The Forgotten Hill by Abderrahmane Bouguermouh, they hired his actors for their own movies. Between the three of them, their movies represented specific places, atmospheres, and pieces of social culture that identified the Amazigh beyond language. For instance, Si Moh ou Mhand by Rachid Benallal and Lyazid Khodja, which relate the life of a poet of the 19th century, Fadhma N’soummer by Belkacem Hadjadj talks about a woman who fought against colonialism in the same century, and Mimezran a fiction film by Ali Mouzaoui embodies the challenges filming Algerian movies encountered—not a particular set of hardships brought about by the newness of the genre. They deal with problems quietly and without the popular uproar that carried forward earlier Amazigh movies: Amazigh film is now a fait accompli. What’s next is to understand why Amazigh film has not made its way across North Africa and the reason it is absent from global film festivals. 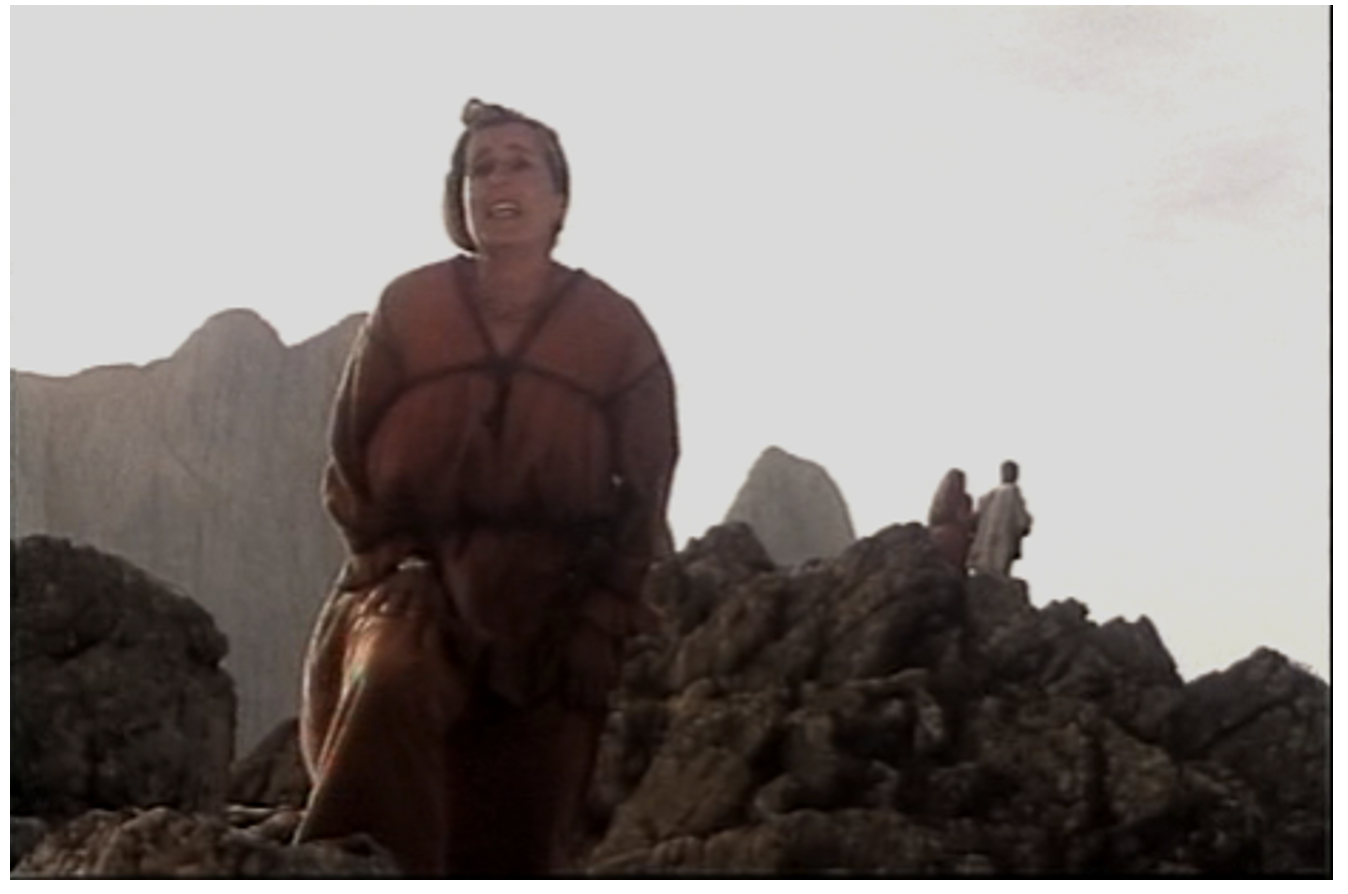 Amazigh production in Algeria naturally falls within the confines of today’s artistic landscape yet remains very obscure for two reasons: first, limited financing, and second, the lack of reliable distribution channels, which hinders all Algerian films. There is also a serious lack of film industry training, except for a few marginal workshop projects initiated by film enthusiasts.

There are no schools, institutes, or universities which offer this training in Algeria. The first and only program to date was the Institut National du Cinéma (INC) [National Film Institute], launched in 1964 and dissolved in 1968, in a political landscape that leaned towards the use of cinema as a propaganda tool. While the first Amazigh film directors were professionals trained in reputable international schools (VGIG, INSAS, IDHEC…) –mainly in the West or in France –during Algeria’s socialist period, the untrained generation that followed faced harsh production conditions. Today, in Algeria and even Morocco, the majority of producers are drawn to small-budget Amazigh films, aimed at television broadcasting, thus dimming the hope that the film will end up on the big screen. 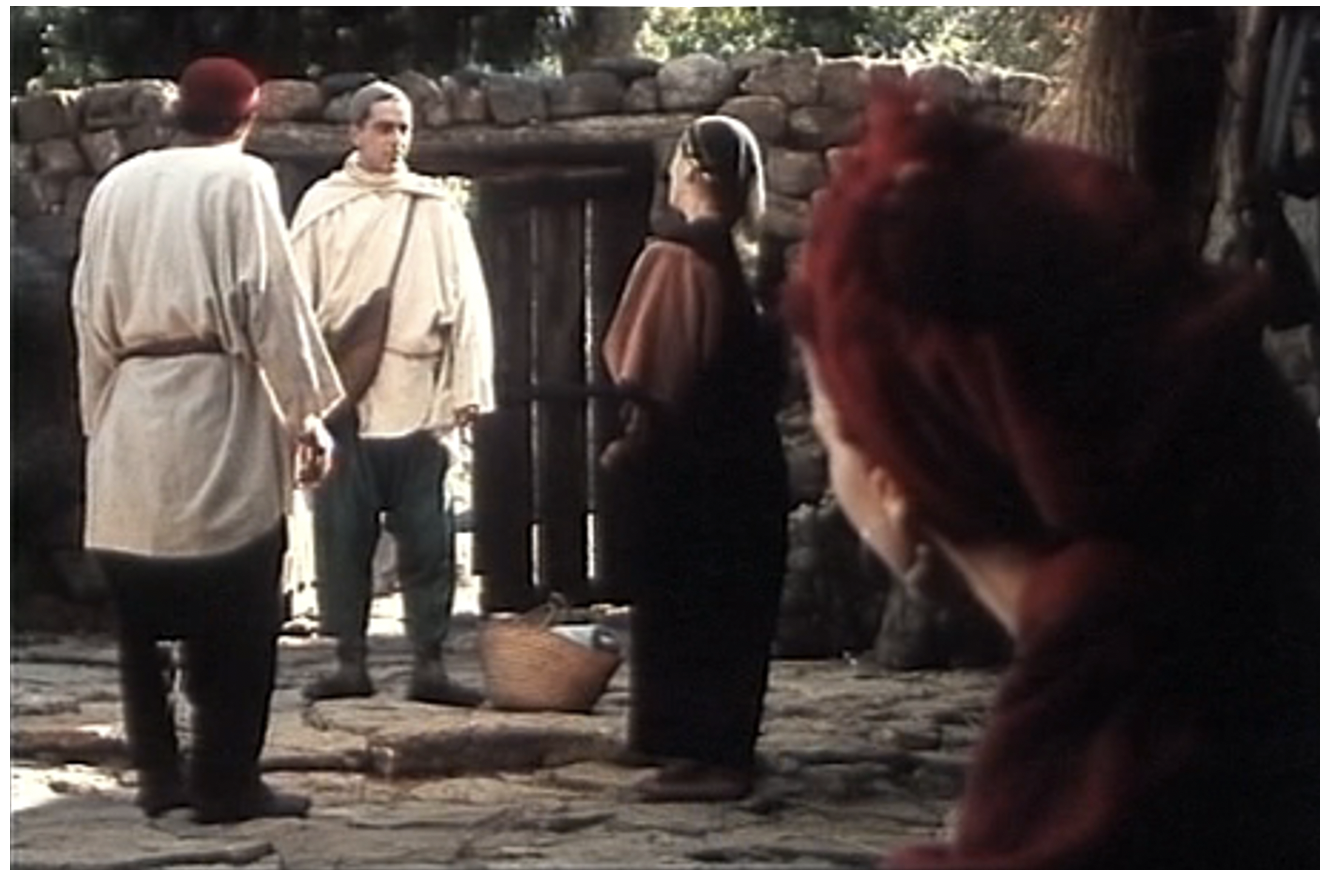 In a nation where film undergoes fruitful periods as well as dry spells, the Amazigh film landscape has not withered but has experienced, in the last few years, a renaissance in which a new generation is being trained in screenplay writing, directing, and editing workshops. From time to time, rare gems like L’Mouja (The Wave) by Omar Belkacemi (2015) and 3uhdeɤkem (I Promise to You) (2016) by Mohamed Yargui emerge; two movies heralding a new Amazigh film culture transcending the borders of Kabylia and even Algeria. Whatever you call it: national or territorial film, category or genre, Amazigh film or film of Amazigh expression, it seems to be experiencing a period of quiet growth, which should ward off the speculations of both its critics and researchers for now.

[This article was translated from the French version by Safoua Berady.]