In this episode, which was co-hosted by Cat Haseman from the Grad Student Corner and LWA producer Mohammad Abou-Ghazala, the team announced upcoming publications, shared pedagogical content and must-read pieces on Jadaliyya, discussed a roundtable on the aftermath of the Gezi Uprisings in Turkey, and covered the fifth annual Political Economy Summer Institute, the newly-minted Latin East Working Group, and the Fall 2021 issue of the Arab Studies Journal.

The new edition of the Status / الوضع audiovisual podcast, Issue 8.2, will be announced soon on Jadaliyya and our social media, so stay tuned!

Ten Years On: Mass Protests and Uprisings in the Arab World (2:17)

Co-hosts Cat and Mohammad speak with Maria Bou Zeid about a panel she moderated on Lebanese media.

The collaborative, year-long “Ten Years On: Mass Protests and Uprisings in the Arab World” project has reached it’s halfway mark. Six out of Twelve months down!

One of this month’s signature panels, titled “Media Framing of Political Events in Lebanon,” was moderated by Maria Bou Zeid. The panel addressed how Lebanese media responded to the 17th October uprising and the 4th August Beirut Port explosion, as well as how political agendas influenced the media’s coverage. 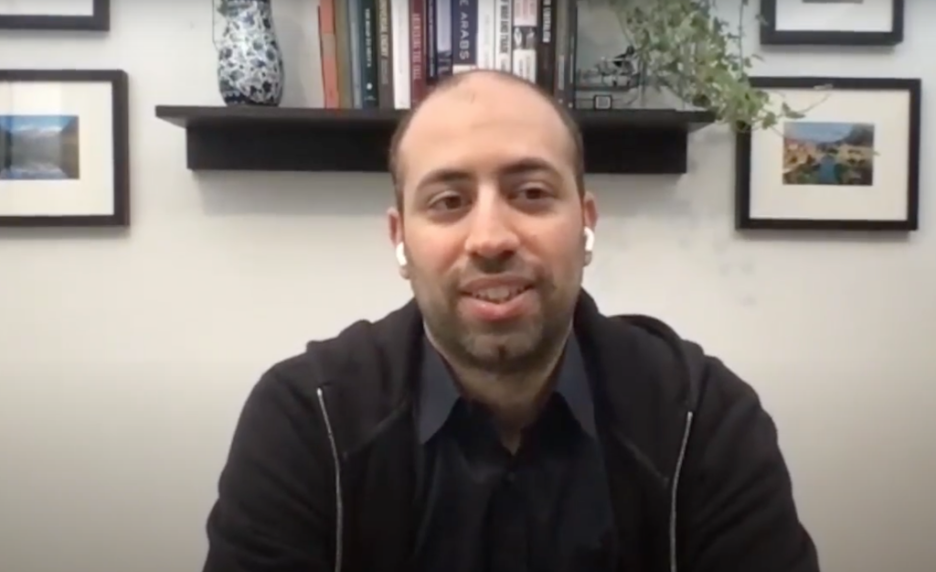 Co-Editor of Jadaliyya’s Critical Currents in Islam page Abdullah Al-Arian discussed how Islamism has been impacted by the experience of the Arab Uprisings.

The TYO project held another event, co-sponsored by Stanford University’s Center on Democracy, Development, and Rule of Law, and the Abbasi Program in Islamic Studies. The event was titled “Islamists and the Arab Uprisings.”

The Political Economy Project held the fifth annual Political Economy Summer Institute (PESI). PESI brings together select faculty leaders and students for four days of intensive discussions on key texts of critical political economy. In addition to the faculty-led sessions on topics such as state formation, imperialism, and labor, students presented and received feedback on their current research projects. 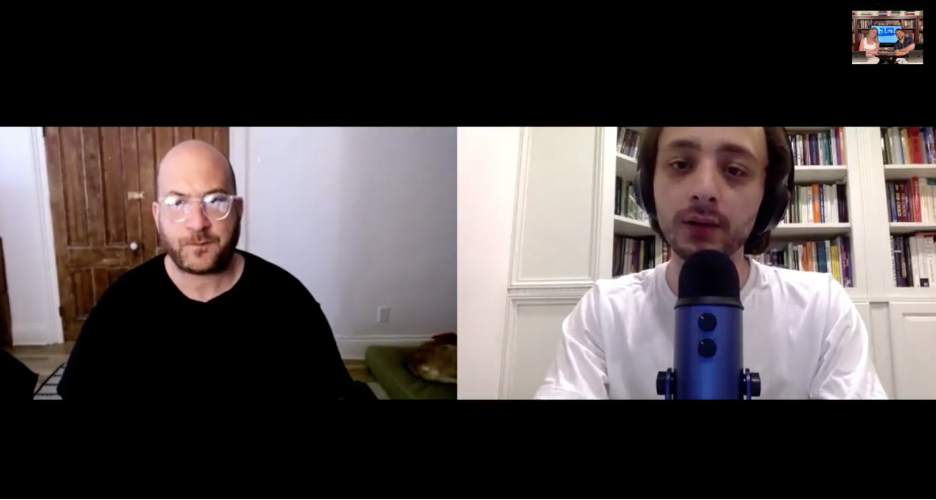 Mohammad speaks with Kareem about his PESI keynote talk.

This year, Kareem Rabie gave the PESI keynote talk in conversation with Jadaliyya Co-Editor Sherene Seikaly. Kareem discussed his book titled "Palestine Is Throwing a Party and the Whole World Is Invited: Capital and State Building in the West Bank."

Omar S. Dahi and Amal Eqeiq came on the show to discuss the formation of the Latin East Working Group.

ASI co-sponsored a webinar featuring the launch of a brand new initiative, the Latin East Working Group. The Latin East Working Group is a collaboration between our partners at Security in Context, the Arab Council for the Social Sciences, the Latin American Council for the Social Sciences, and the North American Congress on Latin America.

In the webinar, scholars from Latin America and the Arab region introduced their work on securitization from  comparative regional and interdisciplinary perspectives. The working group will continue to have several public meetings throughout the year, showcasing the development of their research projects. 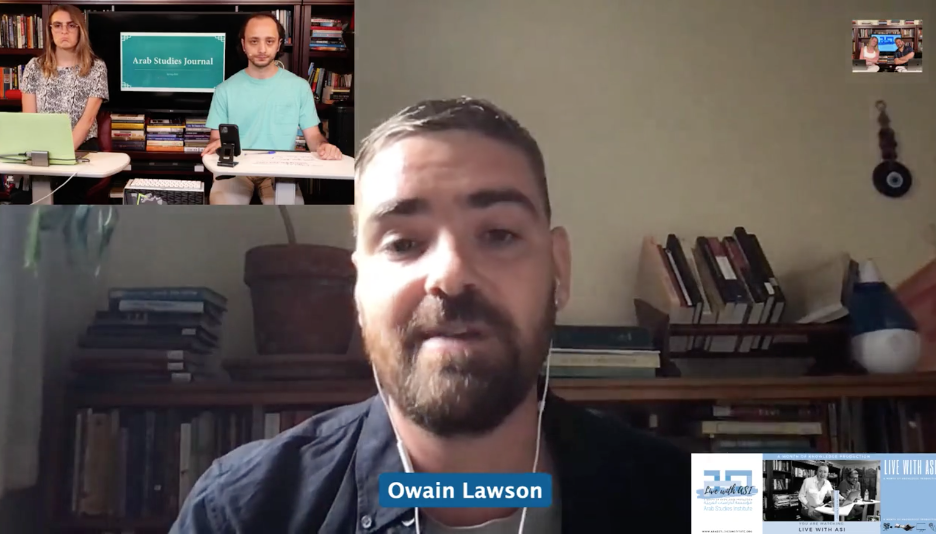 Cat and Mohammad speak with Owain Lawson, co-editor of ASJ

The Fall 2021 Issue of the Arab Studies Journal is now available! This issue features articles that explore the production and circulation of knowledge from diverse disciplines and approaches, as well as a collection of reviews examining the latest contributions to the interdisciplinary study of the Middle East and North Africa. 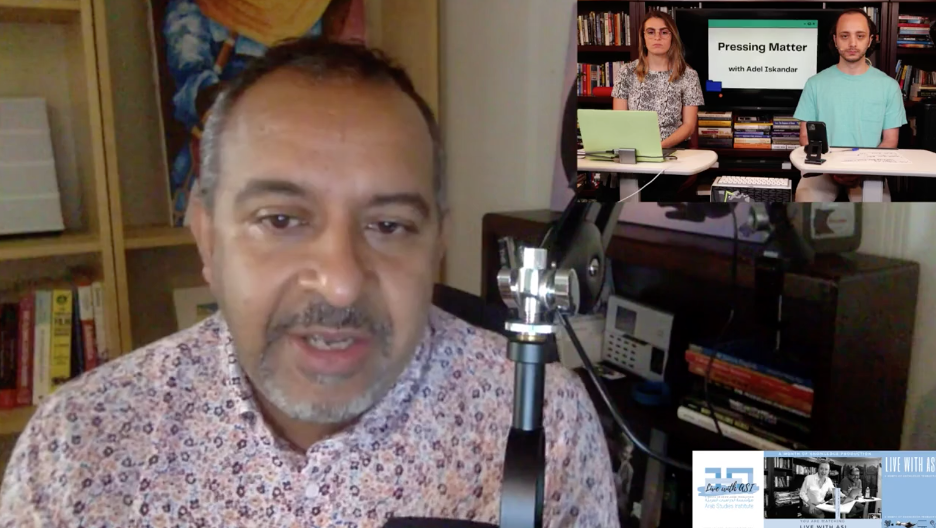 Adel Iskander shares highlights from the most recent episode of “Pressing Matter.”

Adel Iskander came on the show to share takeaways from his podcast on critical media trends in the Arab region, called “Pressing Matter.” In this month’s hour-long episode, Adel and his colleague Malihe Razazan talk about the changing media framing regarding Palestine. The episode touches on the often impenetrable barriers of “mainstream media” as well as on the important role of activists, mobilizers, and influencers who have successfully shifted the discourse on Palestine. The episode also focuses on how scholars and researchers are becoming increasingly recognized as authorities on understanding the history of the colonization of Palestine. 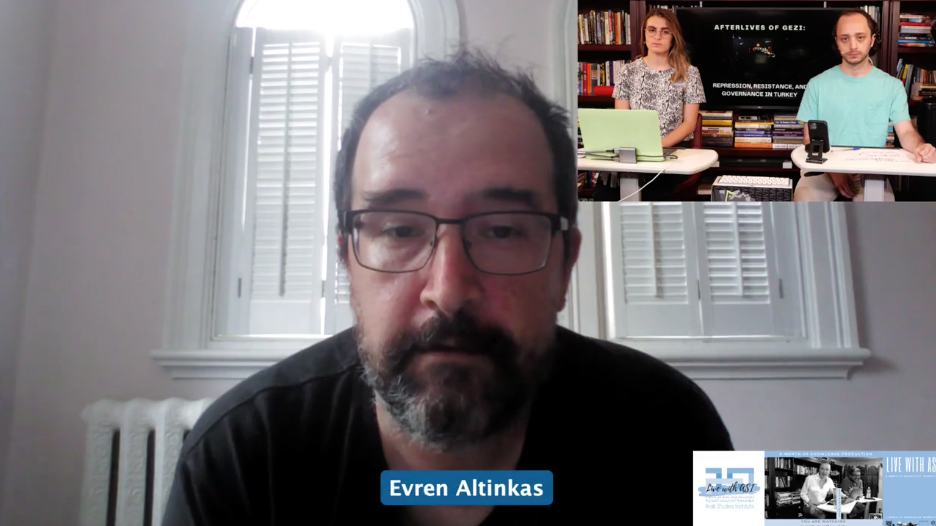 Jadaliyya Turkey Page contributor Evren Altinkas shares insights into what he and his colleagues hoped to accomplish with the recent “Afterlives of Gezi” roundtable.

This summer marks the eighth anniversary of the Gezi Uprising which erupted in Turkey in 2013. To mark this anniversary, Jadaliyya’s Turkey Page put together a roundtable titled, “Afterlives of Gezi: Repression, Resistance, and Governance in Turkey,” where they asked contributors to reflect on the continuing effects of the Gezi Uprising.

Coincidentally, June 2013 also marks the birth of Jadaliyya’s Turkey Page, which was founded in the midst of the uprising. As is noted in the Editor’s Introduction, this roundtable should not be understood as a commemoration of Gezi as an event in the past, but rather as an attempt to contribute to the continuation of its spirit into the present and the future.

The pieces included in this roundtable grapple with the continuities of Gezi from a variety of perspectives, addressing topics such as academic repression, challenges facing the anti-authoritarian opposition, the Turkish state’s strategic responses, and more.

This month MESPI released another installation of the “Engaging Books” series. Each installment highlights a trending topic in the MENA publishing world. This installment focuses on publications from Stanford University Press on the theme of the Arab Uprisings.

“Salt and Water: An Ode to Ghandafar Abu Atwan and Bassel Al-Araj” was published on the fifty-seventh day of Ghandafar’s freedom strike. The piece highlights the power and theory of Palestinian hunger-strikers in Israel prisons, pulling from Ghandafar’s own words, and historical lessons and academic theory on Palestinian resistence to Israeli colonial violence.

“The World that Al-Haq Made” by Lisa Hajjar explains how the Palestinian organization Al-Haq pioneered the use of international humanitarian law as a tool to expose, condemn, and explain the illegalities and illegitimacy of Israeli rule in the occupied territories.

Carly A. Krakow spoke with Afrah Nasser about Western media’s lacking coverage of the dire humanitarian conditions and political situation in Yemen. The two discuss the role of the Saudi and UAE-led coalition, the Houthis, and more, drawing on Nasser’s experience as a journalist and her work collecting testimonies from Yemeni civilians devastated by more than six years of war.