We are very happy to share with everyone that this month marks Jadaliyya’s 11th birthday!

Over the last 11 years, Jadaliyya has grown tremendously in ways we truly could never have imagined. Stay on the lookout for an 11th anniversary post on Jadaliyya that will highlight a year of knowledge production and celebrate the many activists, journalists, and scholars who have collaborated and published scholarship over the past year.

Co-hosts Bassam and MK wish a happy 11th birthday to Jadaliyya and invite Egypt Page Co-Editor Hesham Sallam on the show to reflect on more than ten years of the publication’s oldest content page. 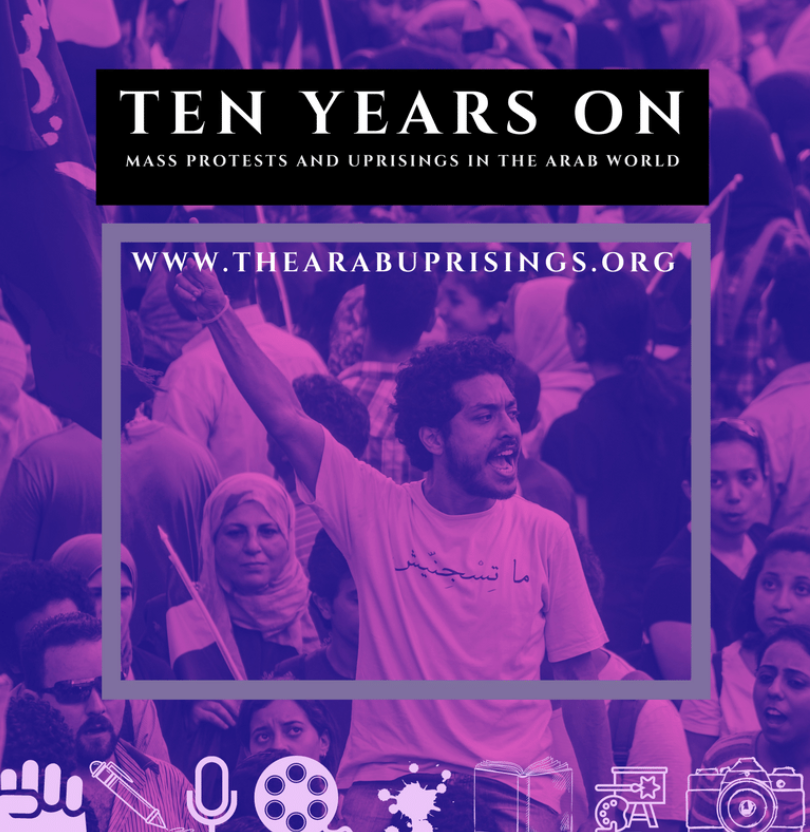 We are now in the 11th month in the year-long collaborative Ten Years On: Mass Protests and Uprisings in the Arab World.

Last week, the Ten Years On project held a panel titled “Displacement, Disruption, and Scholarly Production,” where scholars from the region discussed the specific effects of displacement on cultural and knowledge production in the region following the 2011 Uprisings. The panelists looked at the many impacts of authoritarian retrenchment and targeting of universities throughout the region, and spoke to their own experiences as scholars and academics.

With us now is one of the panel’s participants, Basileus Zeno, who is Karl Loewenstein Fellow and Visiting Lecturer in Political Science at Amherst College.

In March earlier this year, the Centers for Middle East Studies at Harvard University and the University of California, Santa Barbara held a roundtable titled “Archives, Revolution, and Historical Thinking” as part of the Ten Years On Project. The participants published their contributions to the roundtable in Jadaliyya last month, so be sure to check it out in the Digest.

As Jadaliyya Co-Editor Sherene Seikaly remarks in the Editor’s Introduction, this roundtable brought together a variety of esteemed scholars to reflect on the relationships between revolutions, archives, and how we think about history. They each address these questions from the perspective of different countries, such as Syria, Iran, Iraq, Algeria, and Egypt.

Nadya Sbaiti talks about a past Ten Years On panel titled “Archives, Revolution, and Historical Thinking."

For the 20th episode of the Connections podcast, Jadaliyya Co-Editor and friend of the show Mouin Rabbani spoke with Zachary Foster, who earned his PhD in Near Eastern Studies at Princeton University. In this episode, titled “The Invention of Palestine,” Mouin and Zachary examined how and why the terms “Palestine” and “Palestinian” came to be contested, and measured various claims in this regard against the historical record.

Zachary Foster joins the show live to talk about his research, which was recently highlighted and dissected on Connections Podcast Episode 20: "The Invention of Palestine with Zachary Foster" hosted by Mouin Rabbani.

Tankra Tamazight: Revival of Amazigh Indigeneity in Literature and Art

We have a very special series published on Jadaliyya’s Maghreb Page, titled “Tankra Tamazight, Amazigh Revival, and Indigeneity in North Africa.” This thorough collection of articles takes on the monumental and crucial task of grappling with the ongoing “awakening” in Amazigh language and culture.

The series addresses this awakening in its various aspects, such as literature, cinema, and art, and calls for a revamping of Amazigh studies so as to prioritize the study of Amazigh cultural production in its own language.

Brahim el Guabli calls in to the show to discuss the recent series on Amazigh Studies published on Jadaliyya’s Maghreb Page, titled "Tankra Tamazight: The Revival of Amazigh Indigeneity in Literature & Art"

In 2019, Jadaliyya’s Iran Page launched a podcast series titled, “1979 Generation,” which focused on feminism and revolution by drawing on personal memory as well as activist and scholarly engagements. Hosted by Iran Page Co-Editor Manijeh Nasrabadi, this series brought Iranian feminists who lived through the 1978-1979 revolution to share their stories of revolutionary upheaval and the contested role of women in the national liberation project and to reflect on what feminism means to them.

After a hiatus, we are thrilled to share with everyone Manijeh Nasrabadi is once again picking up the mic to continue this fantastic series! In fact, MK spoke with Manijeh yesterday about her upcoming episode. Let’s take a look.

After a brief hiatus, the 1979 Generation Podcast is back. Manijeh Nasrabadi speaks with co-host MK Smith about the show, which shares stories of revolutionary upheaval and the contested role of women in the nat'l liberation project in Iran.

The MESPI team published a new Engaging Book Series. As a reminder to our viewers, Engaging Books is a monthly series featuring new and forthcoming books in Middle East Studies from publishers around the globe. This installation features Gingko Library’s Selection of works on the theme of the Arab Uprisings. 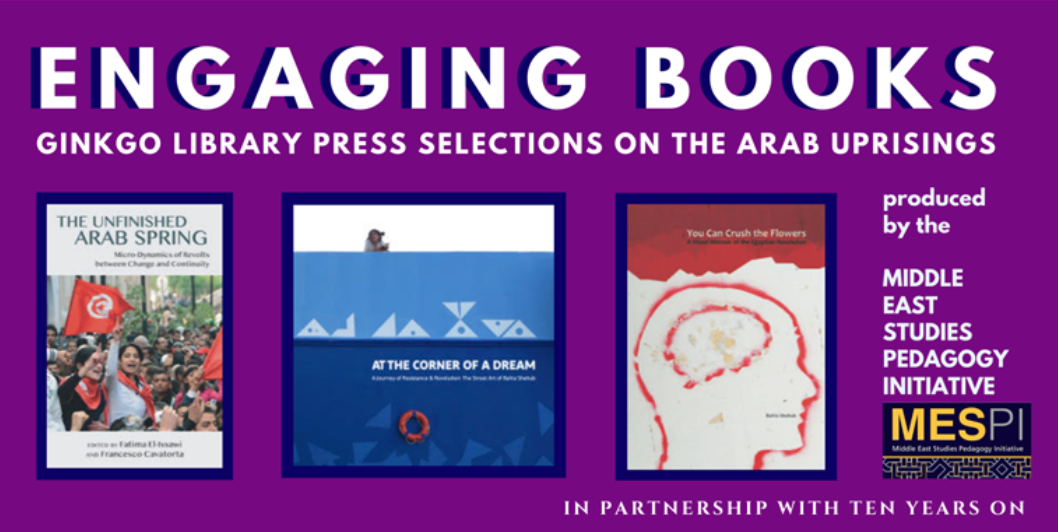 MESPI also published the fourth part of their Spring 2021 Peer Reviewed Articles Review, or PRAR, which presents a collection of journals and their articles concerned with the Middle East and Arab world. Skimming through the titles and abstracts featured in the PRAR is a great way to keep current on the state of the field.

As part of the Ten Years On project, Elizabeth Kassab put together an amazing Essential Readings on Philosophy and the Uprisings with MESPI. The post covers writings dealing with all sorts of questions, especially pertaining to what the appropriate role for the intellectual is during an uprising. This ER is crucial for anyone interested in how the uprisings have affected philosophical productions in the region, and the relationship between the quest for a sense of self and the post-independence state. 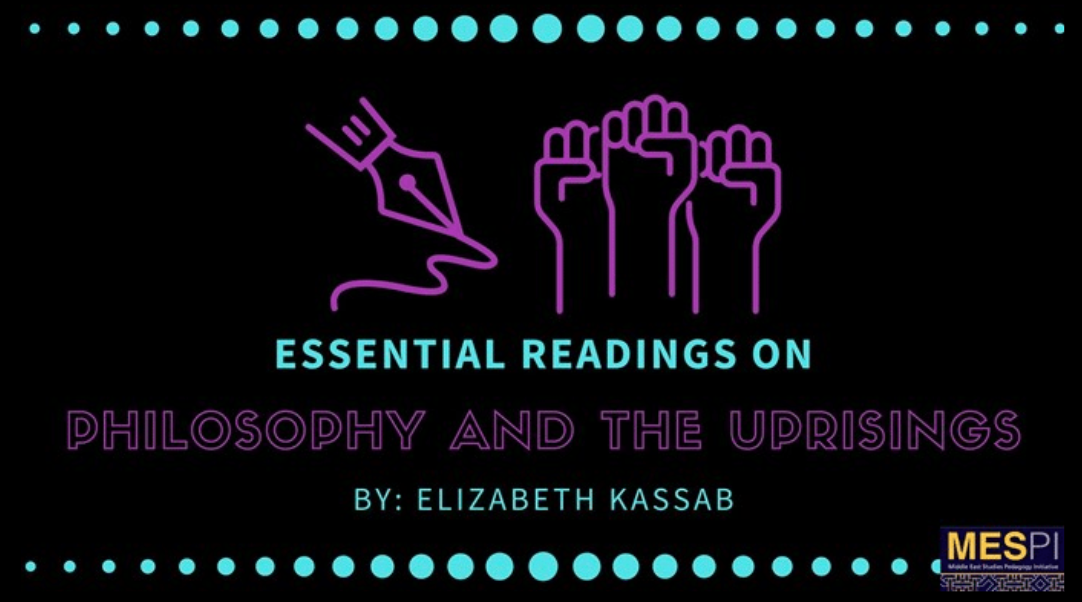 Cat Haseman calls in to the show for her monthly segment, the Grad Student Corner, and to highlight the Jadaliyya Foreign Policies media round-up.

There were several New Text Out Now interviews conducted this month with a variety of authors. 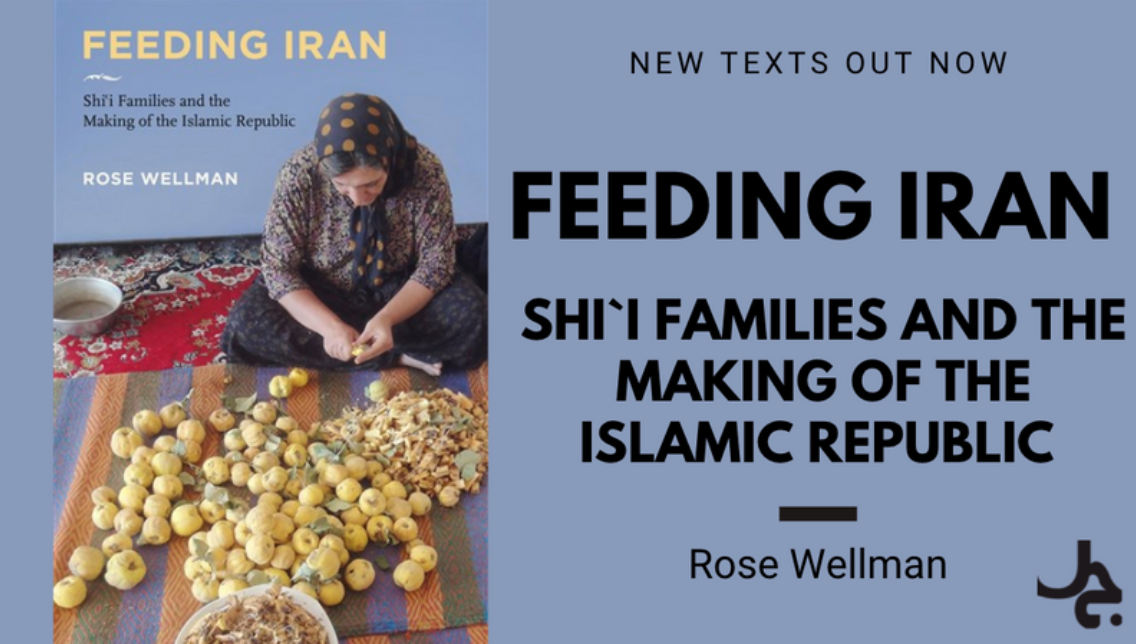 First, we have an interview with Rose Wellman about her new book titled “Feeding Iran: Shi`i Families and the Making of the Islamic Republic.” Wellman’s work contributes to the field of food studies while showing that food in Iran is about more than a means of providing nutirion. In her words, food is “an agent of transformation and a vehicle for channeling divine blessing,” and beyond the household, state elites employ food to articulate, shape, and contest the making of an Islamic nation. 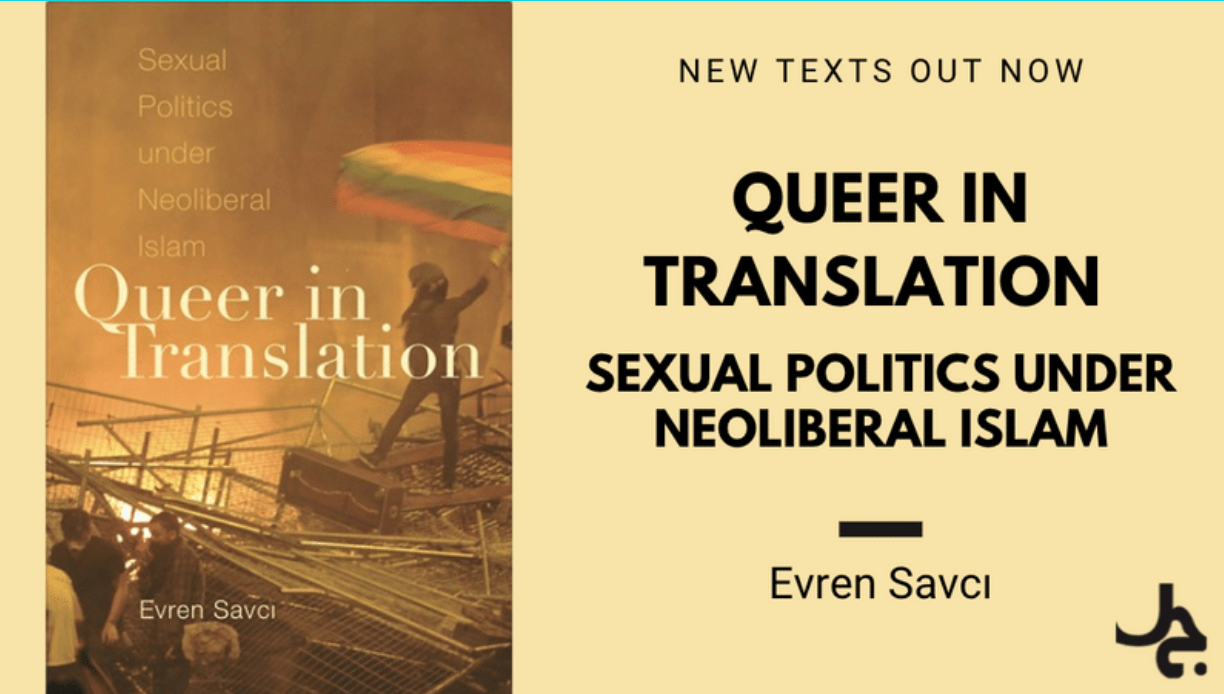 In a NEWTON interview about the book “Queer in Translation: Sexual Politics under Neoliberal Islam,” Evren Savcı describes her ethnographic methodology of tracing the travel of the contemporary vocabulary of gender and sexual episteme and politics to Turkey. Among other things, her book explores the importance of the vocabulary queer activists employ in shaping the kinds of politics they practiced.

Our first Must-Read article is titled “Undocumented Tunisian Migrants: Italy’s Use of Inhumane Detention as a Deterrence Strategy” by Jyhene Kebsi. This piece details the confinement conditions of detained Tunisian migrants in Italy, which are often worse than the conditions of criminal imprisonment. The piece further probes how these conditions are experienced as a form of punishment.

Our second must-read article is a film review by Huma Gupta titled “Environmental Film Review: She Was Not Alone 2020 Independent Iraqi Film Festival.” The article offers insights into Basra-based director Hussein al-Asadi’s short film about Fatima, a 50 year old unmarried woman who lives alone in the Iraqi swamplands. Head over to Jadaliyya’s environment page to read this review and then consider watching the acclaimed film.

Finally, in his piece titled “Islamic Republic of Rock,” Alireza DOOS-dar reflects on two years of researching the Iranian rock and heavy metal scene as part of a larger project of post-revolution cultural politics. What he finds is a complex landscape of exchange and experimentation, complicating the dominant account of a supposed opposition between underground “Western” music and authentic “Islamic” culture.