Nearly eight years since the war in Yemen began, Jadaliyya presents this collection of materials from the Arab Studies Institute’s various platforms, including Jadaliyya, Status/الوضع, Arab Studies Journal, Tadween Publishing, and the Middle East Studies Pedagogy Initiative (MESPI). Mainstream Western media continues to lack coverage focusing on dire humanitarian conditions in Yemen, analyzing the country’s complex political situation, or addressing its rich cultural history. The United Nations Organization for the Coordination of Humanitarian Affairs (UNOCHA) reports that 23.4 million people are in need of humanitarian assistance, fifty-five percent of whom are children. As documented by the United Nations Children’s Fund (UNICEF), at least 10,200 children have been killed or maimed since 2015.

As a wider public discussion unfolds about which groups of refugees and displaced people in the world rightly attract media attention to highlight the injustice they are facing, and which groups remain widely ignored despite facing protracted injustice over years, it is critical now more than ever to turn our focus to Yemen. As Yemeni journalist Afrah Nasser argues in a broadcast interview featured below, Yemen is not only ‘forgotten’—it was never sufficiently remembered in the first place.

In 2021, President Biden promised that the United States would be “ending all American support for offensive operations in the war in Yemen, including relevant arms sales” but Biden’s administration proceeded with a $23 billion weapons saleto the United Arab Emirates. The United Kingdom has continued to increase its support for the coalition through arms sales, despite legal challenges led by Campaign Against Arms Trade (CAAT) and supported by organizations such as Human Rights Watch and Amnesty International. The Saudi and UAE-led coalition has long been accused of airstrikes that indiscriminately kill and injure civilians. Rights organizations such as Human Rights Watch have also documented evidence of serious abuses and indiscriminate attacks against civilians by Houthi forces.

In November 2021, the Biden administration announced a new $650 million weapons sale, consisting of air-to-air missiles, to Saudi Arabia. A new report from the US Government Accountability Office states that the United States has failed to track civilian deaths in Yemen, and has not adequately assessed its role in these civilian deaths. As the US government breaks its promises to the Yemeni people, and to the US public, what does the future hold for Yemenis and what can analysis of the past tell readers, viewers, and listeners about the current situation? It is our hope that this collection begins to address these questions.

This collection includes articles, videos, and podcasts providing critical information from a variety of multidisciplinary perspectives. The materials gathered here address the geopolitical situation, humanitarian devastation, environmental concerns including the climate crisis and water access, the impacts of the COVID-19 pandemic, Yemeni cinema and literature, and much more. We hope that readers, viewers, and listeners can turn to the accounts provided in this collection for clarity and nuanced reflections on these subjects.

For more of Jadaliyya’s published material on Yemen, be sure to check out the Arabian Peninsula Page, edited by Neha Vora, Rosie Bsheer, and Mona Kareem. 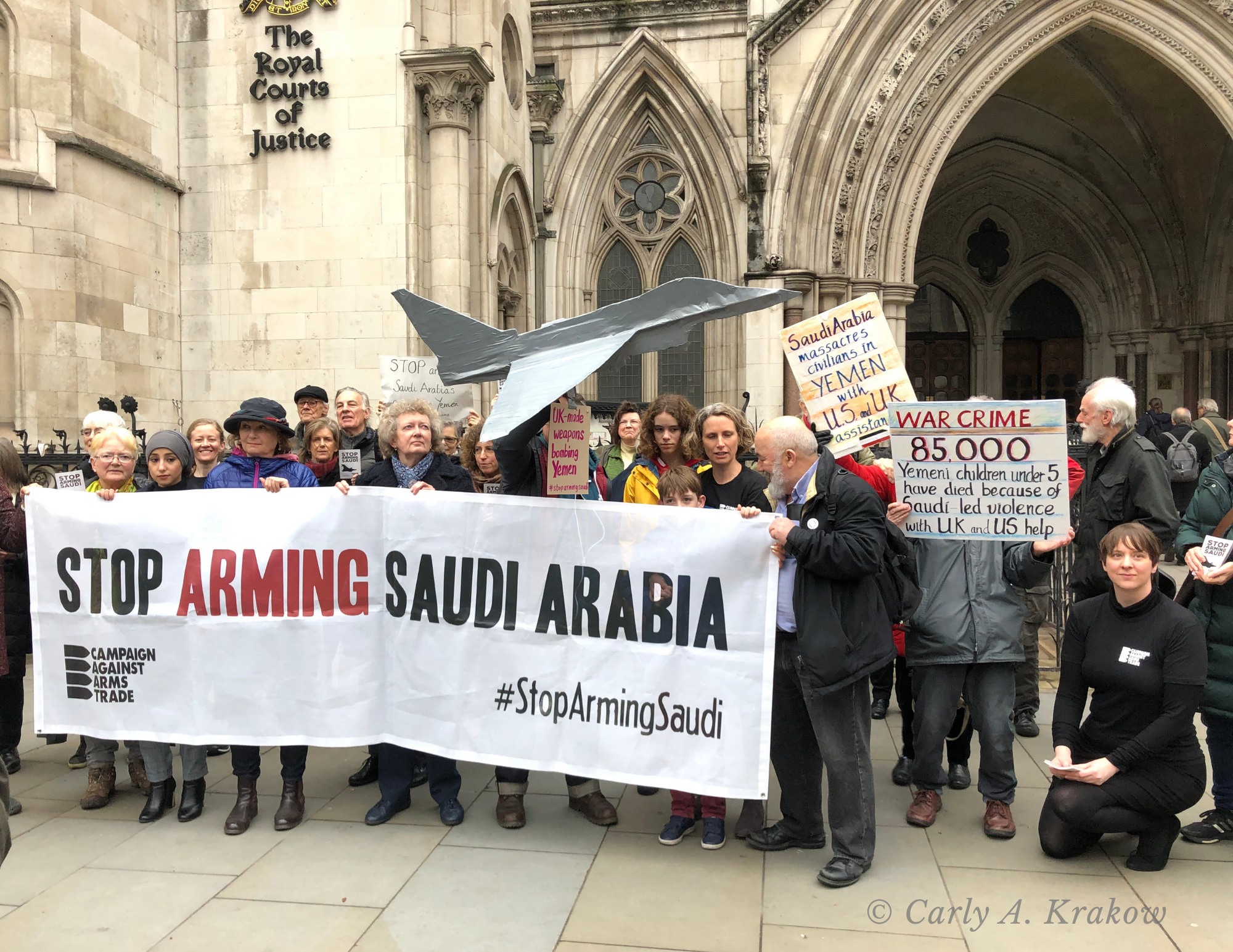 A protest outside the Royal Courts of Justice in London, United Kingdom on 9 April 2019, on the morning of the start of an Appeal hearing in which Campaign Against Arms Trade (CAAT) continued its legal challenge of UK weapons sales intended for use in Yemen. Photo by Carly A. Krakow.

Resisting Closure: Reflections on the Tenth Anniversary of Revolution in Yemen
by Kamilia Al-Eirani and Ross Porter

The Houthis and the (In)Visibility of Piety: Reorienting Piety in North Yemen
by Kamilia Al-Eriani

Water Scarcity, Climate Change, and COVID-19 in Yemen: An Interview with Helen Lackner
by Carly A. Krakow and Helen Lackner

An Interview with Aden-Based Director Amr Gamal
by Samhita Sunya

Double Exception in Yemen: Reflection on the “Weak” State
by Kamilia Al-Eriani

Yemen: Averting a Destructive Battle for Hodeida
a report by International Crisis Group

Nasser’s Gamble: How Intervention in Yemen Caused the Six-Day War and the Decline of Egyptian Power by Jesse Ferris
Reviewed by Asher Orkaby (Arab Studies Journal)

They Die Strangers: A Novella and Stories from Yemen by Muhammad Abdul-Wali
Reviewed by Gregory D. Johnson (Arab Studies Journal)

Yemen: Beyond Breaking News – Afrah Nasser in Conversation with Carly A. Krakow (Video)

The War on Yemen with Waddah al-Jaleel and Mona Kareem

Mapping the Conflict in Yemen with Sheila Carapico and Shahram Aghamir

Women and the War in Yemen: Actors or Victims? with Mira Nabulsi

The Unending War on Yemen with Sheila Carapico and Sharam Aghamir

Yemen, Battered and Forgotten with Hisham Al-Omeisy and Malihe Razazan

Yemen at Crossroads with Hisham Al-Omeisy and Malihe Razazan

Conversation with a Yemeni Activist with Radhya Almutawakel and Nahla Chahal

Since the “Change Revolution”: From the Perspective of a Young Yemeni with Farea al-Muslimi