This month, LWA producer Mohammad Abou-Ghazala filled in for MK Smith as co-host with Bassam Haddad, and they discussed a new issue of Status / الوضع Audiovisual Journal, a curated virtual reality exhibit titled “Geographies of the Future,” a panel on sectarianism in Syria since the 2011 Uprisings, the significance of recent French elections, new episodes of Connections Podcast and Search Files Podcast, a panel on the political ethics of sanctions, and marked the second anniversary of Jadaliyya’s Environment Page. 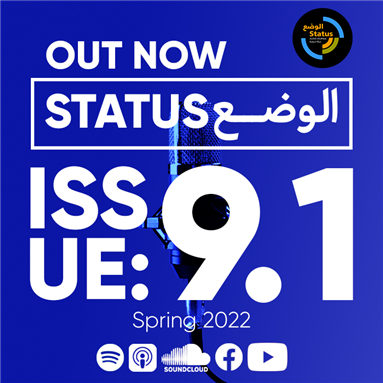 Status / الوضع Issue 9.1 is Live! This issue of the audiovisual journal contains over 35 entertaining and thought-provoking interviews with more than 50 guests, including activists, students, researchers, musicians, poets, authors, and journalists, contributed by Status team members as well as partners such as the Arab Studies Institute/Jadaliyya, Voices of the Middle East and North Africa, the Stanford Program on Arab Reform and Democracy, and the Asfari Institute for Civil Society and Citizenship at AUB.

Some highlights of this issue include a panel discussion about MESA’s vote to endorse BDS and several Arabic-language interviews focused on topics related to poetry, music, and literature. Status producer Paola Messina joins the show to preview the newest edition of the audio-visual magazine.

Artists’ Talk! Geographies of the Future 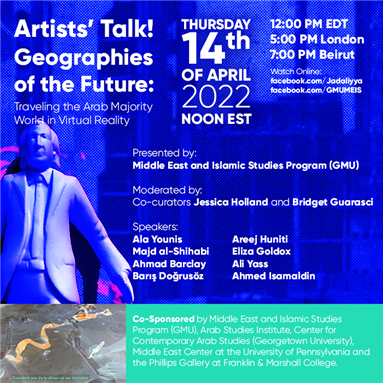 A few weeks ago, the Middle East and Islamic Studies program at GMU held a follow-up panel with the artists participating in this exhibit, where they discussed what it was like to reimagine geographies of the Arab-majority world in order to analyze political violence or to chart anew known landscapes. 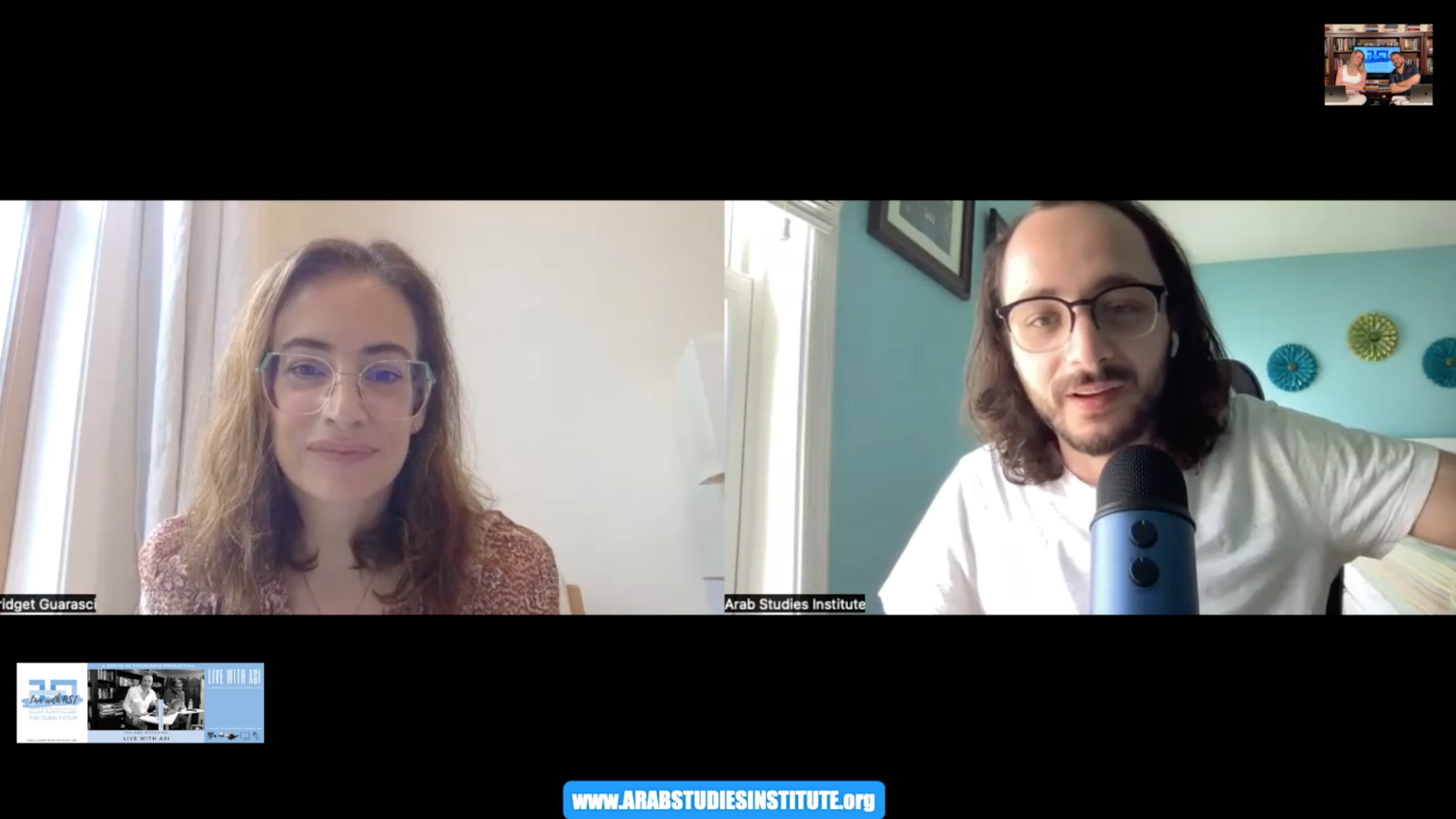 Co-host Mohammad Abou-Ghazala interviews Bridget Guarasci, one of the co-curators of “Geographies of the Future.”

The Making of Sects: Boundary Making and Sectarianisation of the Syrian Uprising, 2011-2013 Last month, ASI co-sponsored an event with George Mason University’s Middle East and Islamic Studies Program titled, “The Making of Sects: Boundary Making and the Sectarianisation of the Syrian Uprising, 2011–2013.”

In this event, Basileus Zeno, who is the Karl Loewenstein Fellow and Visiting Lecturer in Political Science at Amherst College, discussed the main factors that contributed to the increasing visibility of sectarian frameworks, and the sidelining of non-sectarian actors in the context of the Syrian Uprising and the subsequent war. 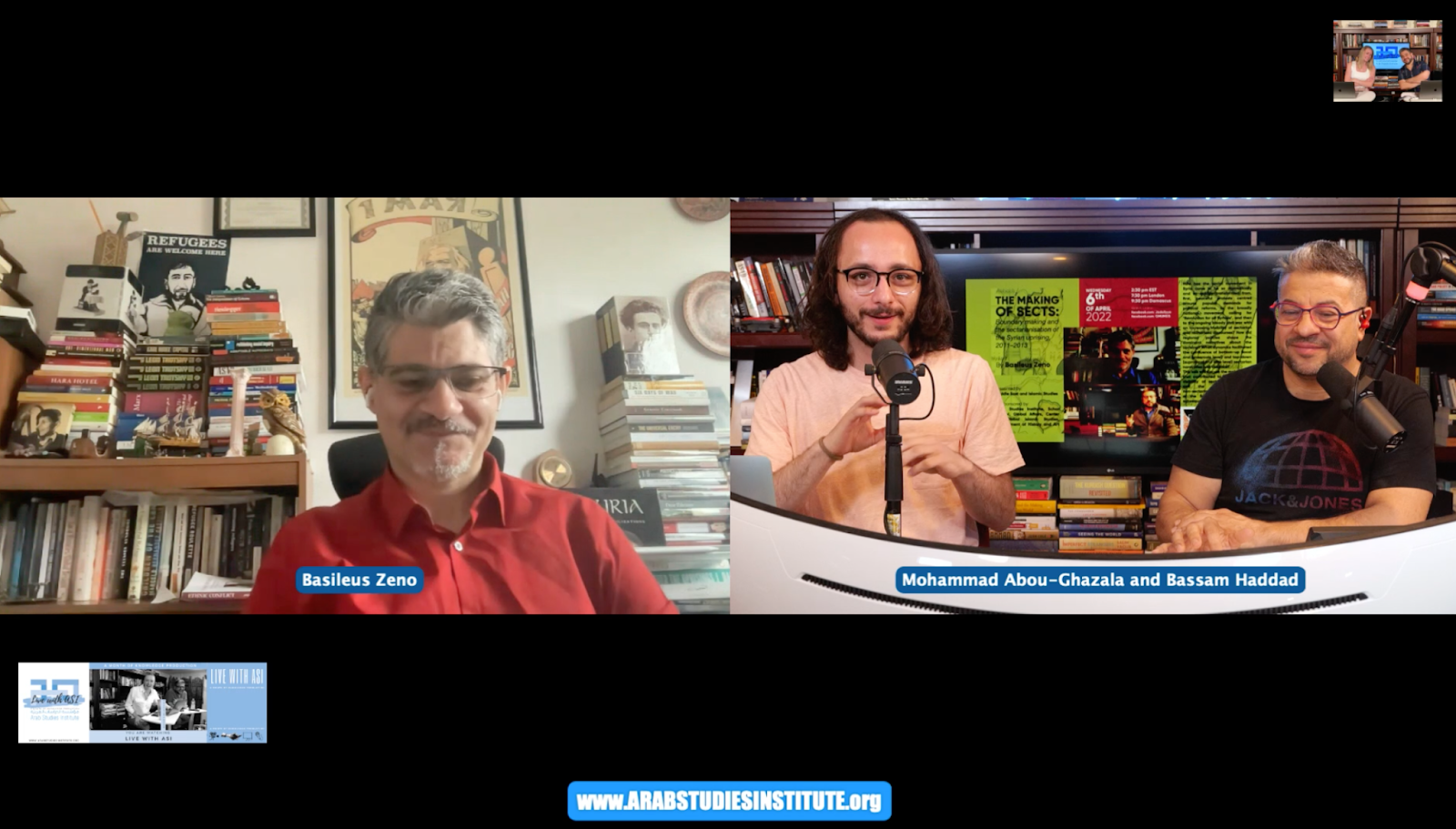 Basileus Zeno recaps a recent online seminar he hosted about the increasing visibility of sectarian frameworks in the context of the Syrian uprising. 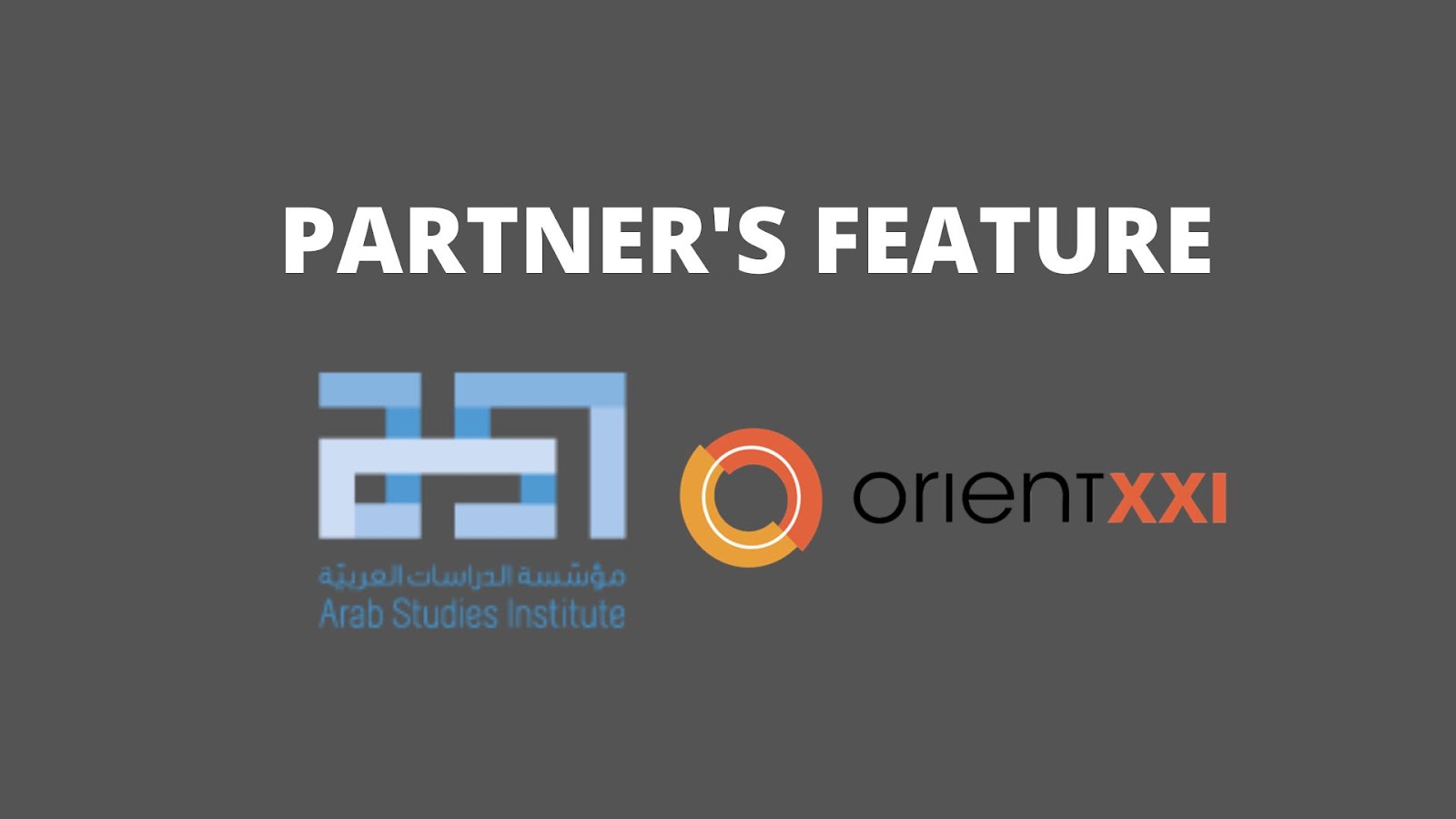 This month for our Partner’s Feature we are excited to highlight our productive, transnational partnership with OrientXXI and its publication director Alain Gresh.

OrientXXI brings together journalists, academics, and social activists to produce incisive, undistorted analysis and commentary on the Middle East and North Africa. 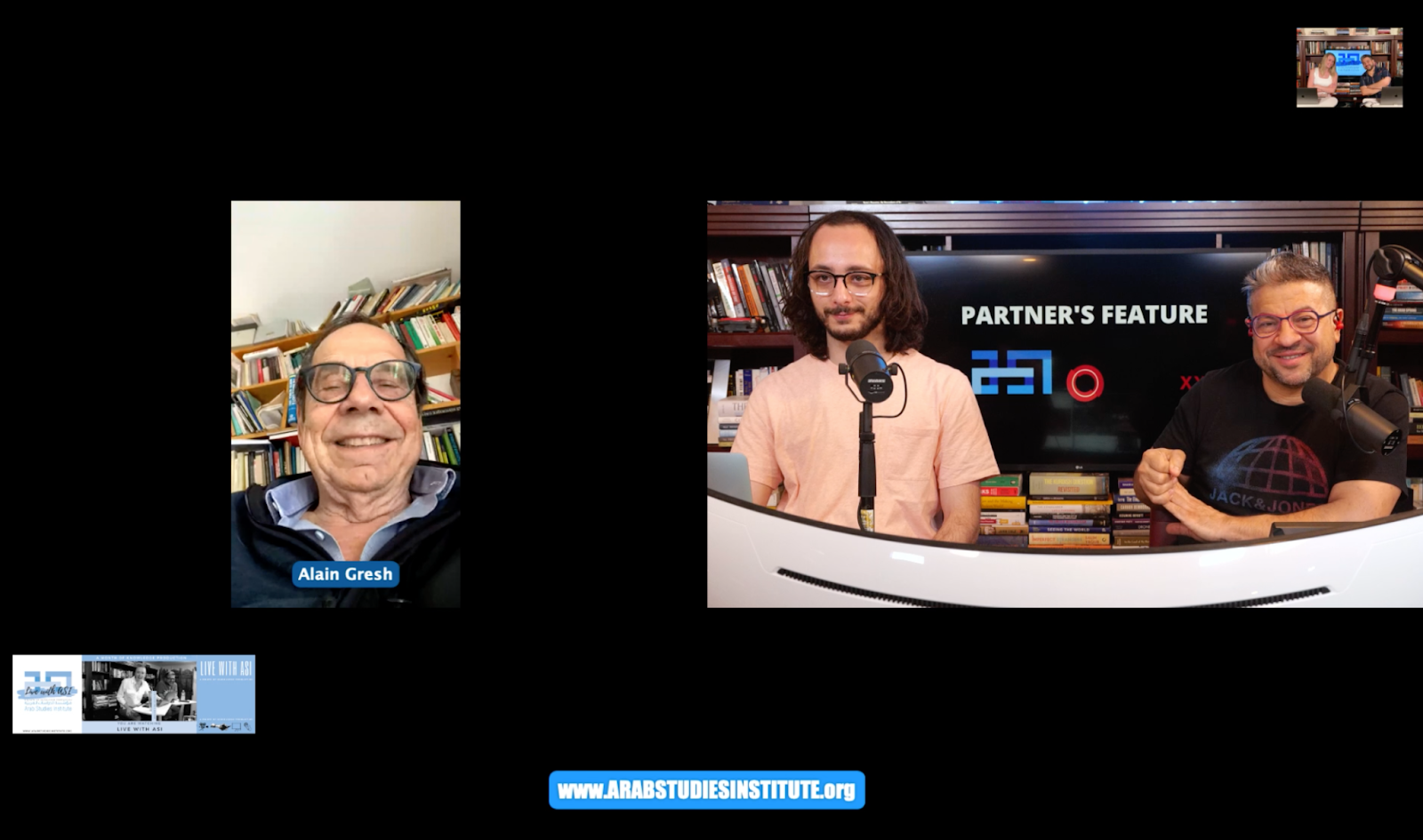 Co-hosts Bassam and Mohammad highlight the work of OrientXXI and Alain Gresh for this month’s Partner’s Feature, and discuss the domestic and regional significance of the recent French elections. 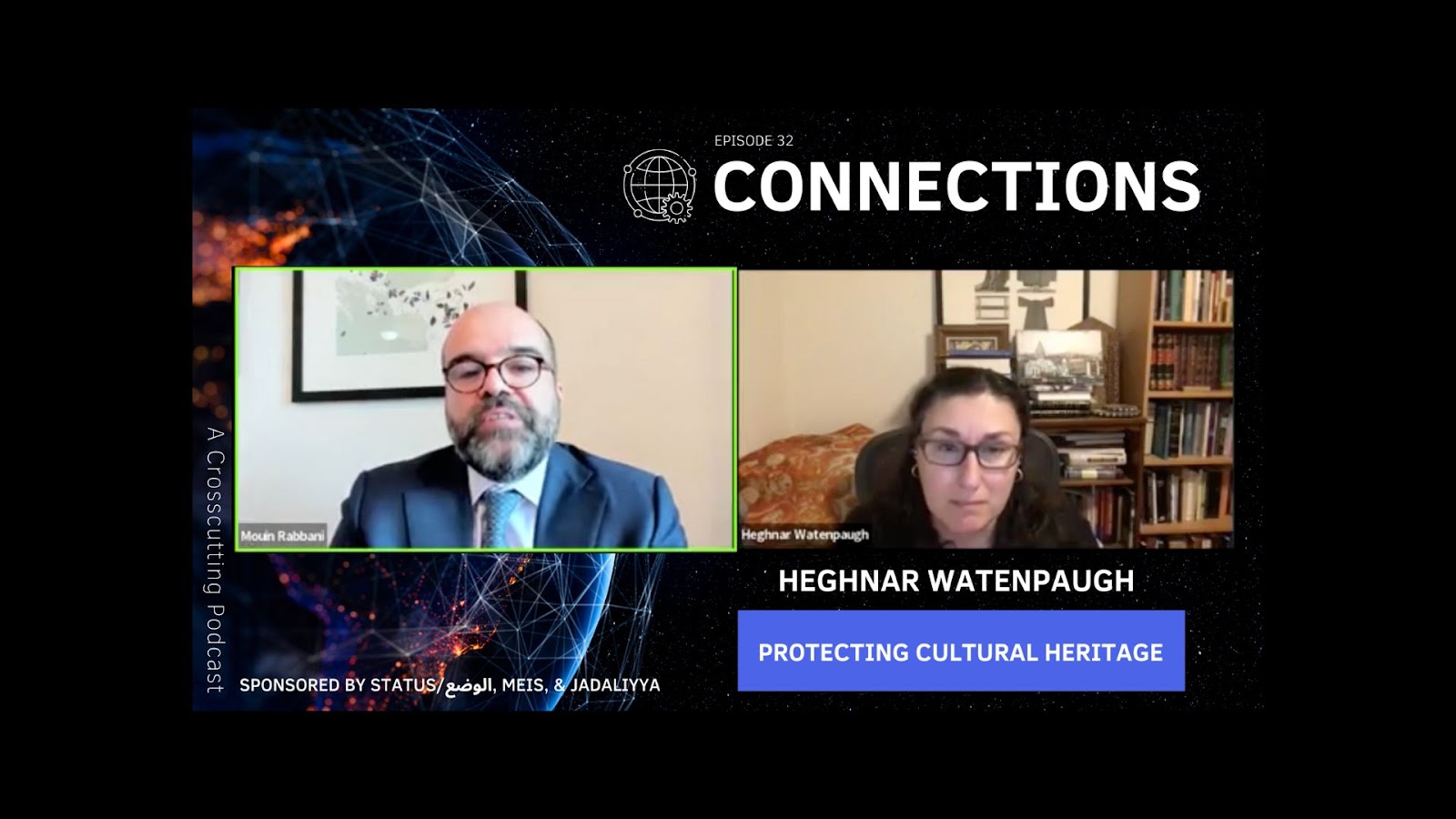 The ever-impressive Mouin Rabbani has released two new episodes of the Connections Podcast, where he discussed with expert guests the matters of protecting cultural heritage, and the struggle for human rights in the Middle East.

Mouin spoke with author Heghnar Watenpaugh about the rights and responsibilities involved in the protection of cultural heritage, as well as the challenges in preserving threatened heritage using examples from Armenia, Syria, and elsewhere. 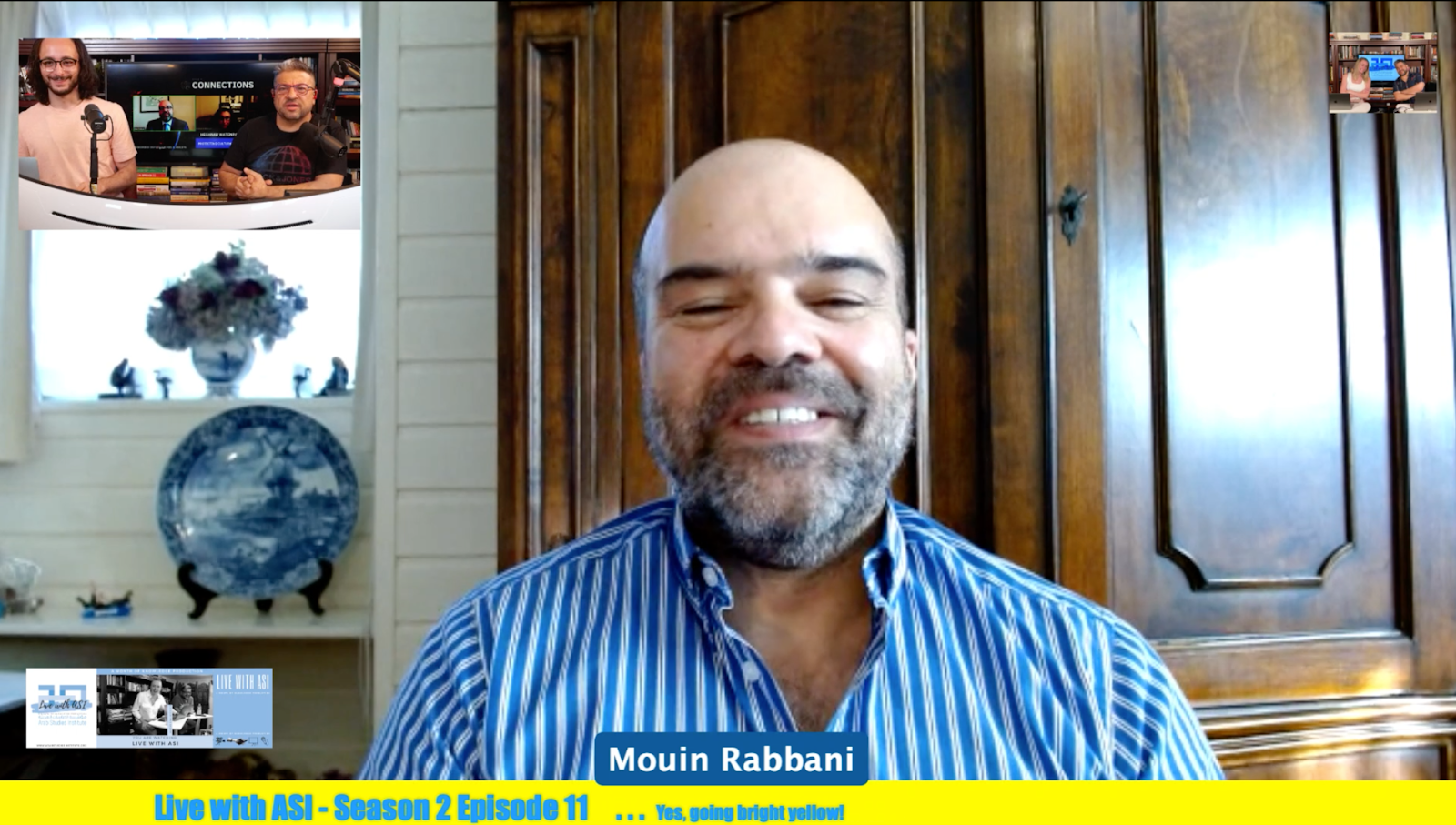 Jadaliyya Co-Editor Mouin Rabbani describes the three most recent episodes of the Connections Podcast and offers a sneak peak of what’s to come.

The Political Ethics of Sanctions: Lessons from Iran and Iraq 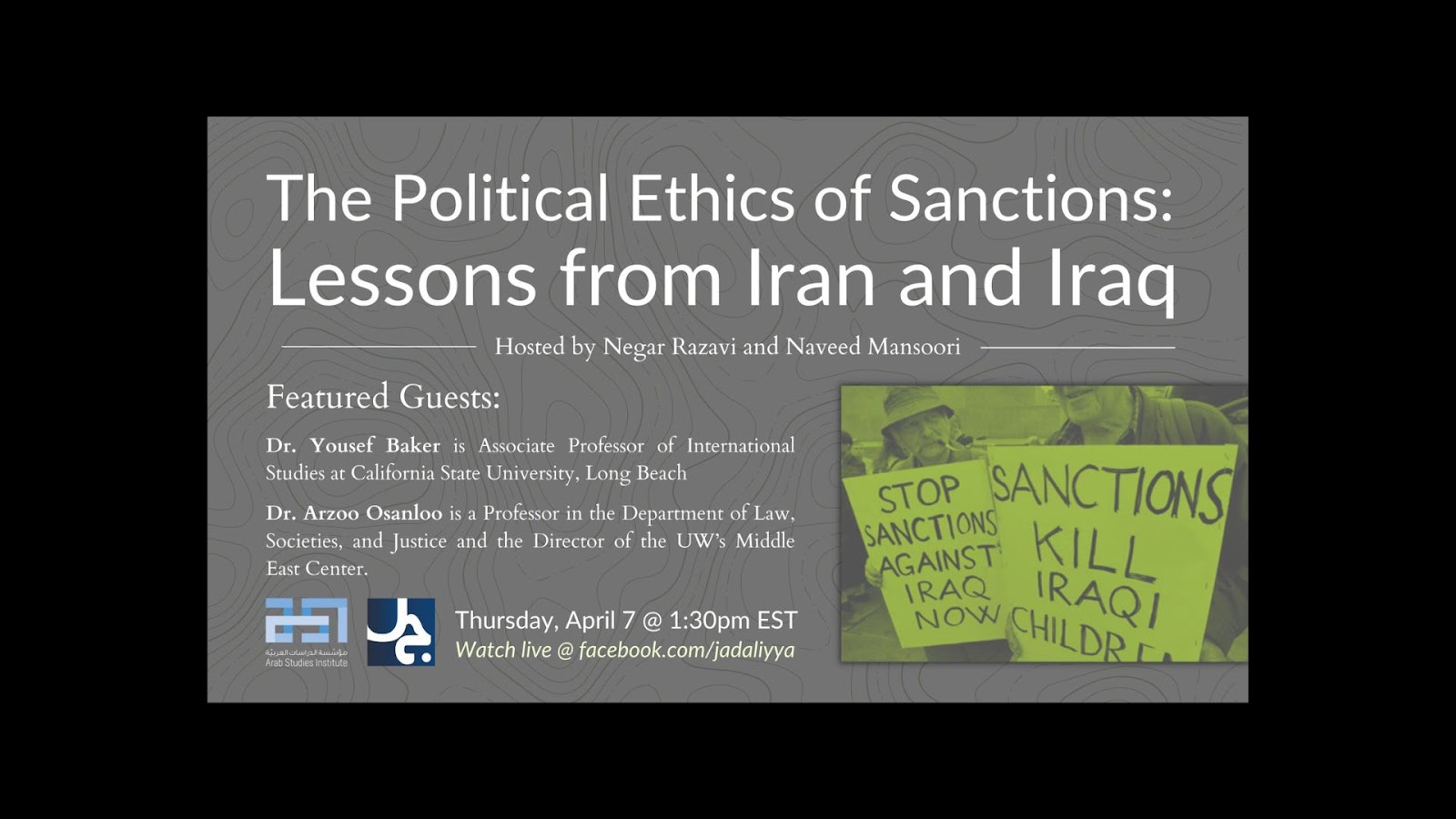 Jadaliyya and ASI put on a panel last month titled, “The Political Ethics of Sanctions.” In the wake of sanctions placed on Russia in retaliation for its invasion of Ukraine, the panelists looked to the cases of Iraq and Iran for lessons on the history and impacts of Western sanctions.

Their discussion addressed the common assertion that sanctions are a peaceful alternative to warfare, and interrogates what it even means to say that sanctions “work.” 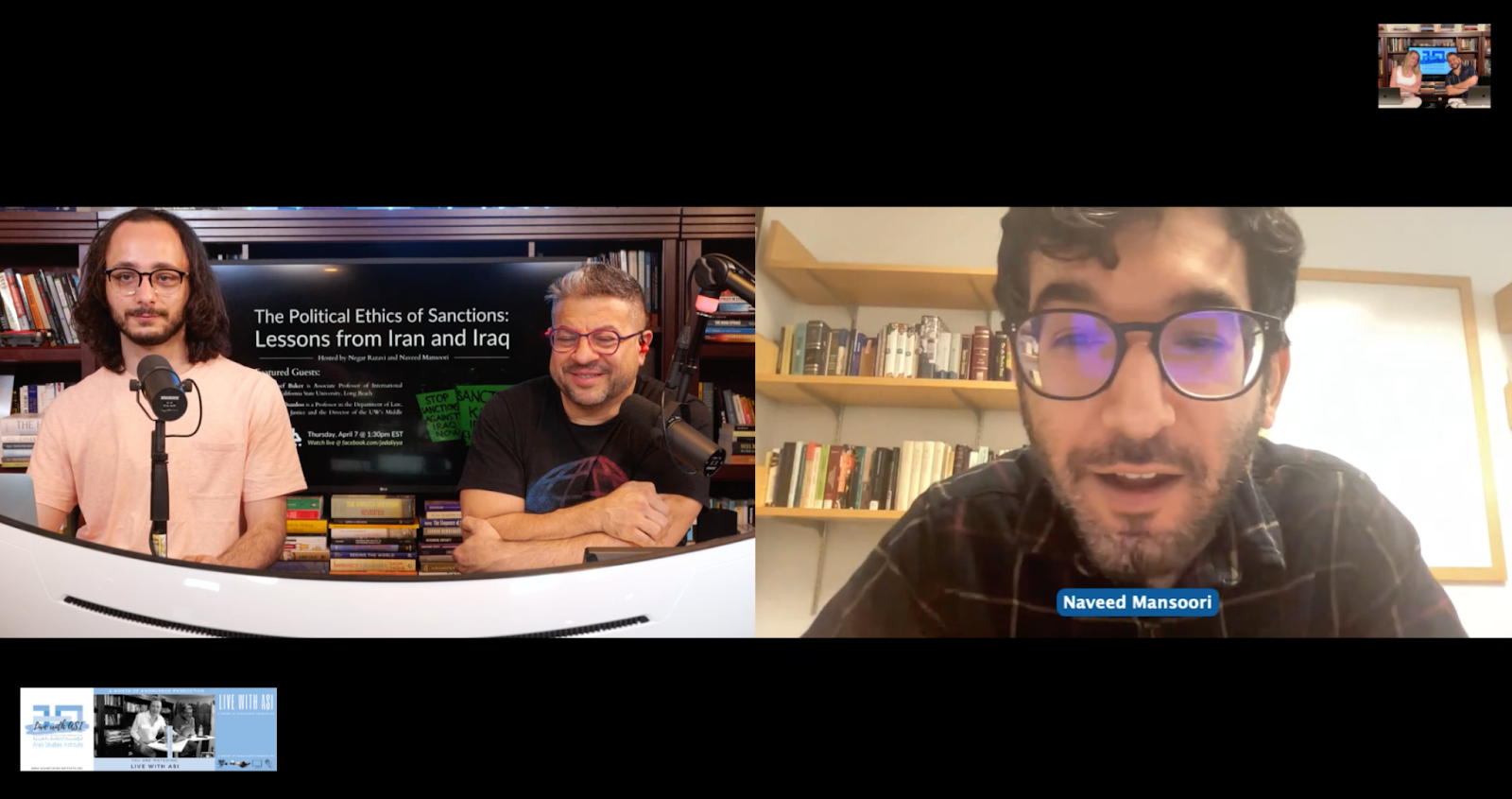 Jadaliyya’s Iran Page Co-Editor Naveed Mansoori discusses the nuances of sanctions-related discourse offered in the recent panel analyzing the impact of sanctions on Iran and Iraq.

We are delighted to share that Jadaliyya’s Environment Page is now two years old! Launched on Earth Day in 2020 with a bouquet of stories and a mission statement that emphasized the need for critical perspectives which did not treat the environment as an apolitical question. The Environment Page has been working diligently since then to provide readers with critically engaged resources on the various dimensions of the environmental question in the region.

Over the past year, the Page has published seventeen stories—both written work and podcasts—in both English and Arabic, focusing on themes of race and the environment, climate change and disasters, scarcity narratives, the built environment, and environmental knowledge-production. 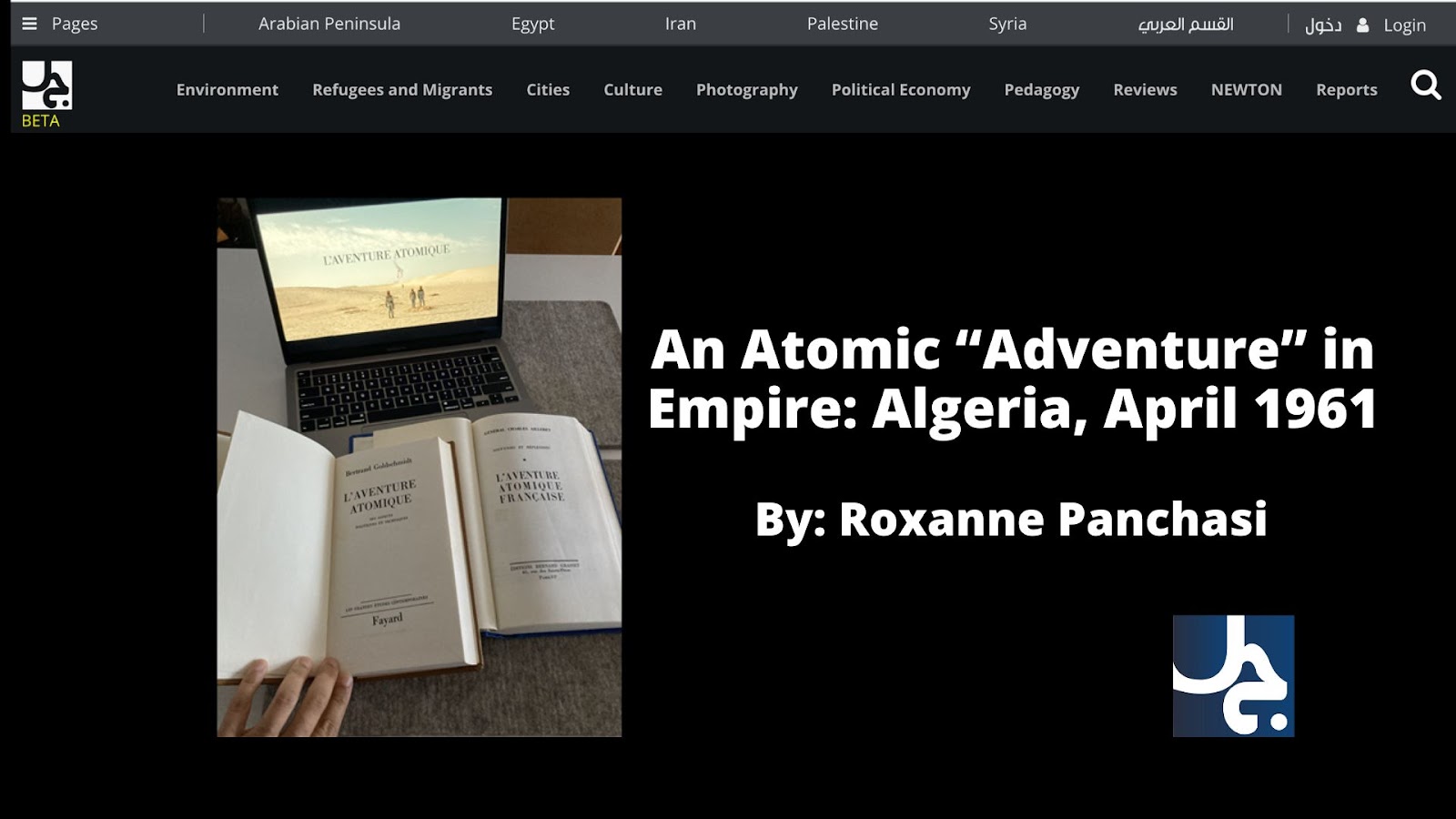 This article by Roxanne Panchasi is titled “An Atomic ‘Adventure’ in Empire: Algeria, April 1961.” The article describes the history of the last atomic denonation in a series of the French bomb experiments in Algeria after World War II. The stories that have been told about the bomb testing have highlighted it as chapter in French technological history. But, this article speaks to how the nuclear imperial campaign left a painful legacy for Algerians. 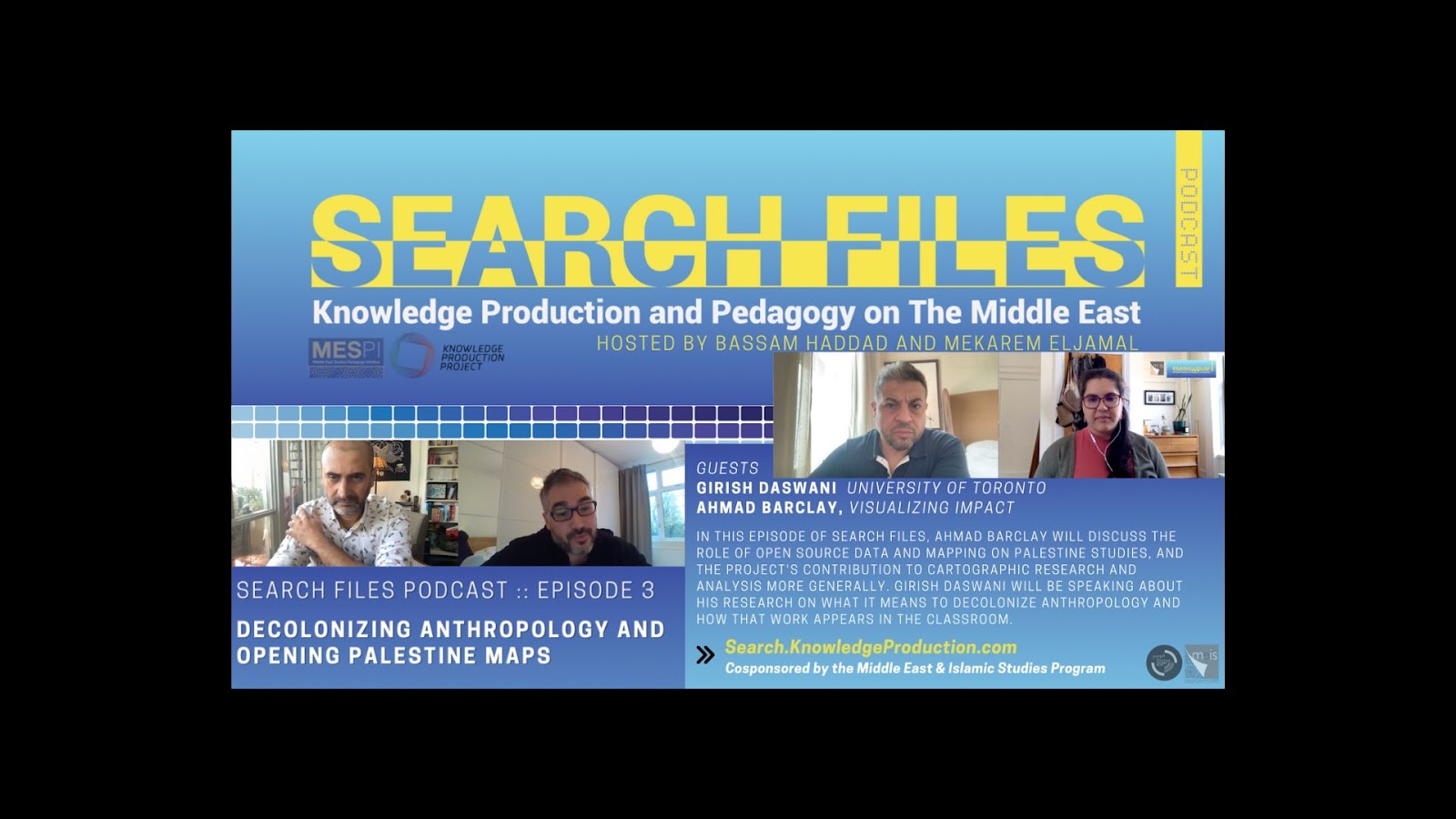 There is a brand new episode of the Search File Podcast available! For those that don’t know, Search Files covers trends in knowledge production and pedagogy on the Middle East and North Africa based on a constantly evolving dataset and pedagogic research, and brings together members of ASI’s Knowledge Production Project and the Middle East Studies Pedagogy Initiative to converse with experts, educators, and faculty from industry and academia.

In episode three, titled “Decolonizing Anthropology and Opening Palestine Maps,” myself and Managing Editor of MESPI Mekarem Eljamal spoke with Ahmad Barclay and Girish Daswani discussed the role of open source data and mapping on Palestine studies, and what it means to decolonize anthropology and how that work appears in the classroom.